Blowin’ in the Wind

The main inspiration for my final project is how to harness low-tech and digital fabrication technology to create sustainable energy solutions for off-grid systems and stand-alone devices.

Advancements in the field of microelectronics have not only miniaturised wireless devices but have also decreased their power requirement by an order of magnitude. This project aims at looking to ways we can power these devices sustainably by harnessing one of natures most ubiquitous and powerful forces: wind.

My Final Project will focus on building a small Vertical Axis Wind Turbine (VAWT). In specific, I decided to focus on the Savonius design, which is a model of vertical axis turbine invented by Finish architect and inventor Sigurd Johannes Savonius. Of course there are many different designs of wind turbine out there, the main two other ones are Darrieus and Horizontal Axis.

The physics of wind is essentially the physics of kinetic energy. This is calculated by half x the mass x velocity squared, or:

The mass flow of particles is equal to the density of the air (\(\rho\)) x the swept area (A) of the turbine x the velocity (V) of that air. This is calculated as:

The most important point in this equation is the velocity. Here below if we graph this we can see that the power of the wind is exponential, or cubically related to the wind speed.

So as we increase the wind speed we get a lot more power. So far so logical, right? What this tells us is that at low wind speeds, regardless of your turbine design, generator or whatever, there is very little power, therefore very little electricity to be generated.

Converting any form of energy into another, in this case kinetic energy into mechanical then into electrical, will incur losses.

According to Betz’s Law no turbine can capture more than 16/27 or (59.3%) of the kinetic energy in wind. The factor 16/27 (0.593) is known as Betz’s coefficient. What this means is that as wind speed slows from losing energy by moving a turbine, the airflow must distribute to a wider area. As a result, geometry limits any turbine efficiency to a maximum of 59.3%.

So anyone telling you they have 100% efficient turbine, tell them you betz they don’t have a clue what they’re talking about.

The Savonius turbine is one of the simplest of vertical axis turbines. Aerodynamically, it is a drag-type device, consisting of two or three “scoops”. Because of their curvature, the scoops experience less drag when moving against the wind than when moving with the wind. The differential drag causes the Savonius turbine to spin albeit at a slower speed than other designs.

Because they are drag-type devices, Savonius turbines extract much less of the wind’s power than other similarly-sized lift-type turbines. Much of the swept area of a Savonius rotor may be near the ground, if it has a small mount without an extended post, making the overall energy extraction less effective due to the lower wind speeds found at lower heights. 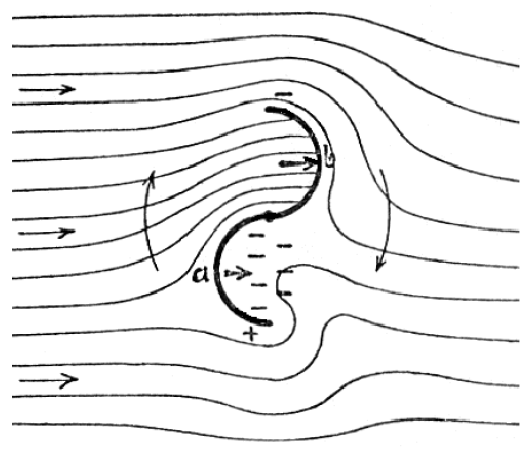 There are of course numerous and fascinating variations on this concepts, for example this helix design: 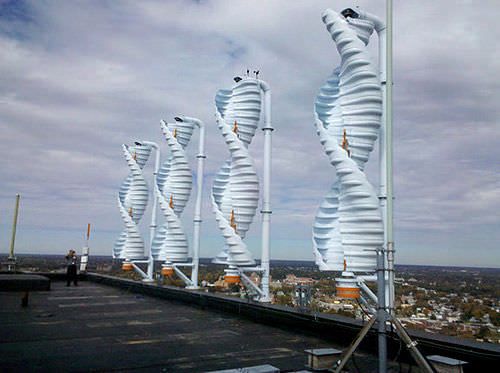 Vertical-axis wind turbines (or VAWTs) have the main rotor shaft arranged vertically, which means unlike their horizontal-axis cousins they don’t need to “point” into the wind to start spinning. Also VAWTs have their gearbox or generator placed near the ground making it easier to access for maintenance.

VAWTs offer a number of advantages over their HAWT brethren.

They also have some important disadvantages:

By definition, Power is the rate at which work is done and Energy is the total amount of work done over time.

Electrical power (measured in Watts) we get by multiplying Volts times Amperes. W = V * A This may be familiar to anyone who has tried to make sense of their electricity bill as we are usually charged for the energy consumed, which is expressed in watt-hour.

Power is Energy divided by Time. In this case: WH / Time. Conversely, Energy is Power multiplied by Time.

What matters for our wind turbine is what is called Usable Power. Usable Power is power that you can use to run your appliances or charge an energy storage system.

The main goal of any turbine is how to maximise the power that the generator is producing from the wind - or natural forces. The second challenge is to transfer the energy produced to an energy storage system (batteries) to be able to use it when there little/no wind. Transferring this energy, and the rate or power at which it is transferred, is the job of a charge controller.

The basic idea is that you need enough Volts (pressure) required by your storage system (batteries) and enough current (flow) to recharge your system faster then you are discharging your system.

Many of us may remember playing around with magnets and coils in physics class to explore the principles of electromagnetic induction. Faraday-Lenz law of induction basically shows us that we can induce current by creating a change of magnetic flux through a conductive loop (Faraday). As a consequence of conservation of energy applied to electromagnetic induction (Lenz) and this tells us the direction that current will flow. This is usually summed up as:

What do we need to power?

There isn’t much being designed for small wind generators because they do not readily produce much usable energy.

However, this project aims to generate the minimal amount of power to charge a few 3.7 volt lithium battery cells to run a simple microcontroller board, possibly some LEDs and LCD screen. The goal would be to see if one can possibly power a USB charger.

The ideal is to have a generator optimised to your average wind speed and rotor design, but this takes a lot of testing. There are also many possibilities available to 3D printing mini generators, and if I can get a prototype design working I would like to test some out. Here is a great article on wind turbine efficiency. 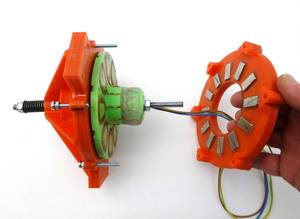 For rapid prototyping purposes, more than concentrate on the efficiency of power generation (next level of complexity) I am interested to get a prototype wind generator working to power a microcontroller (fabduino board) and then see how I can improve on that.

More than generating power a project like this needs to effectively store power using a battery bank. Your basic off grid power system usually looks something like this: 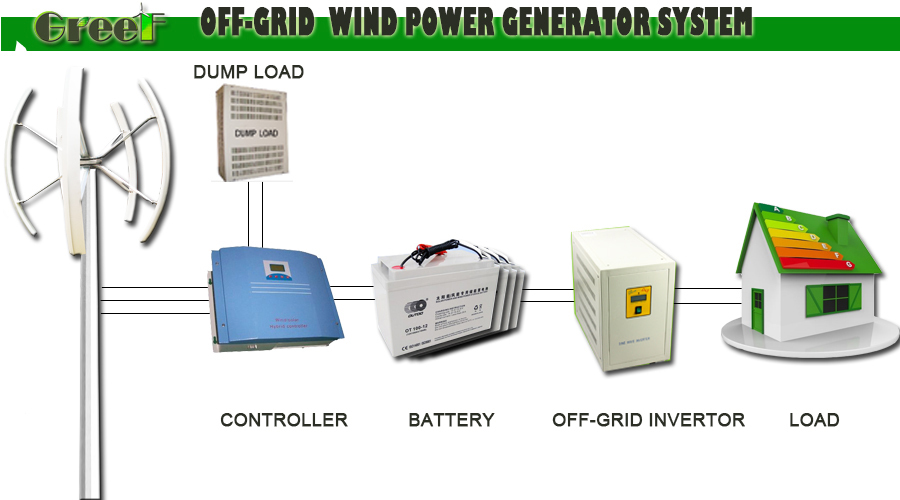 Basically, the AC power being generated from the turbine needs to pass through a rectifier. This converts alternating current (AC), which periodically reverses direction, to direct current (DC), which flows in only one direction, something like this:

Ideally this then goes to charge controller, or voltage regulator. This limits the rate at which electric current is added to or drawn from electric batteries by:

These are typically stand-alone devices. This is a solar charge controller:

Simple charge controllers stop charging a battery when they exceed a set high voltage level, and re-enable charging when battery voltage drops back below that level. However, using the power of affordable microprocessors we can now use Pulse width modulation (PWM) and maximum power point tracking (MPPT) algorithms to extract the maximum available power from either photovoltaic cells or a generator so make sure they operate at the most efficient voltage (maximum power point).

Many of the DIY charge controllers I see using the AVR platform are typically focused on solar power, which is dependent on the photovoltaic capacity rather than the more erratic, and variable performance of a wind turbine. But here is an example of an Arduino nano being used as a charge controller:

Inspired by Earthship Biotecture principles, of the interest of this project is getting the chance to prototype a VAWT using recycled or up-cycled materials such as, yes, bicycle wheels! As a main goal, I would like this project to be a mini fabbalble wind generator that can be built anywhere, and possibly scaled. Here is a great example by Aromal Karuvath, who made his own DIY jungle version.

Apart from off-grid homes, there is a wide range of uses for VAWTS and I am inspired by this particular company in Iceland (ok a very windy place) that is using them to power bus stops and network communication antennas all over the island.

Far from attempting to make any highly efficient, kilowatt generating turbine, this is an investigation (and crash course) in how to generate small-scale renewable power in a FabLab. I haven’t got round to adding comments to these pages (coming soon), but I really welcome questions, feedback, comments, tips and tricks if you feel like contacting me.

* For all you phd spark wizards out there, it will be obvious that I have no formal background in power electronics or engineering. This project is the fruition of my own research, learning by doing, and inspiration. I have documented my progress throughout, always linking my sources and giving credit where it’s due. Shout out to the fab instructors, maestros and open-source community in guiding me on this wild and windward journey. Notable mentions to:

And last but not least all my FabAcademy crew for their fun, humour and creative support along the way. Keep creating, keep curious.

"we stand on the shoulders of giants"