The goal of this week is to create a wired or wireless network connecting at least two processors. But first some theory:

Networks are used for many reasons. The most obvious one is location: getting devices to speak to each other across distances. But equally important is the concept of parallelism. This is where a complex system is broken down into individual tasks that are managed by separate processors, effectively creating a multi-core architecture.

Take for example, a big machine than needs to control various axes, a user interface, and an end effector. Rather than having a time-sharing operating system on a big processor, you can split the various tasks between multiple small processors running parallel to each other. This sort of architecture can greatly enhance control and flexibility.

Another benefit of this is modularity. If each task is controlled by separate processors, this helps us develop and debug each module individually before integrating them. Also the machine/device/system may have one part that uses high current, another that is low noise, one at high voltage; which may cause interference between components. So by having a modular network you can avoid interference, and separate the sub-systems accordingly.

This week I want to focus on the most basic form of communication used to interlink circuits: Serial Communication. Then if I have time I will try and play a bit with 12C and wireless.

Serial interfaces stream data one bit at a time, kinda like a two-lane country road where traffic is slow (only one car in each direction) but it’s a cheap and steady ride. Parallel interfaces transfer multiple bits at a time often requiring multiple wires, like a superhighway. It’s fast but means more lanes to build using more processor pins.

Asynchronous: who got the time?

The are dozens of serial protocols that have been developed over the years to meet the different needs of embedded systems. These include Universal Serial Bus (USB), SPI, I2C to name a few that Neil mentioned in his lecture.

The most common form of serial is asynchronous serial communication, which means that data is transferred without support of an external clock signal. This allows digital pulses to be sent back and forth between devices at a mutually agreed-upon rate. The sender sends pulses (representing data) at the agreed-upon data rate, and the receiver listens for pulses at that same rate. Simple right? Hmmm…

The important thing to remember is there is no one way to send data serially. The protocol is highly configurable. This makes it critical to make sure that both devices on a serial bus are configured to use the exact same protocols.

In order to communicate, the devices need to agree on a few things:

A few rules of the road:

A Serial bus consists of just two wires: one for sending data and another for receiving. As such, serial devices use two serial pins: the receiver (RX) and the transmitter (TX). 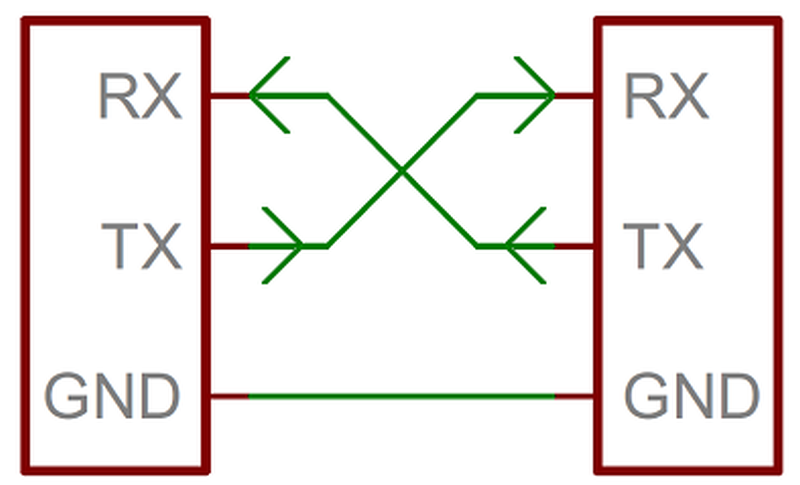 I redesigned Neil’s board layout below, keeping the RX and the TX between the bridge and the node’s are lined up to the same pins (PB3 = TX and PB4 = RX). This was at first confusing, until I understood that it was in Neil’s C code that the inputs and outputs of the pins are switched.

I didn’t get too adventurous this week on my electronic design. This is because 1. I wanted to keep things simple, and 2. I was anxious to delve into the programming of a serial bus, understand a little more about the actual wiring of a serial bus and work out how to manipulate serial via the software.

Here I am using the FTDI to provide power and ground while the ribbon cable is communicating via serial.

For the programming I worked with Neil’s C code. For each node in your network, I had to modify the hello.bus.45.c C code. The “bridge” board with the FTDI header is also technically a “node”. Each node needs to have a different node ID number (0, 1, 2, 3, etc) In the c code, you need to change the line: #define node_id '0' and then save the file.

Next, I modified the C code again and change the node id to 1 and svae the file.

Then I repeated this process for all the boards.

Also it is a good idea to physically write the number of your node on the back of the PCB with a magic marker to not get your nodes confused.

The programming went fine, so now on to testing the serial bus communication. Here I used the Arduino IDE serial monitor, making sure I had it set to 9600 baud rate.

From the get go I seemed at first to have a problem with node 1. But this was very hard to tell because the LED’s flash all 3 in quick succession, before flashing the one called.

Then what I did was change the code, and reprogrammed the board this time using my fabISP that seemed to work fine. What I did was voided the flash at the beginning. This allowed me to see in effect that I had a problem with my node 1:

As you can see here below, the LED now only flash to the node that is called. 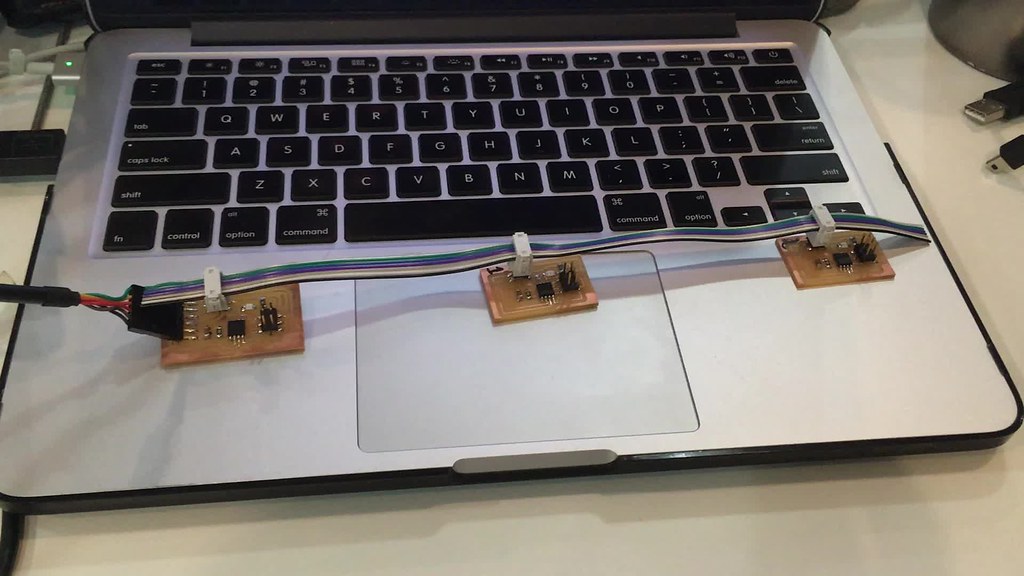 After a lot of trouble shooting and back to debugging, I foundout that the problem was with the LED which may have burnt out on my node 1. I will try changing it to see if I can get it to work.

Serial communication is really a quite simple two way communication. With my limited coding skills, I am still trying to figure out how it is that one sets defines which board is transmitting and which board is receiving. I understand the theory, but in coding practice this still escapes me. I will update my findings.

You can download all my design files for week 14 from my Gitlab repository.