Assignment: Read a micro-controller data sheet. Program your board to do something, with as many different programming languages and programming environments as possible. For extra credit experiment with other architectures.

There is often some confusion between these two, which I will try to clarify:

Here is the ATtiny44 (enlarged, it actually is teeny!) which we will be programming this week: 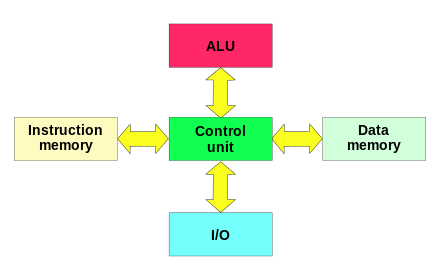 As we will be learning to program AMTELS AVR family of micro-controllers, these use the Harvard architecture with RISC (Reduced Instruction Set Computer) because it is better for real time performance. RISC-based systems generally have lower cycles per instruction (CPI) than a complex instruction set computer.

AVR (which is now owned by microchip) is only one of many family of processors, but there are a few reasons why we are using the AVR family for FabAcademy:

Here is the ATtiny44 pin layout:

The ATtiny44 is a low-power CMOS 8-bit micro-controller based on the AVR enhanced RISC architecture. These tiny little brains are actually quite powerful, and as Neil says none of the software in the world will make any sense until we understand how the hardware works. So lets dissect the Attiny44: 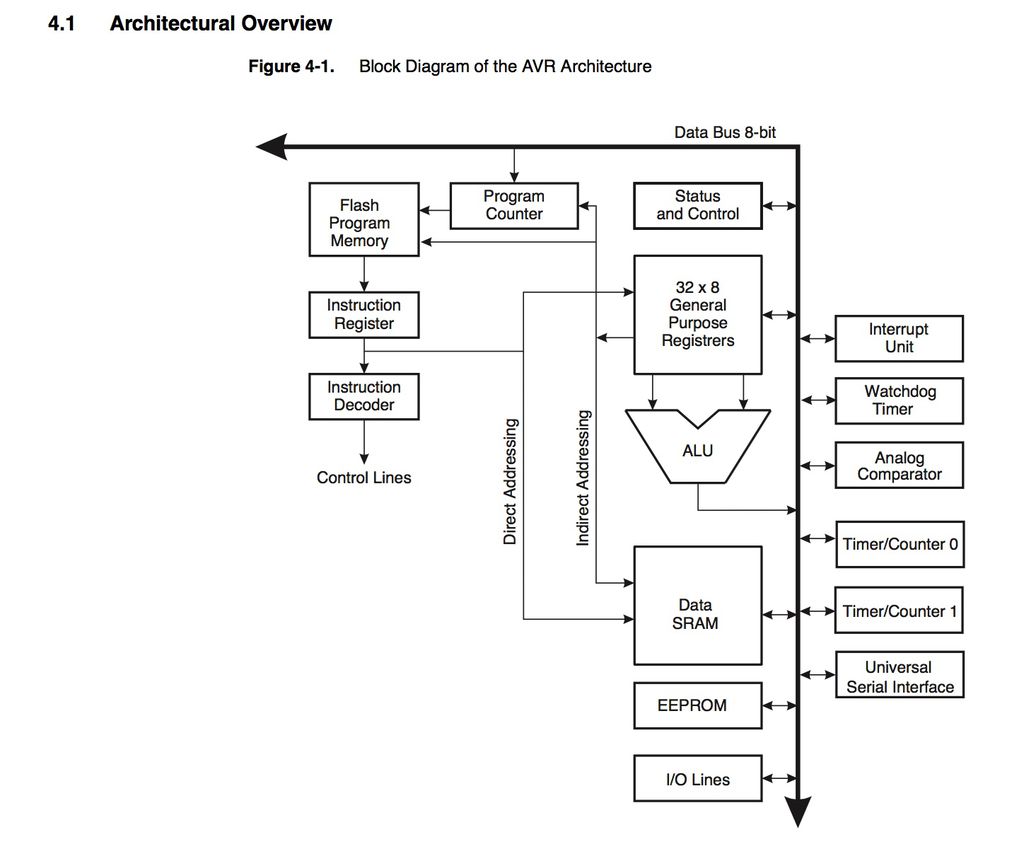 First of all some basic specs. The ATtiny44 provides:

The AVR Architecture has two main memory spaces, the Data memory and Program memory. In addition, the ATtiny44 features an EEPROM Memory for data storage.

So in a nutshell we have:

These are all essential for controlling lights and motors.

USART and USB communicate to the outside world.

Attiny is an 8 bit processors.

In computing, a word is the natural unit of data used by a particular processor design. A word is a fixed-sized piece of data handled as a unit by the instruction set or the hardware of the processor. The word size or number of bits in a word (most embedded MCUs use 8, 16, 32 or 63 bits) is an important characteristic of any specific processor design or computer architecture.

ISP stands for In-System Programming just incase. Back in week 5 we made our own FabISP programmer, which is basically a ATtiny44 micro-controller setup to load programs into other micro-controllers. Which begs the question, who programmed the first micro-controller? But I digress…

So how does this work? The computer tells the FabISP via a USB connection how to load the program, it gets transferred into the board I am going to program via the 6-pin ISP header. 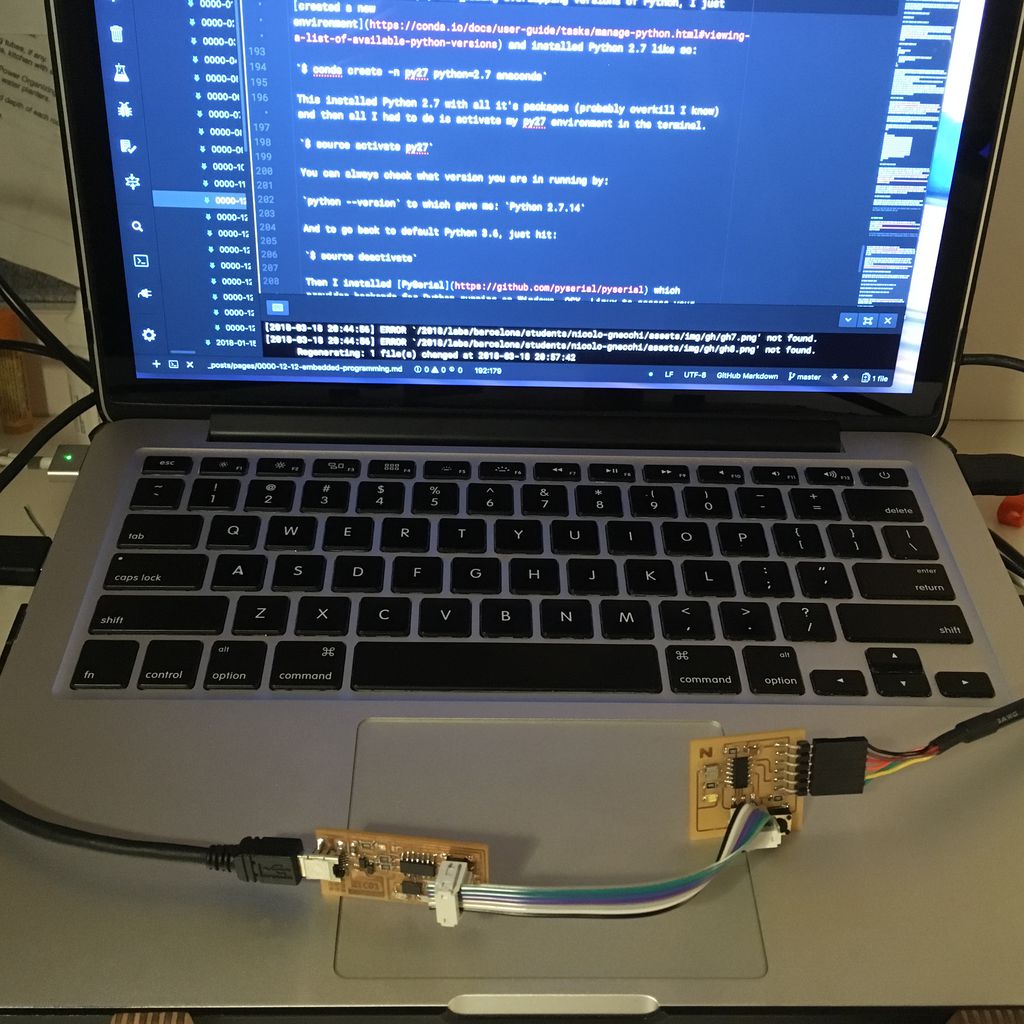 Typically we are gonna use the ISP header to program the board but there are many ways to do this.

To load the program you need a programmer.

Here I did a blink test with the Arduino IDE using the Port Direction Registers I found here: 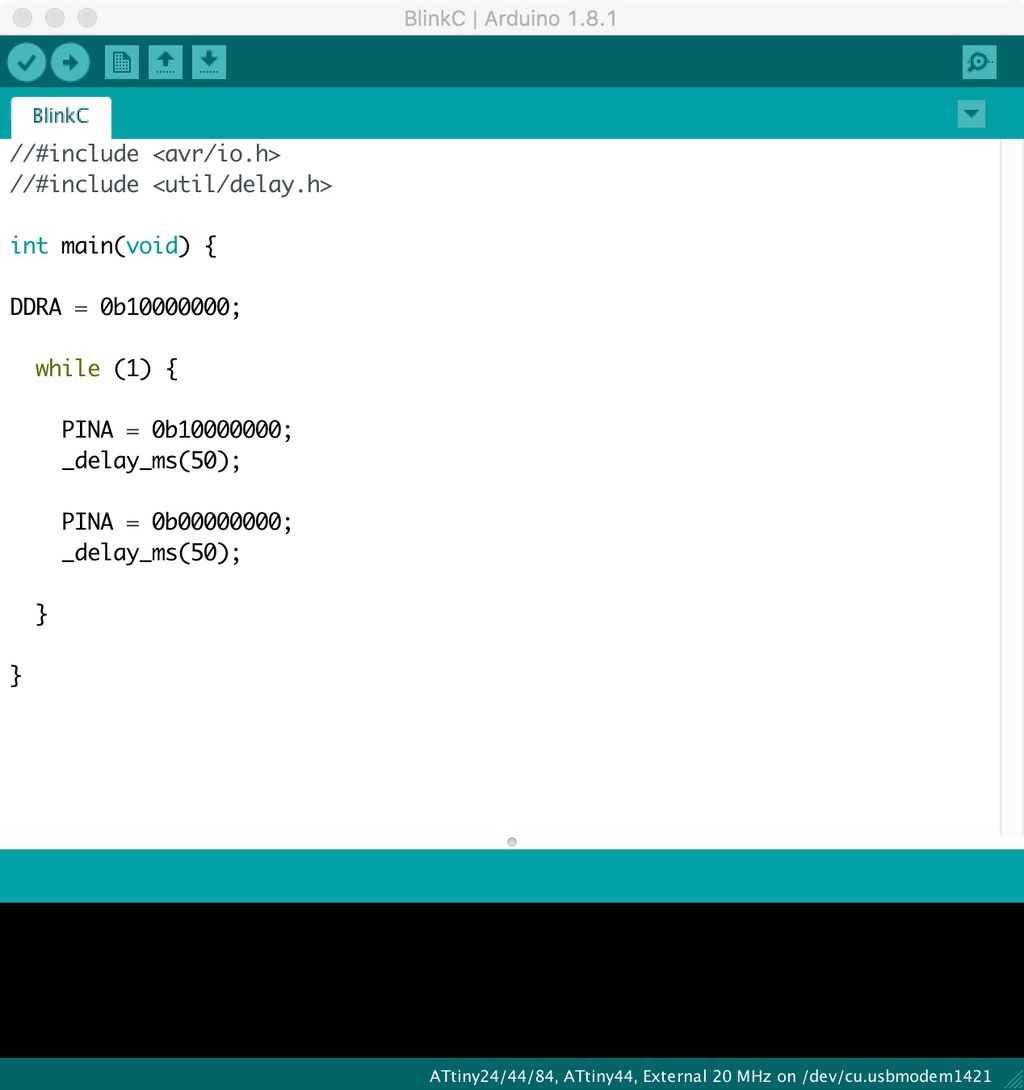 Leaving registers aside, programming the Attiny44 via Arduino IDE is very stragihtforward. HigTechLowTech has a very easy tutorial on how to install the right libraries and configure the Attiny to run at the correct clock speed.

C is basically a general-purpose language that we are using in FabAcademy to program our micro-controllers. It is straightforward to compile, provides low-level access to a processor’s memory, and maps efficiently to machine instructions. As you can see from this graph, there is a huge difference in speed performance between a RaspberryPi running in C and the same one using Python.

Here is Hello World in C.

For all this magic to work we need to install AVRDUDE which for all you Macphiles comes included with CrossPack which I installed back in week 5 to program my FabISP. CrossPack contains GCC an open source compiler, a C library for the AVR, the AVRDUDE uploader and several other very useful tools.

Hex looks something like this, and if I am not mistaken each character represents an 8bit unit unit of 1s and 0s. Shall I compare thee to a summer’s day?

Since I had already programmed the Hello Board from week 7 to blink using the Arduino IDE, I decided I would test how my computer communicates with the board over Serial. For this I managed to program the Hello Board with the hello.ftdi.44.echo.c example provided by Neil using my FabISP programmer. He provides a cryptic little tutorial here.

Because we will be talking to the board via an FTDI cable, it was recommended that we install libFTDI which is an an open source library to talk to FTDI chips. Crazy right. For this the Homebrew package manager again to the rescue:

Then check to which USB port your board is connected with: 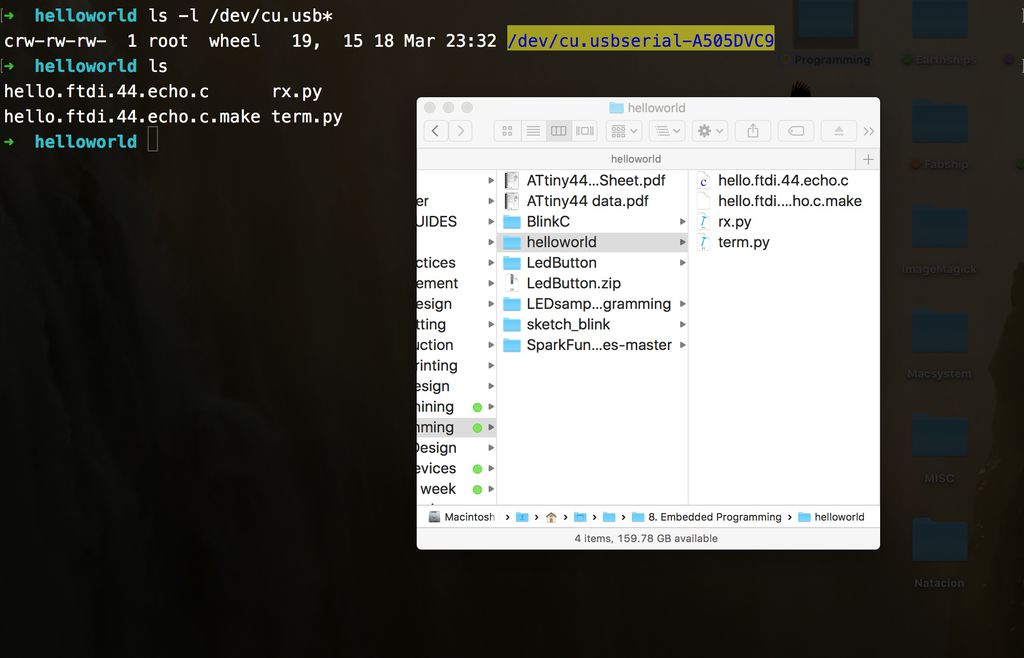 Then I hooked up my FabISP to the computer via USB, connected the ISP ribbon cable between the FabISP and my Hello World board using the two six-pin headers, and connected the Hello board to the other USB using the FTDI cable.

CHECK to make sure that the ground line (usually black) corresponds with your circuit ground connection like so: 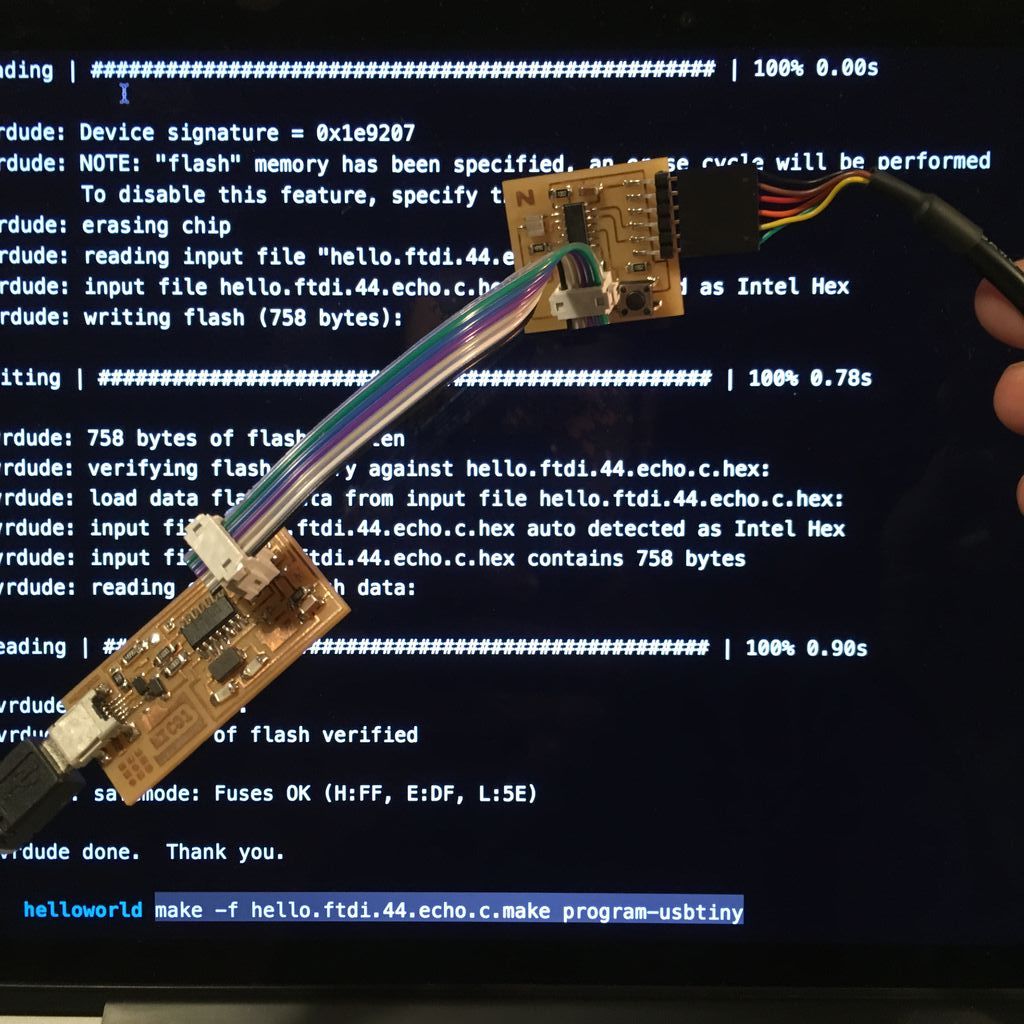 So to interface with between the Hello World board and the computer we are using serial communication and a sweet little term.py program Neil wrote in Python. The command for this is:

In the C code we can see that 15200 is the baud rate or speed we will be communicating with the host computer over the FTDI cable. And as we checked above, cu.usbserial-A505DVC9 is the USB port to which it is connected.

So here i started getting syntax errors, of the sort:

I initially thought was something to do with the code but actually on my Mac I use Python with the Anaconda open-source distribution and Conda package management. This helps keep all the various Python versions, packages and dependencies up-to date and easy to find.

Anaconda, however, runs on the latest version of Python 3.6 and this meant I couldn’t run Neil’s little Hello World interface he wrote it eons ago in Python 2.7. To avoid pip installing overlapping versions of Python, I just created a new environment and installed Python 2.7 like so:

This installed Python 2.7 with all it’s packages (probably overkill I know) and then all I had to do is activate my py27 environment in the terminal.

You can always check what version you are in running by:

And to go back to default Python 3.6, just hit:

Then I installed PySerial which provides backends for Python running on Windows, OSX, Linux to access your computers serial port.

So that done I could proceed with: 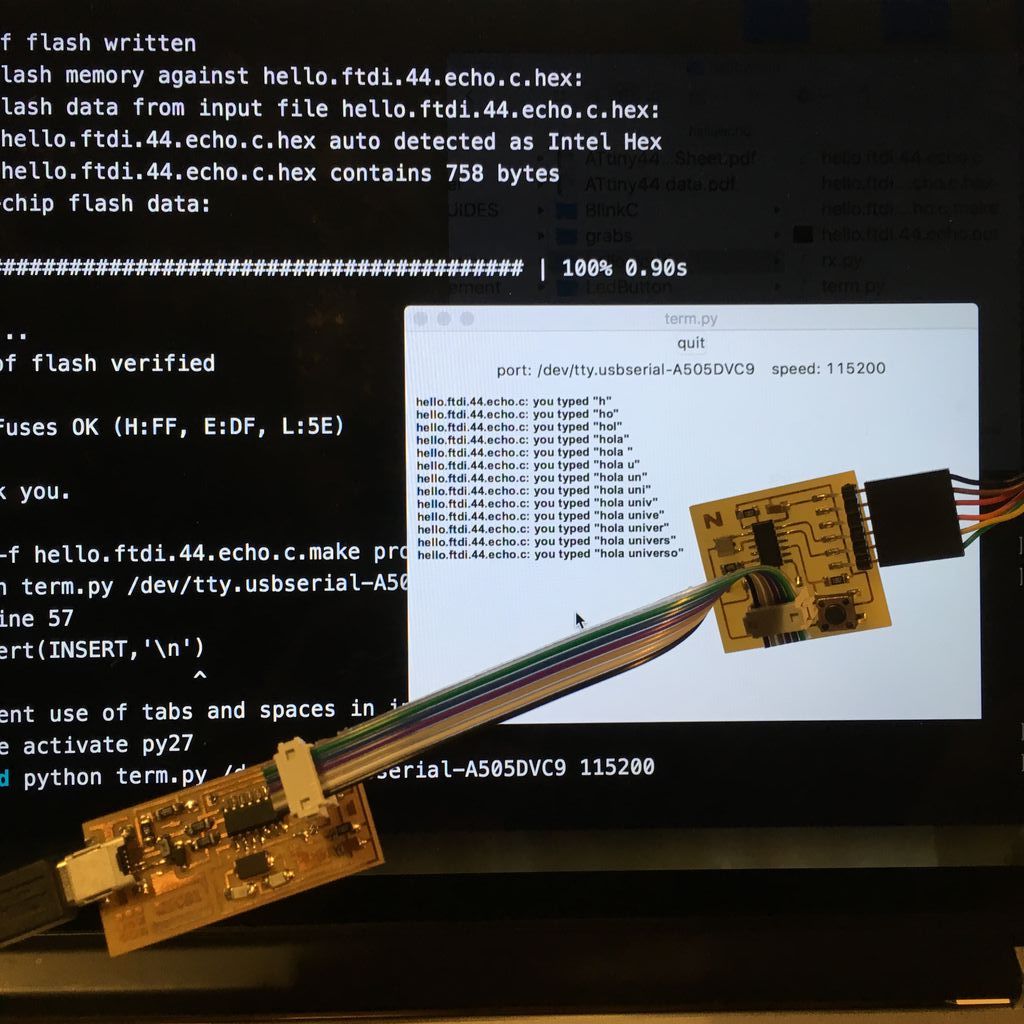 Blinking the Hello Board in C

This was a little more complicated, but I finally got it working. Here is the code below which I modified from Neil’s original Hello Board, changing a few variables for my input and output pins:

Here below is my main function:

Then I ran the programmer with: 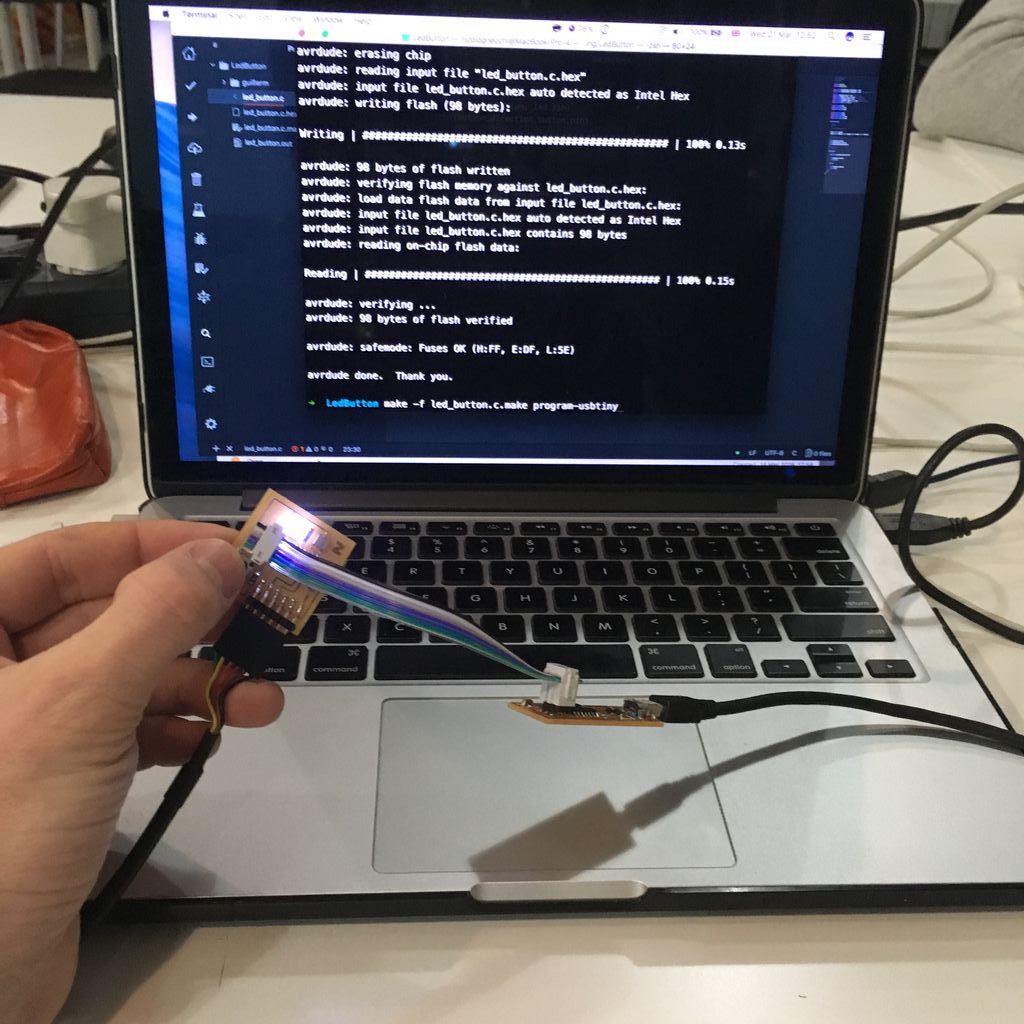 You can download all my C code files for week 9 from my Gitlab repository.