Read a microcontroller data sheet and program your board to do something.

To look the datasheet of the attiny85, you can look by using the summary of pdf file or just make a research using Ctrl+F. The datasheet is composed by this big parts :

For this week, I decide to try two IDEs to develop software for microcontrollers, the both of them are complete, you can check if the code compile, compile the code, upload it in the microcontroller, using averdude and you can have acess to serial monitor utilities. The first one is Arduino (the most common IDE for arduino community and makers in general), and the other one is vscode (it's the community opensource version of microsoft visual studio) integrate with PlatformIO.

I spend lot of time to understand why my FabISP doesn't working, and without fabISP, I need to deal with arduino as ISP. I try by all the ways but nothing to do it's not working. After all, we understood with the team in the lab, that you need to plug another alimentation to be able to program the board with the FabISP. So I used an FTDI board to alimente my FabISP. 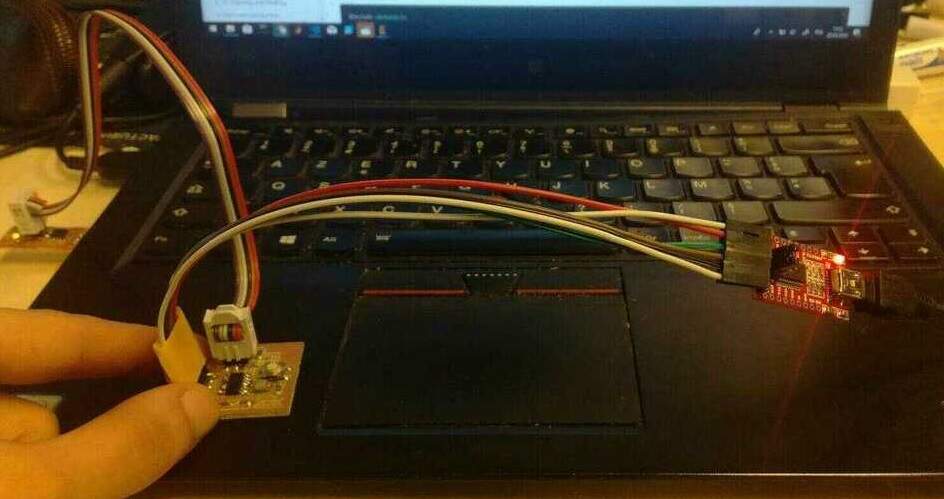 Furthermore, for windows users (like me), you need to install the usbtinyisp firmware if you want to visualze your fabisp.

They are few documentation online to understand and know how to use the Arduino IDE, in the context of the fabacdemy, you need to be sure that you have Attiny library installed in the IDE (how install arduino library).

Before to start coding (you can also do it before uploading code), you need to set some configurattions options:

I tell that it was not ergonomic, because of one things, in the side of baudrate selection, you can define if you want to add some special characters (\r, \n or both) when you sending message, and if you don't care about that, you can have some problem to decode your messages. By default, the value is set to Both NL & CR, I recommand to select No line ending.

Vscode is a famous IDE in the world of web software developer. Build by strong community, he has many extensions, and it can be used for almoast any language. One the thing that I liked with VSCode, is the integrated terminal, really usefull for debugging and task launching. The other side, PlateformIO, initially, based on Atom the opensource IDE of github, it was devlopped to support nodemcu boards, but he was extended after that for others platformes. 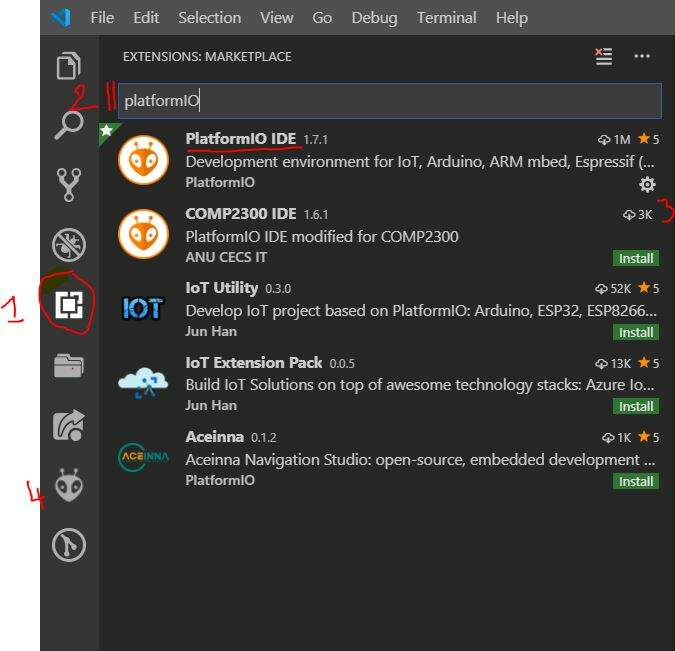 So here you can see one simple example of the plateformio.ini for an attiny84 with an external clock of 20Mhz.

The advantage of this system of configuration, is the possibility to have many configuration possible (develop, test, clocks, production), and switch easly between configurations. For more details, please, go there.

Use Arduino as ISP PlatformIO

Set the following variable in plateformio.ini:

To upload the code from the vscode and platforme io, they are few options, using the CLI of plateformio or using the command palette of vscode, or use the shortcut Ctrl+alt+U. 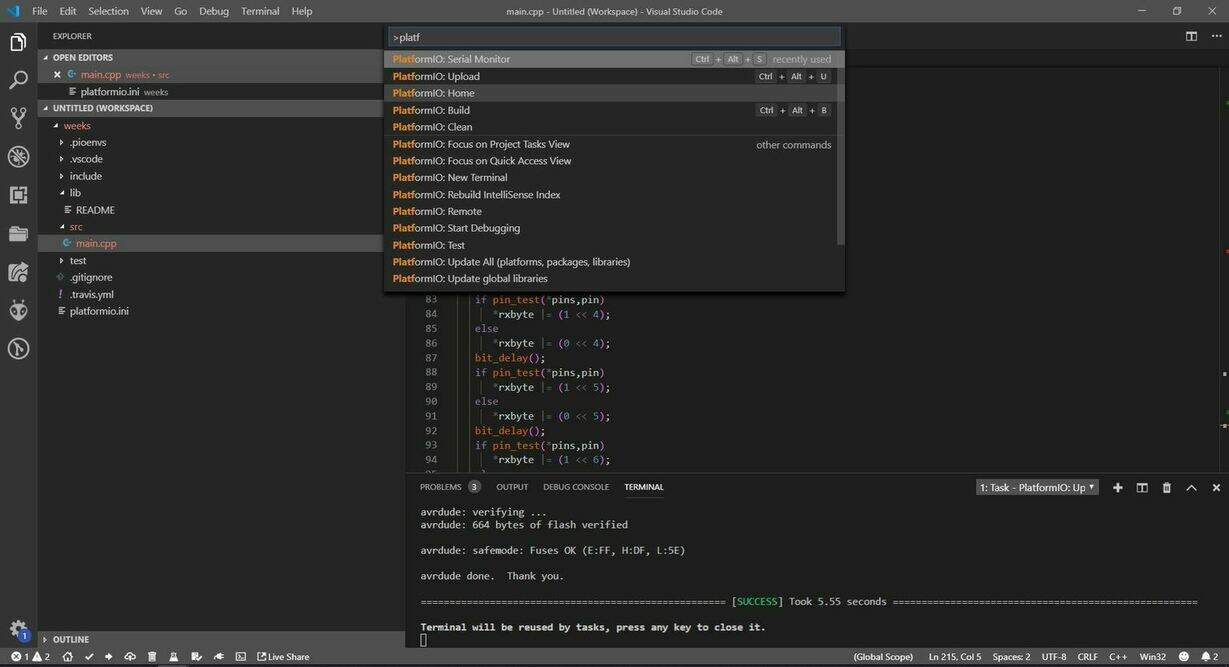 Arduino IDE is clearly more accessible for begginners, all is in the same place and all the principale configuration can be accessible from the user interface.Howeover, I think PlateformIO has many advantadge, the possibility to set many configurations, vscode IDE (many usefull shortcut and extension for code editing, and compatible with many languages). The disadvantage of Plateformio, is the pin naming when using the arduino framework, for example A7 pin in Arduino, will be not understable by platformIO, you need to specify PA7.

So I will use, vscode with plaformio for text editing, fuses board, upload pure c code, but I will use Arduino IDE to upload arduino codes and I will use his serial monitor more usefull for debugging, than my small bottom terminal.

Note: I'm in the finish of the fabacademy, and I understand one of the biggest frustration of my fabacdemy, the clock managing, I told that, the setting of clock in the settings of arduino, change the fuse mode, and I found that arduino IDE didn't do that, the settings of clock permit only to define the frequence of time in the arduino code, like when in the pure C we need to define the `#define F_CPU 20000000UL``for timer cycle. So now all my fuses update will be maid using platformIO

So for the programming, I maid two examples, one with pure C, I used the neil code to make an hello ftdi, and an arduino code to program an interrupter (click -> led on, click-> led off, serial monitor communication).

For this, example, I take the Neil code, I try to use it, I had many and many troubles, but in the end the problem was the fuses of board who was not correctly applied. So I checked what's going on if update fuses to internal 8 Mhz and set the variable F_CPU, and it's work for the both. 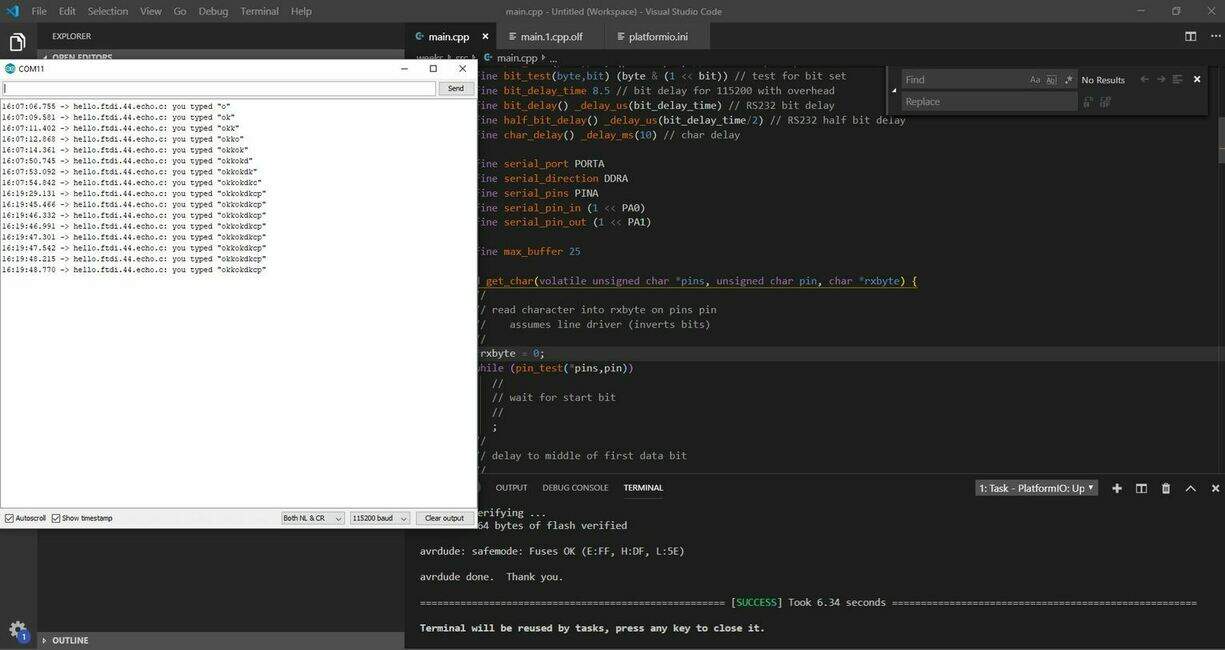 You can download the plateformIO project, just by clicking here.

When I try to get the serial output using the arduino IDE or PlatformIO, but in the two cases, I couldn't reiceve the communication. To be able to catch something, I need to use different baudrate in my serial software monitor.

To fix error, be sure that you correctly fused your board or set the right clock config.

Using the arduino IDE and Arduino framework, I programme my board to make a simple program to switch on/off the led of th board. The state of the led can be changed from the button or from the serial monitor. I put some commentaires to have code more understeable.

⚠️ The arduino code works only when I fuse the microcontroller for internal 8Mhz or internal 1Mhz and then I update the clock in the configuration (as describe on the top).

I had this problem with all attiny that I maid, the clock does'nt work, even for the final project, the only way that I find to be able to use them, was to use the internal clock of 1Mhz of the attiny84.

I try to understood why, but after some feedbacks, I think it's certainly because of attiny that we have. Because when I try to use the internal 8Mhz, it doesn't work also.

edit : I found the solution, it was fusing topic, for mere details, read on the top.