I left my board at the lab and I had to stay home throughout the duraiton of the embedded programming cycle as I had caught a cold. I therefore used tinkercad’s arduino simulator to test out the codes I had planned to use. I

The datasheet of any microprocessor is like a maze of information taken straight out of a nightmare, specially for someone with the attention level of a tea spoon. Furtermore, this information spreads across a large range of concepts of electronics and can become an obstacle to the laymen.

For this assignment, I have scrolled through the datasheet of the microprocessor I used for my PCB; the ATtiny 1614; and identified the information that is relevant to the work to be carried out for this week.

Details the voltage, current and temperature value ranges for optimal operation. This section also lists the power consumption of the processor and its peripherals under different contexts. Finally, here, one can also find programming and boot times.

This section specifies the properties of the different types of memories featured on the board such as their size and hex addresses. Moreover, information regarding the fuses can also be obtained here.

Provides information regarding the processor’s packaging, namely dimensions and thermal considerations. This is important in determining if a packaging will offer the desired protection from its environment while respecting the spatial constraints.

This section lists the base addresses of all peripheral modules (ports, configurators, controllers, timers …) and interrupt vectors. It also features diagrams of the board’s architecture.

The pinout section of the datasheet describes the information required to determine how to interact with the processor. It lists the function of each pin, their reference and the types of compatible signals. Below is a diagram that shows the aforementioned information for the ATtiny1614. 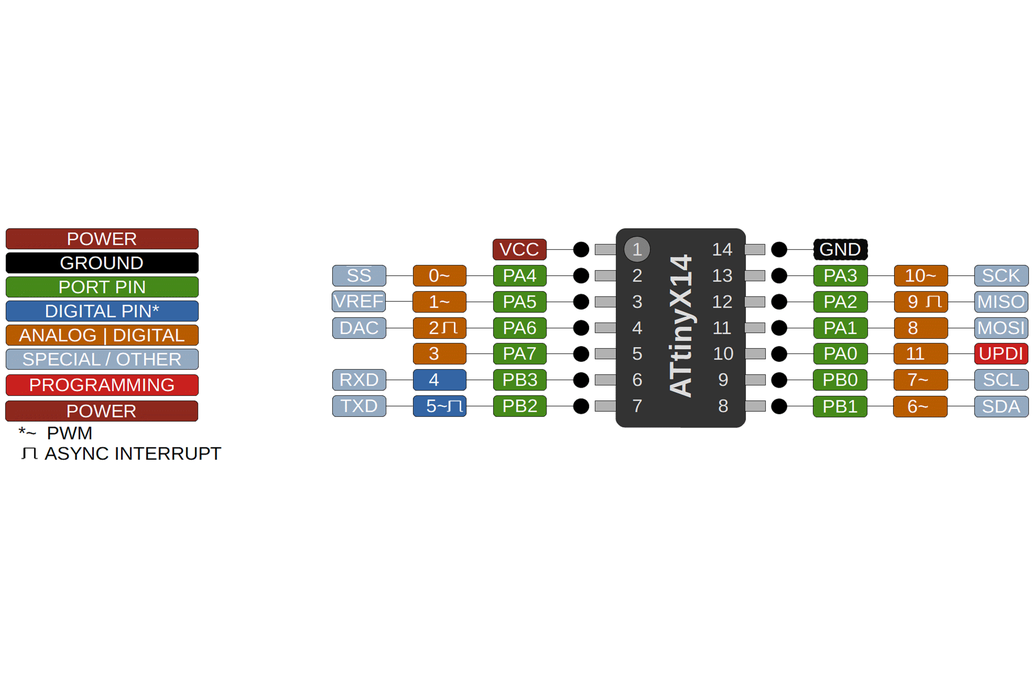 Using the above, I compiled a table containing the relevant characteristics of the ATtiny1614.

As mentioned in the sixth week’s documentation page, the board I had produced for the Electronics Design cycle did not work as intended. The main issue was that its logic gate circuit was not well thought out. As such, I have decided to update its design before moving forward with the rest of the assignment.

First of all, I had not checked the ATtiny 1614’s internal pin assignments. It was brought to my attention that I might have improperly connected the RxD and TxD pins as their location was not specified on the Kicad schematics, in which case it would be impossible to program the board through serial communication. As mentioned above, pin assignments can be obtained form the processors pin-out diagram, itself located in the unit’s datasheet. One thing to note regarding the data transmission pins is that the RxD (Data Reception) pins must be connected to the TxD (Data Transmission) pins of the opposing device, and vice versa.

The LED was already connected to a PWM pin.

Summary of changes made to the original PCB Design

Notes from the re-design

As mentioned earlier, I wasn’t able to go to the lab during this cycle. I also didn’t have enough time afterwards to produce the corrected board. I therefore programmed the board I had made for Week 6. The improper UART Pin configuration wasn’t be an issue as I was be programming the board through UPDI. However, I still corrected the connection using soldered jumper cables.

Setting up the Workflow

I only used Arduino IDE. I first had to install the ATtiny board library (megatinycore) in order to interract with ATT1614 I had installed. To do so, I followed the steps outlined on the megaTinyCore library’s github page. Once installed, I needed to select the board and programming sketch to be used in:

The following LED Blink program sketches were given to us in class as examples.

The compiled sketch weighs 930 bytes as described by the below message, discplayed upon a successful compilation.

Building from these, I developed a program of my own that also considers the other components (button and phototransistor) present on my board. The idea is rather simple. The button acts similarly to a wall lamp switch. If the button is pressed once, the LED is turned on at an intensity proportional to that detected by the phototransistor. If it is pressed again, the LED is switched off. By default, the LED is set to be off.

Being unable to use my personal board, I couldn’t test the code I had written. I therefore used Tinkercad’s circuit simulation module by recreating part of my board’s circuit.

I uploaded the Arduino C program shown above through the Arduino IDE. The upload configurations used are shown in the below screenshot.

Once completed, I tested the board by turning the LED on using the button switch, and using a flashlight to alter the phototransistor readings. Worked like a charm !

Please refer to Carla’s extensive documentation of the work carried out for the group assignment.

B. Harvard vs Von Neumann Architectures¶