In this week I tested and debuged the proposed program of the ATtiny44 with a button and a led.

I also took same time to dig into markdown extensions, on the mkdocs.yml. In order to have the site more readable. I found this issue in week 5, but I didn’t manage to get it working. In this site, I found usefull documentation, even to use math formulas and other lists and notes, warnings, info, bugs, summary, tips… . This site also helps.

I reviewed the Neil week 9 lesson, found other video and tutorials on this subject, even the relationship between logic and arithmetic and begining to have a clue in understanding the microcontroller architecture: how computers make calculations, how registers function as really short memories, what is the BUS function, how they are built, the internal design logic gates, adders and manage to try to write a 8-bit word to open a pinB3 using the ATtiny44 datasheet.

I programed the board to blink a LED. I found a lot of trouble using Mac for programming the board, but succeeded. I manage also to program the button to control the LED. for the ” and for the “hello world” outcame. Debugging the software was another issue. Serial communication, pullup resistors was also a serious issue. So many variables to debug.

For the group assignment I discuss the workflow that my calleague, Mónica Pedro, used in the Machine Design week with RASP PI documented here.

After reviewing the week 9 lecture, we followed this steps in order to have the chip programed with the ISP done previously.

The first bug on a computer was really a bug! It was discovered by Grace Hopper, a navy officer at that time working on the Harvard Mark II computer. Mark I was rebooted in 2014.

ATtiny 44 is a CMOS (complementary metal-oxide-semiconductor) 8-bit RISC microcontroller with an AVR architecture (based on Harvard architecture). It runs at 20 MHz, since its a RISC it thus an instruction per 50 ns: it can do several 8-bit instructions in one cycle at 20 MHz.

Starting to read the ATtiny44 datasheet, each part of the microcontroller as a registers, that’s where you configurer it.

The instruction set4, also called ISA (instruction set architecture), is part of a computer that pertains to programming, which is basically machine language.

The instruction set4, provides commands to the processor, to tell it what it needs to do.

Understanding the relationship between bits and software¶

Follow this tutorials and projects to understand whats going on at the microcontroller: - Megaprocessor - How computers add numbers - BUS and registers - Bits Math Tutorial - Logic gates

We can program the board with the [terminal] (https://www.gnu.org/software/make/manual/html_node/Introduction.html#Introduction) or the ARDUINO IDE: you can learn to use the ATtiny with the Arduino IDE here.

After preparing the board,

I turned to another 2018 Fab Academy Student, Solomon Embafrash, that also uses Mac IOS and followed the steps proposed and found that I didn’t have the proper avrdude version. I installed using this tutorial, where there was a need to install homebrew.

On week 7 I programmed the ISP with the Atmel-ice. I did found a lot of issues when using Mac but managed to work trough since I found that the avrdude version was one of thei issues. Now there is no need to use it again. I remove the soldering jumper and start to use the ISP.

For debuging I use in the Linux system already prepared by Filipe in order to see if it was working properly. We also tested with Arduino IDE and it work fine after soldering again: it stops working suddenly, some wires were loose.

I did this using Linux but now I want to use a MAC.

I started to define the tools in the ARDUINO IDE. It missed the ATtiny44 board so I went here. Copy the URL, past it in the “Aditional Boards manager URLs”. To get it, in the menu, follow this: ARDUINO → PREFERENCES.

Another way to use the ATtiny is to install homebrew and use the terminal. To see if all went well with the RS232 follow this tutorial.

If it doesn’t work try this URL

The complete tool selection menu is:

Even so, I get this error:

I tried it with LINUX, the ISP is working. But, changing to Mac… I get this failure…

Diging into the ATtiny chip failires, I manage to select the wright items.

What was wrong? I really don’t know, I try and try and didn’t succeed but only with this options selected I achieve this goal (see the video bellow):

I used pin 8 for the LED and pin 7 for the switch. This is the blink led. The result:

I use this simple code:

Debugging was a little bit dificult (at the same time I add the serial comunication issue) to find this internal resistors but all PB and PA at this chip as internal pullup resistors.

For this part, I get inspiration on this FAB ACADEMY student, Gustavo de Abreu. But before doing “echo”, I decided to make a program based on the Arduino “SerialCallResponse” example. The program came out like this:

After I changed to have serial comunication the program went wrong, the Led doesn’t work and window serial only shows backwards ?????????????????

Hyphotesis: it uses a lot of memory, and the system is unstable: strange because its a program with so few lines of code; the serial connections are not correct? The software codes needs sommething else? The fuses are not correct? …

SOLUTION (sites I Used to overcame this issue.) - Help: https://www.circuito.io/blog/arduino-debugging/ - I found an error on my PCB: the capacitor is at the wrong place, wrongly welding. - Another strong error: TX and RX not at the wright place: TX - pin 12 - Arduino pin 1; RX - pin 11 - Arduino pin 2. - Not a problem of memory, I did the code wwith just 52% of memory, and the problem is at the serial communications; - The USB RoHS TTL 232R-5v color wires are correct.

The ISP: serial programming: what those pins are for?¶

The bootloader is important because your chip needs to know what to do with the bits you are sending to program your IC: in what “places” you want your program. You can do this using the ISP six connectors: MOSI, MISO, CLOCK, VCC, RESET and GND; The RESET is important because you need this IC pin HIGH for your chip to do nothing until the program is loaded; while the VCC and GND are simple to explain because your board needs energy, the MOSI, MISO and CLOCK are directly linked to the programming itself: in brief, the ISP is an 8-bit shift register in both the Master and the Slave, and a clock signal generated by the Master. The 8 bit data must be transfered between the master registers and the slave registers controlled by the clock: the master send 8 bits, the slave register record, and the clock stop the recording saying that was the byte. NEXT! In this case, we connect the SPI (Serial Peripheral Interface) Lines to the ISP (In-system Programming) Interface. The SPI is a peripheral used to communicate between the AVR and other devices.

See page 4 of this datasheet for the AVR abreviations.

See this reference for more details about this and also SPI communication.

RESET external switch on the AVR¶

Refer to page 8 of this microchip datasheet. Between the RESET pin and the switch put a 330 ohm resistor. The other side of the button switch is connected to GND.

In the group assignment we compare the workflows between the atmega328p and the Rasp pi. The first I have already same experience, the former, although I used, never explore in deep like Mónica.

Raspi, is a “single-board computer (SBC) is a complete computer built on a single circuit board, with a microprocessor, memory, input/output (I/O) and other features required of a functional computer”, source: https://en.wikipedia.org/wiki/Single-board_computer. It doesn’t provide a comfortable working environment or user friendly programs with graphical interfaces. I used IOS Raspbiam installed on the Broadcom system on a chip (SoC) with an integrated ARM-compatible central processing unit (CPU) and on-chip graphics processing unit (GPU). Off course is not so fast as normal computers,its necessary to develope some work habits that make the process tolerable. For instance, there is a natural need to install same programs like PIP in order to be more user friendly all the linux natural comands at the terminal, like, installing external Python modules. It can run under RISC OS.

With the Atmega processor family there is a natural environment named Arduino IDE that helps a lot to use this small chips.

They are both RISC architecture processors and the ARM is faster them the AVR: but, there are same buts for this. For specific tasks, sometimes its best to use the AVR.

Since the RAspi as a OS Raspbian it can run different things at the same time.

The nano editor its ok but its kind dificult to manage, for instance, program lines copy. So its better to use a normal text editor.

This workflow comparing between the AVR and the ARM was real in the two weeks of group work at the machine design that Mónica documented.

My favorite personal computer. A project in mind: making a lot of this using the laser cutter for the supports:

The main diferences, besides the code where Arduino is programable using arduino script or C/C++ with lots of libraries that help a lot, its the easyiest way to program because it uses Arduino Ide and the pins are defined by simple numbers, for instance. Its possible to use C-code or even other wasy of coding, using friendly interfaces.

Otherwise, the Raspberry Pi is a general-purpose computer, with a Linux operating system, and the ability to run multiple programs. It is more complicated for me to use it because I’m not use to Python environment. But it can be programed with a variety of other languages. Python its a primary programming languages on the Raspberry. However it runs the code directly without the need of a computer like in the case of Arduino. It can be used in large projects as well as with beginners or experts. It as a lot of libraries as well and can be used in small embeddable boards.

At Berytech Fab Lab they have a short page about this with an image then resumes very well: 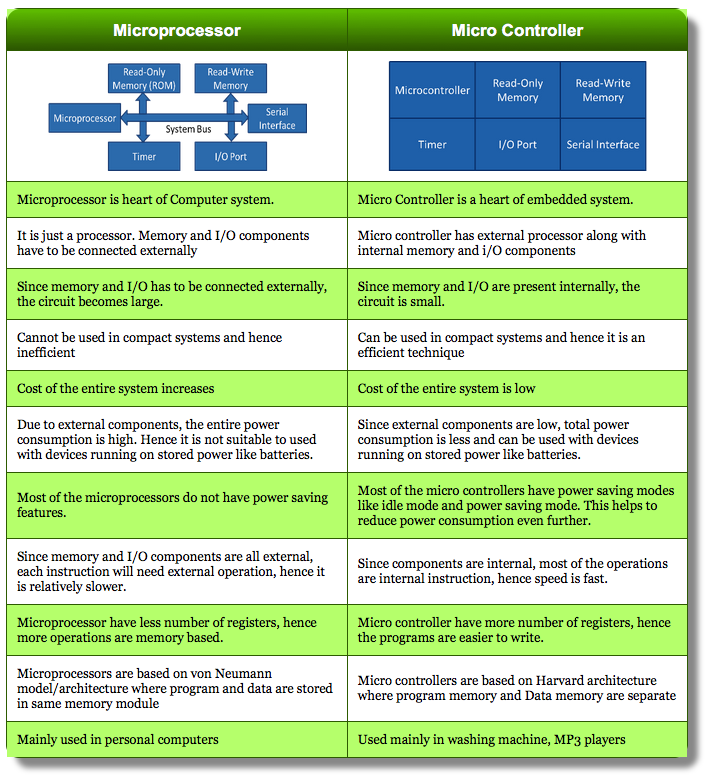