In this week, I had a different mind-set for designing my big thing which should be milled. For that I searched week08 assignments of previous batch students. This gave me some idea to make something big.

After neil’s class was over, I went home and I had a deep thought to do something big.

Hence, to complete the assignment within a week of time. I choose to make wooden chair with kerf bending.. This is an compilcated one… which, I understood after while making it.

Initially, I thought Kerf Bending and Live hinge is same. But, actually, they are different. 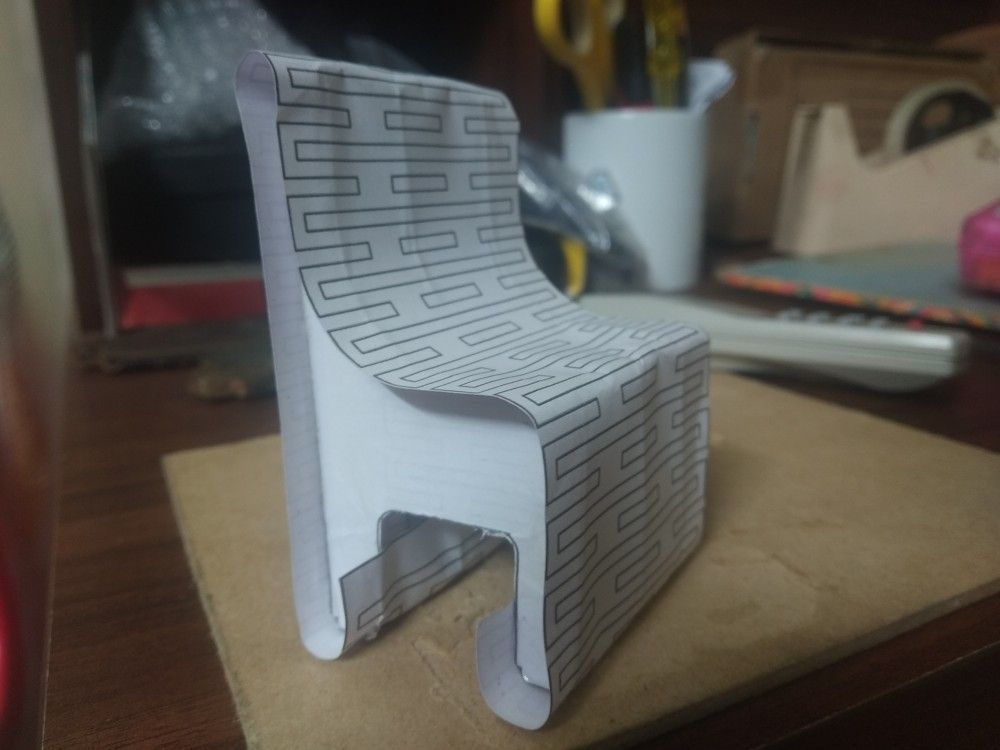 Design of the Chair (prototype).¶ 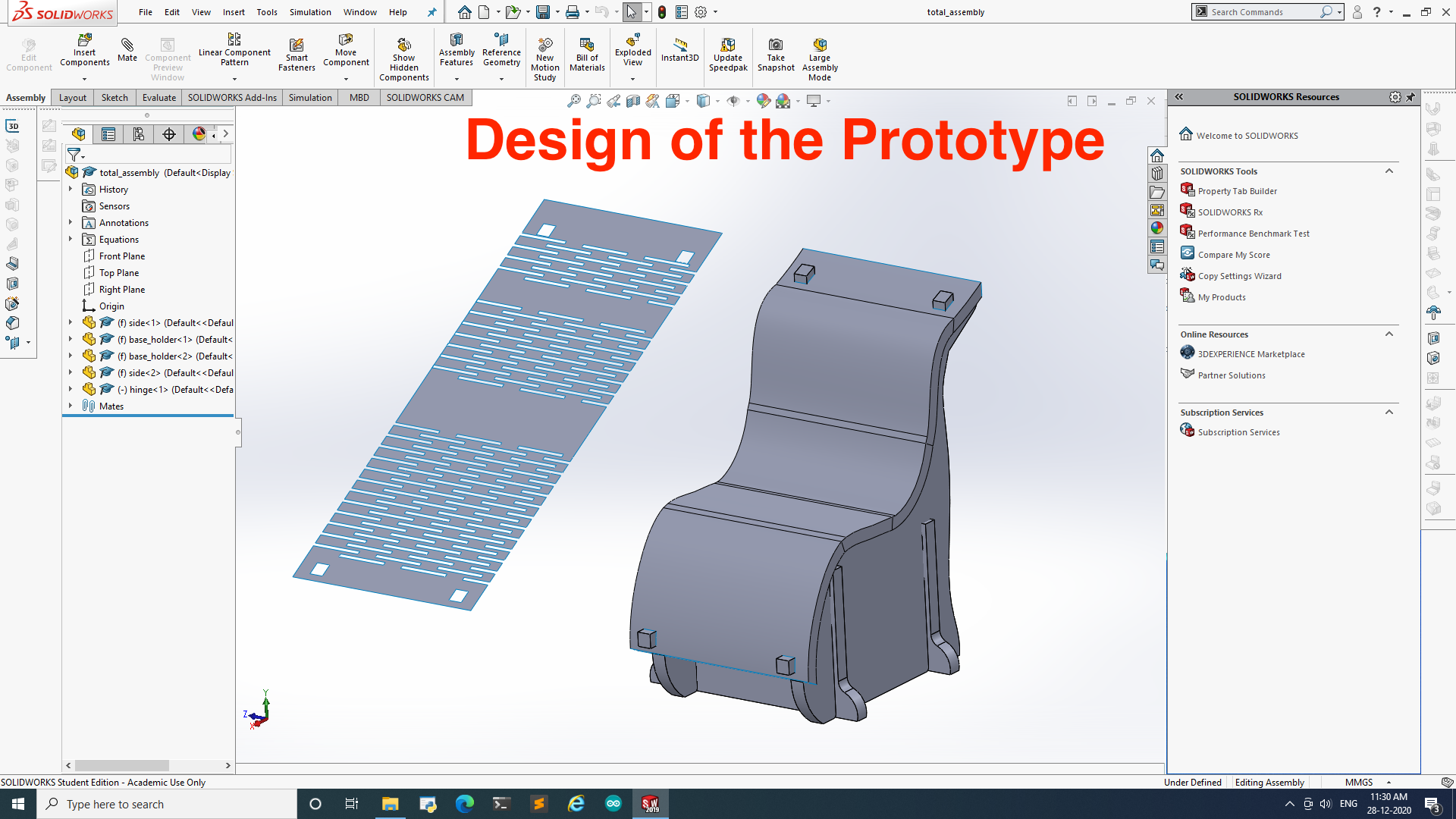 Design of the Chair (Original).¶ 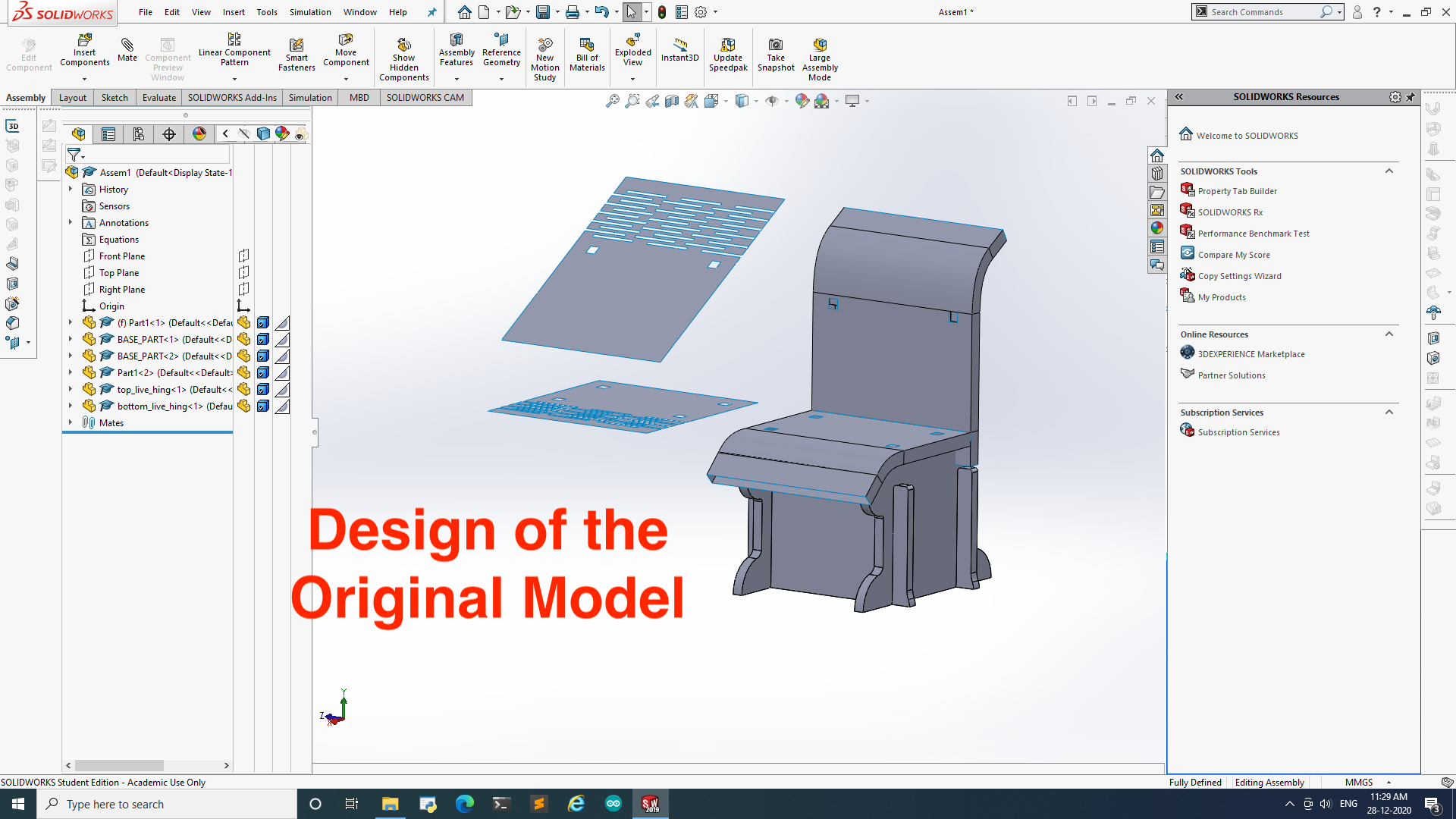 Later, I had diffculties with live hinges in the prototypes. I had many failures.

Important rules to have a proper live hinge is :

These are obtained angles of a ply-wood (front & back). 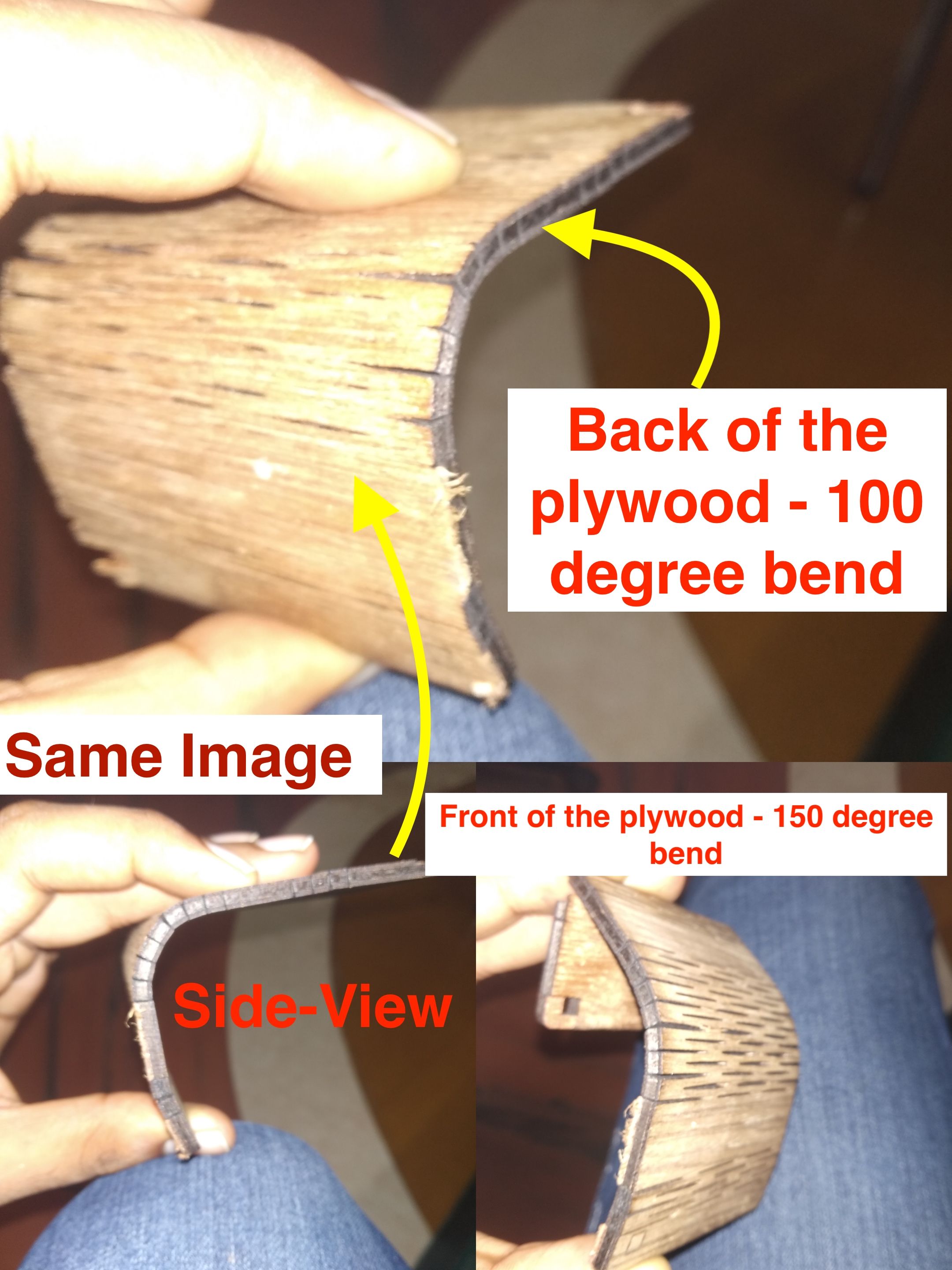 Before doing the CNC cutting, I did the laser cut prototyping. Hence, These are the results.

Design 1 (which is only prototype).¶ 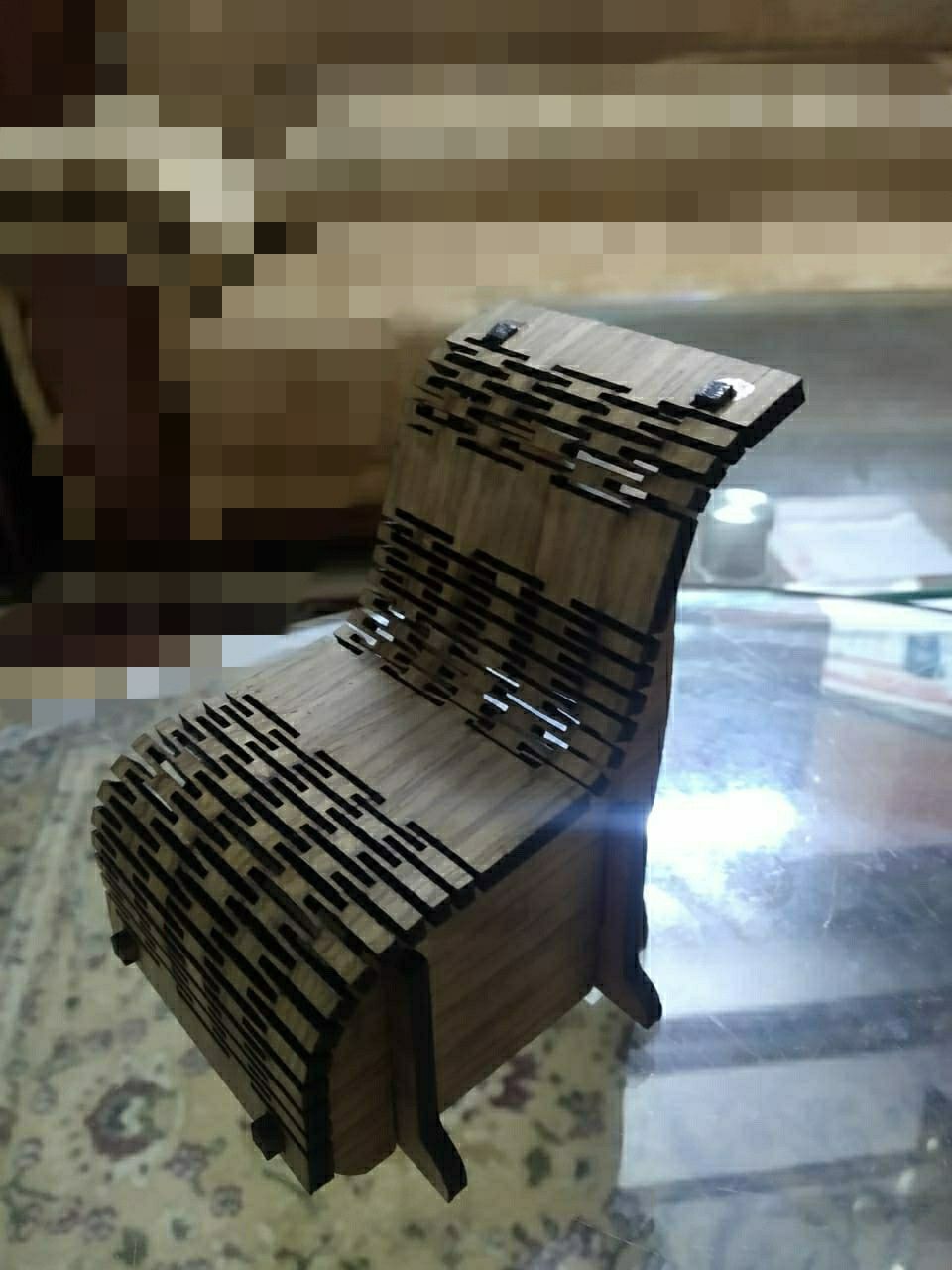 Design 2 (which is the original model).¶ 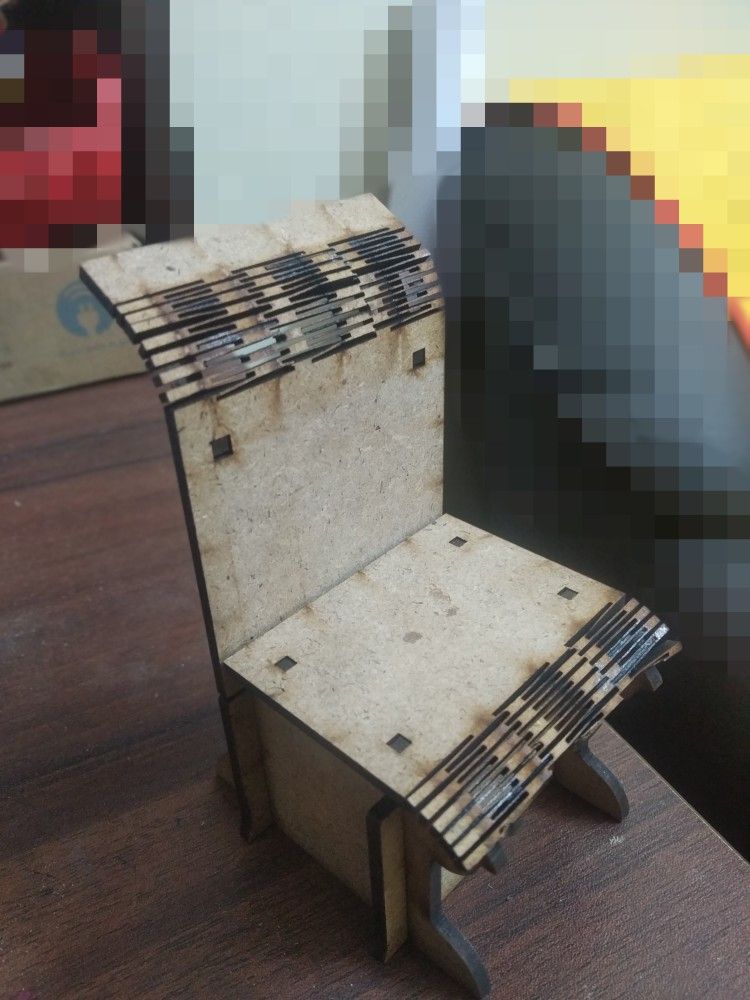 The reasons for making design 2 as the original model.

Making live hinge, like a mate over the chair from a single sheet of wooden ply would not be possible as the strenght of the ply reduces. Moreover, I don’t want anybody to fall after sitting in my chair. Hence, i have moved to design 2, as it as better stablity and also quite easy to build it.

While, I had many attempts in making live hinge in the prototype. I had explore setting of sheet metal and other tools in solidworks. These was the tool which helped me to obtain my prototype.

With this trial and error method, I got to know that breakage of live hinge is not preventable. From then, I changed my making style from live hinge to kerf bening. A video in youtube helped me to know about kerf bending. With that, I thought I can make it with the ply I had.

The Video on Kerf Bending.¶

Hence with this, I have calculated the kerf gap and number of kerf cuts. With Some edits in the DXF file for adding kerf cuts in coral draw the cad design was ready for CNC cut.

The G-Code was generated from ArtCAM. It was easy in this software and I was going to operated the HEXA CNC machine and this is how it looks… 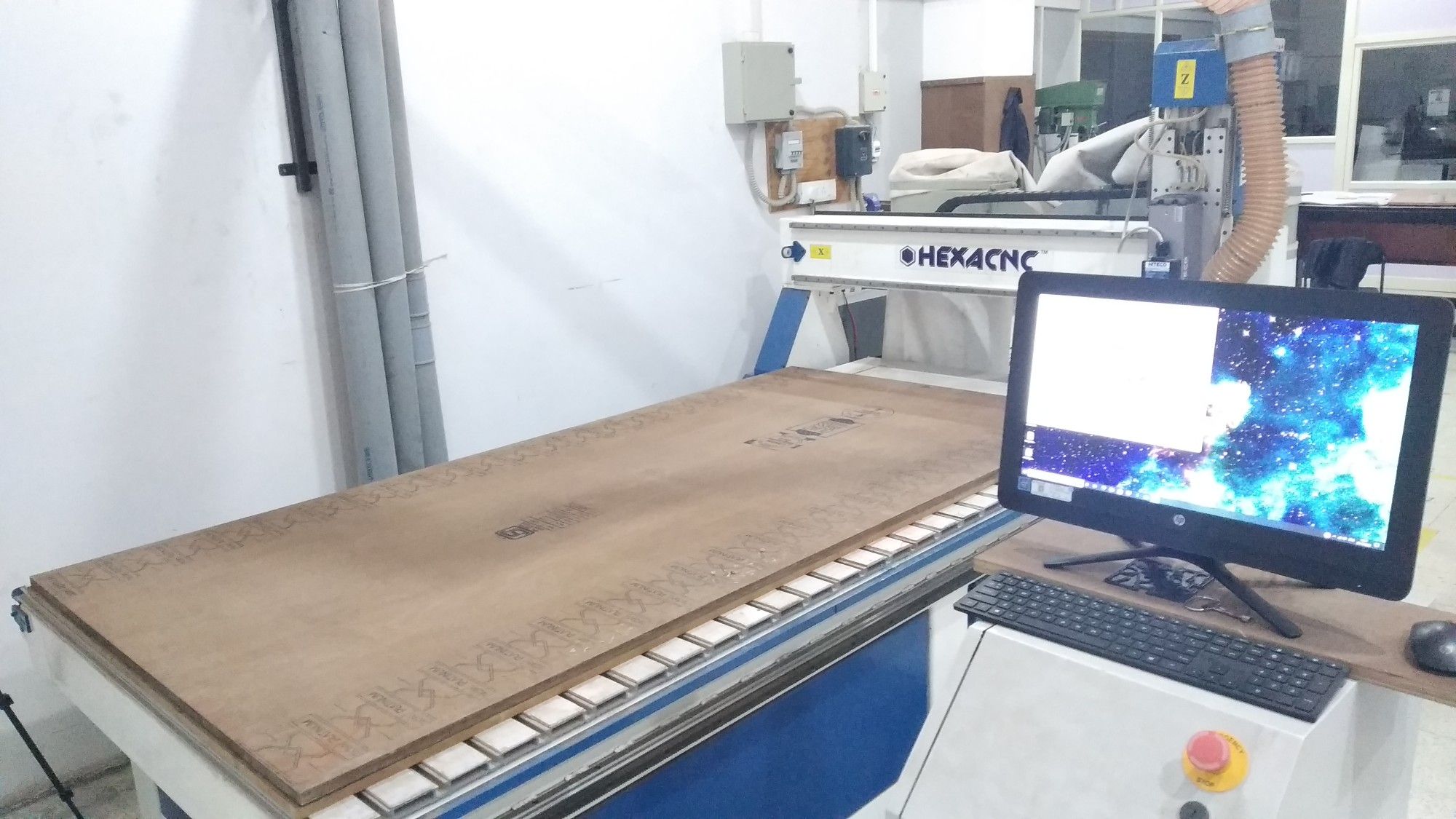 The ply-wood I used for making this chair is 19mm trojan ply.” The Big One”. Acutally, I thought kerf bend would be easier, it wasn’t.

Now the Tool settings. I used ” 6mm Flat-end End mill with 4 fluts “, with that it was fun time… depth of cut was 19mm, for the kerf bending line, it was 15mm. the Feed rate was 12000 mm/s and plung rate was 8000 mm/s. These rates got changed with the hexa machine according to the time and sound produces from the end mill. unlike PCB it had only 1 path.

Then the ply was loaded and the machine was set to home position, it was the time to mill. This the video of the milling.

Initially, I had milled the side part and base part of the chair.. this is the cool picture of my friend, sitting after filling the spikes is over. 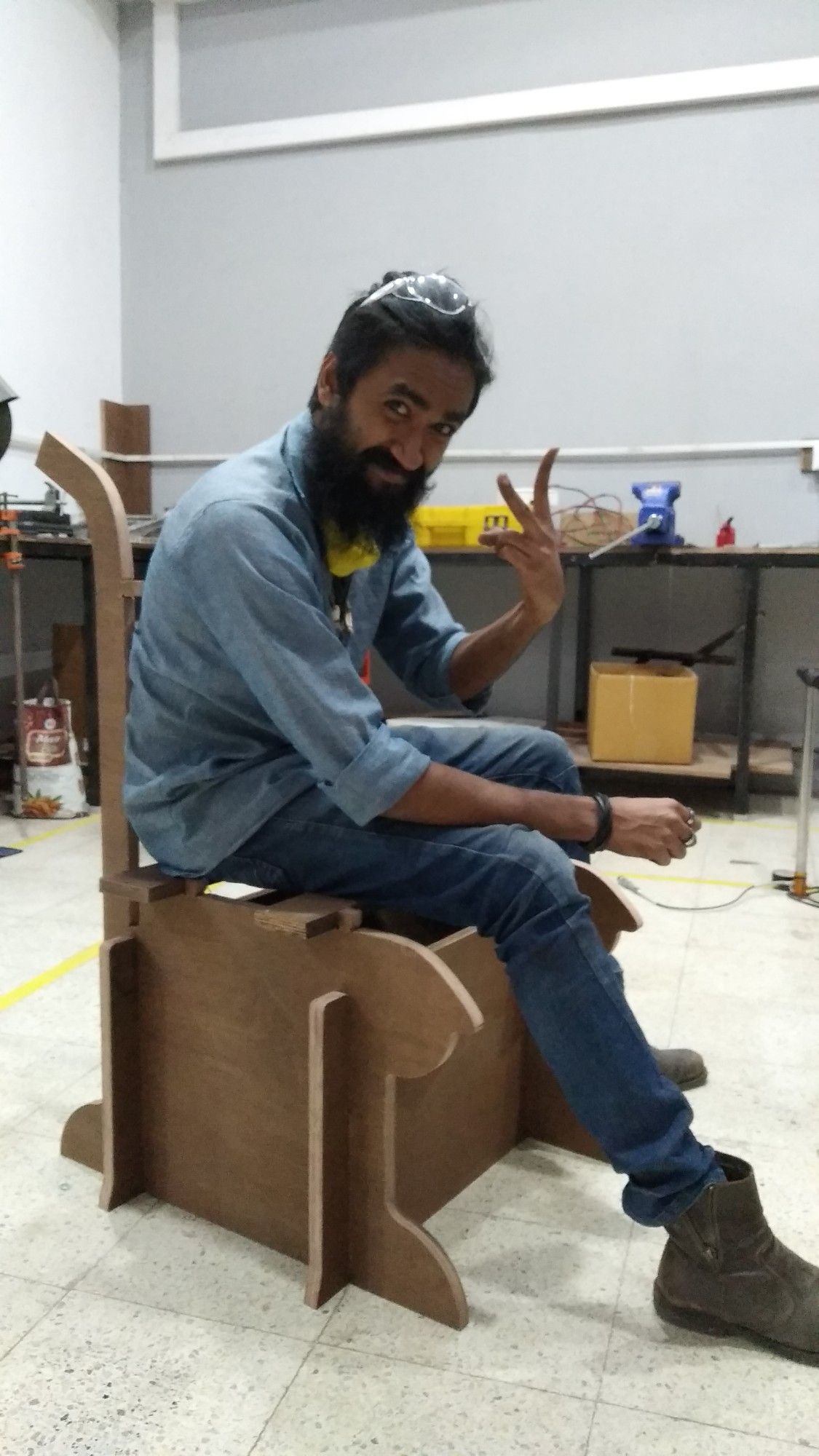 Actually, I had no idea of carpentry expect sanding as i did it, which making PCB. Now, I had to do sanding with 3 sand paper 80,100,120 , then I should apply sealer, then again, I should sanding with 800,1000, 2000. After completing this, I should apply varnish. This is the whole aganta after the CNC cut.

Couple of Picture of the Work.

Onces, The side and base part done after applying sealer. I had work on the kerf bending, Actually, the wood didn’t bend as, I expected.

It was the hard time, When it didn’t happened as I thought. Moreover, I thought If, I had just inceased the number of slots, It would have bend. and there was no much differences in using Table-Saw or Flat-end End mill. Moreover, Trojan ply was too strong and it was never easy to bend it..

Then my teacher suggested a method heat bending.. this is normally making the wood soft by soaking in the water, bending the parts and finally applying the heat from the Hot-Air gun to make the wood rigde.

After, applying this technic, the wood was so strong and the kerf bend part was broken. It was totally, not bending and got broken..

Then, I cut the kerf slots and made into strips and I thought to nail the kerf strip. That’s, how the work became tougher… which making something big for a first time. Same procedure is followed, like sanding, sealter, sanding and varnish.

Once, 1st Sanding is done, I did the a dry fit.. This dry fit also caused me problem.. like the slots were off-set by 10mm, which was a design error.

This was the error… 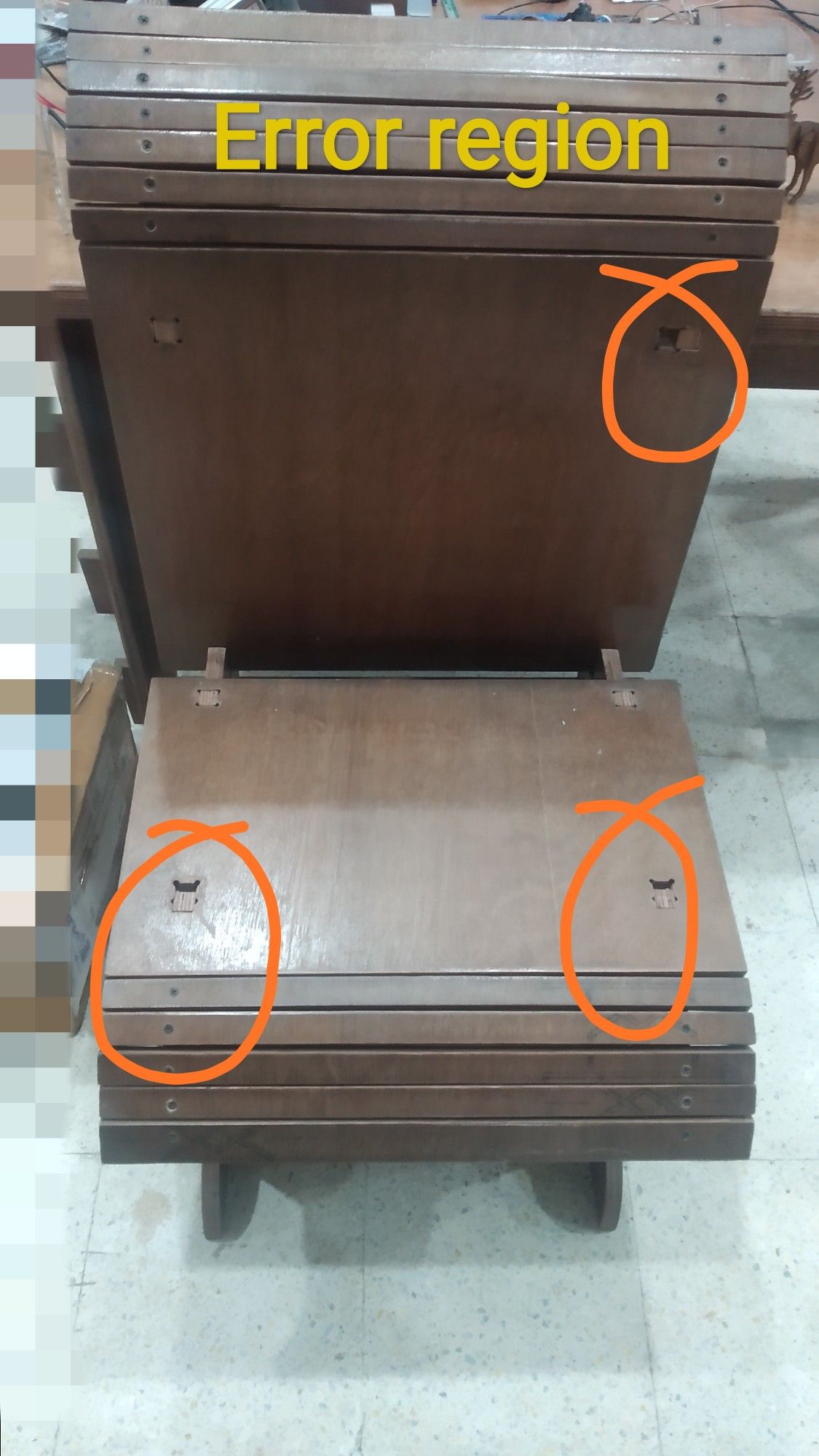 To make the Off-set slots, I used 1/2 inch chisel and jig-saw. This two tools helped me correct my mistakes.Then a major issue was found the keft strips were not able to align in a proper shape with the chair’s profile.

This is the error…