During this weeks we defined and made the mechanical parts for the assignment week to make a three axes cam slider. Well, we’ve analyzed designed and made the necessary mechanical supports. So on Fusion 360 I made a new project MTM2019FabAcademy to work, share and upload concept, 3d model and design in real time.

Michele Serpico designed the lateral supports on Rhinoceros and then he made these parts; the two lateral supports are composed of three layer with a thick of 4mm (as the plywood thickness we used) and necessary joining parts; Michele made some of them by 3d-printing and others by laser cutting.

On Rhinoceros Michele designed supports and necessary joining parts. He designed parts to cut plywood with the laser cutter and other joining parts to make by 3d-printing, and also the complete the assembling system to make a concept animation. 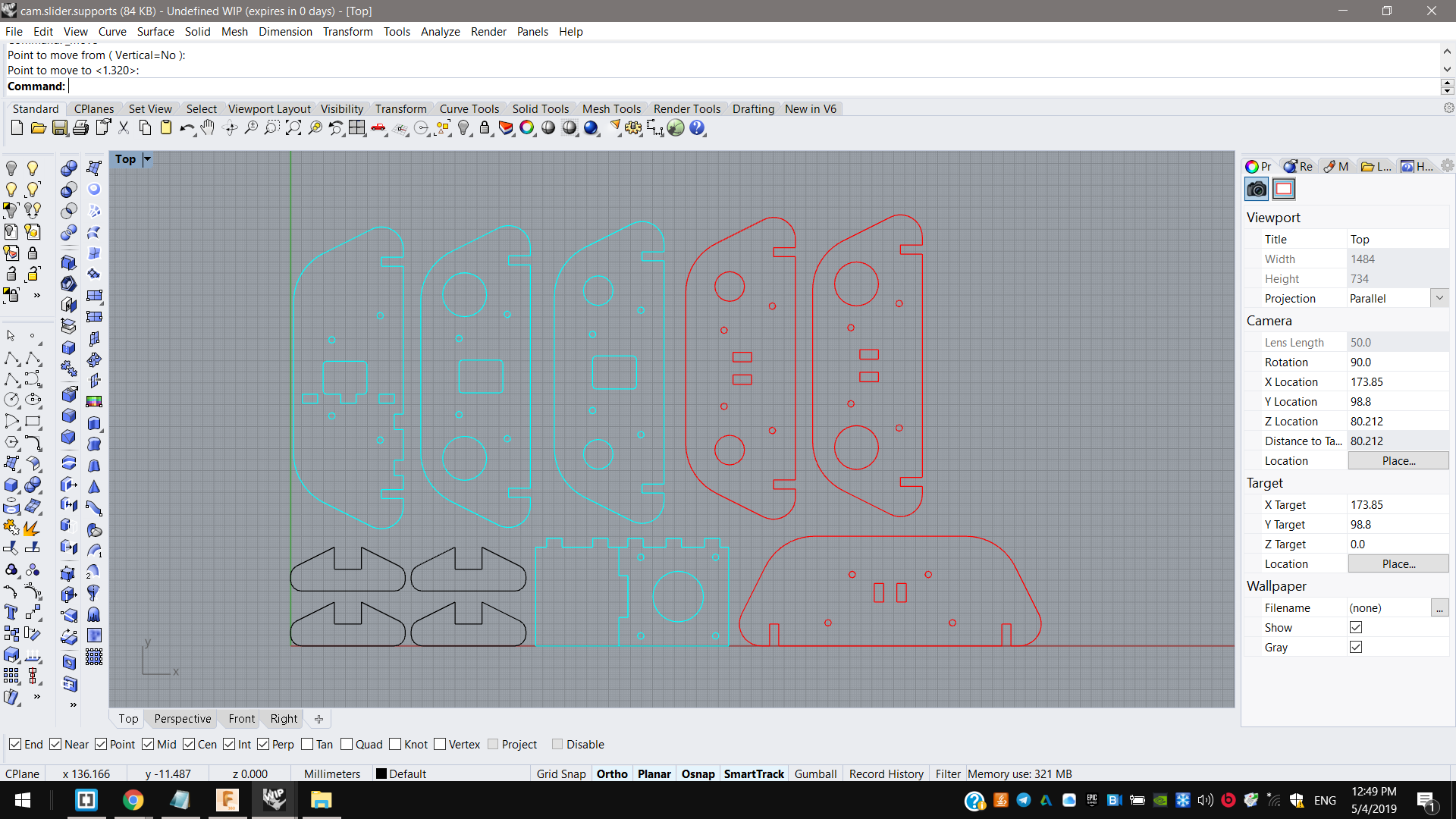 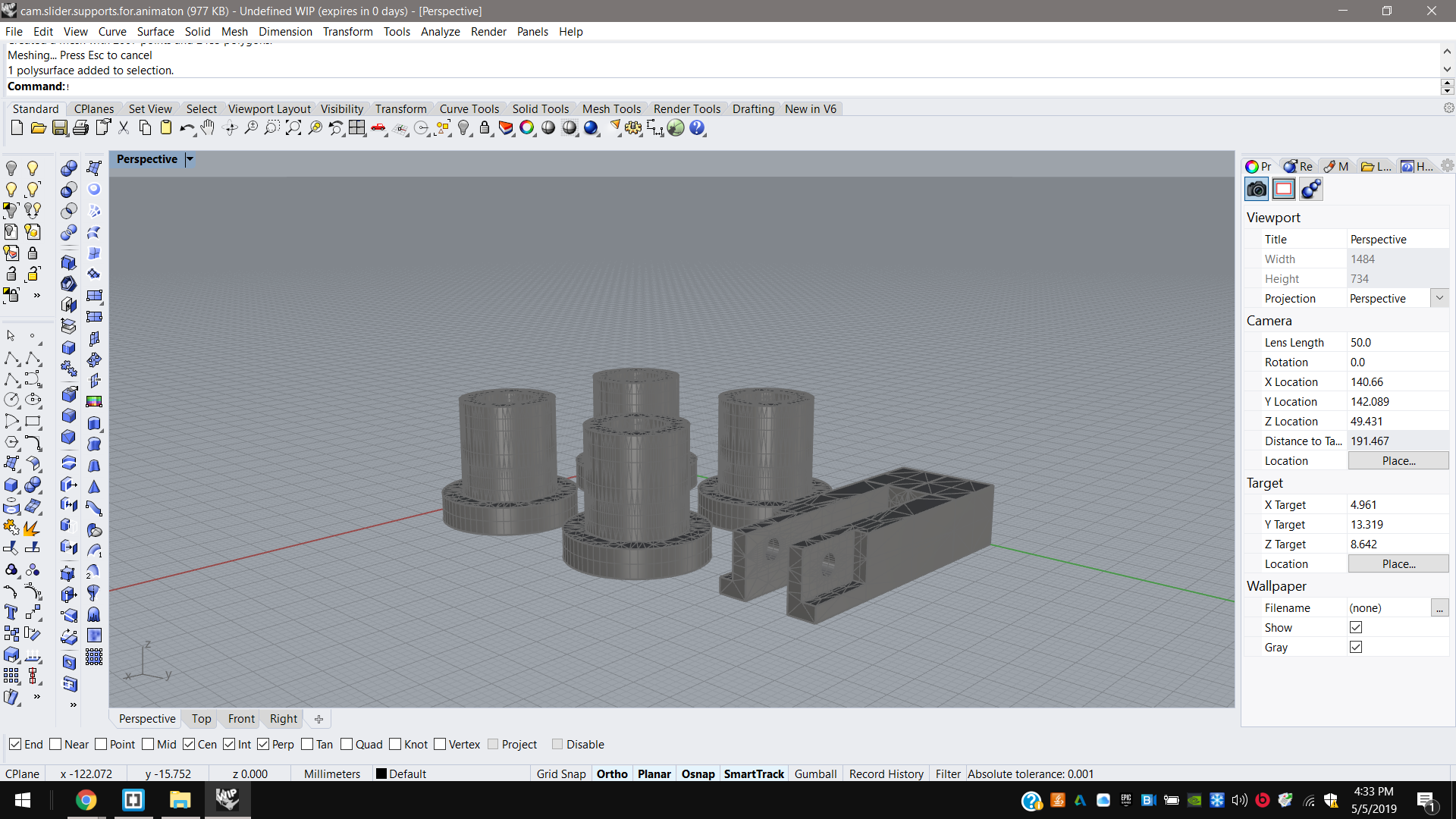 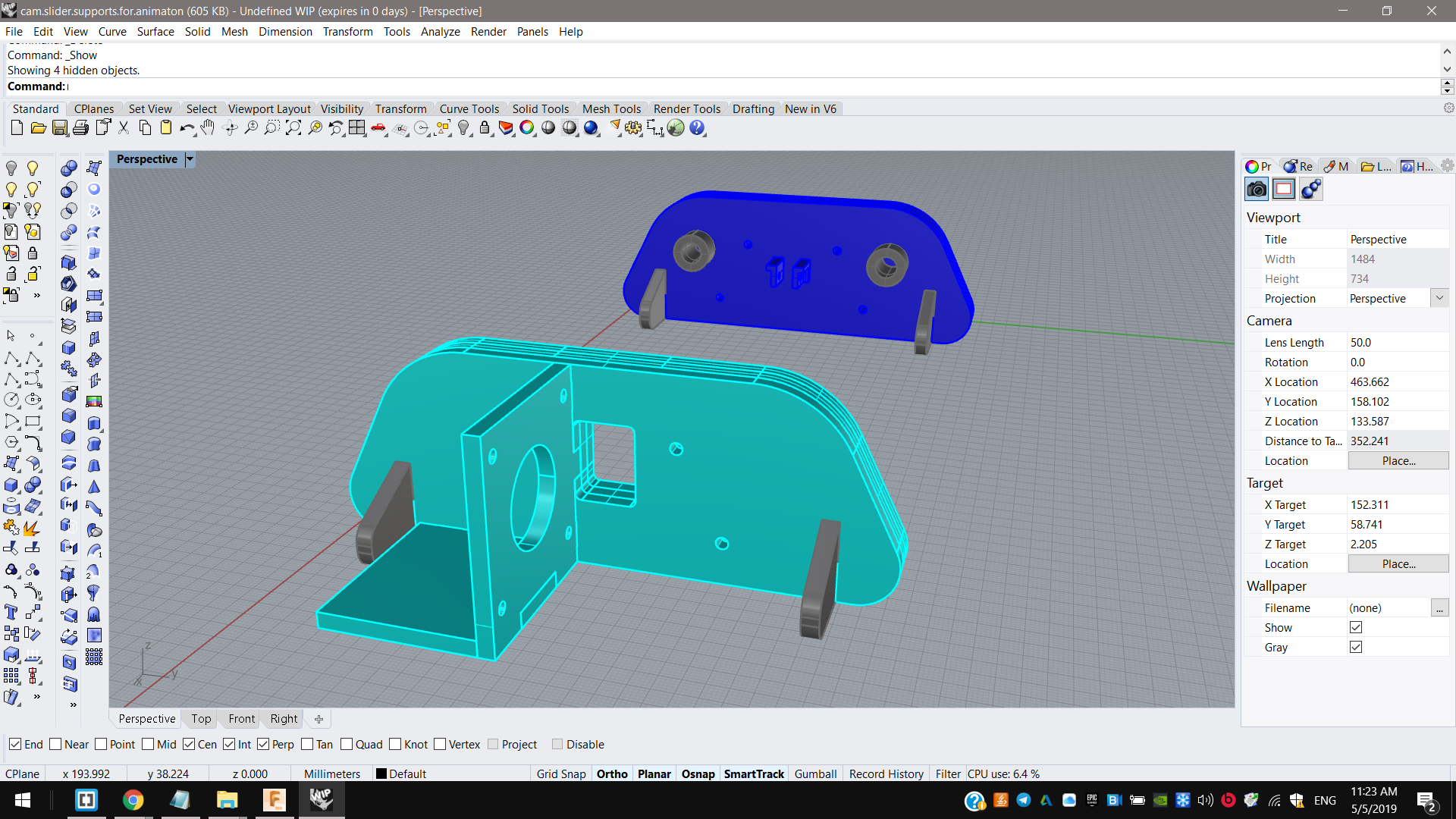 1st On Fusion he uploaded the .3dm files of each part in the group folder; 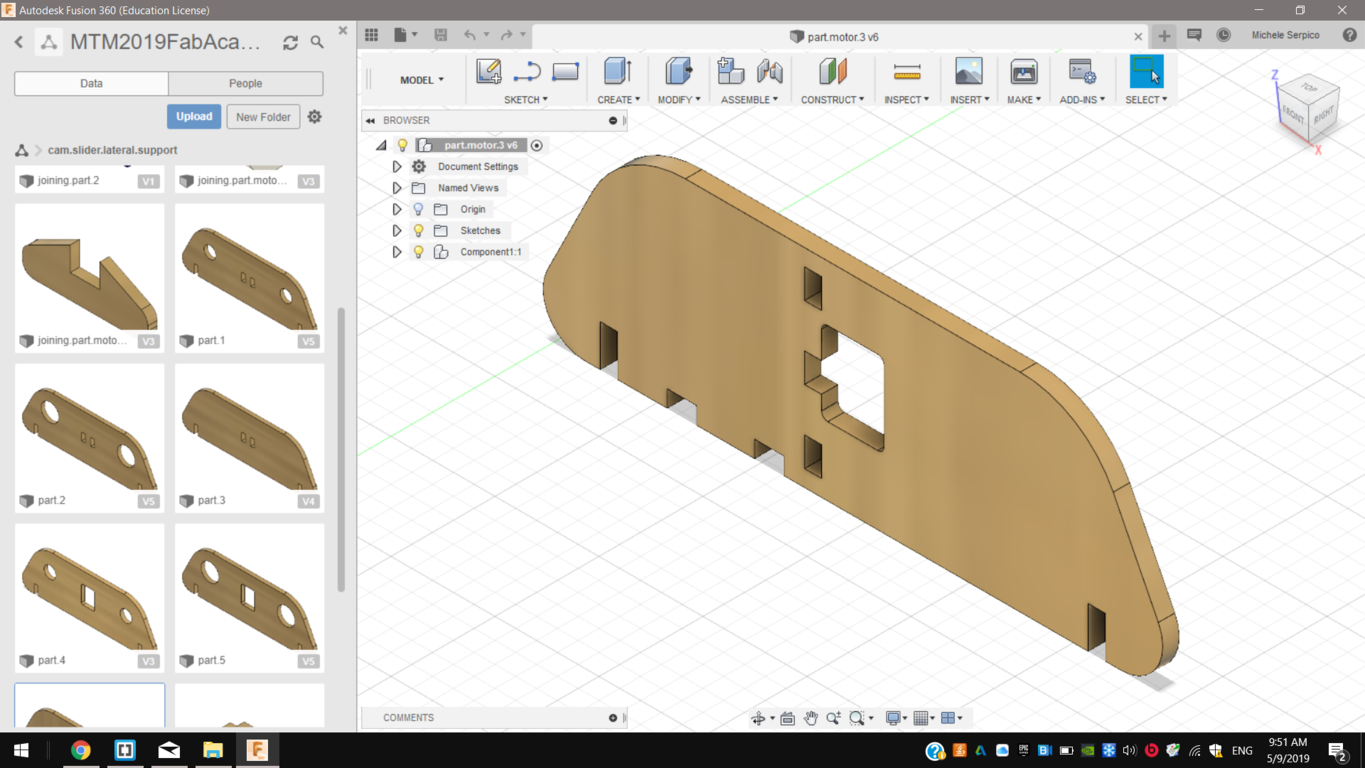 2nd And for the respective lateral parts he made new files of assembling; He inserted parts in these respective files and in the window “assembly” I selected the command “join” to make a rigid joining of parts by points. 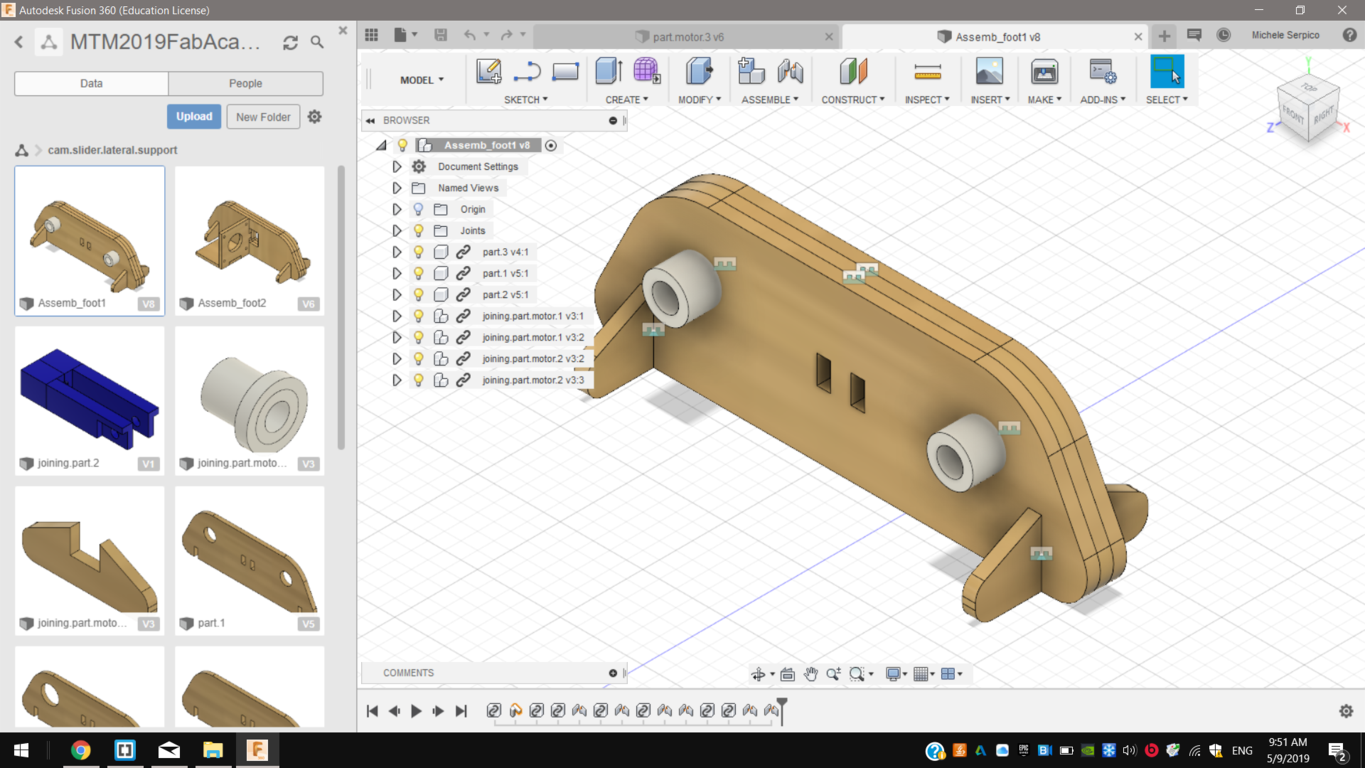 3rd he also made an animation of parts, with the default Fusion 360’s recording function of movements, in the “Animation” workbench:

He uploaded .dxf file of parts and started cutting with the Helix Epilog laser cutter.

Then He made other joining parts by 3D-printing. 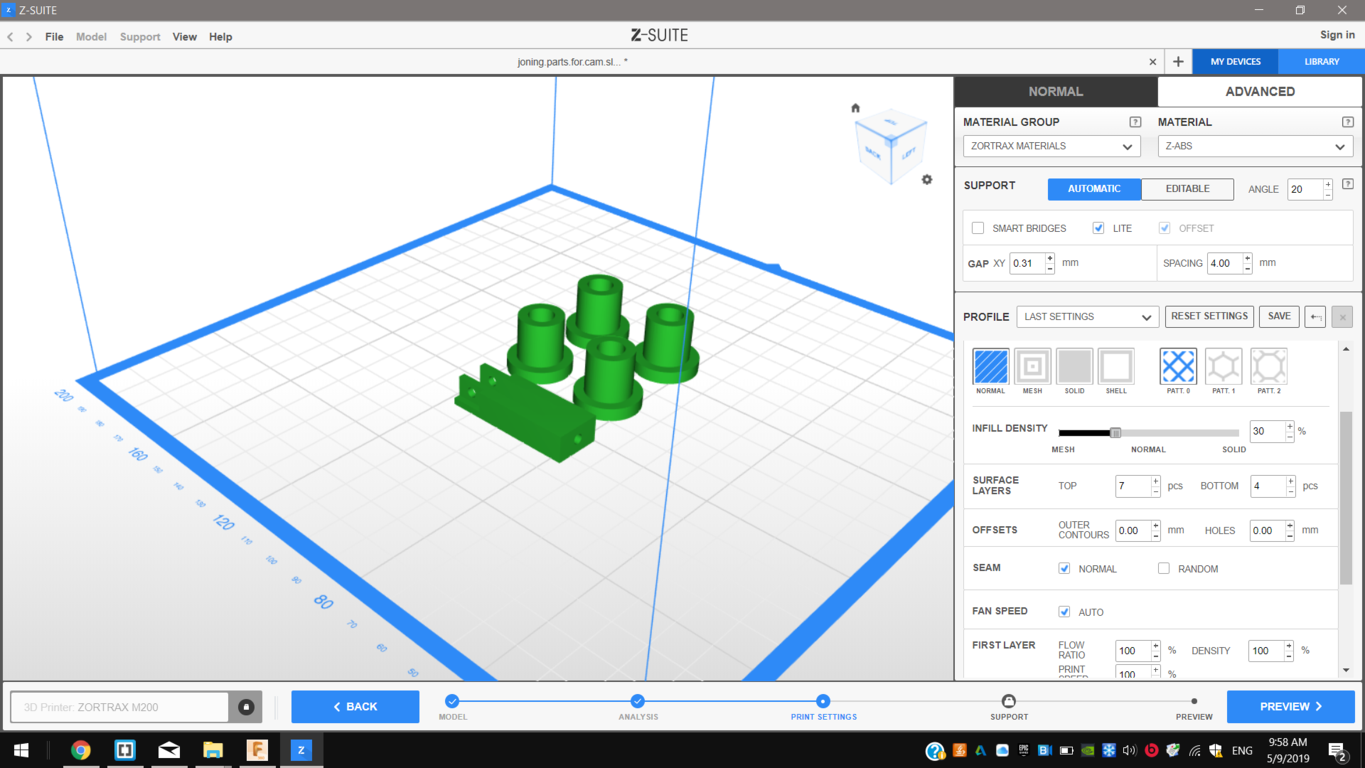 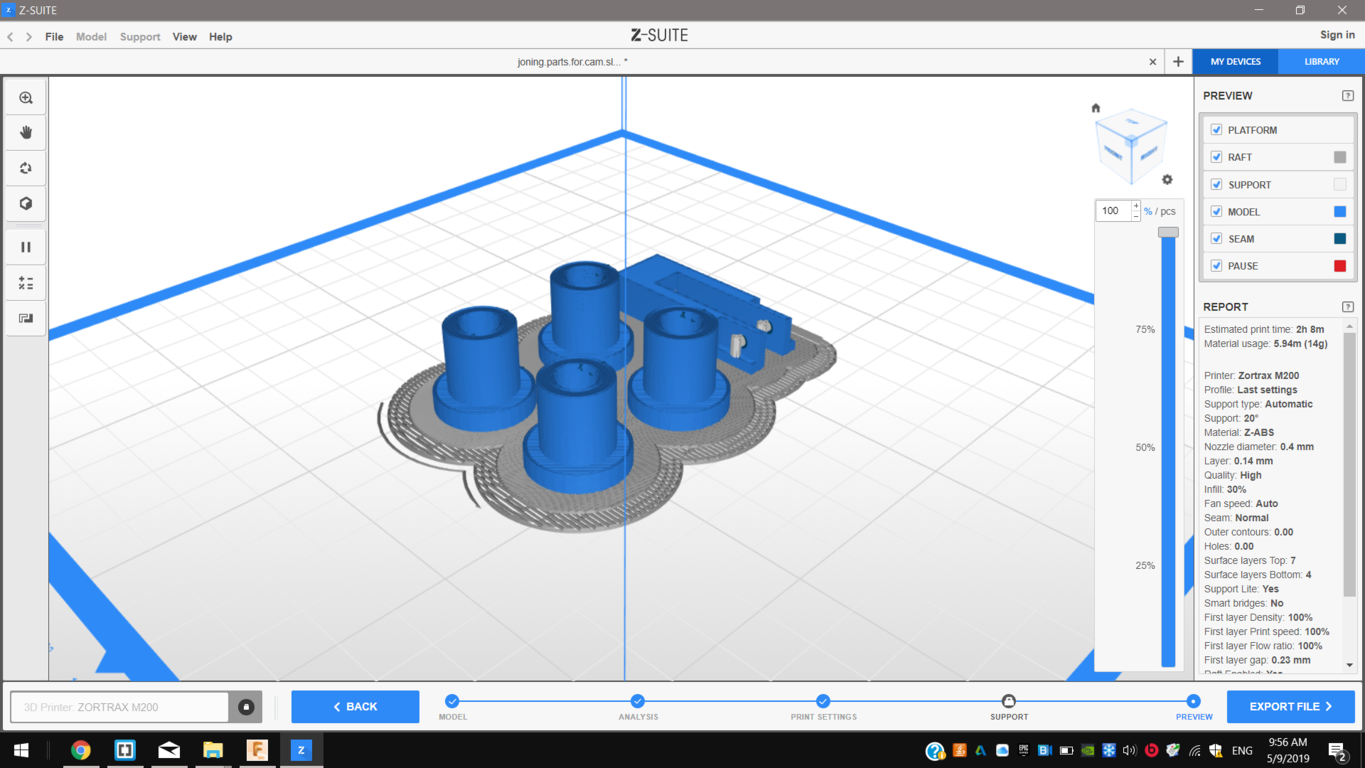 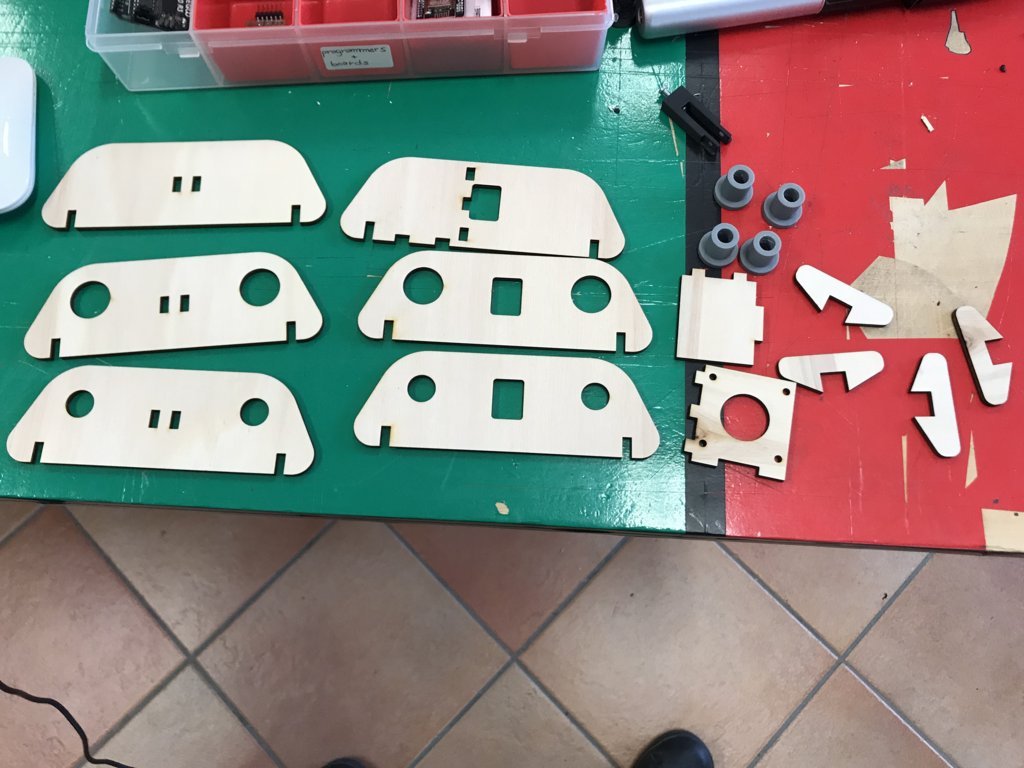 During this week, in Group with Michele Serpico, we defined and made the mechanical parts for the assignment week to make a three axes cam slider. Well, we’ve analyzed designed and made the necessary mechanical supports. So on Fusion 360 I made a new project MTM2019FabAcademy to work, share and upload concept, 3d model and design in real time.

This is the screenshot of the shared project on Fusion 360 platform.

Once sketched a project draft, we decided the mechanical components necessary for the correct operation of the slider

To design and assembly the slider, but not each existing and commercial components, I’ve used an online tool connected with Fusion360, Autodesk Fusion Partcommunity. Once you’ve choose the part you need, you can directly send it to Fusion project instance opened on your PC.

In this case, I needed LM8UU linear bearings to move xplate on the X axe.

Making some parts and assembly history, in this Video:

The 3DOF-CamSlider functionality is divided as follows:

Here you can download the whole project in compressed file that contain the native format .f3z

Here you can download the files that I export for cutting some pices. In the archive you can find 2 folders for different materials and thickness.

Here you can download the files for 3D printing in zipped one that contain the native format .f3d

Finally, this week we actuated and automated our 3-DoF CamSlider; we made it through Arduino UNO + CNC Shield GRBL based and we had controlled the machine through Serial Port Monitor at first and than through GRBL Controller.

GRBL is an open source embedded CNC controller written in optimized C that runs on Arduino; this firmware is written in highly optimized C utilizing every clever feature of the AVR-chips to achieve precise timing and asynchronous operation, even through many interfacing programs.

So I used the Arduino Serial Monitor and set the baudrate to 115200, and I could check the right connection seeing this message:

Typing $$ and pressing enter we saw $$ Grbl settings to calibrate and manage the system:

As you can see from highlighted line, we’ve corrected step/mm to 100 for the correct corresponding movements of the X axes. Here you can find a link to the complete commands guide on GitHub project page.

These are the components we used: