Some information about me

Hi! I’m Henk Buursen, 52 years young, father of 3 teenagers, living with Pien and the kids in a small village at the outskirts of Amsterdam.

Since 2000 working as senior system and network engineer at Waag Society, an institute for art, science and technology. From 1998-2000 working at the Transnational Institute also as GNU/Linux systemadministrator. Years before i worked on and off for Transnational Institute, an international research and advocacy institute committed to building a just, democratic and sustainable planet, and Worldcom Foundation, a non-profit organization involved in the development of communication systems for groups and organisations working in the field of development issues, especially in the South. For Worldcom I worked a year (1988) in Ecuador to help setting up the internet part of a combined satellite/internet project for La Asociación Latinoamericana de Educación Radiofónica. For Waag Society I went several times to New Delhi / India to work with Sarai on networking and activist media setup.

More or less none. I dropped out of school in 1983 in 4th class of the HAVO (“higher general continued education” - A HAVO diploma provides access to the HBO level (polytechnic) of tertiary education). So you could say i’m more a self-taught person. In 1991 I did a course to get into the graphic industry to become a offset printer and afterwards started working at print shops where the first computers were just introduced for prepress printed matter. And because i was playing with computers/prepress before, i became my first job were playing with computers became my profession.

As you may have noticed, there’s a gap between 1983 and 1994. Spending those years as full time activist in Amsterdam and beyond was the perfect playing field to learn and develop my skills. Repairing houses including gas, electricity and water infrastructures was only a part. Other parts were building up and maintaining cafe’s, shops, cinemas, healthcare centers, pop and theater stages, organising big gatherings/demonstrations/riots, pirate radio broadcasts, weekly newspapers to name a few. We did everything ourselfs. Later on, in the beginning of the 90’s, i worked more and more with computers, using BBS’es for communication with similar groups on an international level. Around those years also the first contacts emerged with the hacker community. The common ground of activists, artists and hackers lead to the real nice (internet related) projects as digital city- DDS, xs4all and Waag Society.

Cracking the Movement - Squatting beyond the media

Learned by doing. I never got computer or computer related courses/education. Started using computers in 1988 AppleII, later dos and the early versions of mswindows. After being frustrated working with mswindows3.0 I completely switched to linux. After using more or less all major distributions over the years I now in doubt over ubuntu and arch-linux. More important are the environments used. That is i3, a tiling window manager, lot’s of urxvt terminals, palemoon as webbrowser, vim as editor and mutt as mailclient. I’m not a programmer, although i can read and basically understand a bunch of languages. Enough to let computers do more or less what i want.

Some things i did the past decades….

Fabschool 2014-2017 Developing and experimenting in Maker-education. We want to find out how creative design processes and working spaces can play a role in education. We used the fablab at Waag Society as playground with some very nice results over the years. At the fablab we developed the fabschoolino, a do-it-yourself electronics and solder-kit designed specifically for young creators. The kit includes an Arduino-based microcontroller you can build from scratch and program, accompanied with manuals and parts. 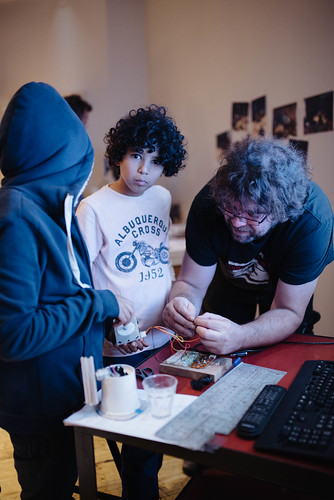 noisy square: My favorite hangout at hackercamps. The Noisy Square is a horizontally organized community full of critical thinking, discussions, theorizing and politics. We encourage the fundamental questioning of all the systems we rely on, fight, build or destroy. We aim to build stronger ties, learn from and teach to the individuals and organizations. Our favorite subjects are citizen-journalism, tools for freedom, censorship, surveillance, open technology, circumvention techniques, organization analyses and politics in general.

contrast.org: technical and editorial support for Net-activities and data asylum in the early years of “public internet” (1996).

Hobby’s and other interests.

That will be the design part. Im used to search for solutions, combine several sources (whether hard- or software) to make something i want. Designing from scratch will be the biggest challenge. And for that i also have to dig into things like inkscape, gimp, 3d modeling programs.