In this assignment, I will control the LED of two of ATtiny44 PCB by the serial monitor in Arduino IDE at the same time.

ESP8266 or ESP-12E, is a Wi-Fi microchip it can connect to an existing WiFi network and act as a Web Server, and it can also set up a network of its own, allowing other devices to connect directly to it. Also in this assignment, I will connect it once with an existing wifi, and also with its own.

I was searching about communication protocol implement and interpretation to broaden my perceptions and to understand more about networking and Communications, and I found that it is a wide field that has no limits and is also indispensable.

A communication protocol is a set of rules and regulations that allow two electronic devices to connect to transmit information with one and another.

Between the sender and receiver, the message consists of granular and discrete units, where each data packet has its own header, core information, and routing trajectory. All of this has to be synchronized and choreographed in detailed ways, and that’s where communications protocols have such a powerful reach and such an important role.

Communication protocols are implemented in hardware and software. There are thousands of communications protocols that are used everywhere in analog and digital communications. Computer networks cannot exist without them.

Serial data transfer is when we transfer data one after the other. Information can be passed back and forth between the computer and Arduino, also can just send data.

As a result of the research that I did about the type of protocol that I will use in this part, I came to the following from the broad source, Arduino Uno Wikipedia. One of the thousands of communications protocols is the “STK500” protocol, the one Arduino UNO communicates using it. Arduino UNO uses the Atmega16U2 “Atmega8U2 up to version R2” programmed as a “USB-to-serial converter”, it differs from all preceding boards in that it does not use the FTDI USB-to-serial driver chip.

First, I will upload the code for each ATtiny44 board independently. Here I uploaded the code to one of the board via FabISP. The code is as follows, when I send the number “1” in the serial monitor, the board LED will light up, the LED pin in Arduino is “3”. The code is bellow.

Secondly, in the same way, I uploaded the code to the second board via FabISP. This time, when I send the number “2” in the serial monitor, the board LED will light up, the LED pin in Arduino is “8”. The code is below.

Now and finally, I have connected the “RX” of all of the both ATtiny44 PCB and the Arduino RX in one node, as well as for the “TX” to be able to transfer data. I connected the two PCB also to the ground and VCC to Arduino to power it.

And connect Arduino via USB cable to the laptop, so that the Arduino would be the mediator transfer between the PCBs and the laptop, “the serial monitor.”

Here is a picture showing how I connected the “RX”, “TX”, “GND” and “VCC” in series to each other.

I have actually used the serial communications, that is how we send data to the Arduino. When we compile/verify what we are really doing is turning the sketch into binary data “ones and zeros”. When we upload it to the Arduino, the bits are shoved out one at a time through the USB cable to the Arduino where they are stored in the main chip.

Here, I will connect the “ESP-12E” to the wifi, in order to be able to control the LED of this “ESP-12E” as well as the LED of the ATtiny44 PCB from the webserver. Also, I will link the LEDs with each other.

In this part of the code I sets SSID (Name of the network I were in) and password to it, to connect it to an existing WiFi network and act as a Web Server. I was in Fablab Bahrain.

(PA1, PA0) are the ATtiny44 pins for the RX and TX respectively, and the (PA3) is the ATtiny44 pin that I have connected it with the LED. I determined them by referring to Electronics Design Week.

In this part, I am trying to control the ESP-12E and ATtiny44 PCB LEDs. When I access the IP URL in the browser, the browser then sends an HTTP request to the ESP-12E to handle this request. When ESP-12E reads this request, it knows when I want to turn the LED ON or OFF and so it turns it and sends a dynamic webpage to a browser showing LED status. Follow these steps to know how to get the IP:

Now I can control the ESP-12E and ATtiny44 PCB LEDs by accessing the IP URL http://192.168.1.112/ in the browser, the browser then sends an HTTP request to the ESP-12E to handle this request. When ESP-12E reads this request, it knows when I want to turn the LED ON or OFF and so it turns it and sends a dynamic webpage to a browser showing LED status.

Here is a video showing how to turn OFF and ON the ESP-12E LED via wifi.

Here is a screenshot of the webserver when I press the button to turn OFF and ON the LED of the ESP-12E, as there is the LED status above the button.

I used the “SoftwareSerial” library in Arduino to communicate between the boards. Communication on a UART is done by using two data lines: a Transmission (TX) and a Receiving (RX) lines, as well as a Ground connection. So serial devices should have two serial pins, the receiver, RX, and the transmitter, TX.

Make sure that you connect “3.3V” to the ATtiny from the Arduino, so that it does not reach the ESP-12E volt that exceeds its tolerance, which leads to its burning.

Here, to the serial communication, I used a different code than the ESP-12E code because I no longer need a WiFi. As it is written in the code, when sending the number “1” the LED turns ON.

This upper code part written in the code, meaning that if the number “1” was sent in the serial monitor, the LED would turn ON. This is called serial communication, when the ESP-12E and ATtiny are connected, and I send the number “1”, the LEDs for each turn ON.

I connected the component to the bread-board, then connected ESP8266 piece to the laptop for programming by USB.

I uploaded the code from Arduino to ESP8266, where the code works as follows: When the temperature is sensed by the sensor BMP180, this temperature appears on the LCD screen, and when the temperature rises above 38, the yellow LED lights up. Thus, the circuit operates once it is connected to power.

Modify the following two variables with your network credentials before uploading the code, so that your ESP8266 can establish a connection with your router.

I tested the board’s work, and this is an image of the LED at room temperature.

After that, I exposed the sensor to a source of heat, and when the temperature rises and reaches 38.10 degrees, the LED lights up.

As written in the code:

I connected the phone to the Wi-Fi for the microcontroller “NursingStation” with the Password “00000000”.

Open the web page and write the following link: Http://10.0.0.1/, to show the measured temperature. 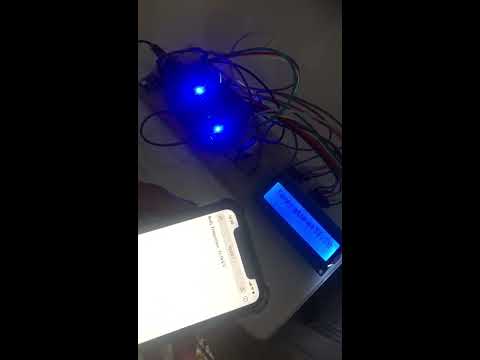 ATtiny44 Hello board with Arduino UNO¶

I want to send a message between Arduino UNO and Attiny44; by pressing the button in ATtiny44 board, Arduino IDE serial monitor will print the message (“Hi I’m Attiny”).

I don’t know what is wrong with uploading the code.

After the several programming attempt that I did, I knew that the mistake behind the failure of this attempt was the connection of the ISP headers to the Arduino for programming.