On the group page, has your group:

As a continuing student, I asked to join the class at Dassault 3D Experience Lab. There, I collaborated on an automated Etch-A-Sktech.

The first issue was that the machine was very top heavy. This created a problem with the automation of the erasing process on the Etch-a-Sketch screen. The original design was that a motor on the Z-axis would flip the screen 180 degrees to erase any drawing. The problem with the machine being top heavy meant that gravity would pull the screen downwards. The majority of the time, a motor on the Z-axis would have to do work to hold the screen in place while the sketch was being rendered on the X and Y axes. After advice from Jean-Michel Molenaar, we considered adding a counter weight to the device. Placement became an issue, at that point. At the top of the device and behind the screen, the counter weight would continue the rotation. I brought up the physics of a Drinking Bird as a possibility to resolve the issue. Perhaps we could have used an hour glass shaped container with sand or fluid to help control the weight issue. Ultimately, the team resolved to install a manual lever due to the deadline. Future development plans for the machine still include a way to automate the erasing process on the Z-axis.

The second issue involved talking to the Tiny G controller to send code to automate the motors. The team could send individual moves to the controller through CoolTerm.

2015 Gestalt Board and Stage Project 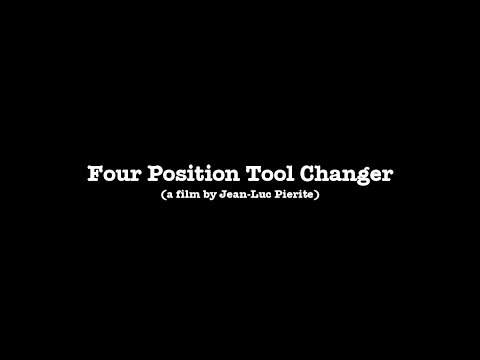 This is a group project that I worked on with Dan Moran, Fab Lab Tulsa. Using the instructions on the modular Machines that Make page, we built a single stage and planned for an end effector. Rather than have a single end effector, we decided to prototype a mechanical four-position tool.

The concept is to sacrifice some of the carriage’s travel distance to rotate a ratchet and swap tool heads.

Description from Dan:
“The lead screw will move the carriage to one of its limits where a ratchet on the carriage will engage a static pawl anchored to the stage housing. As the carriage is moved away the pawl should rotate the ratchet a quarter turn and be left in that position thanks to a concentric, spring-loaded cam. So by sacrificing a small portion of its overall travel to the ratcheting action, a single stage should now have the ability to use 4 times the tools.”

The build took several rounds of revisions in order to get the ratchet and pawl to engage reliably and stay in contact longer.

After several revisions, we improved on engagement by adding an additional rake to the pawl and ratchet.

The carriage will translate backwards towards the stepper motor to the engage the pawl attached to a platform screwed to the stage housing and as the carriage moves away, the pawl will rotate the face plate a quarter turn as controlled by the 4 lobe cam and rubber band powered cam follower.

We used #8 screws to illustrate tools.

We mounted the pawl assembly over the stepper motor end of the stage and put it through several manual cycles with my hands. Here are distances as measured from the pawl platform leading edge to the leading edge of the cardboard carriage (lead screw nut end) that would influence the range of the stage:

These distances were a little difficult to measure with much accuracy. The stage would loose at least 70mm of its range in the current design or potentially more since the pawl assembly can be mounted anywhere along the length of the lead screw.

Catching up with you on the software side of our machine. I have attached the code and a “path.csv” to manage the coordinates for moves.

The file can be executed by navigating to the directory and typing “python pawl.py” I’d probably copy this into /examples/htmaa. Wasn’t sure if there were any other dependencies. For this round, I did not include the bootloader.