For this week’s assignment, I started to think about microgreens and how to grow them in a vertical farm. I am doing this to collaborate with my MDEF classmate, Guilherme Simoes. He is passionate about micro greens, aquatic plants, and vertical farming. I would like to apply these concepts to how we generate value within Indigenous communities.

The concept of the part that I 3D printed for this week is a planter that we can place seeds for cultivation in a wick system. Wick systems work in that there is substrate which supports the seedlings. Then, a wick of cotton or other fibre hangs down to take up water which runs in a 1mm thick film across the system.

The model is pretty simple. I use two cones to form a cup by using a boolean operation. I then created a base by using a torus which is in a union with the rest of the geometry at the bottom.

Once I finished modeling the part in FreeCAD, I then exported an STL. The STL was uploaded to the website, voronator.com. It takes a couple of attempts to successfully process. I checked the advanced settings and selected STL format and less holes. The STL from voronator is close to 40MB which is well over the file limit. I was able to overcome this by importing the model into FreeCAD and compressing.

I tried two printers within the lab. Originally, I wanted to use the Ender Pro PLA printer, but Eduardo Chamorro advised against it. We switched to SLA. I did one part in the Form 1+ and another in the Anycubic Photon S.

For both processes, the print time was shorter (4 hours vs ~9 hours) than what Cura estimated for a FDM print. I tried twice on the Form 1+. The first time, I left the print to run over night. That part failed. I did a second print on the Form 1+ at the same time as the Anycubic Photon S. Both came out well, it was easier to weed the supports for the Photon S print.

Once the part was printed, I had to clean and process the part in an alcohol bath. Then, I cured the part by exposing it to UV.

Time to have an honest discussion with children about Democratic Socialism

Last year, I spent Halloween dressed as Bernie Sanders while I 3D printed toys and treats for kids. I got a good workflow going from designing pixel art in GIMP, to converting the designs in vector in Inkscape, and then extruding the models in blender. There was just one problem: the models that I was printing were subtractive and not additive.

I found that the difference between additive vs. subtractive processes were difficult to articulate in design. The actual part from the Halloween activity was additive by how the model was rendered in Makerware or Cura. The part is hollow, aside from a honeycomb interior supported by external walls. That said, a subtractive method such as machining wax on the mini-mill could achieve the same external shape.

So, I thought about it for a year…

One day, I decided to search for additive design which led me to Danish architect Jørn Utzon and his work on “Additive Architecture.” Utzon observed the “growth principle in nature” which inspired a belief that buildings should be organized freely. Instead of starting with a box and subdividing the interior with partition walls, an additive method starts with components that could range in variety yet assembles them in such a way to achieve harmony.

Those were some pretty thoughts, but I didn’t have an “Aha!” moment until I saw a video in my Facebook feed…

A red ball rolled down the streets of Toledo, Ohio. It was part of an exhibit for the Toledo Museum of Art. Wind and rain from a storm freed the giant 15-foot wide ball and sent it fleeing museum staff members that hoped to capture and return it. 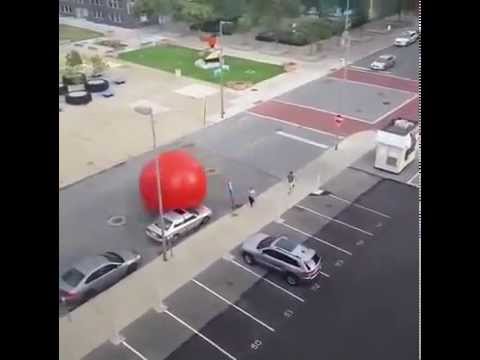 Seeing this ball reminded me of Katamari Damacy, a video game about rolling balls along any scale of surface. You start small by rolling pencils, pins, and mice; ultimately the ball becomes so large that you can roll up: cows, whales and Godzilla. The clump of animals, vehicles, and buildings is then judged by the King of the Cosmos. He decides whether the product is big and impressive enough to become a star. Seems like the perfect metaphor for Fab Academy.

NOT SO FAST: you forgot to wrestle with machines and troubleshoot

Ah yes, my first set up of an Ultimaker 2 came from Fab Lab Roxbury @ The Impact Studio. We had two printers from FAB11 which were donated to local labs after the conference. The printers were packed and stored until they were ready for delivery. One of the printers still had filament loaded while it was packed and stored. What happened in that situation is that the PLA became brittle inside the Bowden Tube. It was difficult to extract the material without snapping inside the curved tube. I managed to push the trapped material through the tube with material that was still on the spool. I was still very careful not to break the spool material as both pieces were subject to the elements while in storage.

At FAB@CIC, we experienced similar problems with the PLA filament. Indoors, during the Summer in Boston, we ran the central air conditioning to cool rooms and larger spaces. Most of our filament was stored under workstations for 3D printers and became brittle at a time when we were printing prosthetic hands for the eNable Hand-a-thon. We solved the problem by buying an indoor humidifier.

PLA presents a problem for deployment and storage. It’s not due to regulations. Rather, we have to carefully balance the nature of the material with the environmental challenges of prospective or existing Fab Labs. A lack of humidity causes the material to dry and break up. Too much humidity and the material could expand in the Bowden Tube and lead to clogs. Sending filament to India, for example, we have to consider the heat and humidity. We decided to ship and store filament in air tight buckets with silica inserts.

Of course, I could just source PLA from New Zealand. I hear Diamond Age Solutions is pretty good…

Leveling with the Ultimaker

The goal of FDM (Fused Deposition Modeling) is to allow molten material to be extruded and consistently laid onto the build plate. Ultimaker provides some good visuals as to what is and what isn’t a good first layer. What I noticed from my first few attempts at printing was that material just barely made an impression on the build plate. It took some layers for the part to show up at all. This was due to our build plate being too close to the nozzle. Ultimaker does have on-screen instructions to help with leveling. Still, when you live in a country in which people live and die without knowing the metric system; you can easily mess up a process that starts with “make sure the nozzle is 1 mm away from the build plate.” The best way to eyeball the process that I found was to think of the materials diameter which then gets extruded through the diameter of the nozzle.

Going Straight to the Ulti-Source

I spent time with Luis Rodriguez of Ultimaker to go through basic warranty and service training for their line of printers. We went over tips and tricks for proper maintenance of the printers as well as workflow within Cura to send jobs to the printers.

The current model, Ultimaker 2+, has several revisions to the Ultimaker 2. An upgrade kit is available for those with the previous model. The U2+ has a geared feeder, a swappable nozzle, and optimized airflow. This allows for improved freedom of choice for materials in terms of diameter. The first tip was to wipe and keep surface clean and free from dust. In terms of fixturing, Luis and his team have seen users spray hairspray onto the build plate which works. The problem comes about when the user sprays the build plate inside the printer and the spray goes on to rails and pulleys. There is grease packed in with the printer. This is only intended for the Z-axis threaded rod. For the X and Y axis, Luis suggested machine oil. A brass brush was best for keeping the nozzle clean. Nylon was the suggested material for the Atomic Pull method. Luis also suggested clipping the end of the filament at an angle before inserting in the feeder. It’s similar to trimming a threading before pushing through a needle’s eye.

As far as workflow in Cura, once a model is loaded the steps are to select the nozzle and the material. Layer view can simulate how the part will print. Luis also demonstrated taking individual models and doing modification per model in Cura. Then, the multiple models can be merged into one and a single gcode can be exported from Cura.

I also learned about another type of filament known as PVA. This is a water-soluble material that can provide support for FDM additive structures. In the future with an improved FDM dual extrusion process, more complex parts can be printed with a combination of build and support material. With PVA, the parts can be weeded out with a bath that will dissolve the support material and leave the model. This would improve my results of printing a clump of paper clips that surround a sphere.

Last year while taking Fab Academy at the South End Technology Center, I spotted a cool lion statue two blocks down Columbus Avenue. I wanted to capture it using 123D Catch on my iPhone.

I tried a couple times to capture the lion. As a free app, there’s not much support and the model can take several hours to process once loaded to Autodesk’s service. In order to completely scan the statue, I would have to take more pictures from consistent distances and angles.