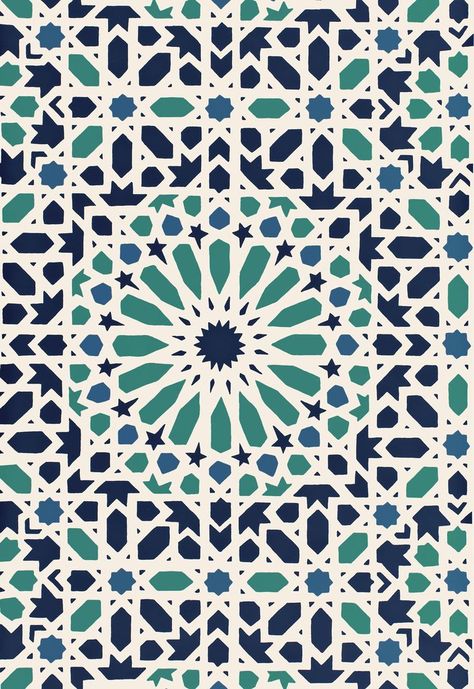 I used those quotes throughout the academy, they were very helpful.

The world is poorly designed. But copying nature helps.

Design can be the process of rearranging the elements of your environment .

I will try through my Fab Academy to put in perspective an old innovation or practice each week using a mix of old and new techniques.

If we spread knowledge, provide access to technology with no limits to everyone letting them develop solutions for their own problems using their accumulative heritage, We will have communities with sustainable cities and neighborhoods.

To do almost anything can easily mean to fix every problem.

In this part, I will describe my final project concept, and how I am planning to make it.

Mashrabiya : (Arabic: مشربية‎), is an architectural element which is characteristic of traditional architecture in the Islamic world. It is a type of projecting oriel window enclosed with carved wood latticework located on the upper floors of a building, sometimes enhanced with stained glass. It was traditionally used to catch and passively cool the wind; jars and basins of water were placed in it to cause evaporative cooling. 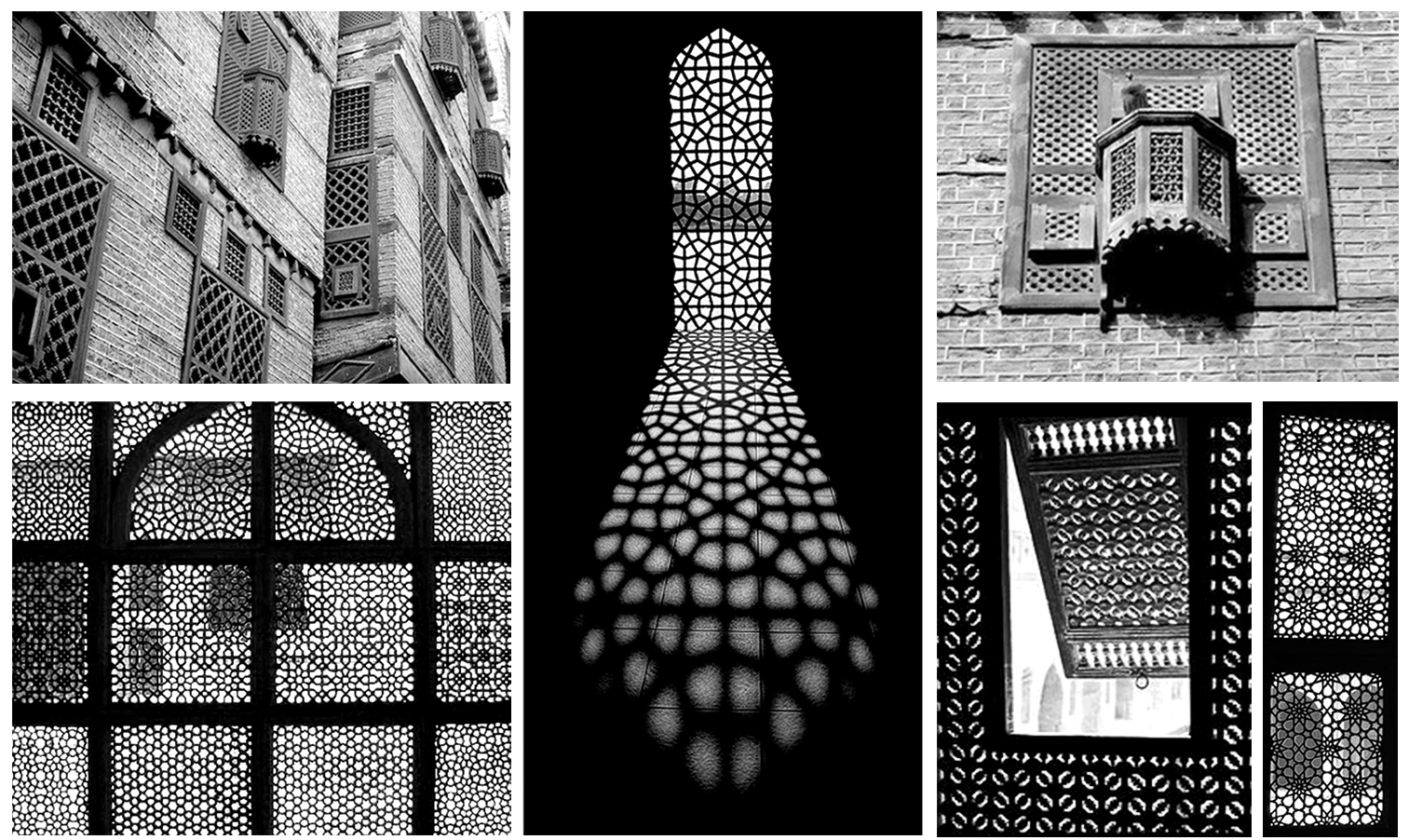 One of the major purposes of the mashrabiya is privacy, an essential aspect of Arab and Muslim culture. From the mashrabiya window, occupants can obtain a good view of the street without being seen.

The mashrabiya was an integral part of Arab lifestyle. Typically, people did not sleep in any assigned room, rather they would take their mattresses and move to areas that offered the greatest comfort according to the seasons: to the mashrabiya (or shanashil) in winter, to the courtyard in spring or to vaulted basements in summer.

This qulla might be placed in a mashrabiya for passive cooling The wooden screen with openable windows gives shade and protection from the hot summer sun, while allowing the cool air from the street to flow through.The designs of the latticework usually have smaller openings in the bottom part and larger openings in the higher parts, hence causing the draft to be fast above the head and slow in lower parts. This provides a significant amount of air moving in the room without causing it to be uncomfortable. The air-conditioning properties of the window is typically enhanced by placing jars of water in the area, allowing air to be cooled by evaporative cooling as it passes over the jars.

The projection of the mashrabiya achieves several purposes: it allows air from three sides to enter, even if the wind outside is blowing parallel to the house façade; it serves the street, and in turn the neighborhood, as a row of projected mashrabiyas provides shelter for those in the streets from rain or sun. The shade in normally narrow streets will cool the air in the street and increase the pressure as opposed to the air in the sahn, which is open to the sun making it more likely that air would flow towards the sahn through the rooms of the house; the mashrabiya also provides protection and shade for the ground floor windows that are flat and usually unprotected. 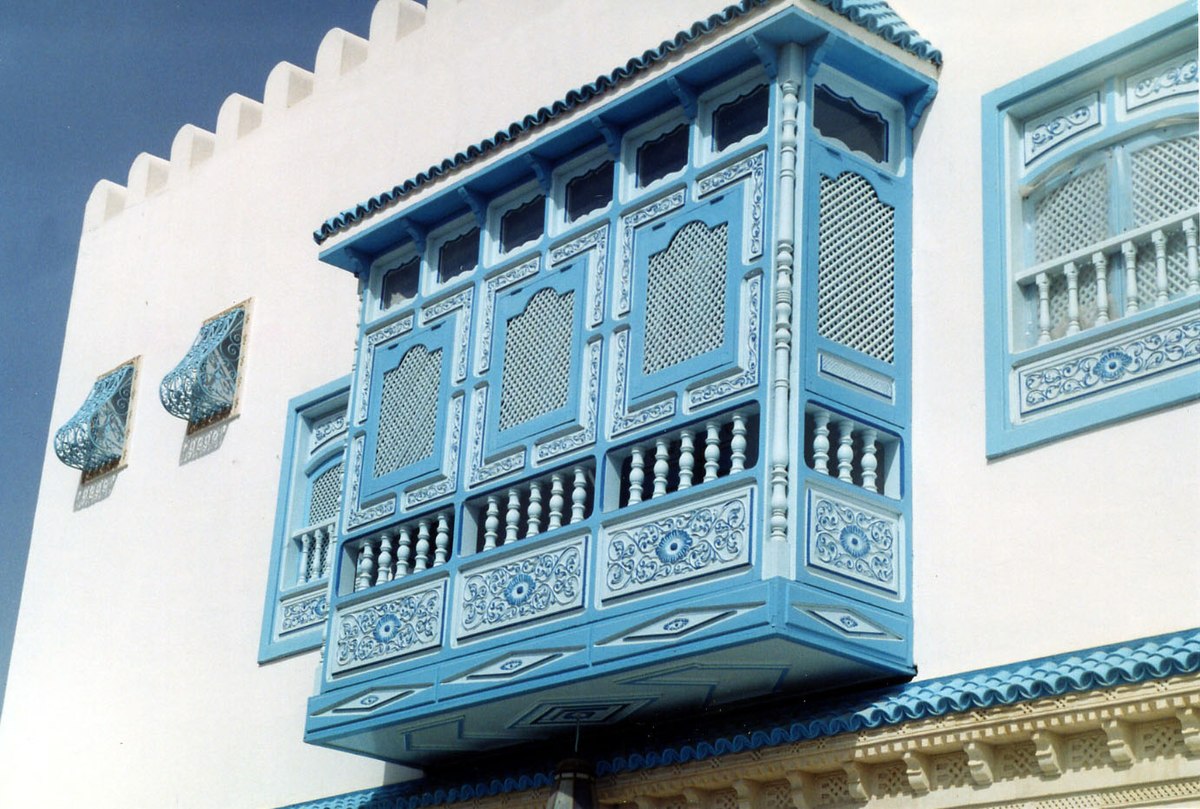 A mashrabiya of Cairo in the 1800s from the inside, as a setting for an imaginary scene One of the major architectural benefits is correcting the footprint shape of the land. Due to winding and irregular streets, plots of land are also commonly irregular in shape, while the house designs are regular squares and rectangles. This would result in irregular shapes of some rooms and create dead corners. The projection allows the shapes of the rooms on the upper floors to be corrected, and thus the entire plot of land to be utilised. It also increases the usable space without increasing the plot size.

On the street side, in addition to their ornamental advantage, mashrabiyas served to provide enclosure to the street and a stronger human scale.[24]

front elevation and a section for a Mashrabiya in Cairo. 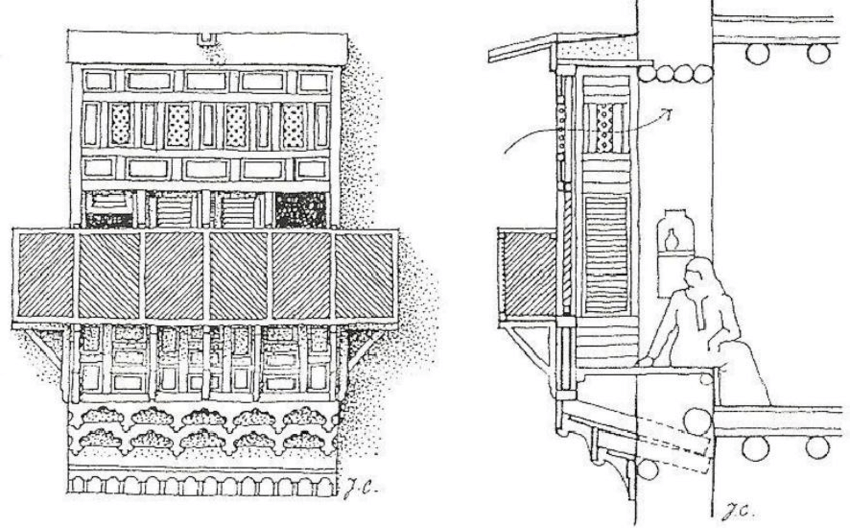 Explanation: so as the hot air goes up the court it creates air pressure the will make the outside air enter from the Mashrabiya where its temperature decreases due to evaporative cooling. This whole process will achieve the feeling of thermal comfort to the users because of natural ventilation.

So since Mashrabiya is part of passive building system made of courtyard and windows then if we want to put it in our modern day apartments we need to motorize it to make it easier to use .

We usually start working on Mashrabiyas by creating the 2D patterns you can check how we do these patterns using parametric software.

Check how I do it Here .

Arabic geometrical shapes are drawn based on angles and circles. patterns are categorized based on the number of times the main circle is divided.

This a video the shows how we draw it manually.

as we under stand the way those geometrical shapes are made we can to a limit define the way we can move them , for example if we want to move one of the elements all wee need to do is to move it time by time using the dividing angle for example in my case I had to rotate it with a 30 degree each time. and this later on made it easier for me to choose the out put which in my case I used servo motor, also helped me coding the project as the moves are expected.

I did a manual test to verify my idea, what I did is I cut multiple layers with different openings and used MDF and acrylic. later on you will see how more options are available if we duplicated the layers. 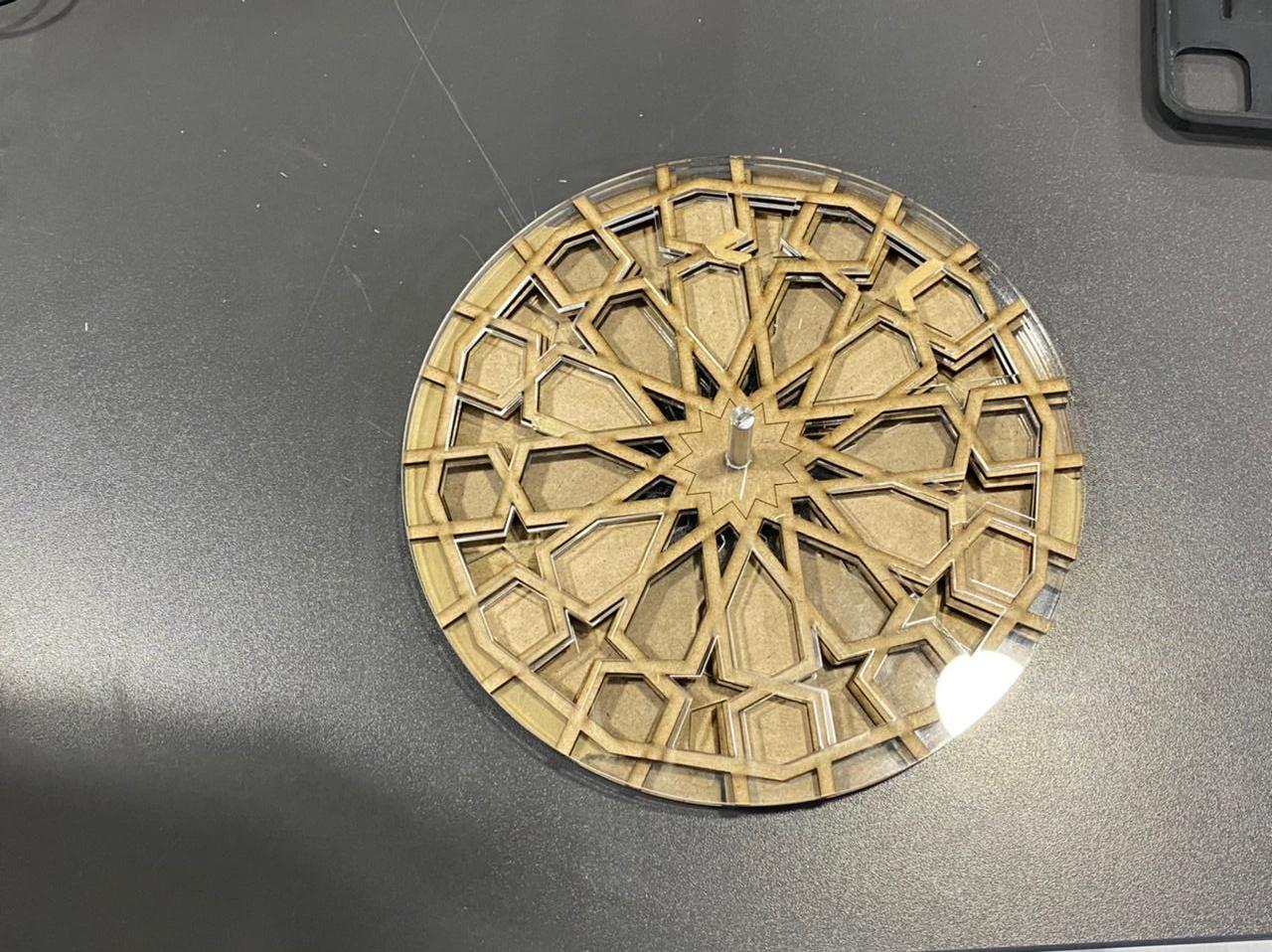 the first image shows how all the layers are aligned to achieve closed unit, in the second image I am trying to show that if we moved the middle layer in 30 degree rotation we can achieve an open tile/ unit. 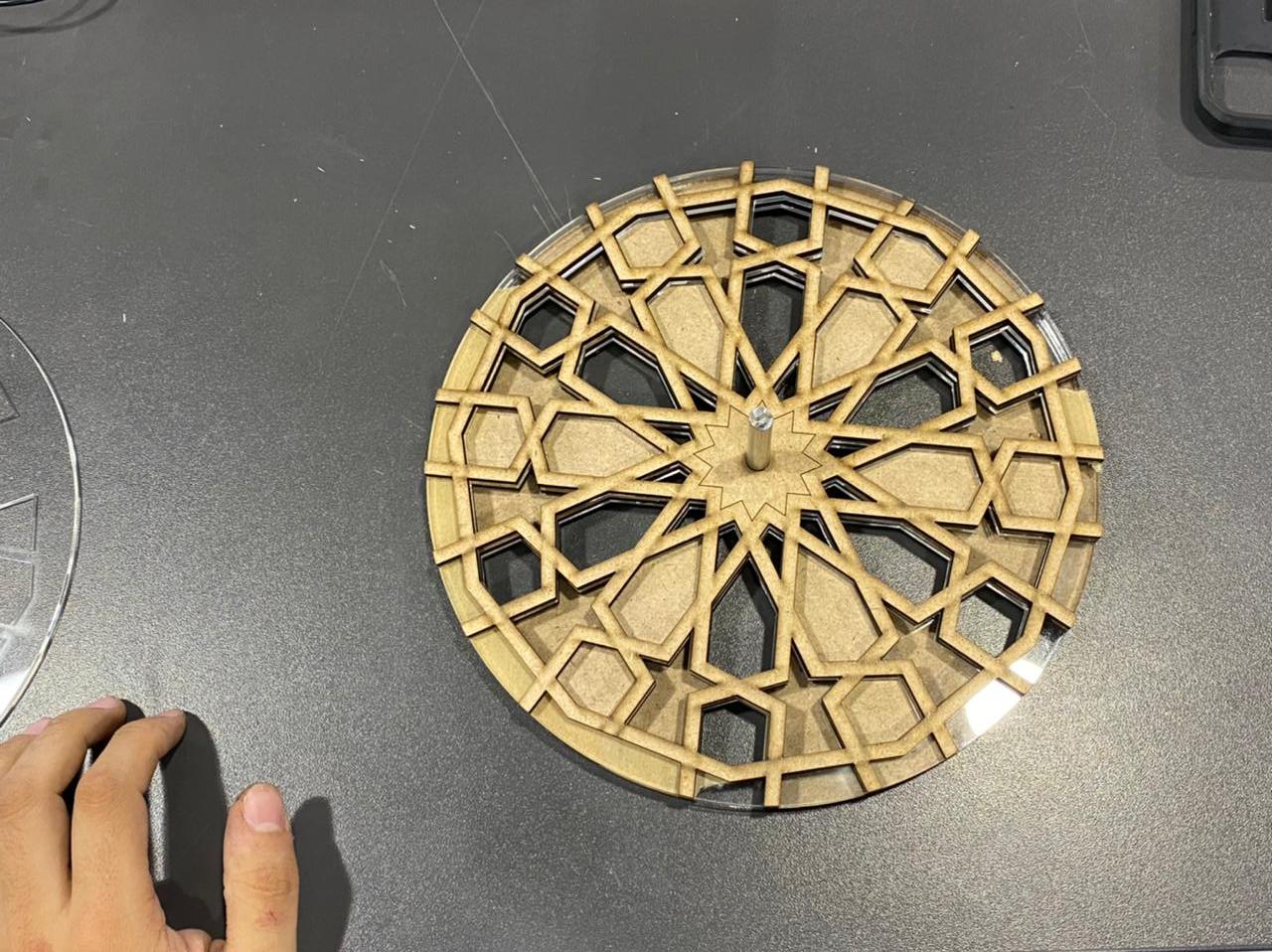 what will happen if we moved half angle? like for example 15 degree ?

we will have more complex shapes. 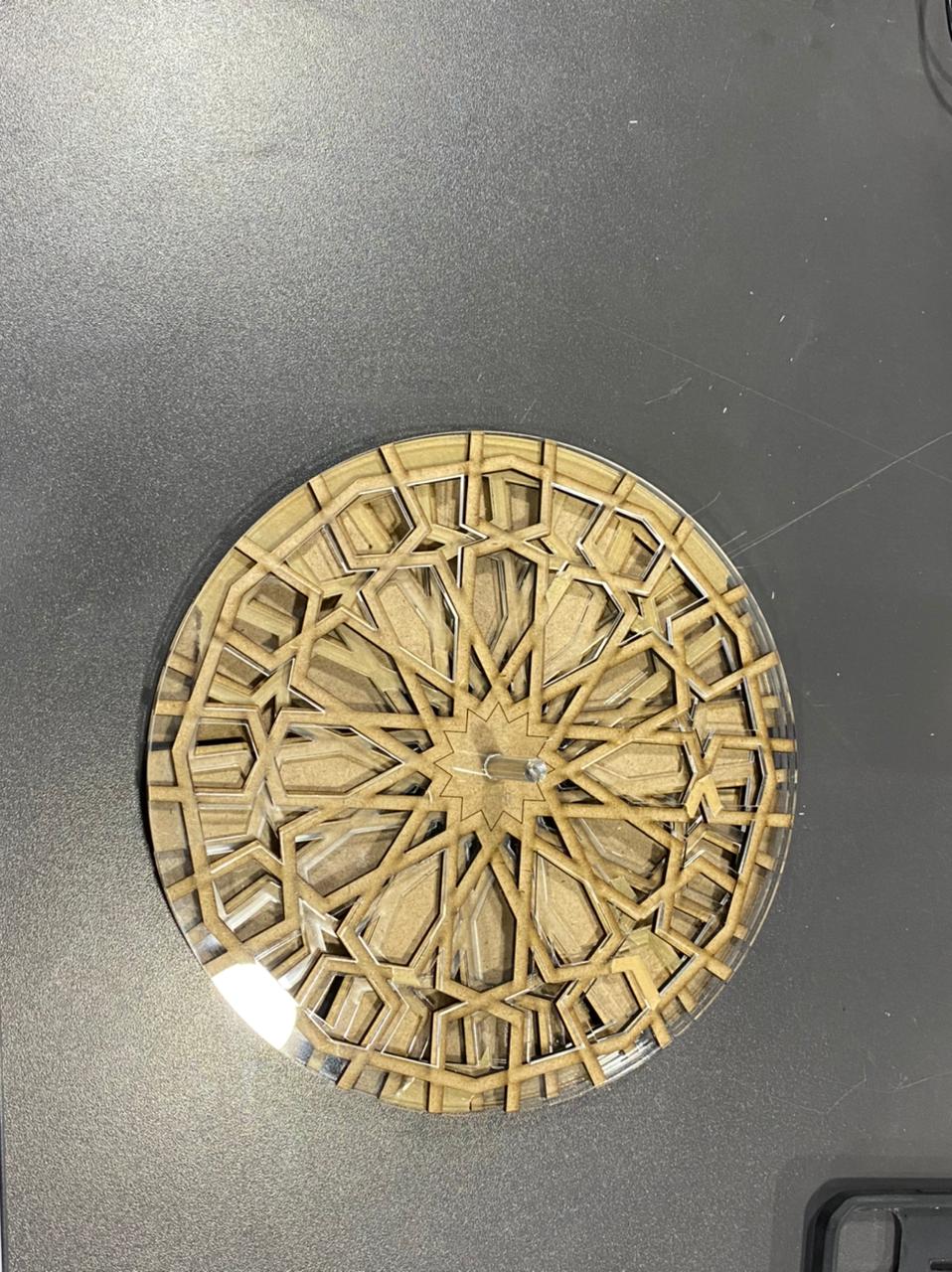 the following list of videos shows how the project may work. I moved each layer alone and stack them then did it again to see what possibilities I can have .

this is a gif in case you have bad internet connection.

As an architect I usually use AutoCAD as I am personally comfortable with and it really nice to use it with .DXF files

those are some tests that I did during the process 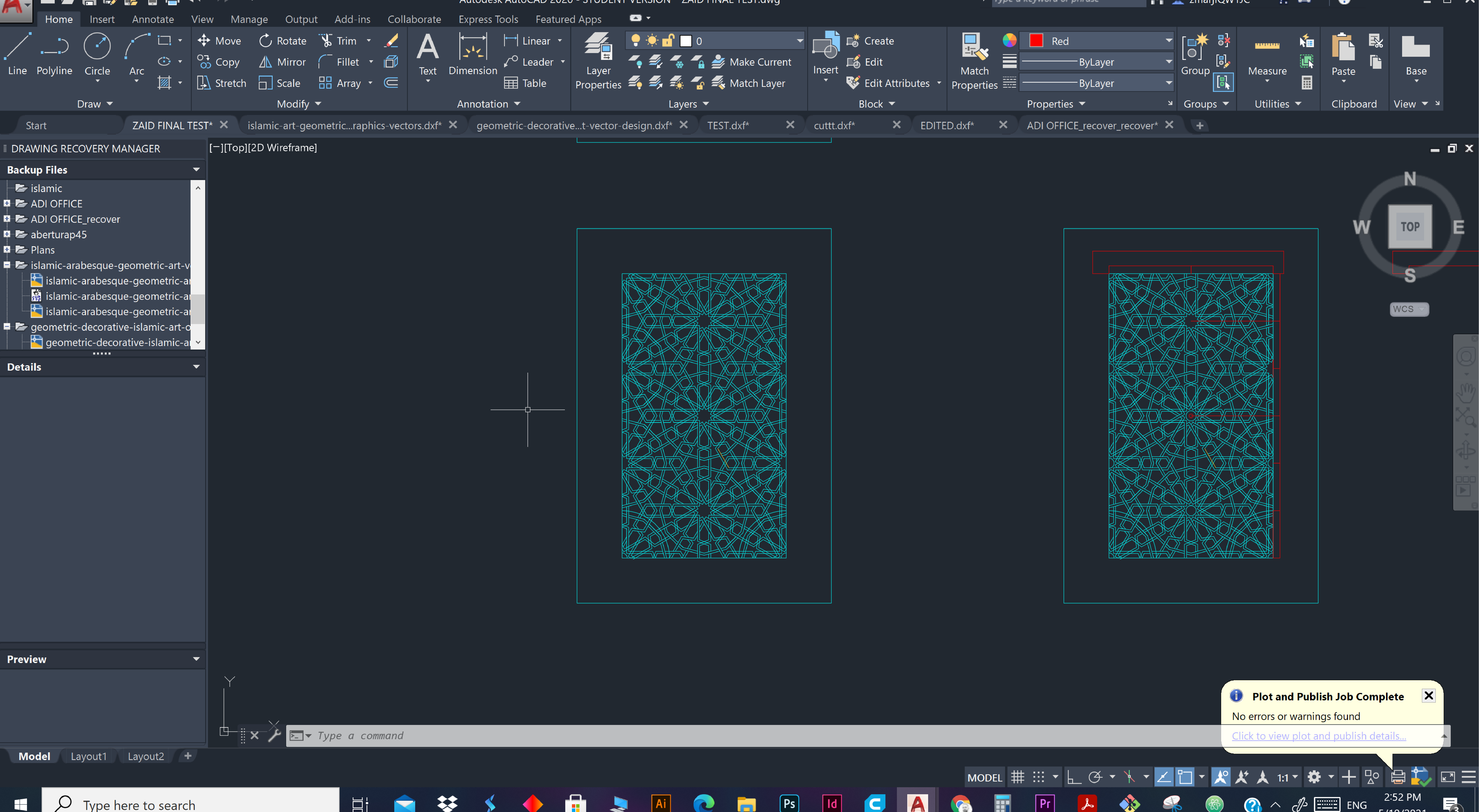 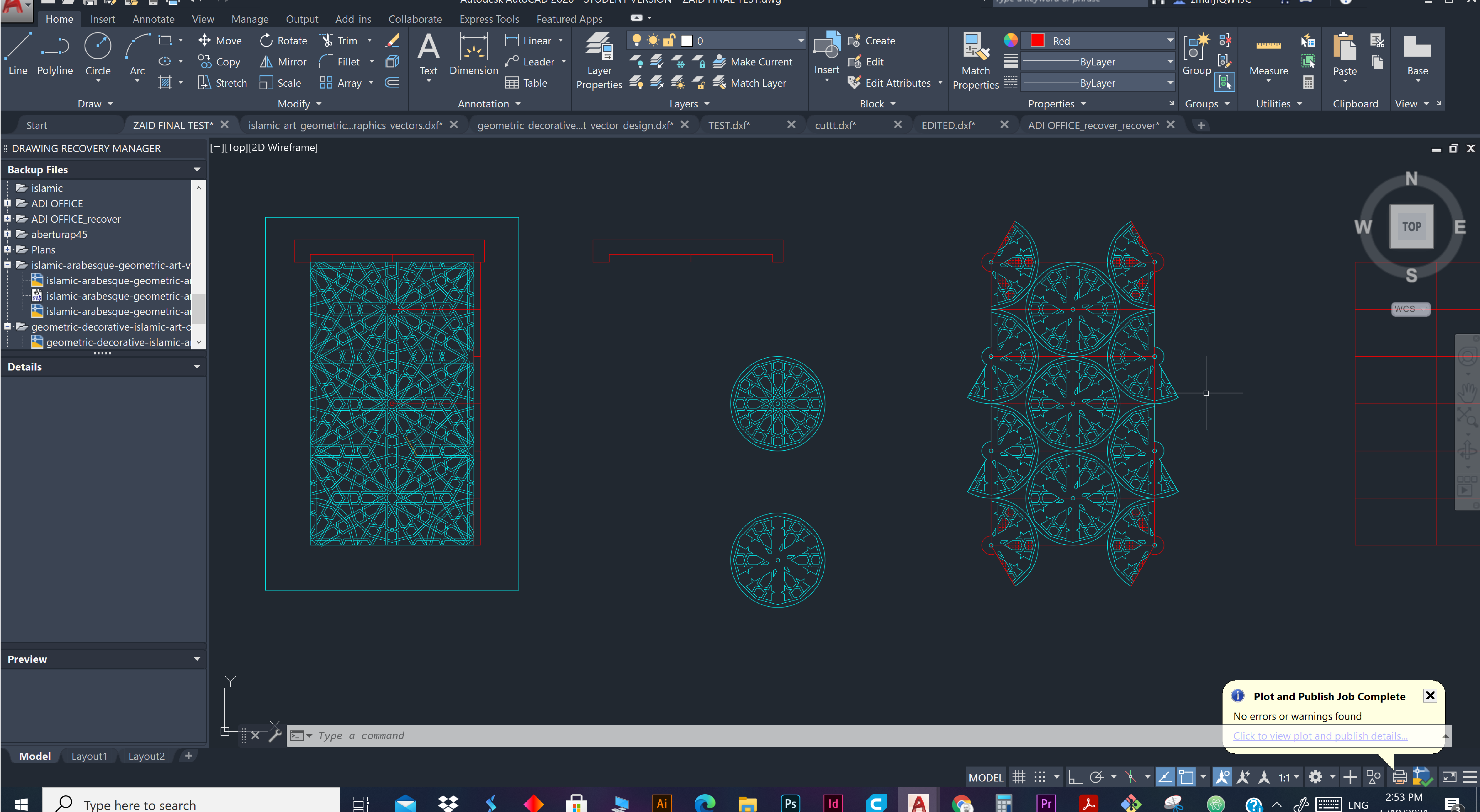 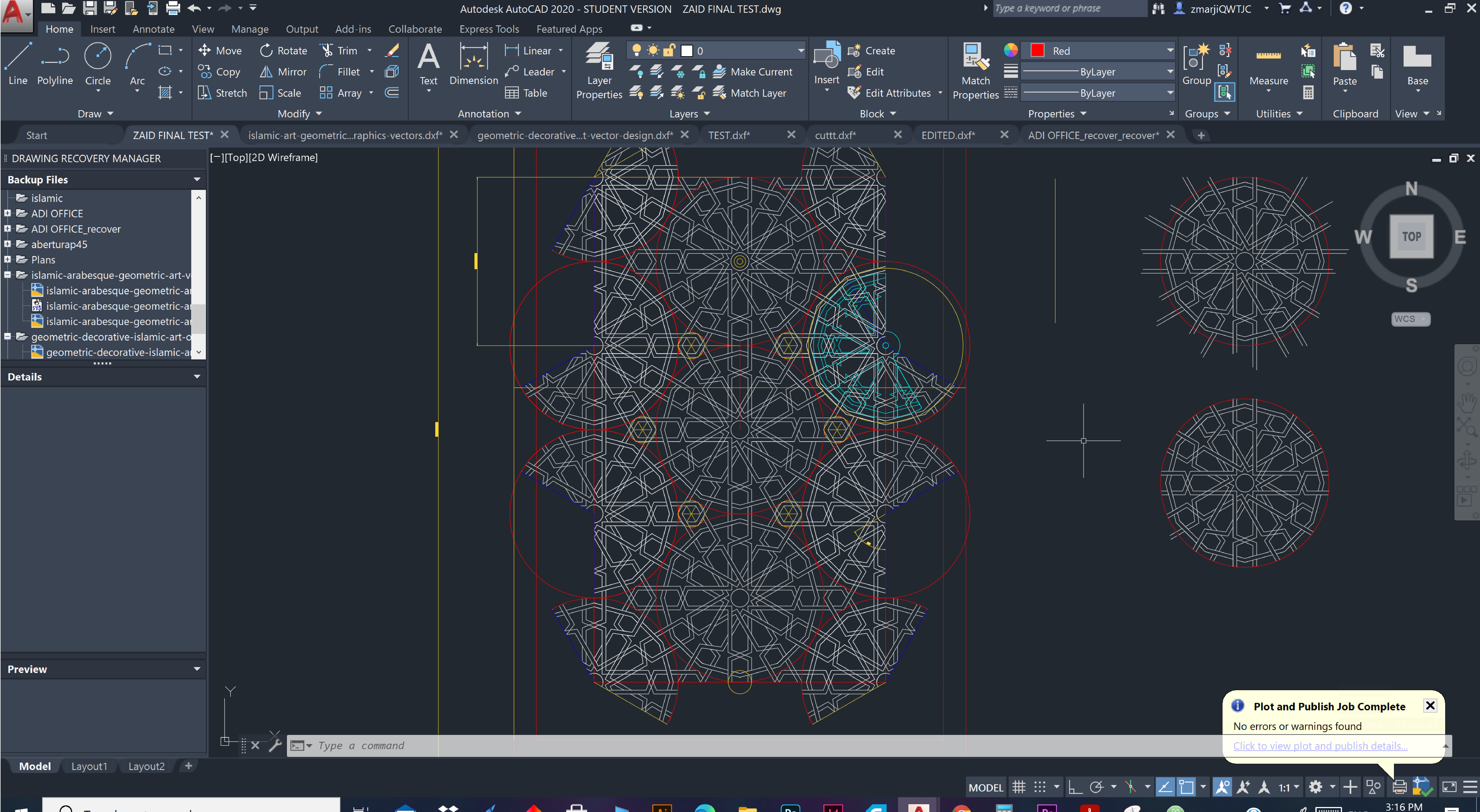 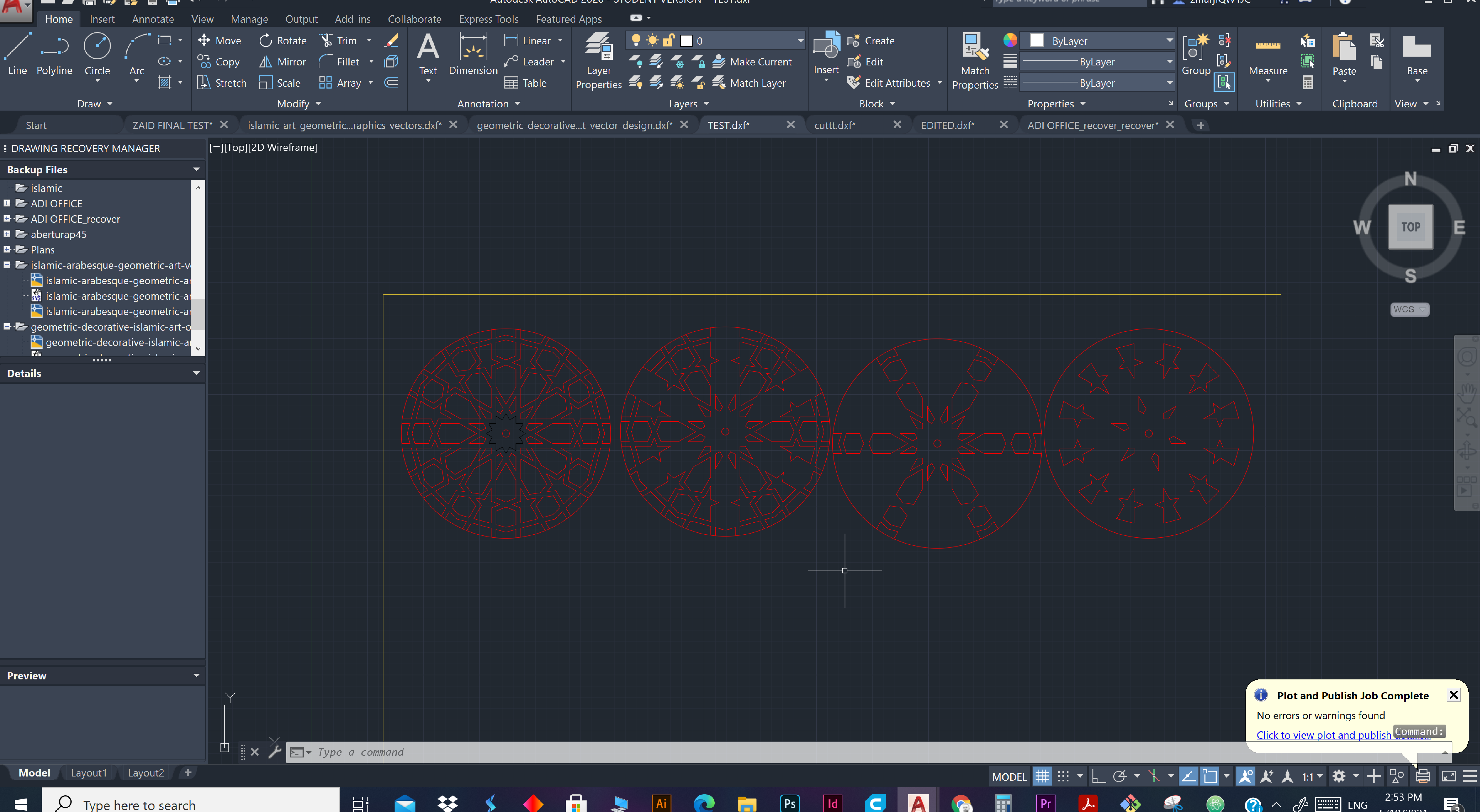 Mashrabiya can be used in new apartments, or hot areas as a part of the passive design.

I usually worked with wood and cultural patterns and those are some of my trials that I am thinking to add later on . 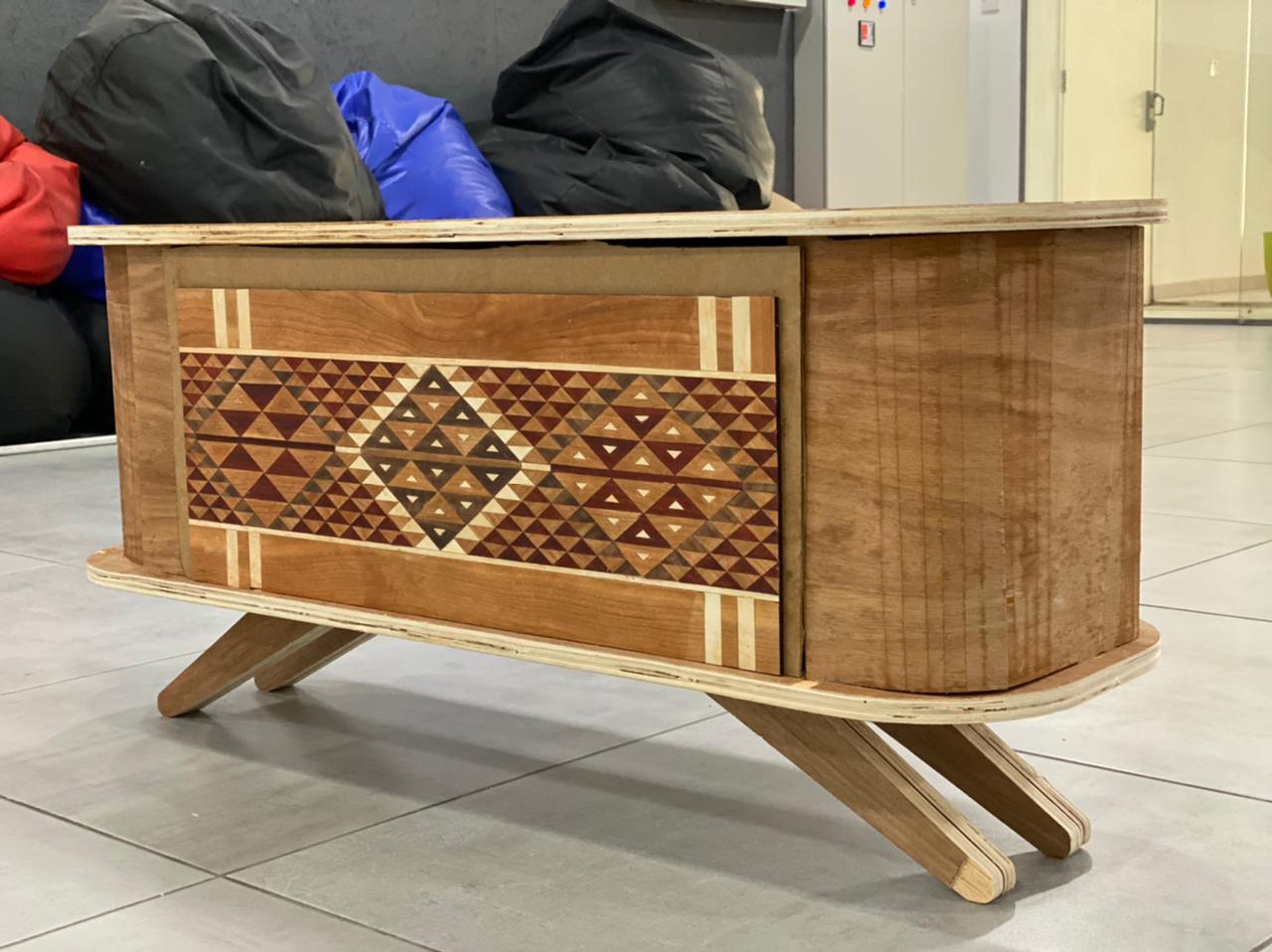 In 2017 I was introduced to the first Fablab in Jordan (Fablab Irbid). I agree with most parts of charter, and I find the idea of Fablab is very Impactful. If I want to change something in Fablabs it will not be in the charter itself. but in country like Jordan with a lot of crafts I would give more access to people who did not go to collage and usually non-English speakers to help them learn more. 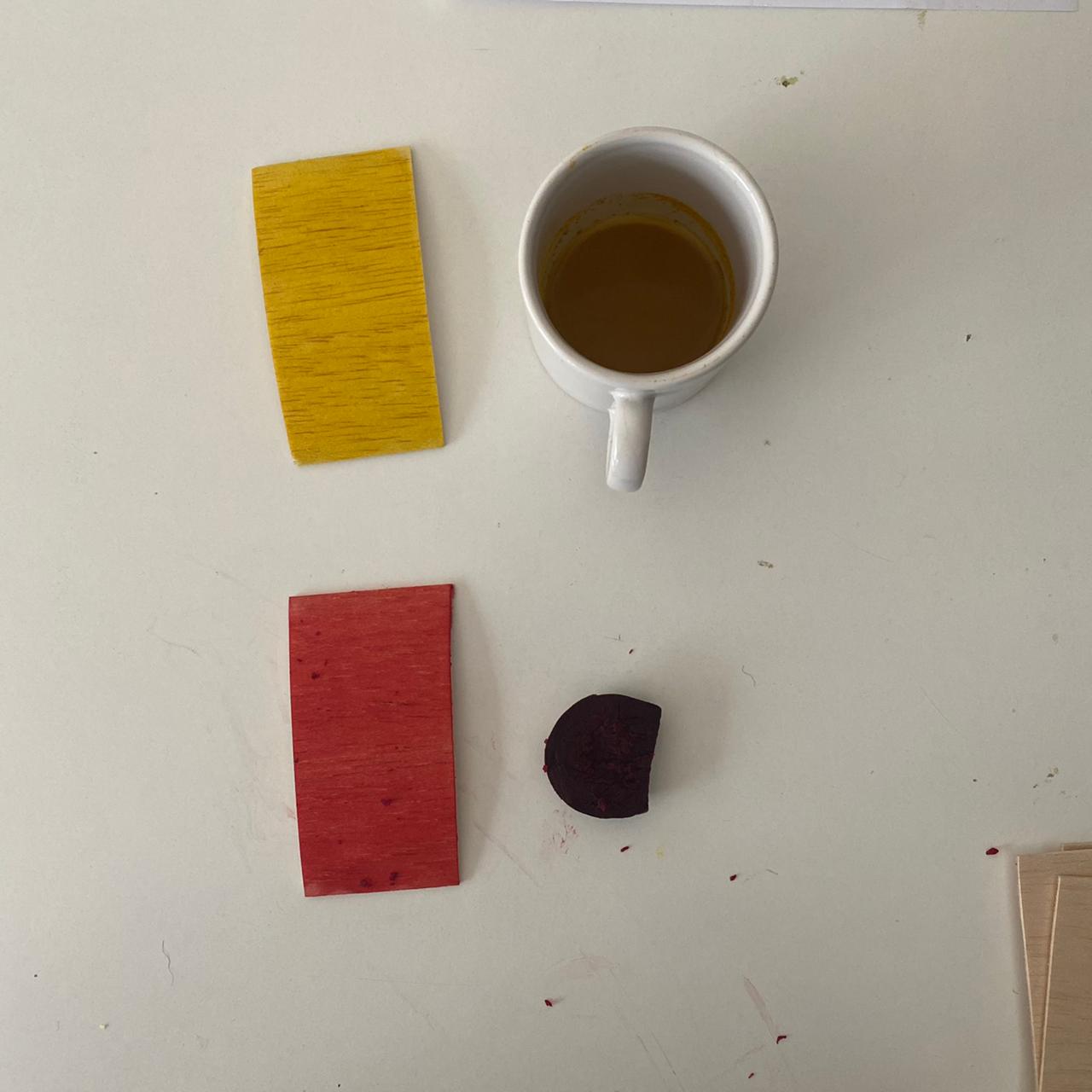 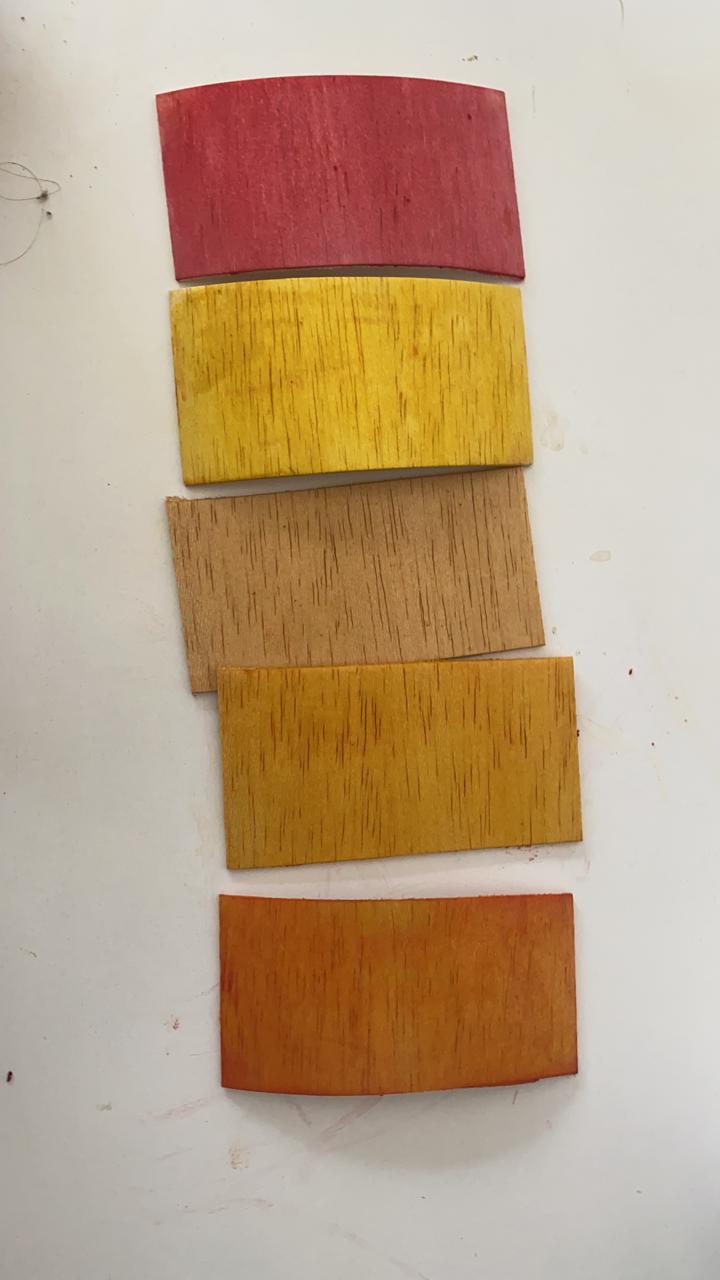 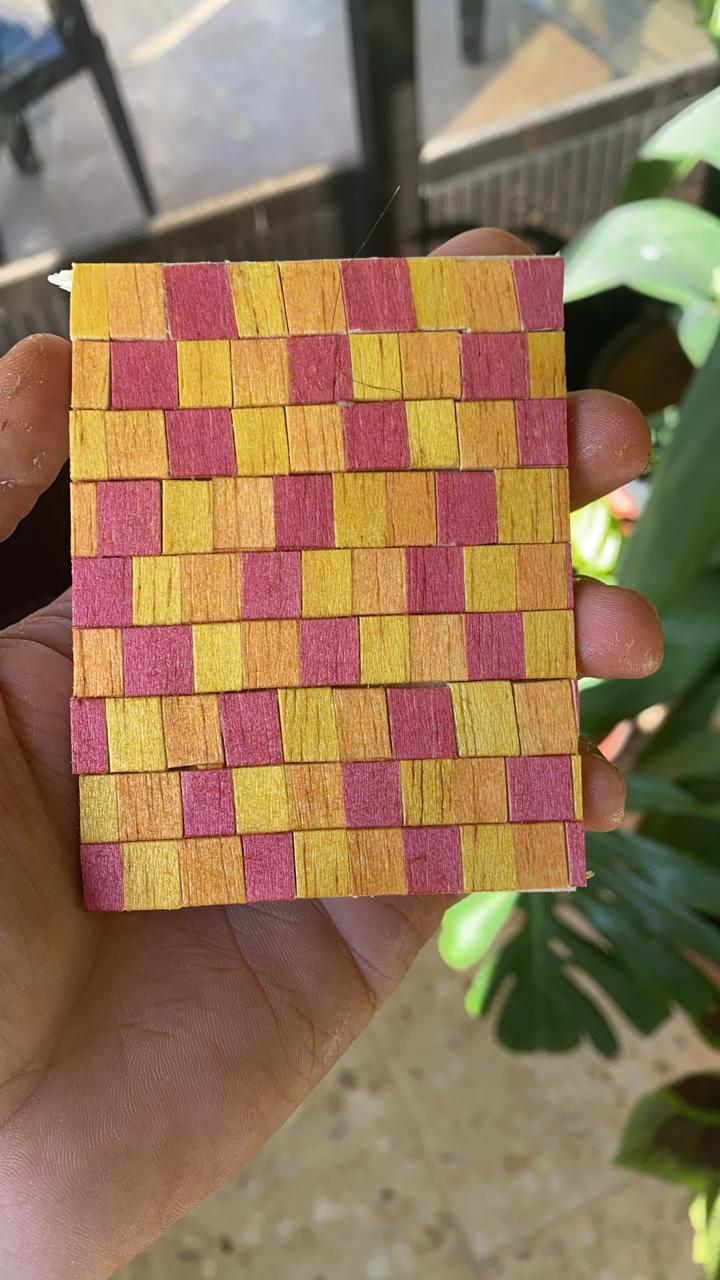 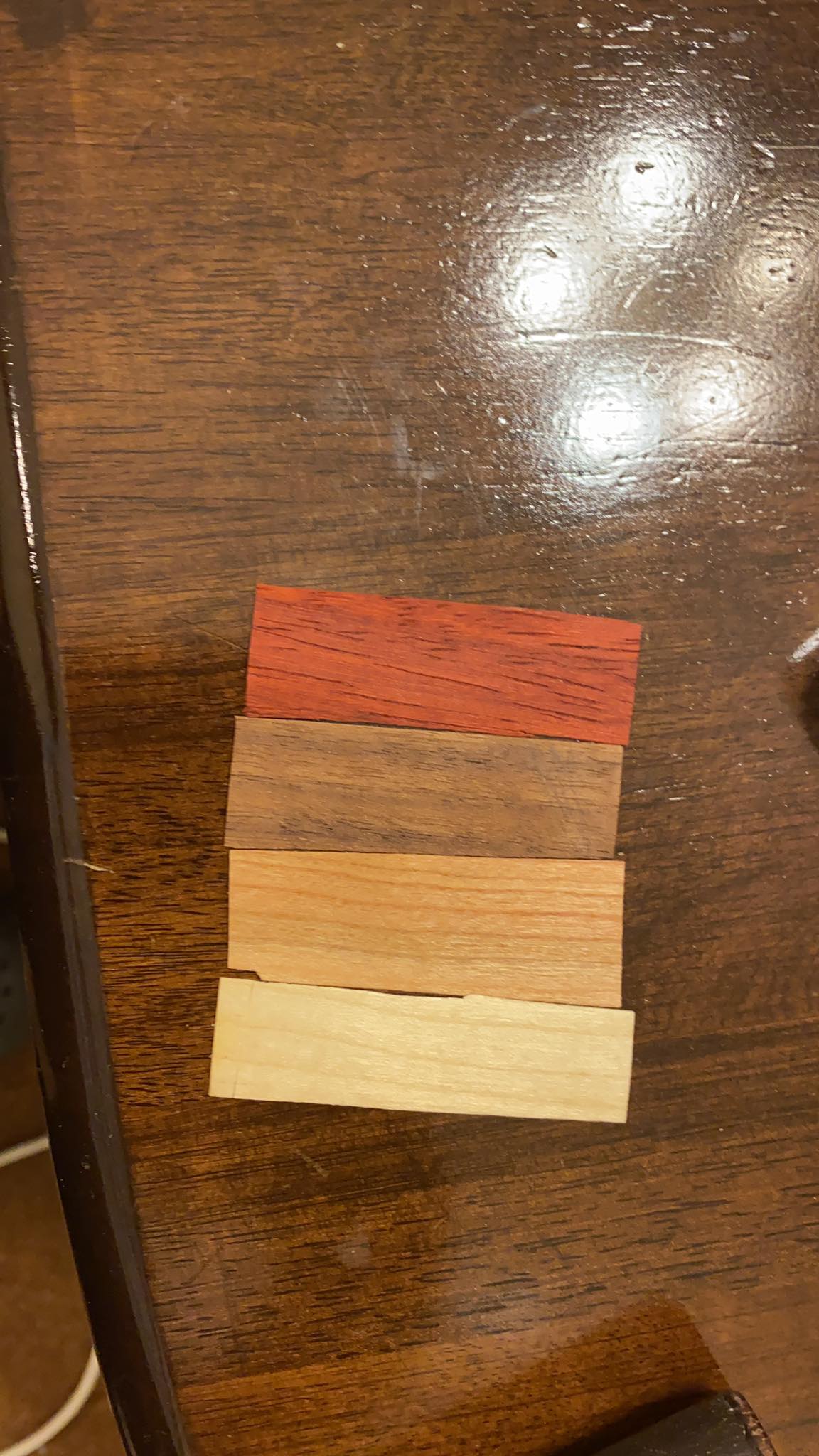 I will design a Hex tiles that has fabric and mechanical system with sensors to interact with thermal conditions.

those tiles are modular they can be shaped as a dome or as a building facade pattern.

how to do electronics

in Jordan we have domes architecture in wadi rum

this tool can be used in this dome 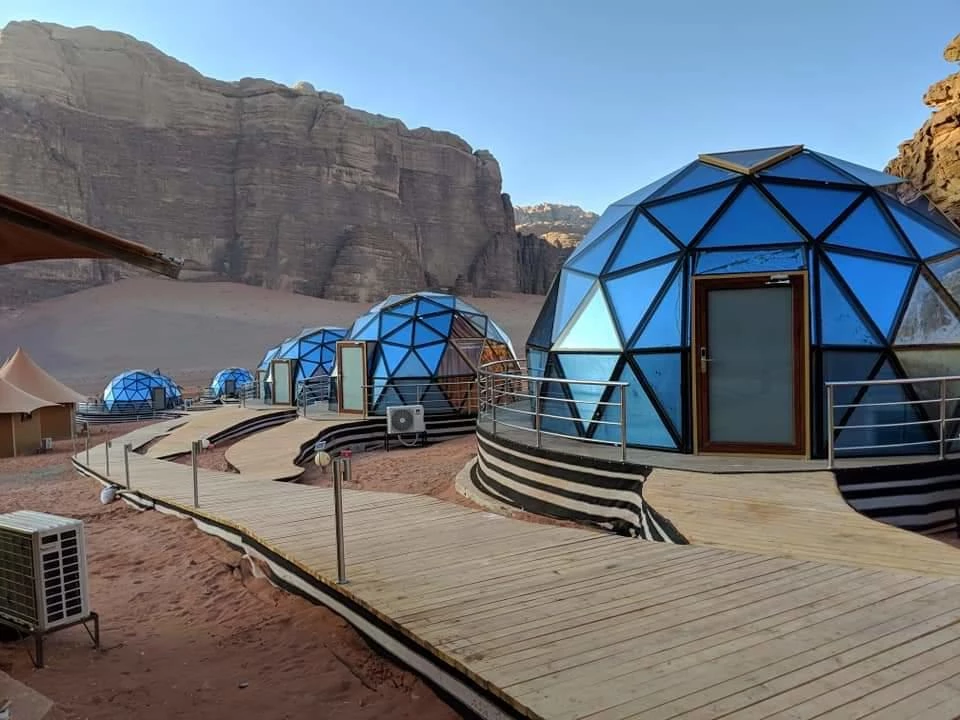 The Fab Academy is responsible for

I am a Fab Academy student, responsible for:

Signed by committing this file in my repository,