In this assignment we are allowed to use arduinos to run our machine. We were going to use an Arduino Uno with a Arduino CNC Shield to run the three stepper motors (the Arduino CNC Shield has room for four). The two server motors for the funnels will be connected directly to pins on the Arduino.

Set the current limit on the stepper motor

This site explains really well why you want to set the current limitation on the stepper motor. It says: “To achieve high step rates, the motor supply is typically much higher than would be permissible without active current limiting. For instance, a typical stepper motor might have a maximum current rating of 1 A with a 5Ω coil resistance, which would indicate a maximum motor supply of 5 V. Using such a motor with 12 V would allow higher step rates, but the current must actively be limited to under 1 A to prevent damage to the motor.” 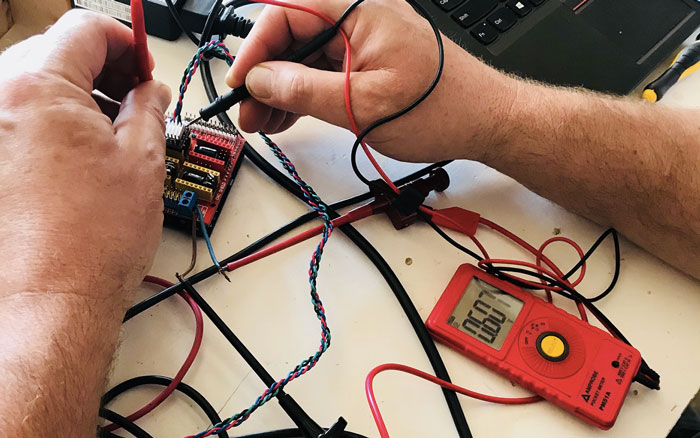 Something was very wrong when doing this, the multimeter went down to zero everytime we did the measurement. We figured that something must be wrong with the hardware, and after a while Johanna saw that one of the jumpers were broken. We replaced it and now it worked fine.

We had gotten some example code from Emma that we tried out to see if we could run the three motors at the same time.

For the machine we use 3 “DRV8825 Stepper Motor Driver Carrier, High Current” shield to drive the stepper motors. They are attached to the Protoneer Arduino CNC Shield. This CNC-shield fits on a arduino uno.

The programming is done on the arduino, so to understand what pin is needed for the project, we used these 3 images to get an overview. The first on is the scheme of the cnc shield. The shield we started with already had 3 DRV8825 shields on top. We used position X, Y and Z. The A position was not used. On the right sight of the shield were the connectors (4pins) to plugin the wires for the 3 steppermotors. Under each DRV8825 shield are 6 pins positions named MO, M1 and M2. We connected them all with jumpers to get 1/32 microsteps per step (so 200*32=6400) for a complete revolution. Our stepper has 200 steps per revolution. I didn’t mention that before :)

Another pin we used was the enable pin, to activate the motors, which is probably the E-Stop location on the scheme.

By reading the next image we could figure out what pins were connected. Digital 2-13 are all connected to the CNC shield. But, in our case, we only used D2-8. The analoge pins A0-A3 are also connected and used. Pin A4 and A5 are not used.

We were looking how to connect the button, to get a topping on you sandwich, and the 2 servos we needed for the funnels.

For the button it was quite easy. We used pin A5, because it was free.

To connect the 2 servos was more complicated because we thought that these servos needed to be connected to PINs with PWM functionality. From the arduino pinout below we knew that PWM is only available on pin D3, D4, D5 and D9, D10, D11. So the only pins we could use for the servos are D9 and D10 (and D11 also).

I wrote this script to test the tube extractor. And it’s working.

I connected the steppermotor to the X-position of the DRV8825 shield on the CNC shield. I put together this code:

go to the beginning of this page for a full description of the shields and pins or continou reading from here as in the next chapture i explain the code we used for the machine.

But first an impression of the working test code and the tube extractor:

the arduino code for our machine

Till now i only copied programms, removed bits i didn’t need and declared the pin numbers i used. So this was my first proper programm. I didn’t use the functions till now. Everything fitted in the setup or loop. So this week i learned a bit how to use them. A thing i liked is that it gives a better overview of the code, separating complexities in functions. Other things i used before but didn’t really understand where the “#declare”, “for” and “int”, so the “values (variables and constants)”.

In this explained of the code we wrote, i try to explain what i think they all do.

The beginning of the code starts with a couple of includes and variables.

The first block handles the include of a servo library and the variables of the 2 servos we use for the funnels. If you want to know more read the page of the arduino servo reference. We called the 2 servos myservo1 and myservo2.

Then follows a line that has to do with the random nummers we use for the stages. Long variables are extended size variables for number storage.

Pins for working with the cnc-shield are declared in the next block, followed by the pinnumber for the button. At this section on shields and pins you can see the schematics and explanation of the pins that we use in this code.

Going through the arduino references i noticed this description of #define. Next program i’m gonna try to use const….

To be honest we copied the first function from a arduino code we got from Emma. It handles the way how it will write LOW and HIGH according to the (micro-)steps and timedelay between the steps we handled in the first block. Anyway: it’s doing what it supposed to do :)

I will emma ask later on for an explanation.

For debugging serial is enabled.

Next comes a line to activate the randomseed(). Arduino reference for randomseed.

If it is important for a sequence of values generated by random() to differ, on subsequent executions of a sketch, use randomSeed() to initialize the random number generator with a fairly random input, such as analogRead() on an unconnected pin.

We used pin A0 for this, because it’s not used in our sketch.

After that we set the modes for the different pins. For the stepper it are all OUTPUTS, only for the button we used the pin as INPUT_PULLUP, meaning this pin is HIGH and when pushed puts the pin in a LOW state.

Last the servo pin are declared in the setup (pin D9 and D10), see this section on shields and pins.

The void loop() is pretty clean.

The void randoM() is the function that picks a random number between 0-4. So Random numbers are 1, 2 and 3.

The last functions are the 3 stages/positions.

First it activates motor Y connected to the stage. With a “for” statement it uses steps to go to the right position. In this case it does <8 steps, so it counts from 0 till <8 which is 7, in total 8 steps.

When it is in position is delays for 2000ms.

This open funnel is delayed by 2000ms, the hagelslag/chocolate prinkles are falling down.

Now the servo closes the funnel by doing the opposite as above.

Now the stepper motor Y is going back home, same as above, but in thee opposite direction.

When home, 2000ms delay, before it goes again in the loop function, starting over the whole process.

The other stages are activating the other servo (position 3) and another stepper that is emptying the tube (position 4).

The code used for the tube only does a half revolution, that should be enough for the ketjup to be pushed out.

First Hanna assembled the system for closing the funnels. She discovered that that the connection between the metal rod and mdf half circles has to be redesigned to make it more stable. She added a circular extension to the centre of the half circle where the metal rod could go through, so that it would be held in place when turning. (Right photo below) Then Hanna found and adjusted a sweep code for servo motor for opening the cover 180 degrees with the speed of 5ms between every 1 degree step and 2000ms pause after opening and closing:

Then Hanna tested the code first with the empty funnel to check how the cover opens and closes:

And after that also with sprinkles:

When the system was working more or less fine Hanna attached the funnels onto the machine. After we had tested the funnels and the tube system we were ready to assemble and wire the whole machine. Jelka re-wired the Arduino to the inside of the machine. First she took a picture of how everything was connected. Then she used tie wraps to attach the Arduino to the machine and some more tie wraps to hold the wires. Later Henk also put a duct tape. Emma really wasn’t happy with the wiring, so Jelka improved her work on this. She soldered the wires to the red button instead of using alligator clips. She made some of the wires shorter and led them to the hole in the middle panel. A picture of the original wiring as a reference The Arduino attached to the machine The total wiring. Emma was not happy with this. The look of the wiring from the front

When the wiring was done, we could also really assemble the machine. We had some trouble with fitting in the big motor for the ketchup tube. The housing was a bit to big. In the end we decided to not put on the back panel and to use duct tape to keep the upper and the middle panel in such a distance that the funnels would fit it without the openers falling out every time the topping motors turned.