For Laser Cutting:
Explained how you parametrically designed the files.
Shown how you made your press-fit kit.
Included your design files and photos of your finished project.

For Vinyl Cutting:
Explained how you drew your files.
Shown how you made your vinyl project.
Included your design files and photos of your finished project.

We will need parametric tools such as FreeCad, which is parametric. This means that when you edit one measurement of your design all of the other ones change proportionally.

For blender: download Sverchok plug-in.
Fusion is parametric.
Other useful tools: CAM - Print Driver. It turns your drawing into a path so that the machine can read it.

The vinyl cutting assignment allows for a lot of flexibility:

You can make folds, transfer letters or screenprints.
3M 1 epoxy: cast expoxy film thatcan be used to make flexible circuits.
Glass etching: It requires a bit of skill, the amount of pressure, the depth of the cut, the speed. A test cut is necessary.
Fusion 360 can also be used for prepping the cuts and folds.
You have to use the 123DMake: Slicer plug-in. It parts from a 3D model and then it unfolds it for you.

For the laser cutter:

Half toning can be used for screen printing.
Press-fit construction: 2D cutting strategy where the pieces can be cut and assembled into a 3D object.
Bendable laser cutting: it can be used for living hinges. Look at the Inkscape living hinges extension.
Rhino command: Make2D - it redraws all the necessary lines.

I was in a team with Jean-Baptiste Natali, Niccolo Gnecchi and Daniel Zuehlke. In the FabLab BCN, we use the Trotec Speedy 400 laser cutter. The datasheet can be foundhere. This machine has a working area of 1000 x 610 mm. It accepts materials with a maximum height of 305mm. The power of the laser beam ranges between 10 and 120 Watts.
Below is a picture of the notes I took during the assignment:

We first ran a test file on 4mm corrugated cardboard. This design allows you to visualize different cut and engraving speeds, powers, and frequencies. It can be found under this link:

In order to send the file to the cutter, we used Rhino and the Trotec proprietary software, Job Control X Expert, downloadable here. For more details, pleases refer to section 3.2. Below is an example of the different results we got:

From this assignment, we concluded that:
Using wavy cardboard as a test material is not the most accurate way of measuring the kerf. Because it is a soft materials, the ends of the cut bend and sink in.
We found out that our laser cutter has a kerf of 0.1 mm by cut when properly focused. This means that each time the laser beam makes a cut, 0.1 mm of material will be lost. It is important to keep that in mind when making a structure held together by a press-fit construction.
The optimal settings for vector cutting are:
Power: 25-27 Watts
Speed: 0.9
Frequency: 1000 Hz
The optimal settings for raster engrave are:
Power: 50 Watts
Speed: 0.9
Frequency: 1000 dots per inch
Since the kerf is 0.1 mm, a snug pressfit construction will require a dimension of 3.8 mm.

I imported into blender an svg file of a diamond. These files can easily be found easily online as Protein Data Base. The files are downloaded in a .pdb format. When you import the file into blender without changing any import settings, you get a figure like this:

Since the size of the carbon atoms is proportional to reality the bonds were not visible. I therefore followed the following tutorial to import the allotropes:

I therefore tried opening the same file in blender but applied the import settings mentioned above and saved it as a personal preset.

I then decided to go for a pyramidal shape of the same diamond structure as that is more simplified. I had to delete the additional tetrahedrons to simplify the figure. However, because the original file was not created by me, I couldn't find a way to ungroup the atoms myself. After trying for a couple of hours, I had to ask a programmer friend who is very familiar with Python to make those changes for me. Once opened, the file looked as follows:

I was hoping that once this model was made, the process would go smoother. I wanted to import the Blender model into Fusion 360 and then use Splicer for Fusion to get a 2D drawing for the laser machine to read. It was however much harder than I had initially anticipated. I followed the following steps:

1. I opened the .pdb file in blender.
2. I exported it as a mesh in the .obj format.
3. In fusion 360, I clicked on Insert .obj. Unfortunately, I soon realized that the imported .obj file was not modifiable. Fusion 360 reads meshes created in a different software as a compact single element.
4. I then imported this Fusion File into Splicer. However the program struggled figuring out which sides to cut and in which direction.

That's when I realised that the diamond molecule is not the best to be laser cut. Thankfully, there are many different carbon allotropes that I can choose for them to be modelled.I therefore decided to try the crystal structure on the vinyl cutter and go for a graphite model in the laser cutter. Below are my brainstorming sketches for different types of joints:

Find below a diagram of the needed measurements. Source: 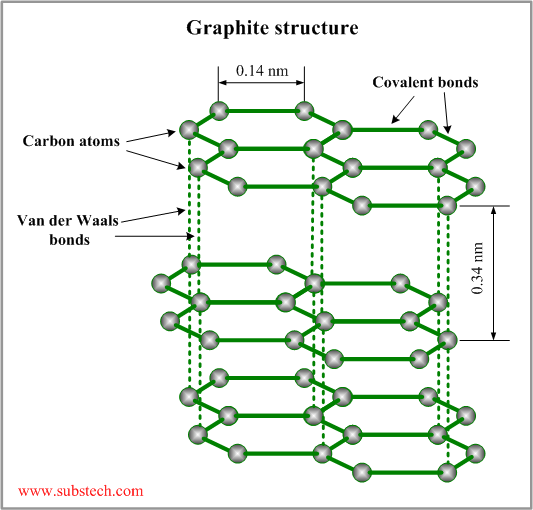 I couldn't find online a version of the graphite model in the Protein Data Base. Therefore, I built my own model from scratch based on the graphene tutorial below:

I started by making one single layer of graphene as you can see below:

I, unfortunately, had the same issues I had with the diamond structure while trying to use Splicer. That's when I decided that working with one single layer of graphene would be the easiest. I tried using Rhino to see if it had a more efficient option of translating a 3D model into 2D. I exported the file as an .svg to have it imported into Illustrator. Unfortunately the version exported by rhino had thousands of tiny paths that had to be joined. You can see that below.

I had to then redraw the pieces by hand in Illustrator and then import them into Fusion 360 to get the full parametric capabilities. Instead of using a 0.1 mm kerf, I used a 0.075 mm one to ensure that my press-fit kit held together. For that I used the modify parameters dialogue Fusion 360. However I later realized that I had made the wrong calculations since for the new material thickness value I had typed in 3.85 mm instead of 3.80.

This could also have helped me avoid the typo mentioned above. For more information on parametric design, please refer to my findings in Week 3.

Then, I followed the following steps:

I opened the svg in rhino.
Then I went to file -> print and there I selected the window size.

Click the JC button in the lower right. This opens the proprietary laser cutting software by Trotec, called JobControl. Drag the file into the main canvas.
Go to the material settings menu and there I set the standard cardboard settings.
Then I hit print.

The first time using the laser cutter was a bit confusing.

Learning how to place the focusing tool properly took a bit of practice. I realized later that cardboard has to be taped to the laser cutter's base to make sure that a possible curvature of the material does not alter the diameter of the laser. In my case, even if the ray was in focus, it didn't not cut the material homogenously. This meant that the laser's trace was thicker in some parts that in others. This can be avoided by securing the materials

In the end, I did not get a chance to place the vertical sticks and the bonds to complete the graphite model. But I did however, joint the atoms in such a way that they form a sculptural cloud.

For this I used the amorphous atom svg and the graphite drawing I had prepared in Week 2.

This machine was one of my favorite ones to use since in my opinion it is one of the most intuitive. It was one of the key tools used in my final project. In the Fab Lab BCN, we use the model Roland GS-24. For this we import the .svg file into Inkscape:

Then copy paste it into Roland's proprietary software called CutStudio.

The first time I launched the vynil cutter, I noticed my curvy cuts were not smooth. In fact, the blade was creating ripples. I think that must have been a resolution discrepancy between Inkscape and CutStudio. I fixed it by first enlarging the svg file in Inkscape and copying and pasting that version into CutStudio. Once the enlarged image was in there, I modified the size back to it's original one.

Sometimes I would forget pulling down the lever that secures the blade to the vinyl and the material would slip out when the machine started printing.

I cut the amorphous atom drawing on adhesive vinyl used for soft robotics since it was the material we were given in our lab. (At this stage of the course, I was not fully aware of its potential, but for more experimentation with inflatables please go to Week 16: Wildcard Week). Because of the way in which the file was placed on the canvas in CutStudio, the blade missed two of the outer strokes.

Once I had finished cutting that same file, I realized that my cut would only work to be used as a sticker. I had originally planned to use this design as a stencil for printmaking. But for that I should have cut a negative copy of the design!