This week my focus will be on understanding how to program my board and on my first output spiral for my final project.

My preference is the first option, I think this will give the most beautiful result. However I think it’s also the most difficult option. Therefore I wanted to start with created my own small RGB LED-matrix.

This week I went to the exhibition Here’s to the Future at the STRP-festival in Eindhovenand to Design Nonfiction: Transformations in design practice between the Dotcom Crash and the rise of machine intelligence at MU exhibition center to get more inspiration on output. 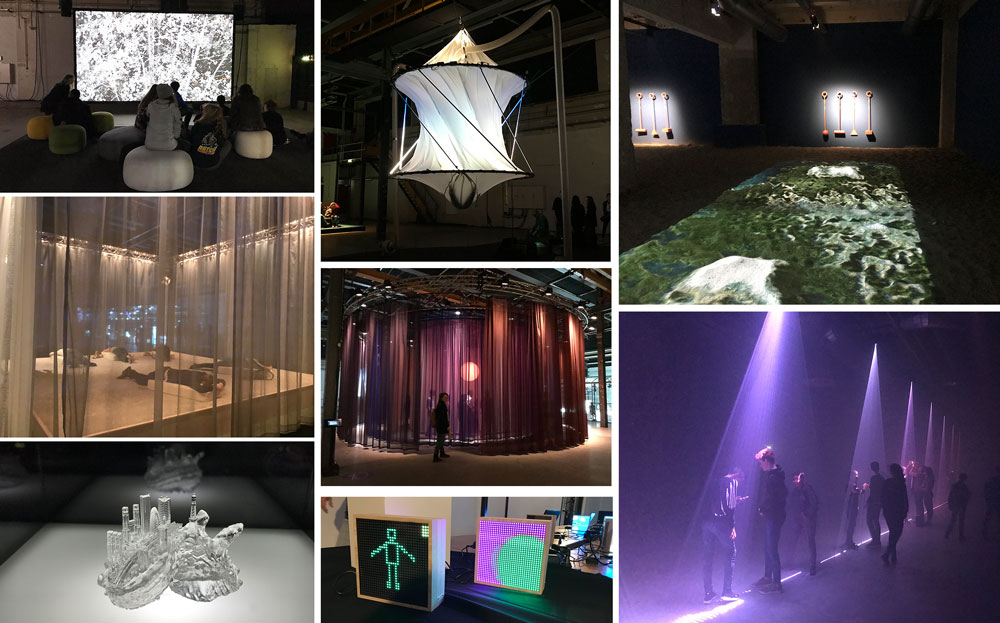 Exhibition at STRP Festival 2019 and MU

In addition I did a lot research this week into several subject matters as I really wanted to get a better understanding of the difference between Multiplexing and Charlieplexing and how Shape Memory Alloy (SMA) works. In the end I also had to researched a lot on bitwise operations, how interrupts and timers work, and how to use the datasheets to find out which registers to use.

Links related to Multiplexing and Charlieplexing

Links to the datasheets and footprints

What we did – Group assignment step-by-step

This weeks group assignment is to measure the power consumption of an output device. For this week we didn’t use the power supply from week 5 but a small cheaper version in combination with a big power bench. You can use this as well to test the voltage the circuit is using. 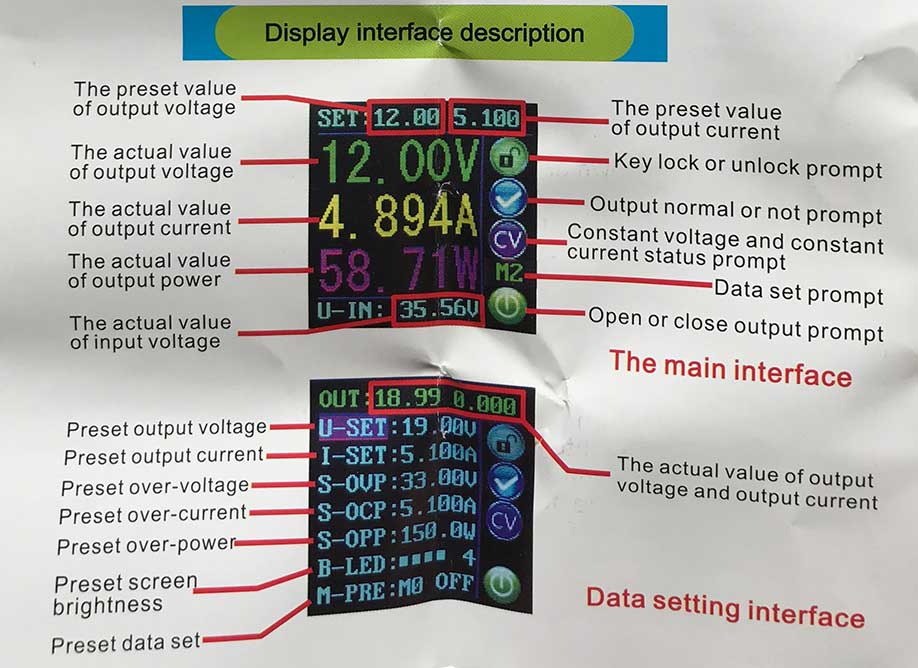 Interface for the power supply

We used Henk’s final project of last year to measure the output. As you can see in the image below it tells you the voltage, current and power the circuit uses. 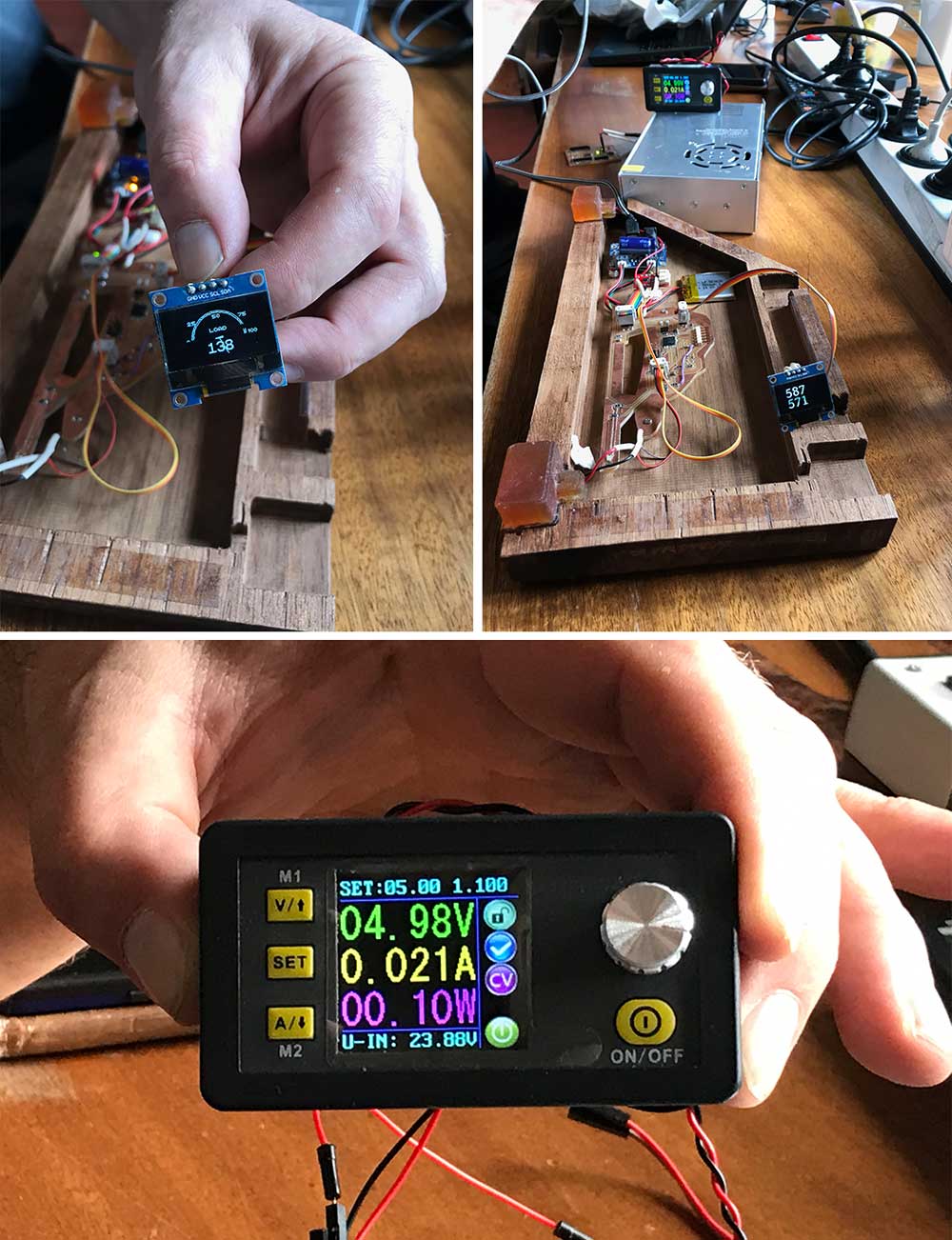 What I did – step-by-step

This week my goal was get a better understanding of the programming part and to create a RGB-LEd matrix. My first steps this week were to reproduce the the example by Johnson Davies with the Arduino so I would be able to test out the programming and change the flow of LEDsmyself before I would mill and solder my own board.

Step 1: Design my board in Kicad

This week I started with designing my board. I wanted to make an RGB matrix because I will use this for my final project. That way this week would be a nice first small spiral. Because I’m new to electronics and programming and looked into some examples. However there weren’t many about RGB-matrix, most of them were about LED-cubes or they used a prefab RGB matrix. I found a nice project by Johnson Davies on technoblogy. So I used his schematics and matrix as basic start and added the capacitor, an 10k resistor, a power converter and the headers myself.

Matrix RGB-LED related to the pins of ATtiny85

Schematics of my board 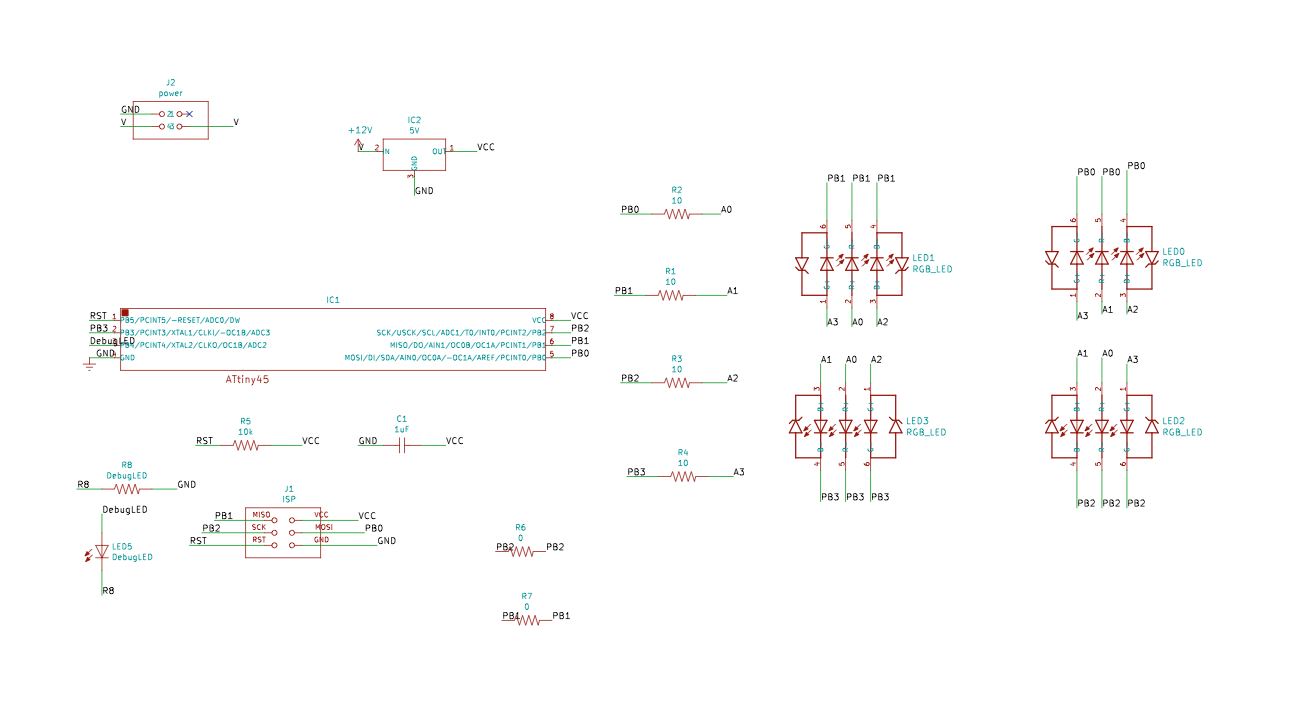 Schematics of my RGB-LED board

Routing of my board 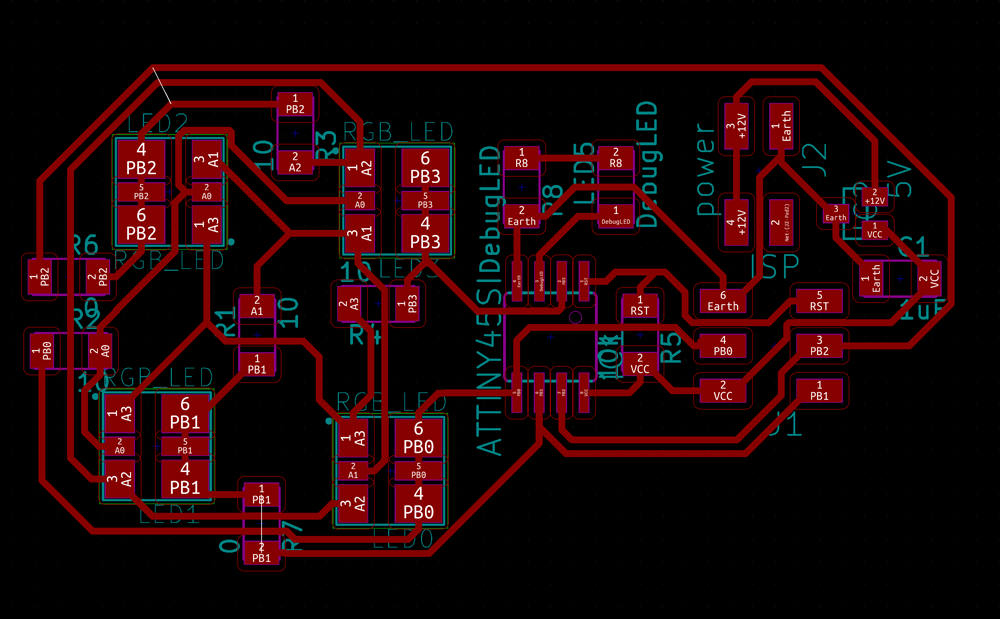 Routing and design of my RGB-LED board

The routing of a board is really addictive to me, I again set the goal to use as little zero Ohms as possible. However I needed 2 in the end which is logical as I’m using Charlieplexing. For the outline I created an leaf-shape in illustrator.

Step 2: Reproduce the board with a breadboard and Arduino

Before I would mill this board (I reserved the machine on Monday afternoon) I wanted to test out how the schematics would work and I wanted to figure out how I could change the given code. 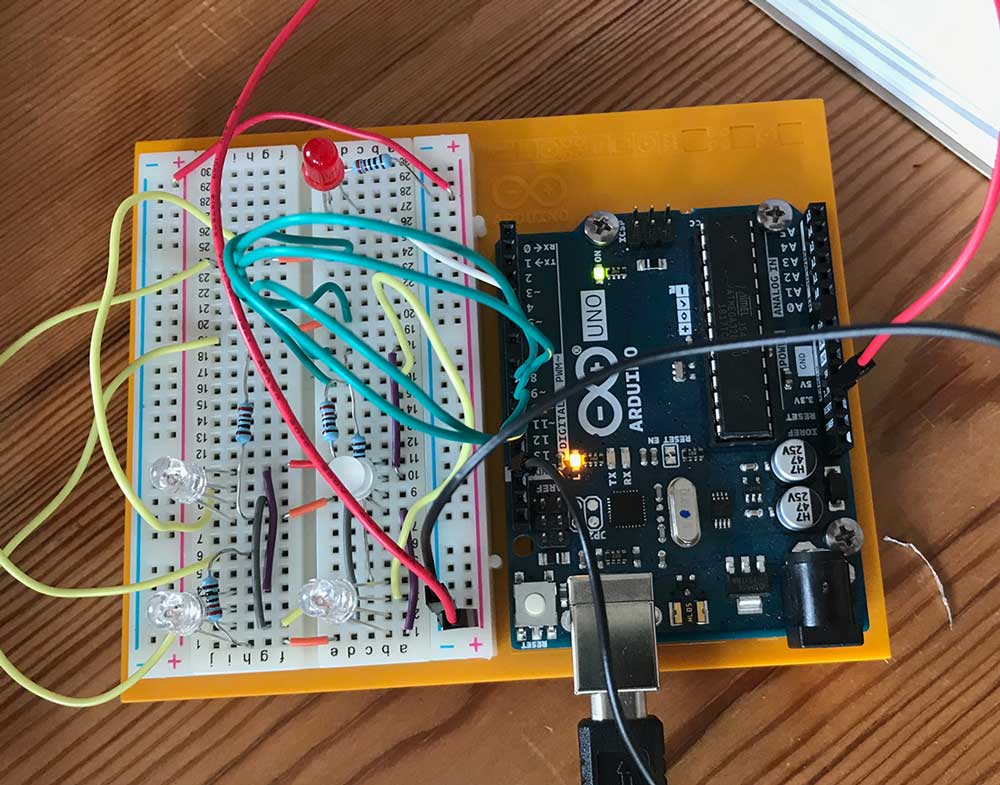 Arduino prototype of my RGB-LED board

Step 3: Rewrite the code for Arduino

Reproducing the schematics on a breadboard was the easy part. When I wanted to compile the the code by Johnson Davies and use it for my prototype the Arduino IDE said that it wasn’t able to compile for the Arduino Uno. So I took the following steps.

In the end it was a lot more difficult to find the right way to change the registers. As I quickly found the right registers however it still wouldn’t work. I asked my boyfriend Klaas-jan to help me. And we looked at it and researched a lot. In the end we had to set everything to zero for the Arduino and we made a small typo. But we managed in the end to get to work on the Arduino.

Step 4: Milling and soldering my board

With the Milling I had some trouble with the outline traces. First because I had to refresh mods. I realize it but it cutted the outline in one go breaking the mill. So I had to restart Mods, change the mill, and make sure it cut through in four steps. I made a leaf shape and the petiole was too thin to mill so I lost it. 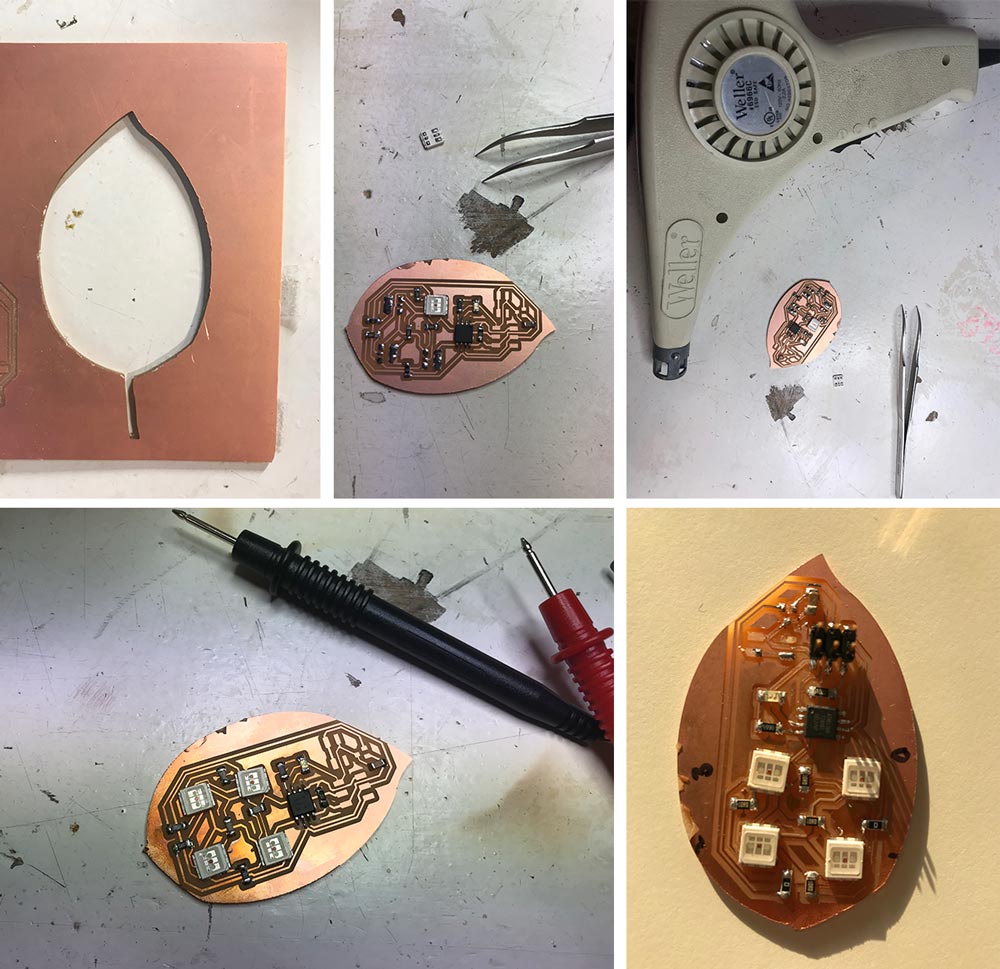 Soldering my board with a heat gun

The soldering went fine till I realized that the RGB-lEDs can only be soldered using a heat gun or over. It was the first time for me to solder this way. The steps I took:

Step 5: Debugging my board

When I wanted to program my board, I first checked with the avrdude command if it could recognize it. It did but while I was doing this I smelled something familiar which reminded me of the heat gun. It turned out my board was heating up, so I removed it from the USB-hub. Before I could program it, I realized that I had to debug what was wrong. 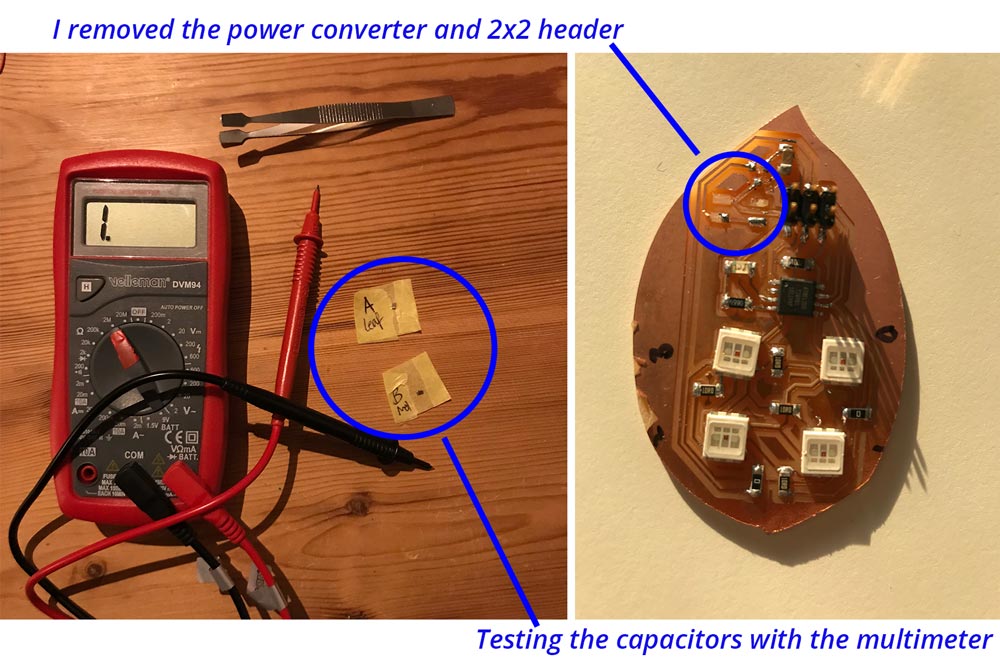 Debugging my board: comparing the capacitors and removing the power regulator

Step 6: Programming my board.

After I troubleshooted my board I could program it. I first bootloaded my board. Johnson Davies uses a board manager for the ATtinys. I researched it and this version by Drazzy gives more options to set the clock speed. 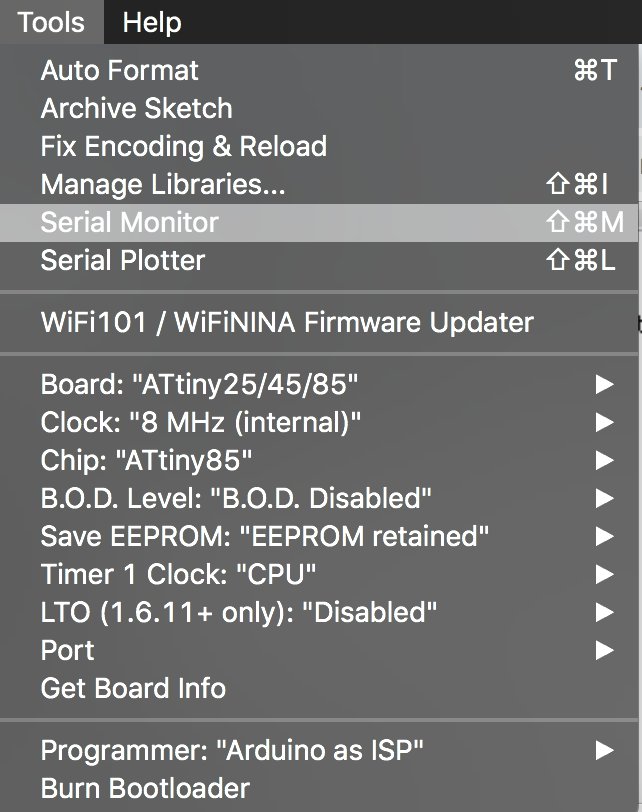 After I burned the bootloader I uploaded the rewritten program by Klaas-jan, I couldn’t stop him as he found it too much fun and interesting to rewrite it in such a way I could understand it, and the program worked straight away as you can see in the video below.

My own RGB Led matrix board working

What I did wrong – and how I solved it

The main problems of this week were related to me not knowing enough to realize how difficult things are.

Our Fablab didn’t have any shape memory alloy in stock therefore I ordered it myself. However I couldn’t find Flexinol in the Netherlands therefore I ordered Nitrinol. As I thought it was a brand difference. But when I did the experiments from my research linked above nothing worked the way it was described. I could shape the material with heating it, however I wasn’t able to reshape it and let it move back to it’s remembered shape. Till I realized I had a different material. I order the real deal from Robotshop, so next week I can do my experiments.

There’s a difference is settings for the ATtiny85 and Arduino

Before I started this week I didn’t realize there’s a difference in registers for the ATtiny85 and the Arduino Uno. I saw the example by Johnson Davies and thought it would not be a big hassle to prototype it with the Arduino because they’re both from the AT-family. This turned out not to be the case. The good thing is that in the end I learned a lot about how to use the registers in the datasheet.

My board was heating up.

As mentioned above, when I plugged in my board to program it the board heated up. In step 5, I describe step-by-step how I solved this problem. In the end it turned out to be the power regulator.

This week I learned a lot mainly from my own mistakes and Klaas-jan gave me a lesson in bitwise operations.

How to prototype with a breadboard and Arduino

My idea for this week was to make a quick prototype with Arduino and a breadboard so I could play around with the code. This turned out to be much more difficult than I thought. Before I could play around I had to research a lot about how to change the registers. In the end I could get it working and the good thing is that it’s all set up now so I can prototype in the coming weeks with adding LEDs to the circuit.

How to use Charlieplexing and Multiplexing.

Before I could design my board I first had to get a better understanding of the difference between multiplexing and Charlieplexing for this weeks assignment. My goal was to Charlieplex a RGB-LED matrix, but some said that it would be too complex. While I thought it would be the same as three separate LEDs so that in the end that wouldn’t be a big difference.

Matrix RGB-LED related to the pins of ATtiny85

This Poster explaining the difference between Multiplexing vs Charlieplexing. 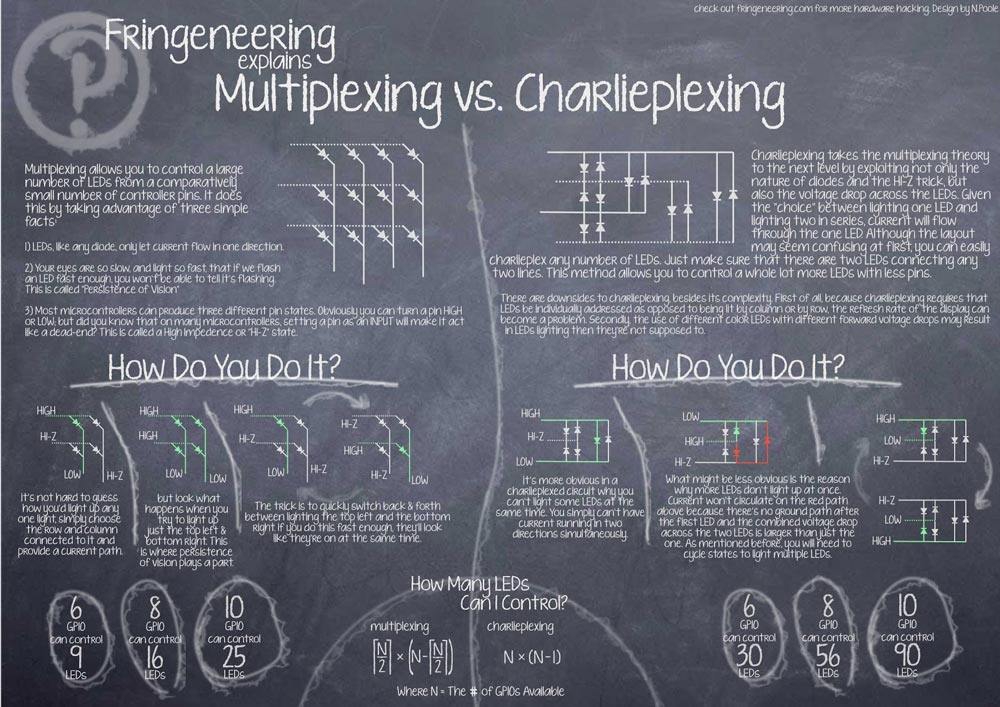 Charlieplexing does make the programming more difficult with the RGB-LEDs. I still didn’t totally get how Johnson Davies wired up his matrix in the code. My goal for next week is to fine tune the code and make changes in the order it flows through the LEDs.

How to debug my board.

This week I learned again more about how to debug the electronics. Most important is to be able to compare different parts and to double check it with different boards and similar components. What I learned most is to make sure that before you start to know why you put something on the board.

How to use bitwise operations

The example code I used this week for my RGB-LED matrix made use of bitwise operations. As I’m very new to programming I had to get a better understanding of it. Klaas-jan explained me how it works and how you can calculate the bit changes yourself with pen and paper. What it does is that it changes the bits linked to the brightness and position of the LED. 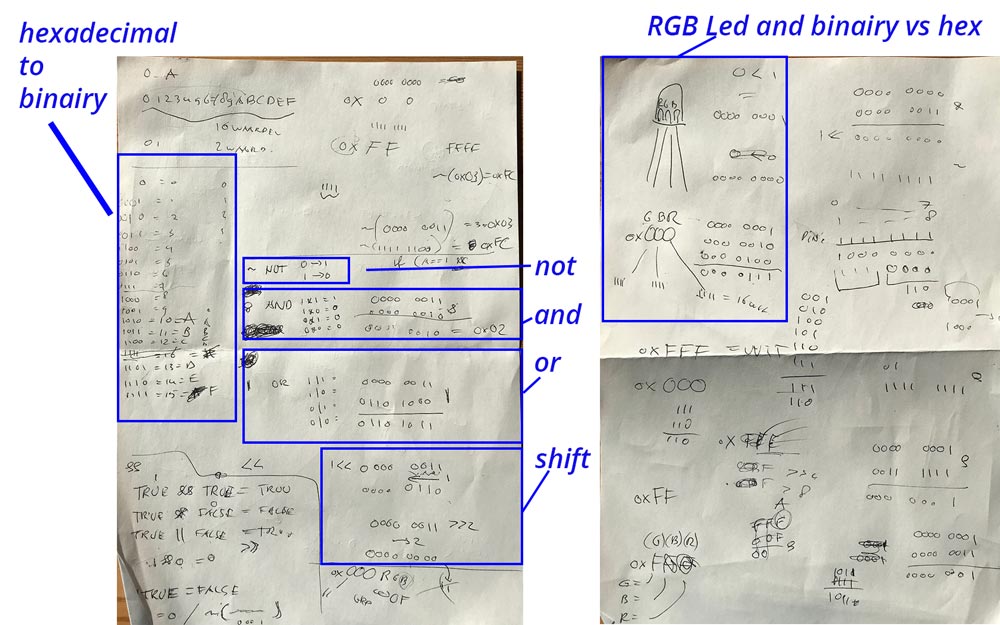 The code by Johnson Davies uses hexadecimals in stead of binary. So first I had to figure out how this works. And how they are related. The hex-codes reminded me of illustrator and using color. It’s fun transfer these to binary and to calculate the bits with NOT, AND, OR, SHIFT. These are in a way very small functions as you can see they change the bits.

Why use bitwise operations?

It seems more difficult to use bitwise operations to program my board. But since programming is all knew to me, I wanted to see if I could get a hang of it. The reason why it is good to understand bitwise operations is that it uses less memory on the chip and it’s quicker than logical programming this makes the program a lot faster. Which is again useful when using Charlieplexing because the idea of Charlieplexing is that is flickers so fast your eye can’t see it. The faster it the chip can process the code the nicer the end result will look. I can use this for my project because my end goal is to have a bigger RGB-LED matrix.

What made me proud!

Klaas-jan helped me this week with rewriting the code by Johnson Davies and he helped me understanding how the code works.