For my final project I would like to make a interactive tree that re-creates the feeling of lying under a tree looking trough the foliage at the sky and stars while you’re in your own city home. This page describes the components, how to make each part, what I would like to change and the bill of material. The full development of the final project and the weekly process can be found in the documentation of week 20: project development 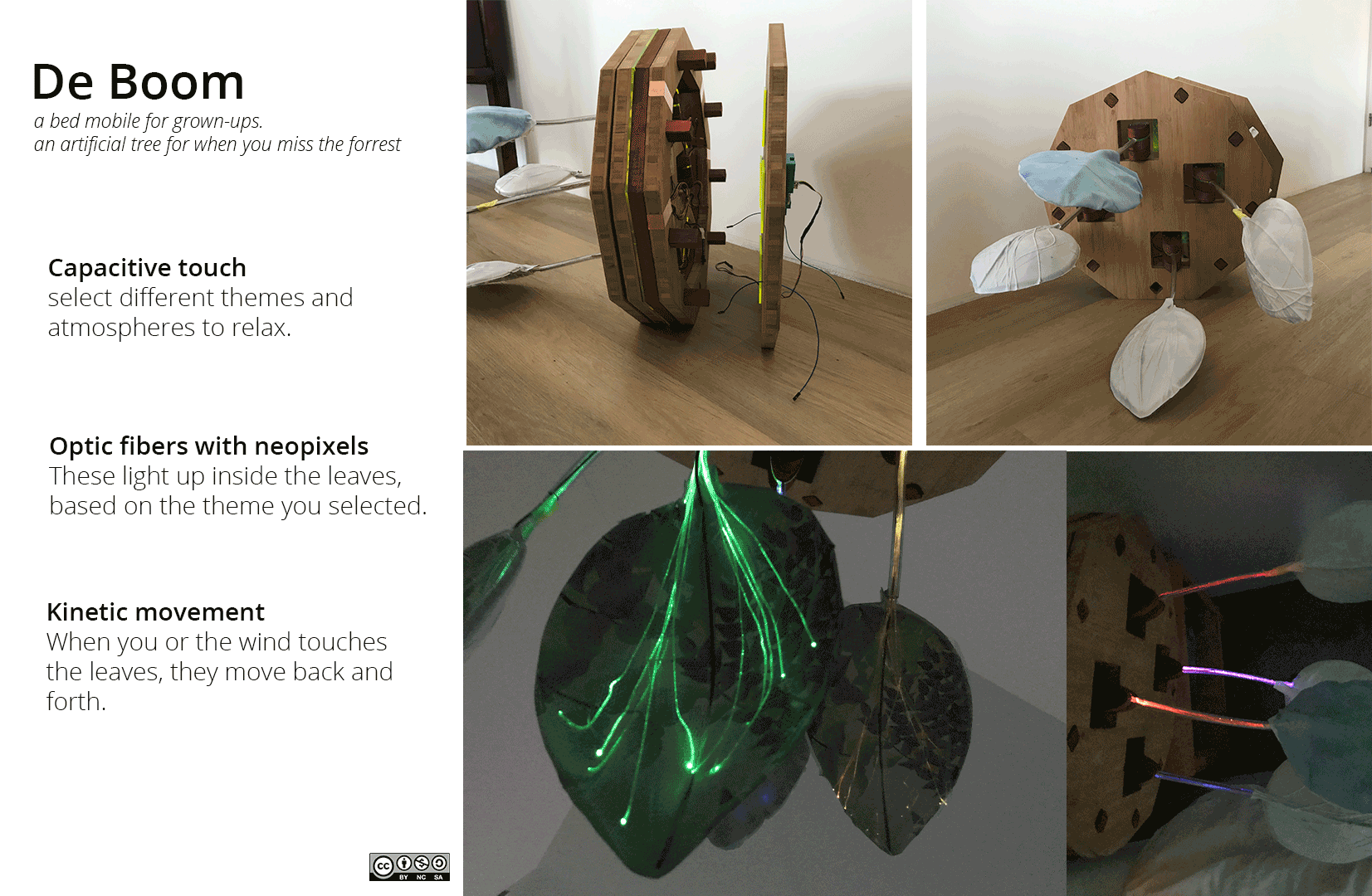 Overview of all the materials used and their costs plus supplier. The original excel can be found here 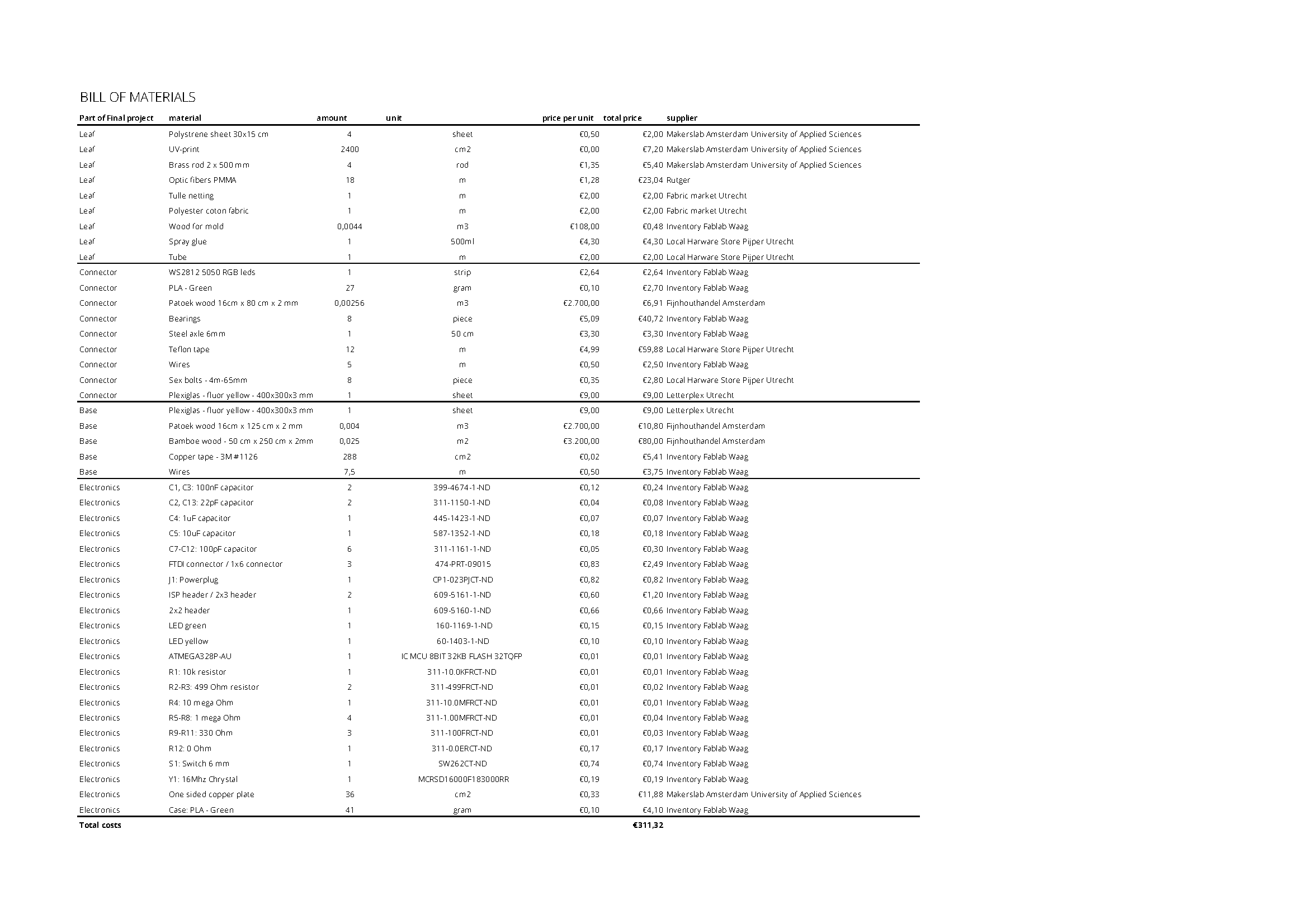 All the parts of my final project 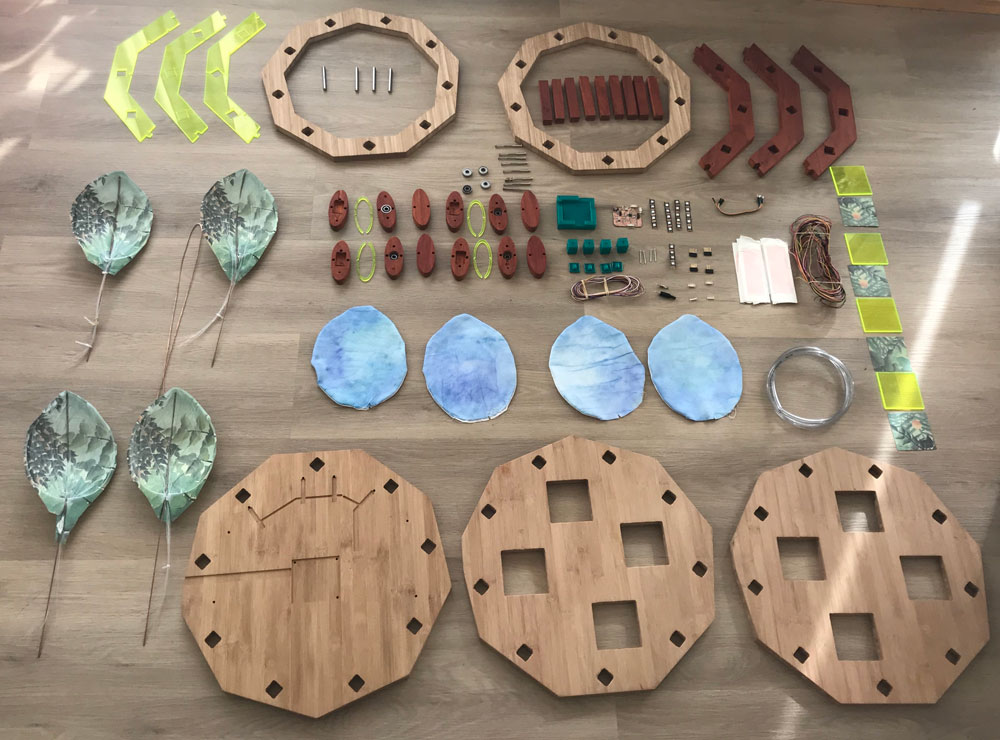 Overview of the parts of my final project

How to make the Leaves

During the Fab Academy did a lot of prototyping to get the right sort of leaf. In the end I came up with the following development process.

My first step was to design a 3d mold for my leaf so I could use it in the vacuum former. 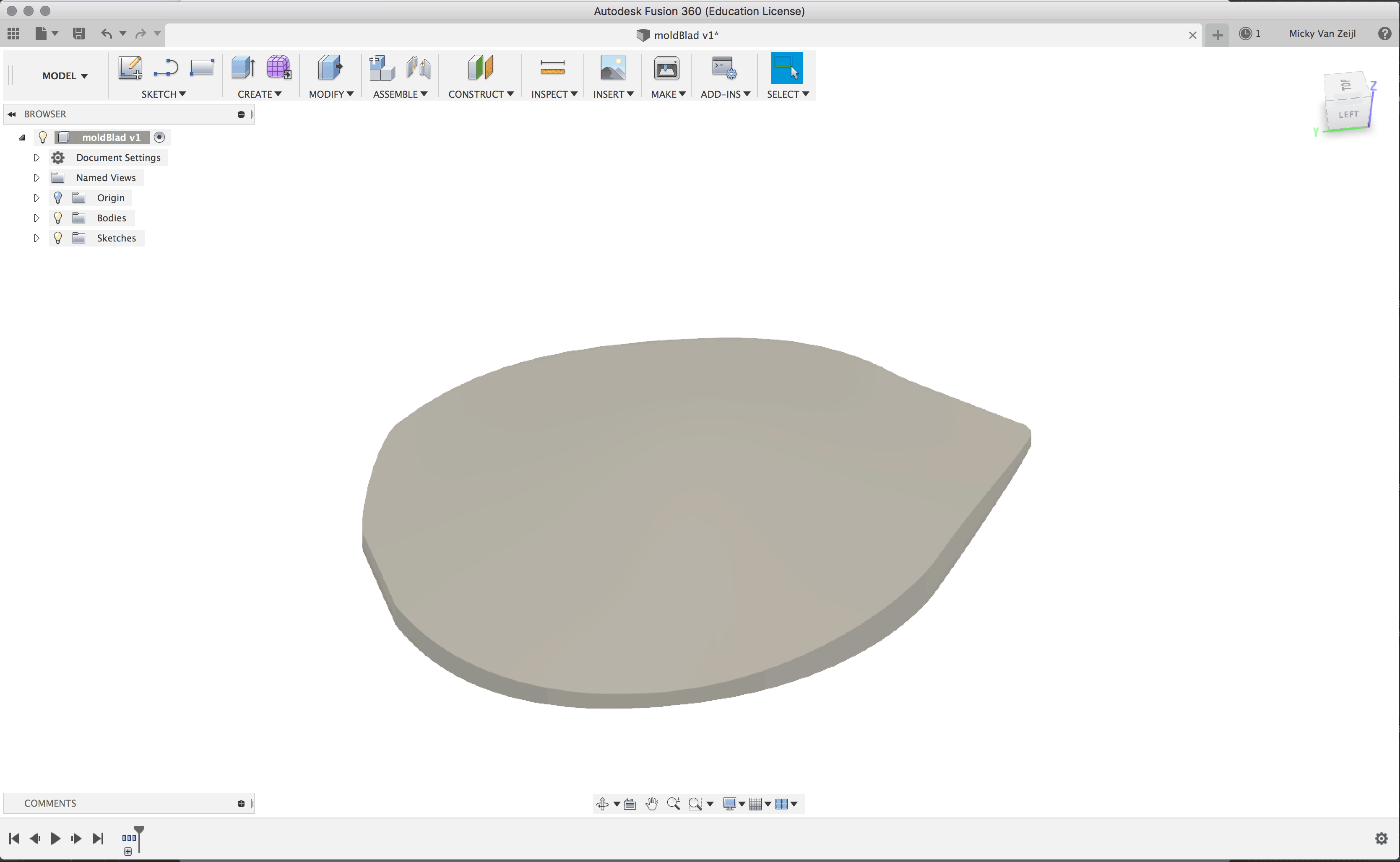 After the 3D design I could create the mold. You can use the STL file and CNC foam. However I sliced it and laser cut the mold, due to opening times of the lab. 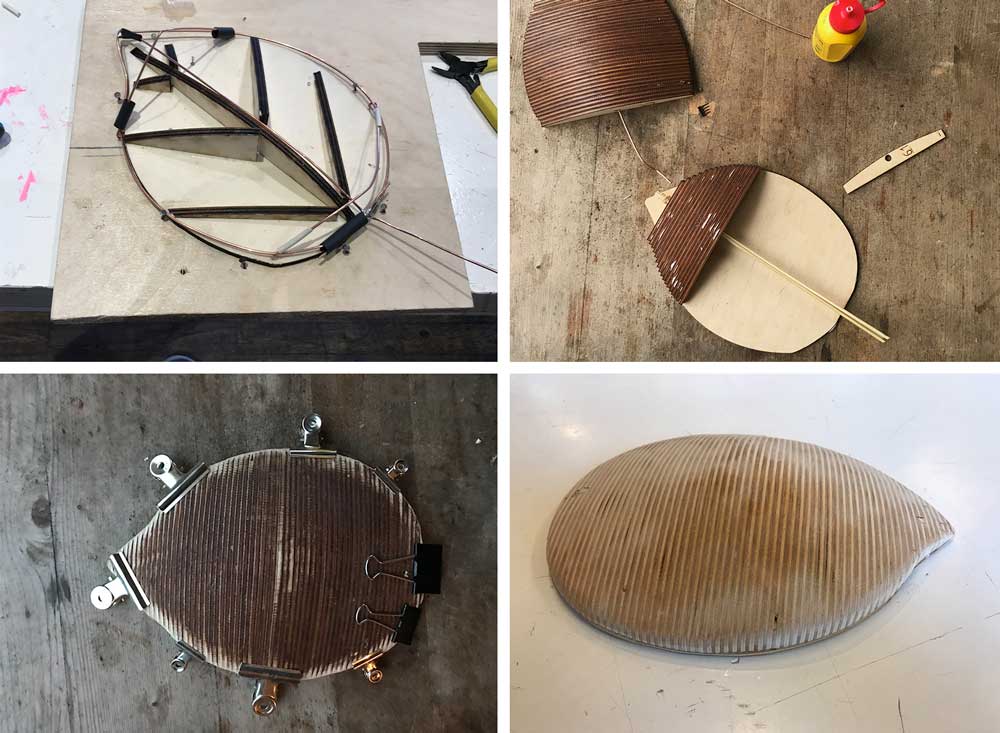 Making the mold for the leaf

Step 3: Make the leaves from fabric.

Next step was to make the leaves. I use polyester for the outside and tulle for the inside. 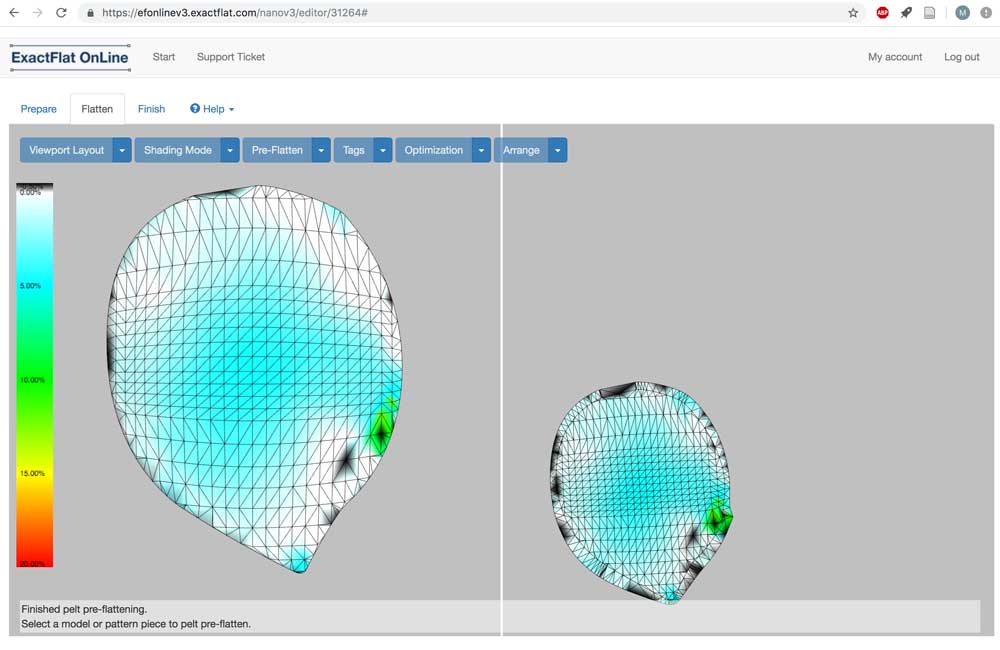 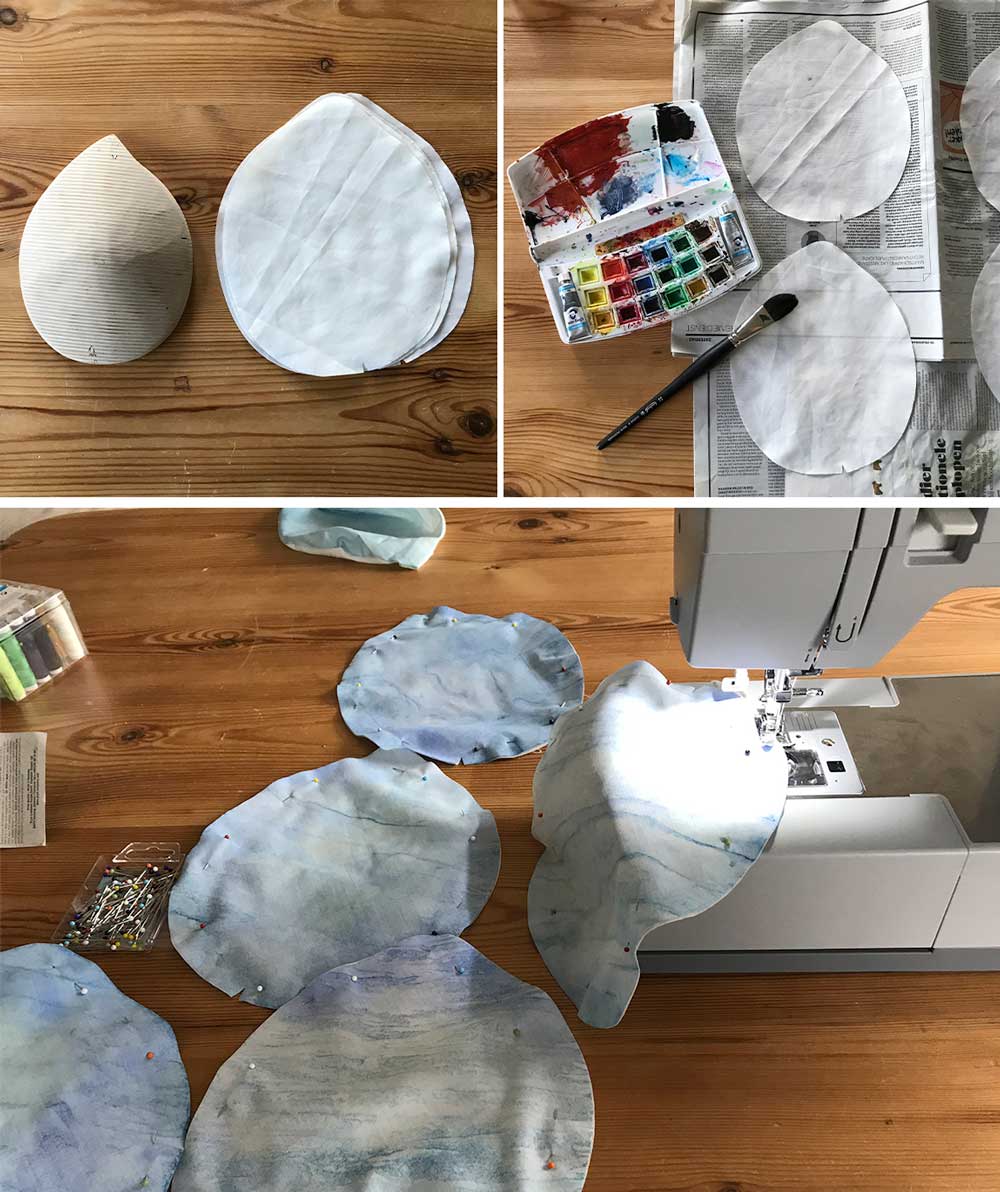 To create the feeling of foliage, I used the UV-printer. 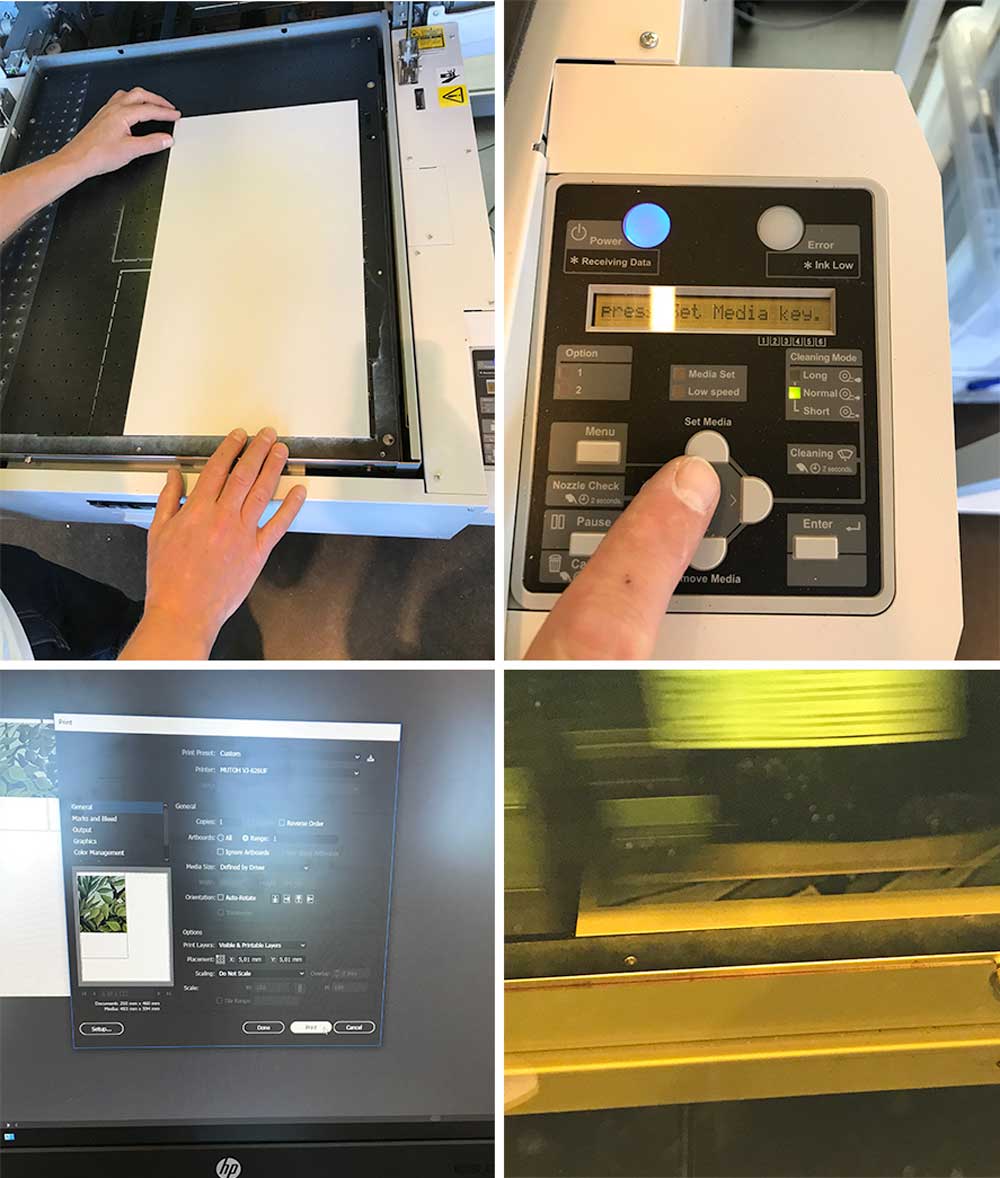 UV-printing of polystyrene for leaf

Now we have all the parts together and it’s time to assemble the basics. 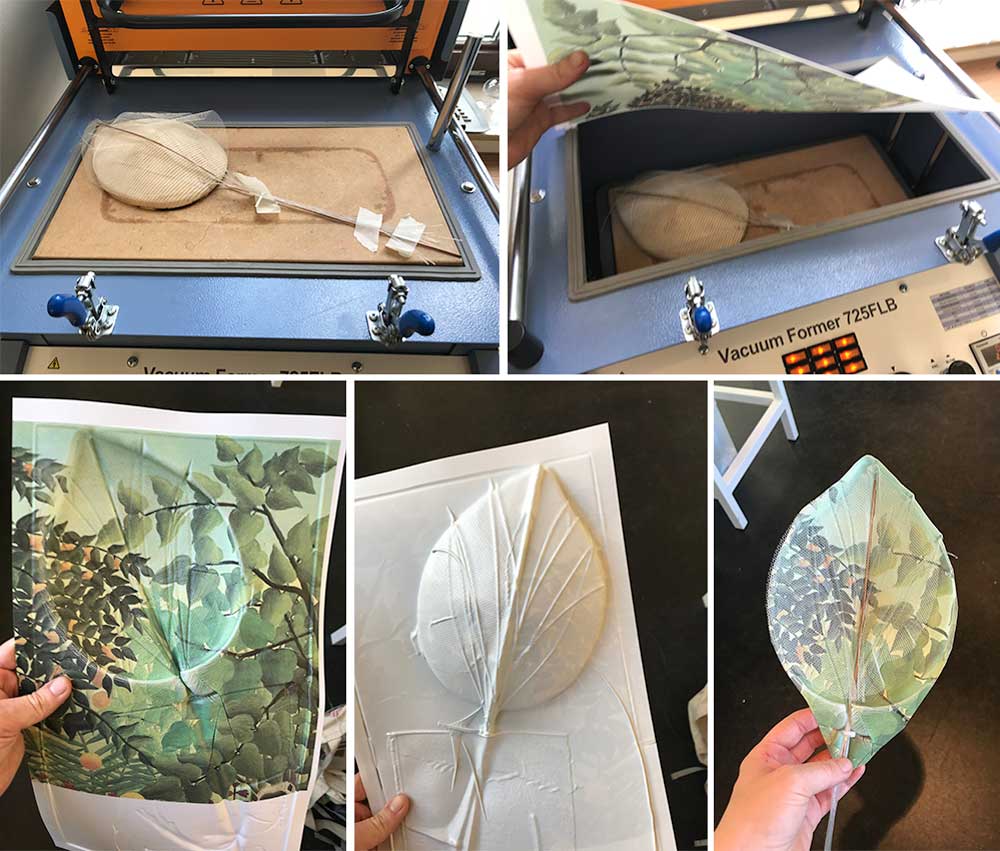 How to make the connectors

It took me a while to figure out how I would design the connectors between the leaves and the base, because I had several parts to keep in mind:

First I designed a connector for the optic fibers as it’s very subtle how these are connected to get the right effects. 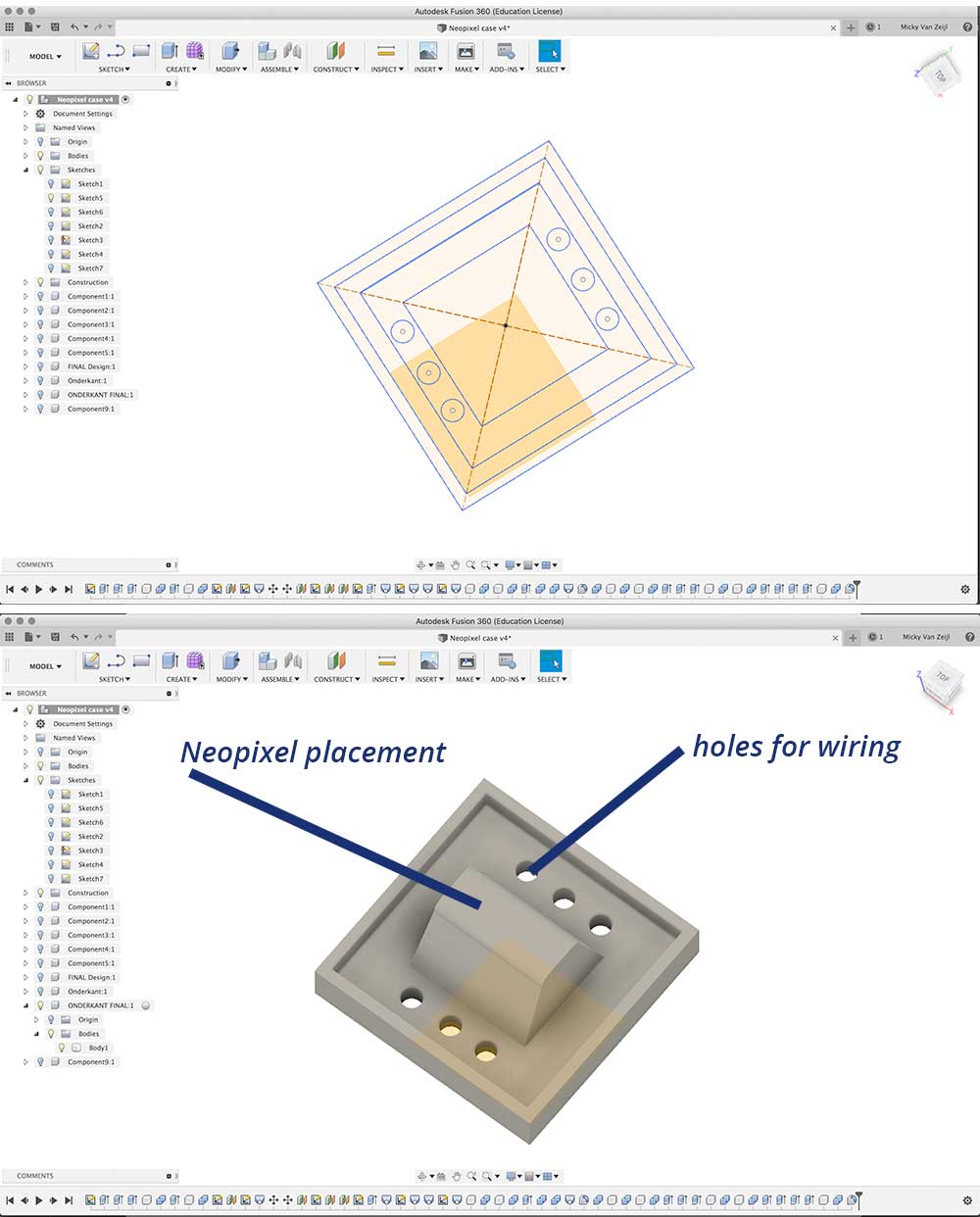 Step 2: Design of the connector hub

To make sure the Neopixel connector above stays put and the leaf stays hanging I created a connector hub. That connects these parts to the base. I wanted them to move and keep moving like a pendulum. I did a lot of tests with springs. In the end I decided that I will leave this part for future development. As it takes a lot more testing to fine tune. For now the movement is created with the bearings in steel rod. 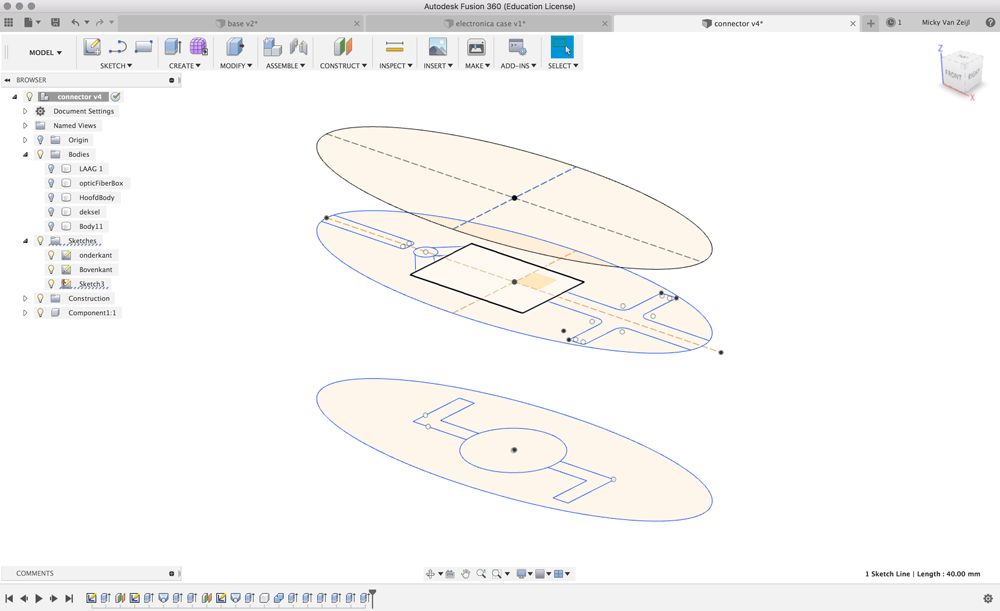 Combining the leaf with the connector

I connected all four leaves to the connector with the Neopixel connection block inside it. These parts can be assembled with the Base. 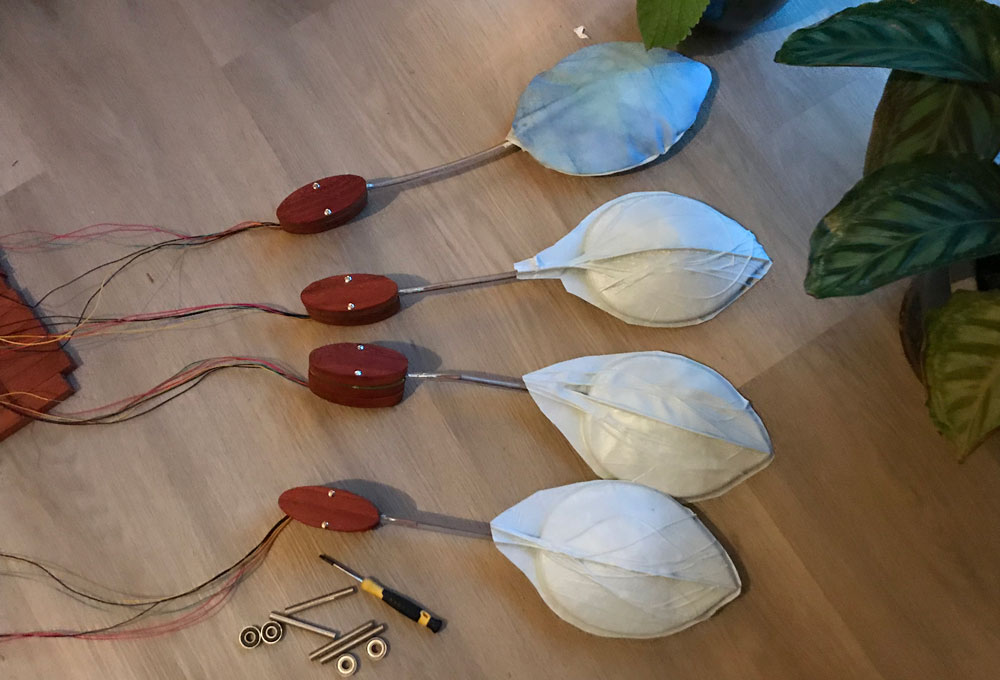 How to make the base

For the base I used bamboe and patoek wood combined with neon plexiglas. I sliced the 3D design in layers of these materials and placed them on top of each other. Where they will be held with the wooden side parts. I designed it in Fushion 360. 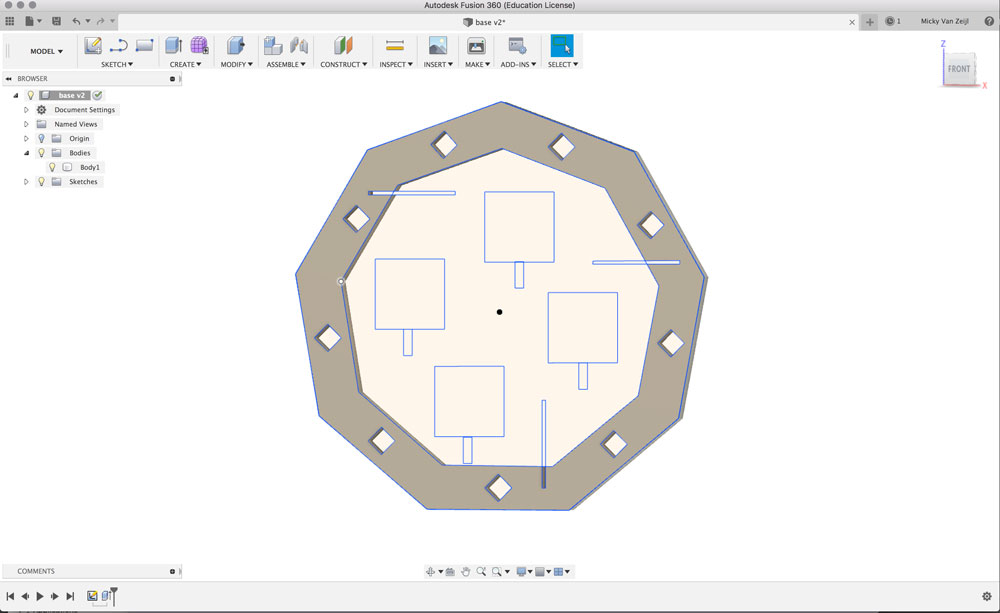 Import requirements for the base were:

Combining the leaf with the connector

How to make the electronics

More details on the electronic design can be found in my documentation of week 20. I made Satsha kit with two extra elements included in the design and I left a lot of pins open for future projects. Or for debugging when needed. 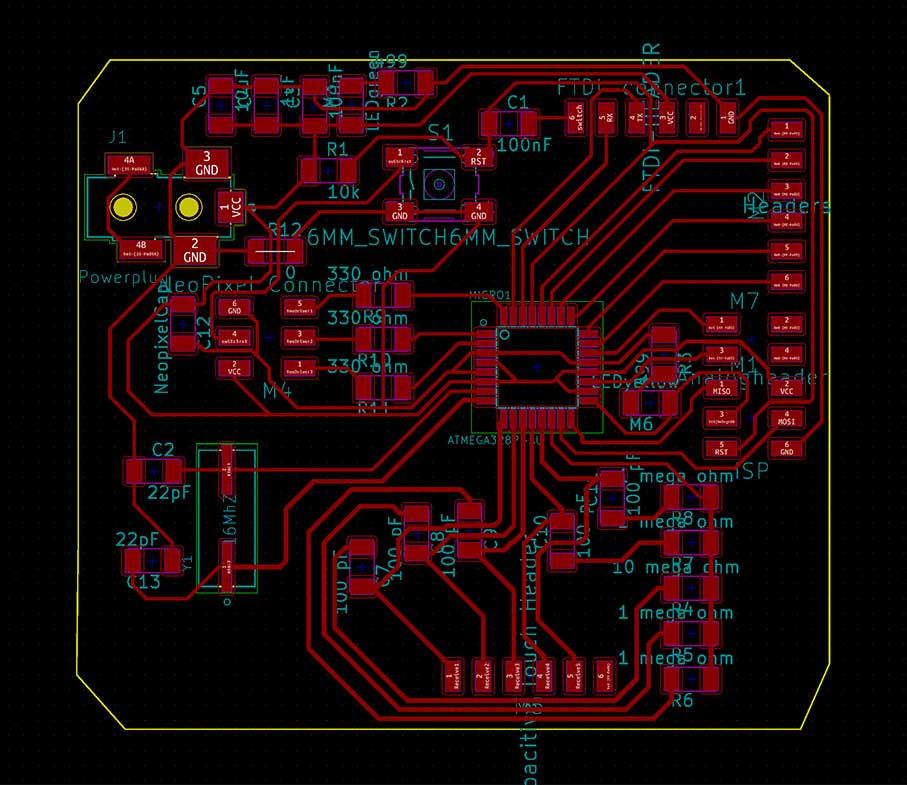 Final design of my Tree Satsha Neopixel touch board

In the design of the base, I also made sure there was enough space for wiring. 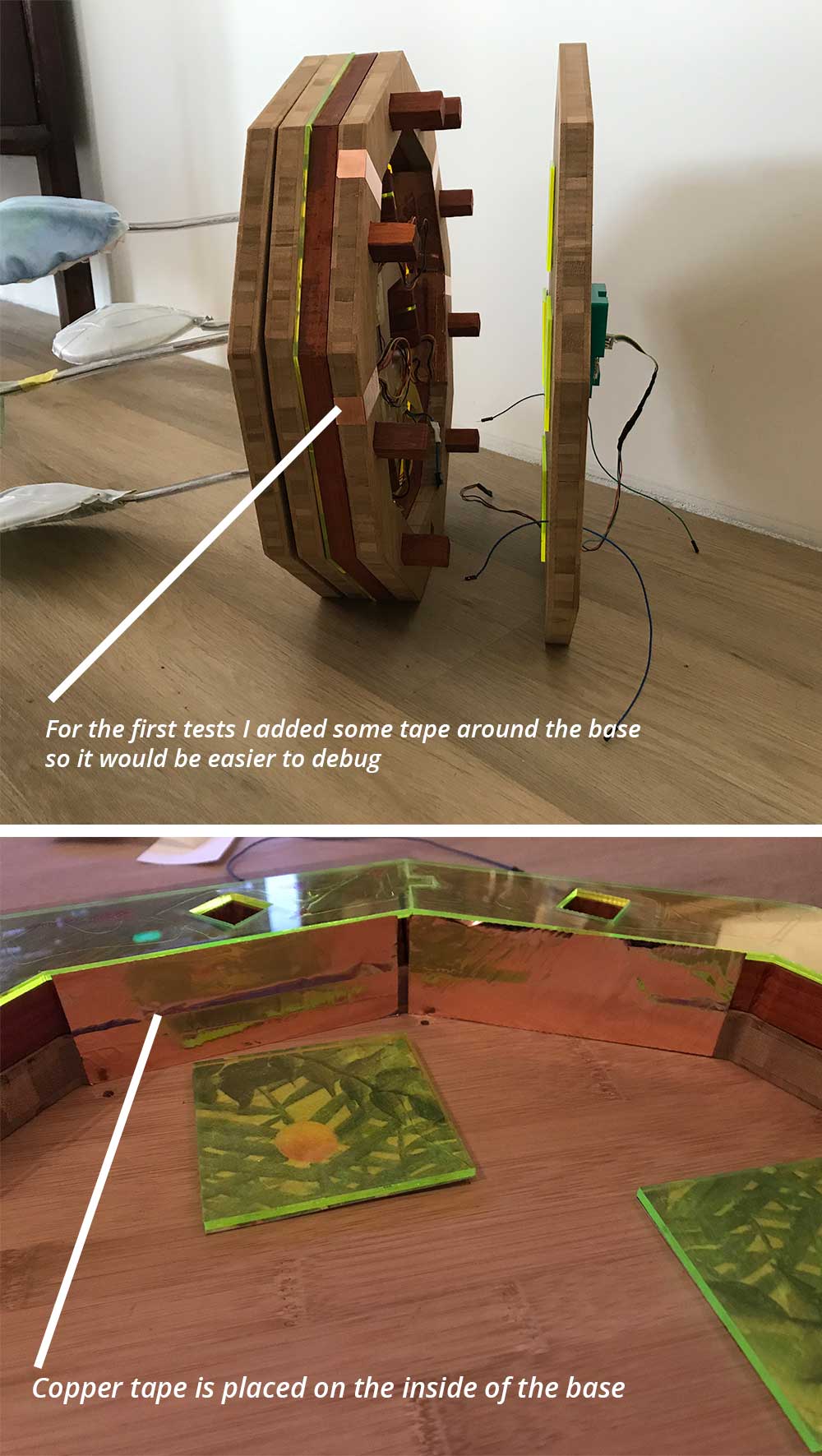 The capacitive touchpads are placed inside the frame. So you will have to touch the wood on the side to put the Neopixel on and off or to change color theme. For this moment I put some tape around the base so it would be a bit easier to debug. In the final result this part will be removed. I used the vinyl cutter to cut the tape.

Before I added this to my final project I tested it, as I write more in detail in week 20, together with the Neopixels to make sure it works.

Making a case for the electronics

To make sure the Tree-Satsha board stays solid and safe, I created a case around it to attach to the back of the base in Fushion 360 and 3D-printed it. 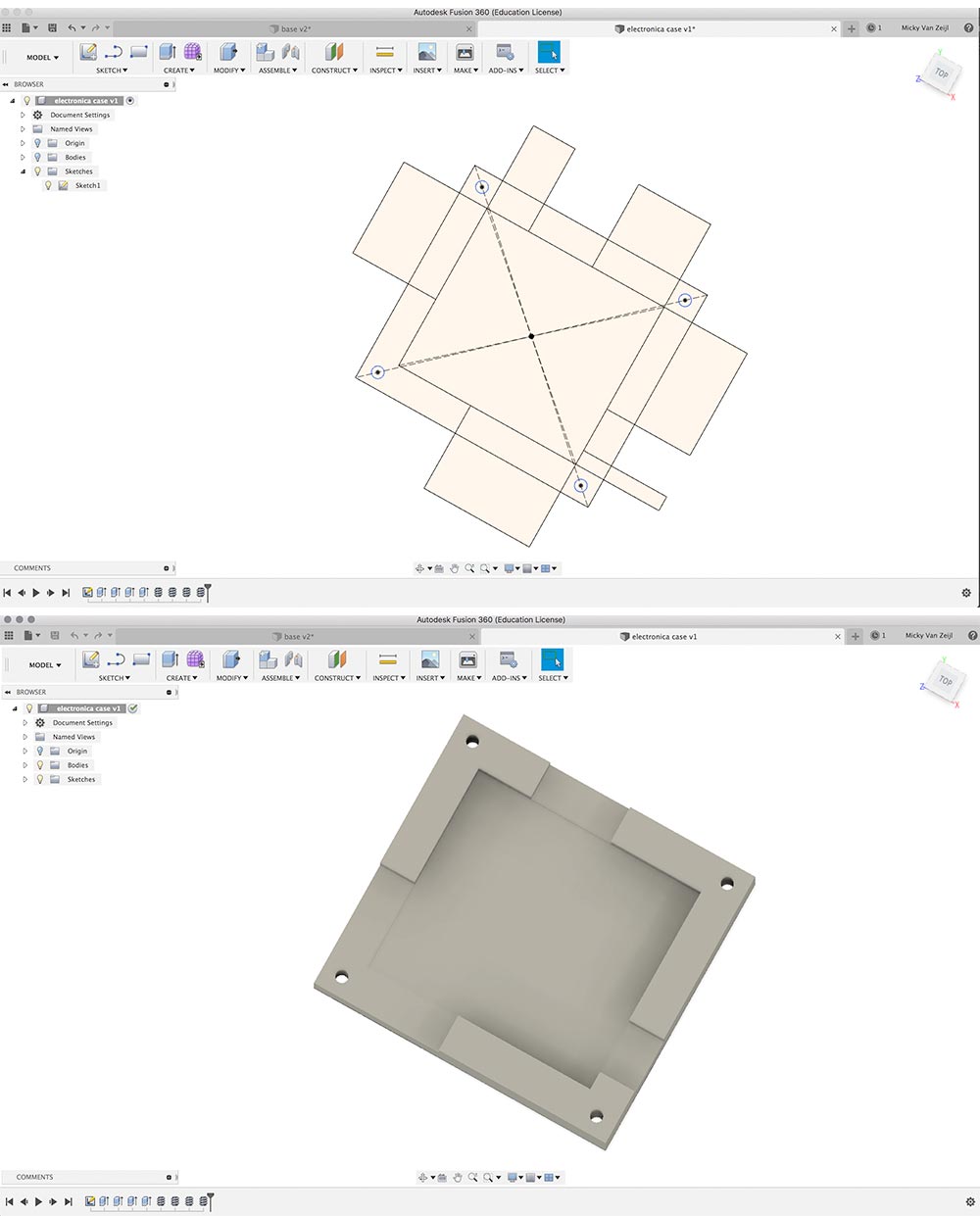 3D design for my Tree-satsha board

As you can see in the video below the tree-satsha board fits nicely within the case. I will mount the case on the back of my base to make sure the board stays safe.

Case for my Tree-Satsha Board

How to make the programming code

I didn’t have the time I wanted and needed for the programming of my code. The design, production and assembly of all the parts took me a lot longer than I had planned. This left me with hardly no time to write a nice program. To make sure I could prove and see that my final project works I wrote an Arduino sketch which combines two example sketches. The capacitive touch and Neopixel strand version. I tweaked these so the Neopixels would respond to the capacitive touch. I also added a more green version of the rainbow function in the strand test, to create a more forest feel to my project. This code can be found in the [documentation of week 20]((http://fabacademy.org/2019/labs/waag/students/mick-vanzeijl/posts/2019/06/05/week20.html)

In the end I did tweak a bit in code after the final presentation as I wanted to show a better proof of concept. It’s still quite simple but at least I have four touch pads working and one of them I can use to switch off the lights. 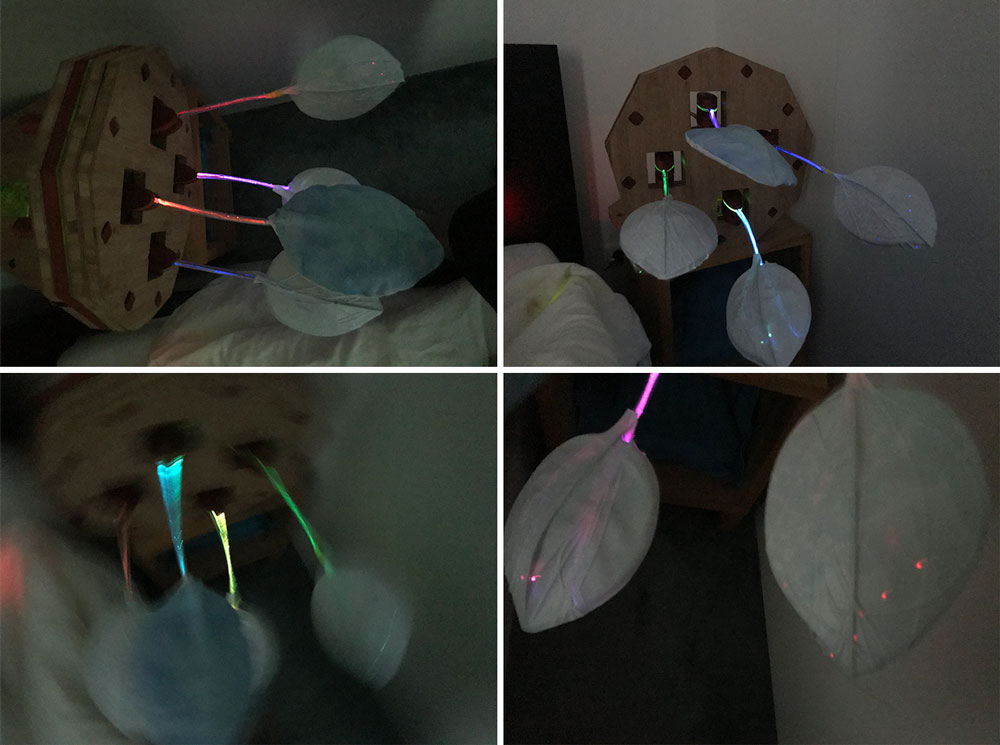 What do I want to add and improve 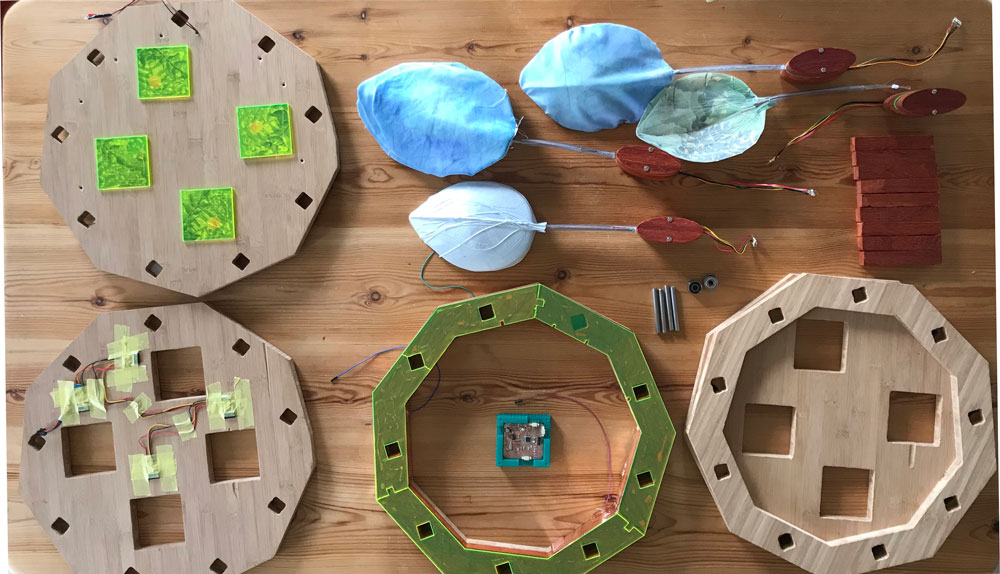 I’m quite happy with the electronics design what I might add in the future is maybe a very silent motor or another system to start the movement of the leaves. If I would make this for production I wouldn’t use the Satsha board because it has a lot more functionality than I need at the moment. So an improvement would be to make the board smaller with only the parts I need: capacitive touch and Neopixel connection.

I didn’t have time for the programming part of my final project. I made a very simple sketch that works with the capacitive touch and the Neopixel. However I wanted to add a lot more functionalities.

What makes me proud

What made most proud with this final project is the 3D-printed connector between the Neopixel and the optical fiber. I had no experience with 3D design before I started the Fab Academy and I’m really proud that I managed to 3D design a functional block that works nicely and precise. It fits 14 optical fibers perfectly with the light beam of the Neopixel. The bottom part clicks nicely to the top. Plus there’s space for the wires on each side of the Neopixel.

The electronic part made me proud as well because I had zero experience with electronics before I started the Fab Academy. I used the basic Satsha kit but added my own parts and I decided to make sure I could always add extra parts by adding headers to empty pins. This part worked straight away with no problem, which still surprises me.

Klaas-jan helped out a lot to finish my final project on time so I really want to thank him for all his time and patience. In addition I want to thank my Fab academy group: Anne, Rutger, Joey and off course instructor Henk. We had a lot of fun together and helped each other through the last weeks to be able to finish on time. I also want to thank Sander, Henk and Cees of the Makerslab at the Amsterdam University of Applied Sciences for their advise as well as my colleagues at the University (especially Maaike en Irma) for their help with my daily work. My parents for their advise about springs, optical fibers, sewing tips and their enthusiasm. My friends for their support, Sandra thanks for the video editing lessons and Annemieke for all the inspiration and advise. It was a fabulous adventure!