This week our main focus is machine design. And we do not have individual assignment, instead we have group assignment - to build a machine.

As mentioned in week 15 Mechanical Design, we had several ideas about making the machine and we locked it down to: make an a spirograph machine! We already made the mechanical design and it worked manually. Now it’s time to think about how to make it work automatically!

We had 3 attemps and then finally came to the solution that works.

We are thinking about making a vertical motor system, with the motor in the middle, and gears of exactly the same size on the bottom and top. The top gear is attached to the motor on the propellers of the motor. When the motor moves, the top gear will move along. And the top gears are connected with the bottom gear via long nails which we designed with Fusion360 and made with 3D printers.

(Sketch of the system)

Setback No.1
Here comes the first obstacle. we carefully calculated the dimension of the motor, pinpoint the holes for the screws to go through (to mount the motor). 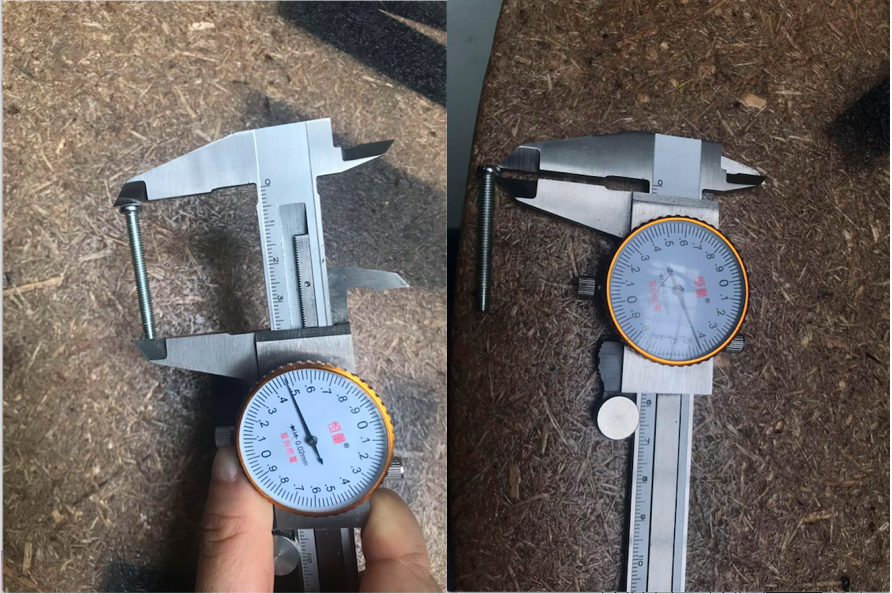 (Measure the bolts for fastening the motor) 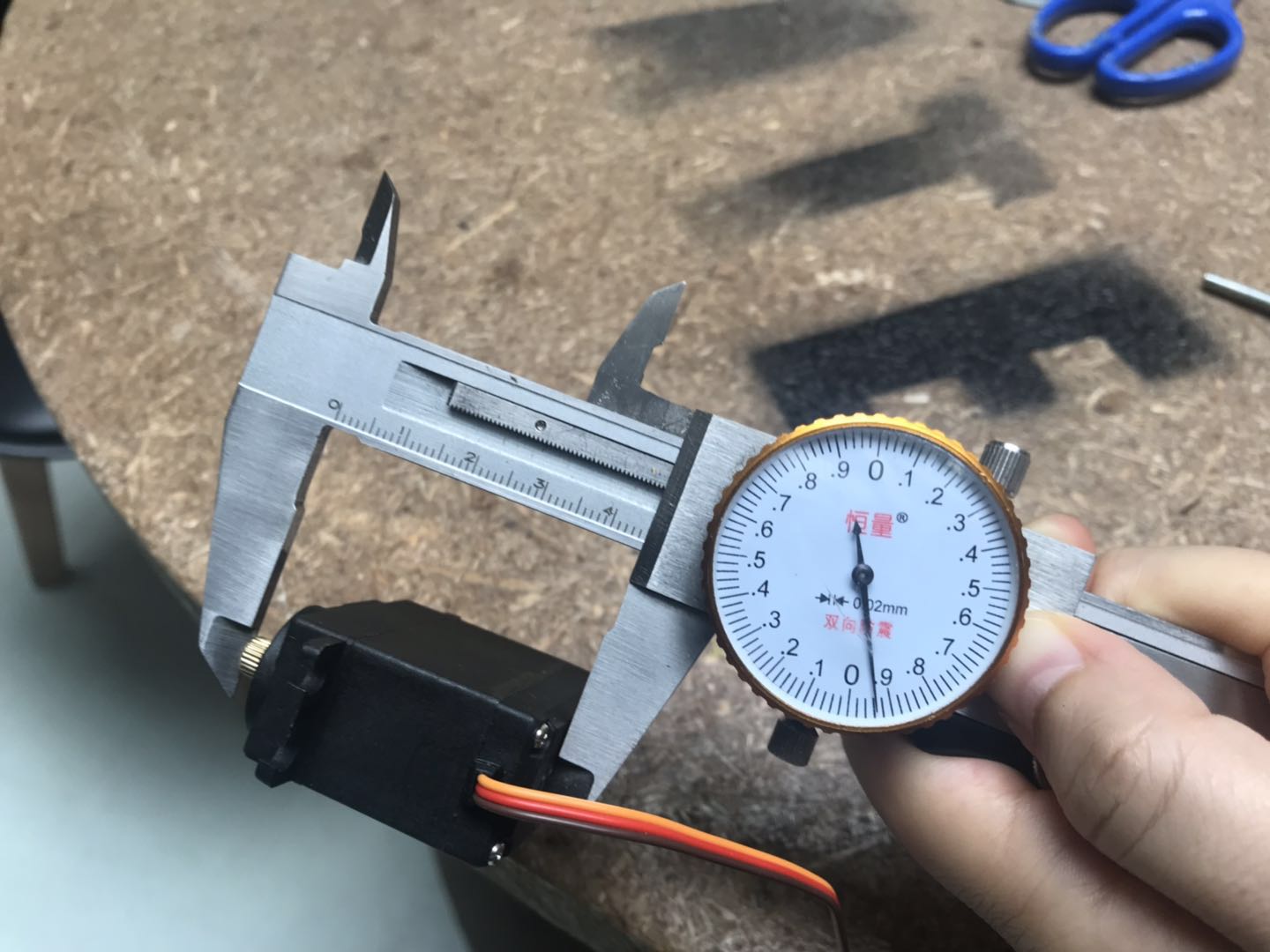 We figured this out before we even mounted all the parts together. The good things is: we won’t destroy anything by testing it. 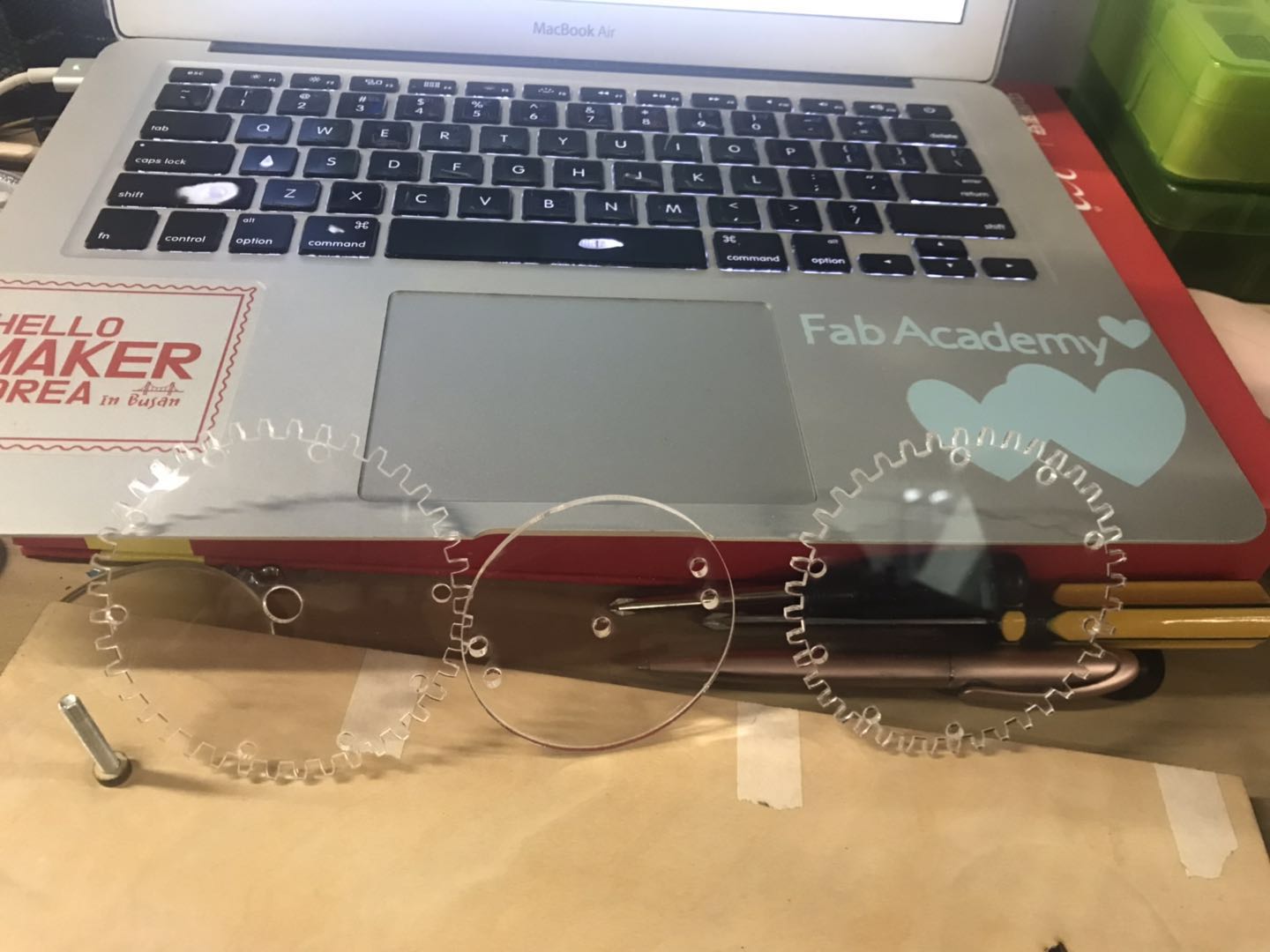 Setback No.2
And then we even more carefully redesigned the second time. This time, we recalculated the dimension, and moved the holes 10mm to the side, in this one, the axis for both the propeller, the top gear, and the bottom gear is exactly the same.

We happily ran downstairs to use the laser cutter to make new parts. In order to make enough room for the gears, we made the gears much larger than the previous version. You can see the new gears below. See the difference in the location of the 4 holes (they are not equally distanced from the edge anymore.) 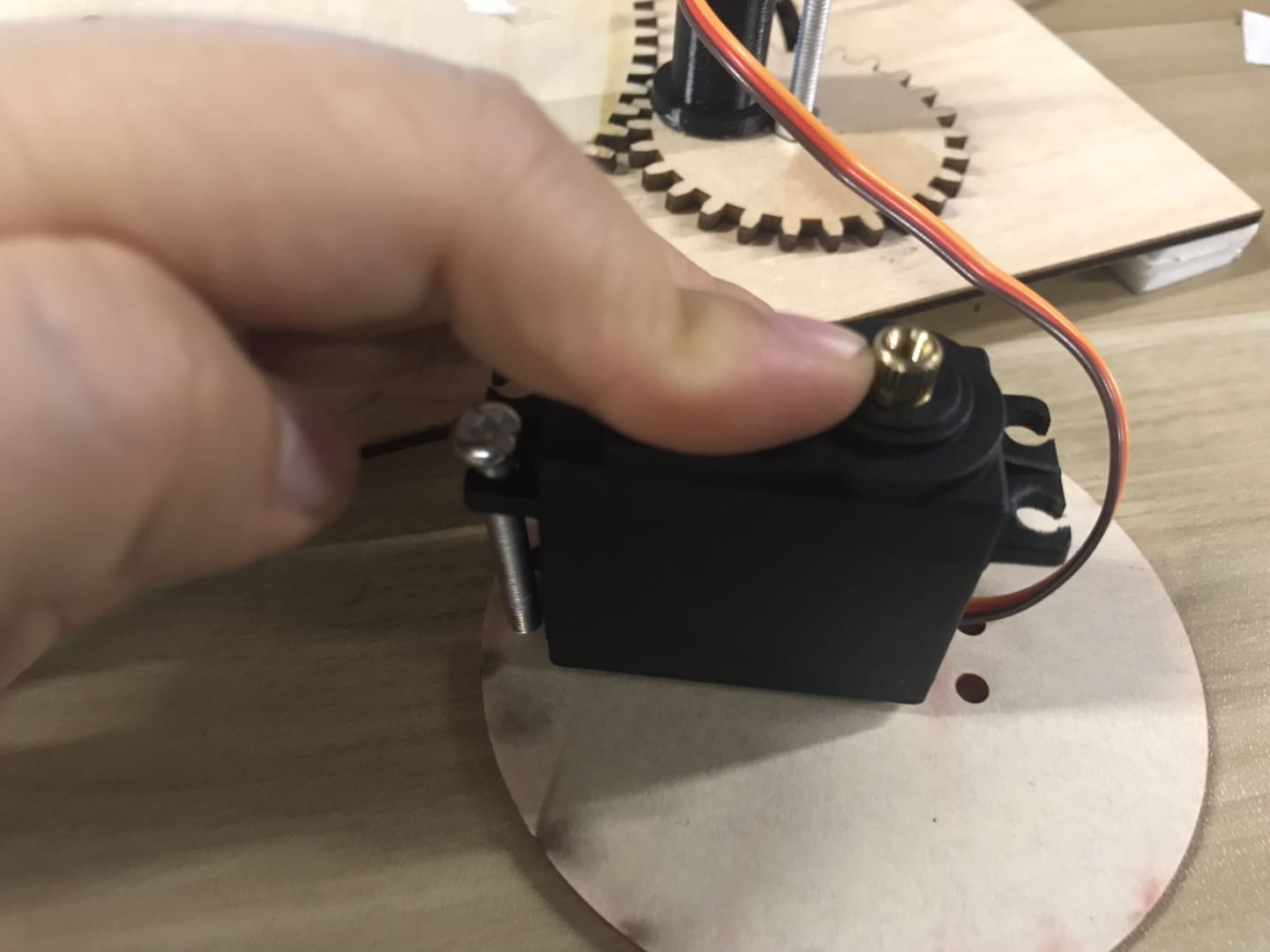 So time to think for a new solution.

The second idea was: Hey, if the top gear moves and the whole system moves, why do We have to build a 3-layer system, we can just put the motor beneath the central motor, or any of the current motors. In this way, when the motor moves, the gear attached to it will move.

With a second thought, the small gears at the side are not the right choice because if we dig a hole at the center for the motor to control one small motor, I’d need a support system for the motor to stay in its preset location for it to finish a drawing. And this will require me to change the design in a larger scale, which is not time efficient. So it came to the central large gear. 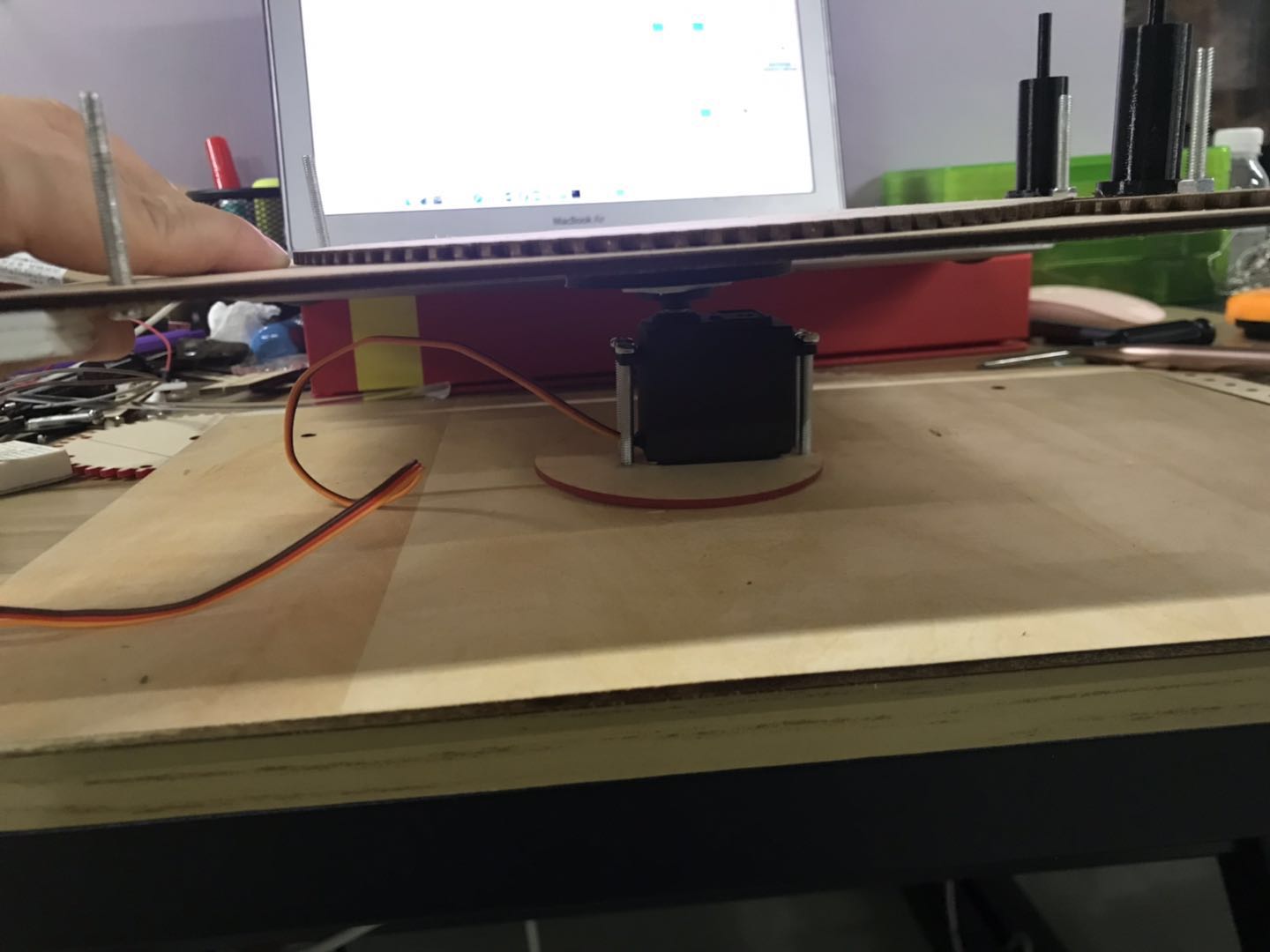 It’s good that we tried different ideas. But since it’s not working, we need to think for a better solution.

It suddenly occurred to me, if the gear that the motor controls needs to be at the top of the gear, why don’t we move the gear a bit lower than the current system! This is the lightbulb moment! We designed to make a chaisis for the current system. We got the plywood board from my previous cuttings as the base. And then, we made pinpoint three holes (we were thinking triangle is the most stable system), which we can use bolts as the support pillar, and nuts to calibrate and fasten the system to the right height. Luckily, we had several gears available now (with the previous several attempts), so we can test the system right after assembling it. It worked!! See the video below.

One more thing to mention, after everything is assembled, we found out the triangle system that we chose was not perfect. Because when the gears are moving, there are forces, and if we do not have a support pillar near the corner that is connected to the motor, it will lose balance and the gears won’t be attached correctly. So the next day, we added one more pillar near the corner that’s attached to the motor system.

Now it’s time to work on the electronic part.

We need the machine to work very easily, which means it only needs to turn in one directly continuously. And when it finishes one drawing, I’ll stop the machine, change the position of the pen by changing to different slots of the pen holders.

So we used the following Arduino code:

After uploading the code to the board, we can disconnect the Arduino from the laptop, and then use an adaptor to connect it to the power supply directly.

Here is the link to our group assignment page of machine design.