This week I learnt about networking and communications, how to connect things to networks.
This week’s assignments include:
- Individual assignment: design, build and connect wired/wireless node(s) with network or bus addresses.
- Group assignment: send a message between two projects.

I decided to follow this Fab Academy tutorial to build serial bus projects that talk between the bridge and nodes.

First of all, I design the bridge with Eagle.
Here are the components needed.

I followed the skills learnt in the previous week to use Eagle in designing the board. 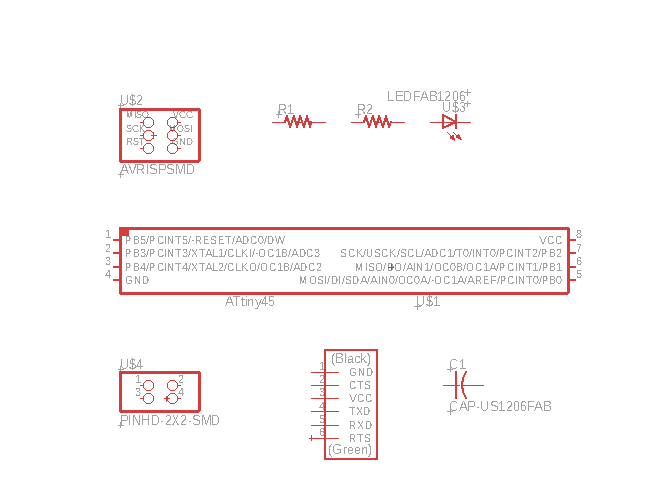 (the bridge - parts are added) 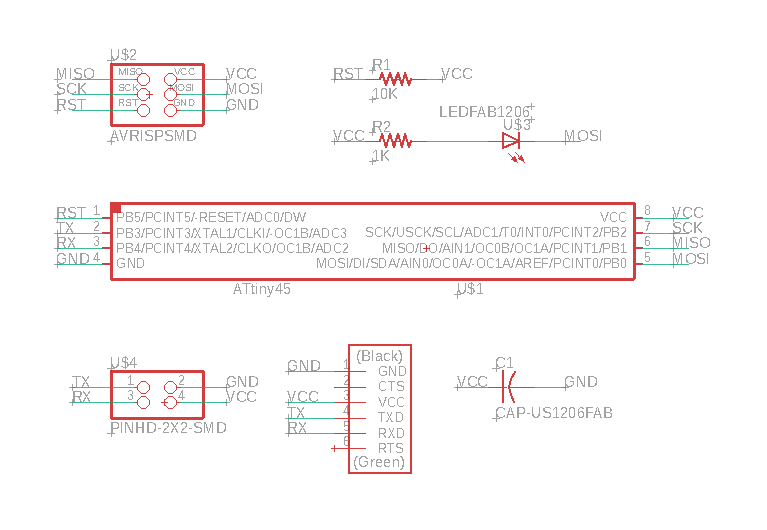 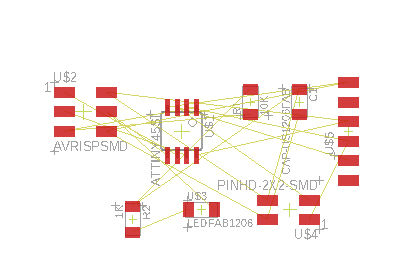 (the bridge - ready for routing) 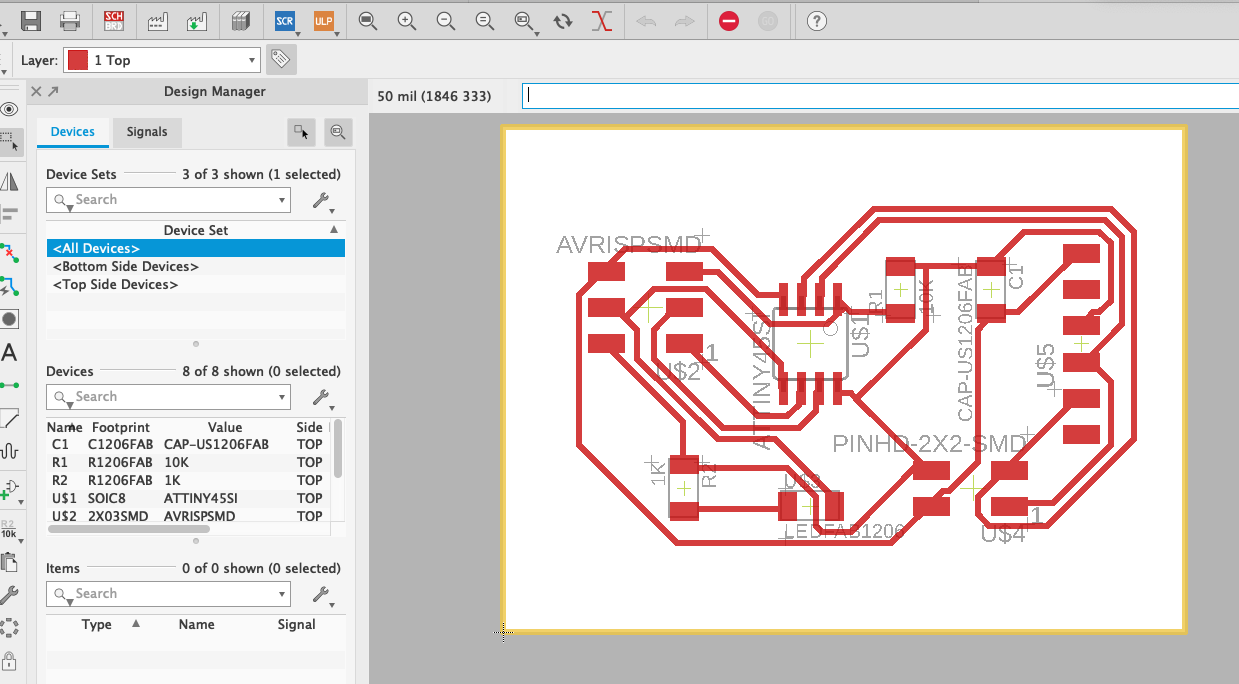 (the bridge - design ready for milling) 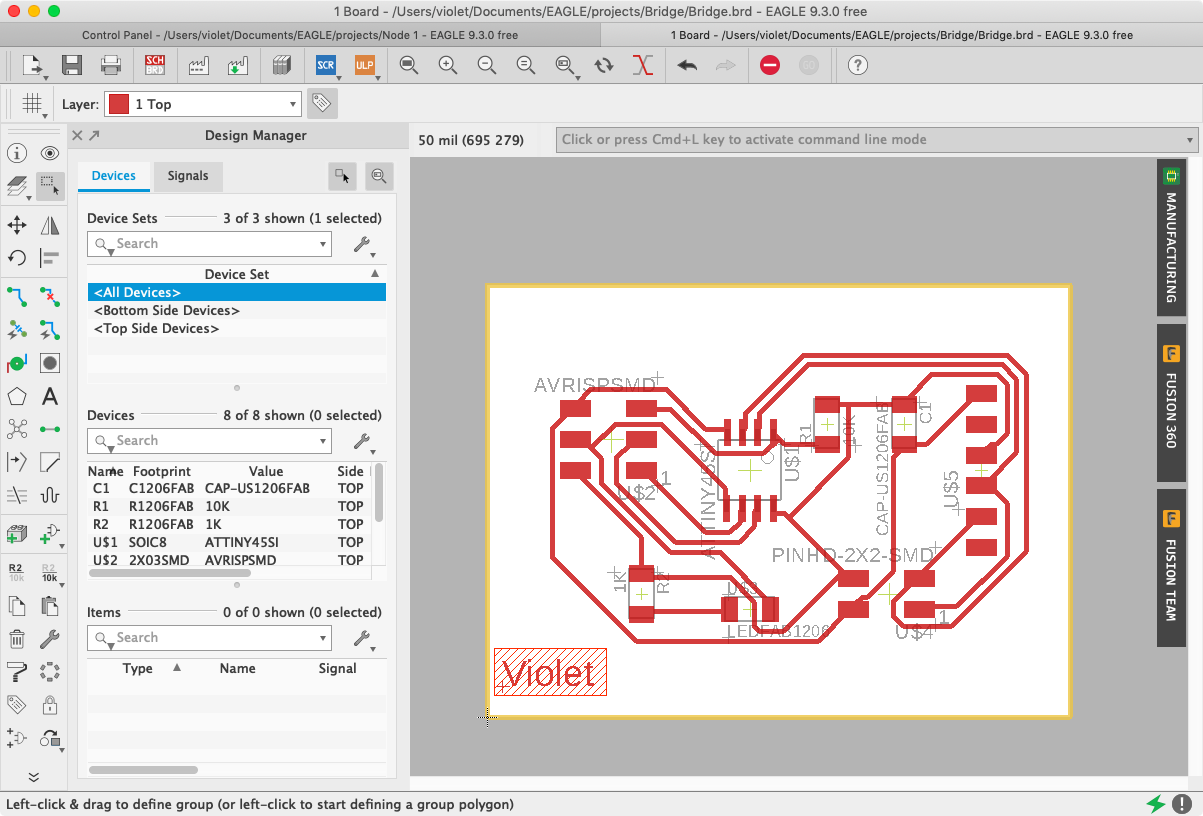 And now I will design two nodes with Eagle.
For each node, I will need the following components.

Similarly, I used skills learnt previously in designing the board on Eagle. 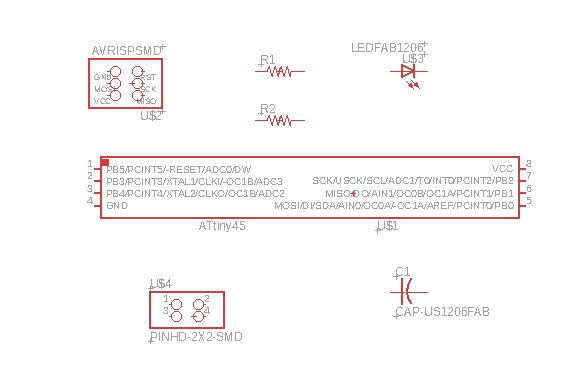 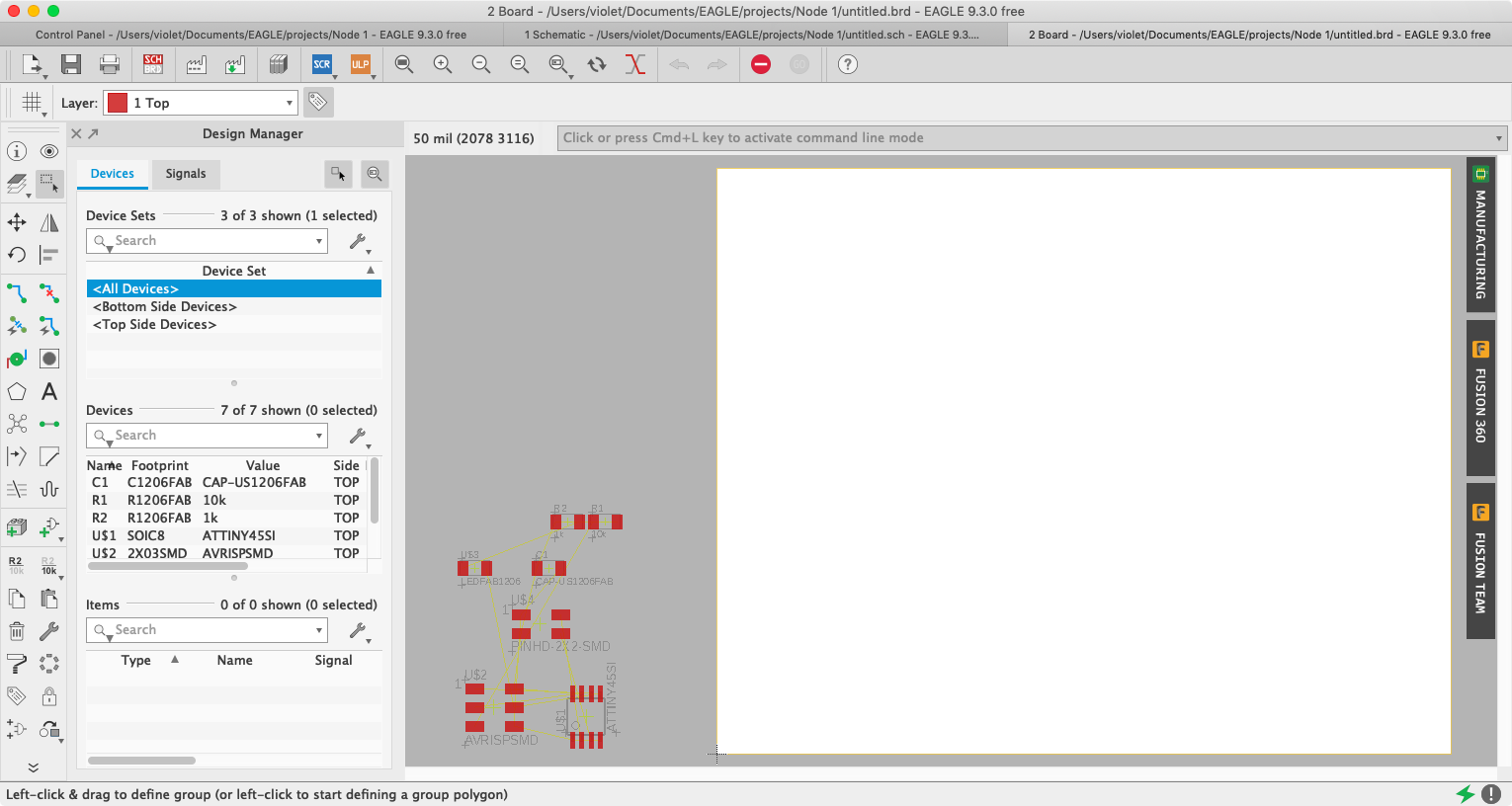 (the node - parts to be routed) 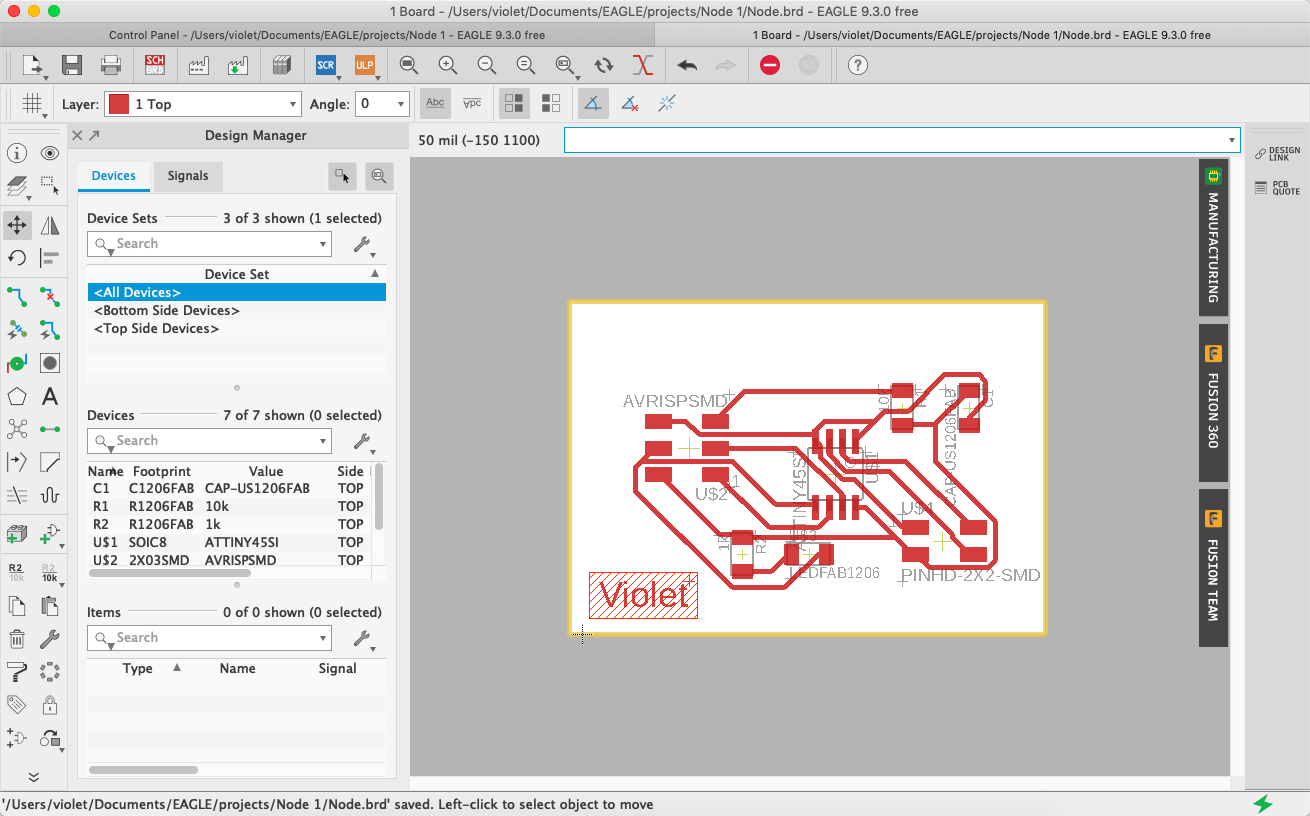 (the node - reading for milling)

Here are the links to the schematics, traces and outlines of the bridge and node.
（files to be updated)

Now I have both the bridge and the node design ready, I use Fab Modules to create .rml files for milling the PCB board on Roland-SRM20. Here are the links to the files.
bridge traces
bridge outline
node traces
node outline

And now I have the board ready. I begin to search for all the components I need for the bridge and two nodes. 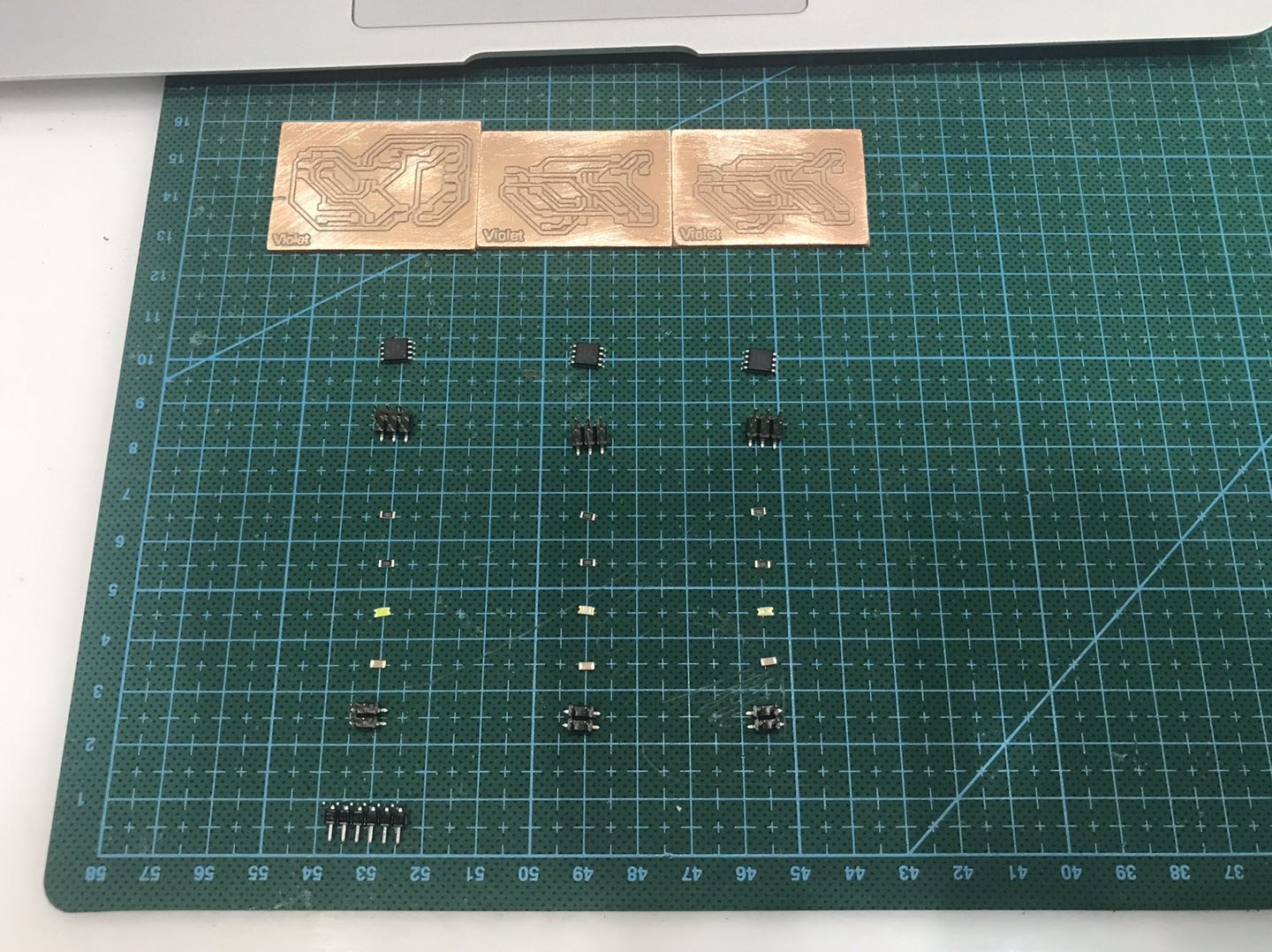 I soldered the components onto the board and here they are! 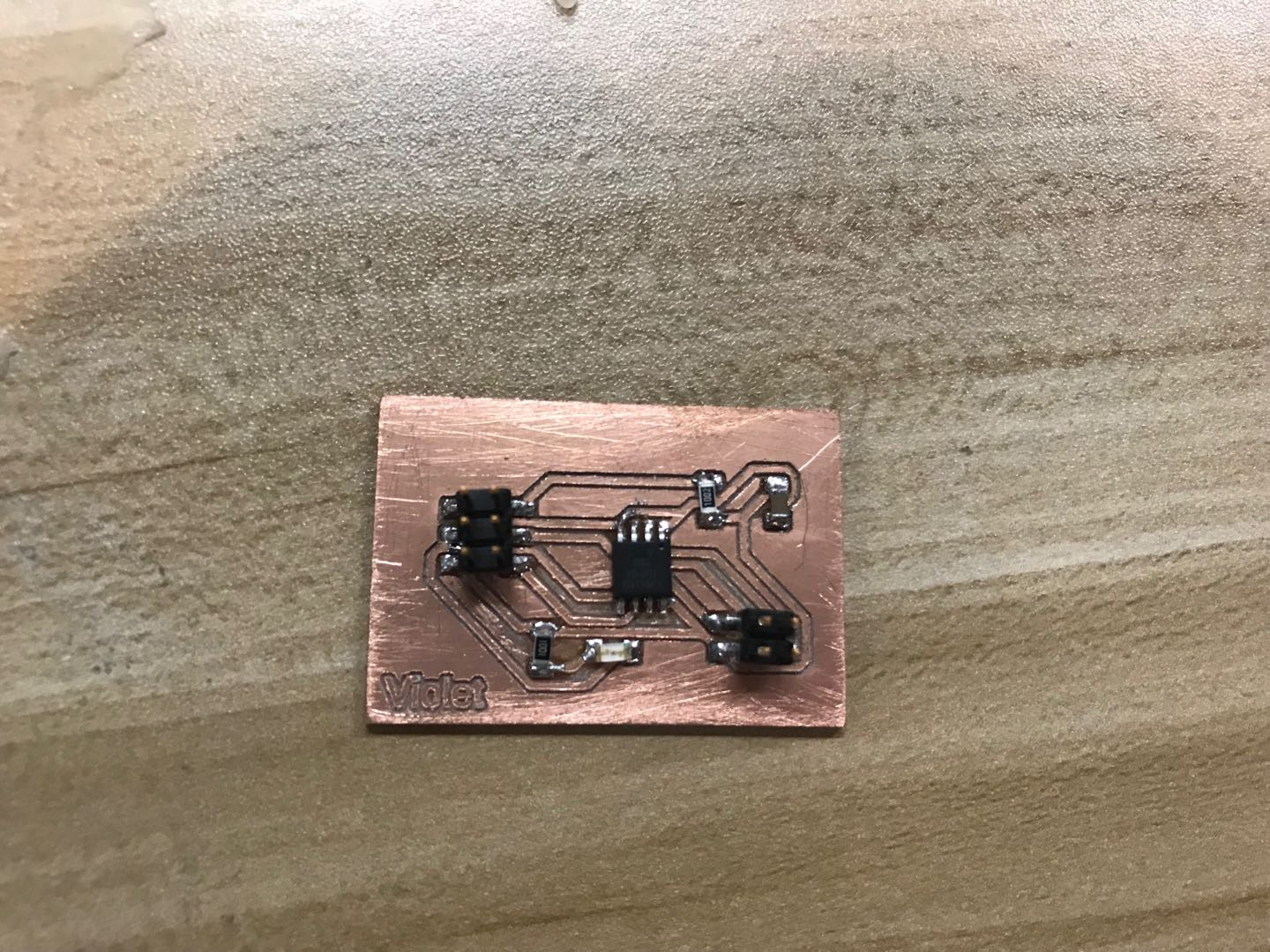 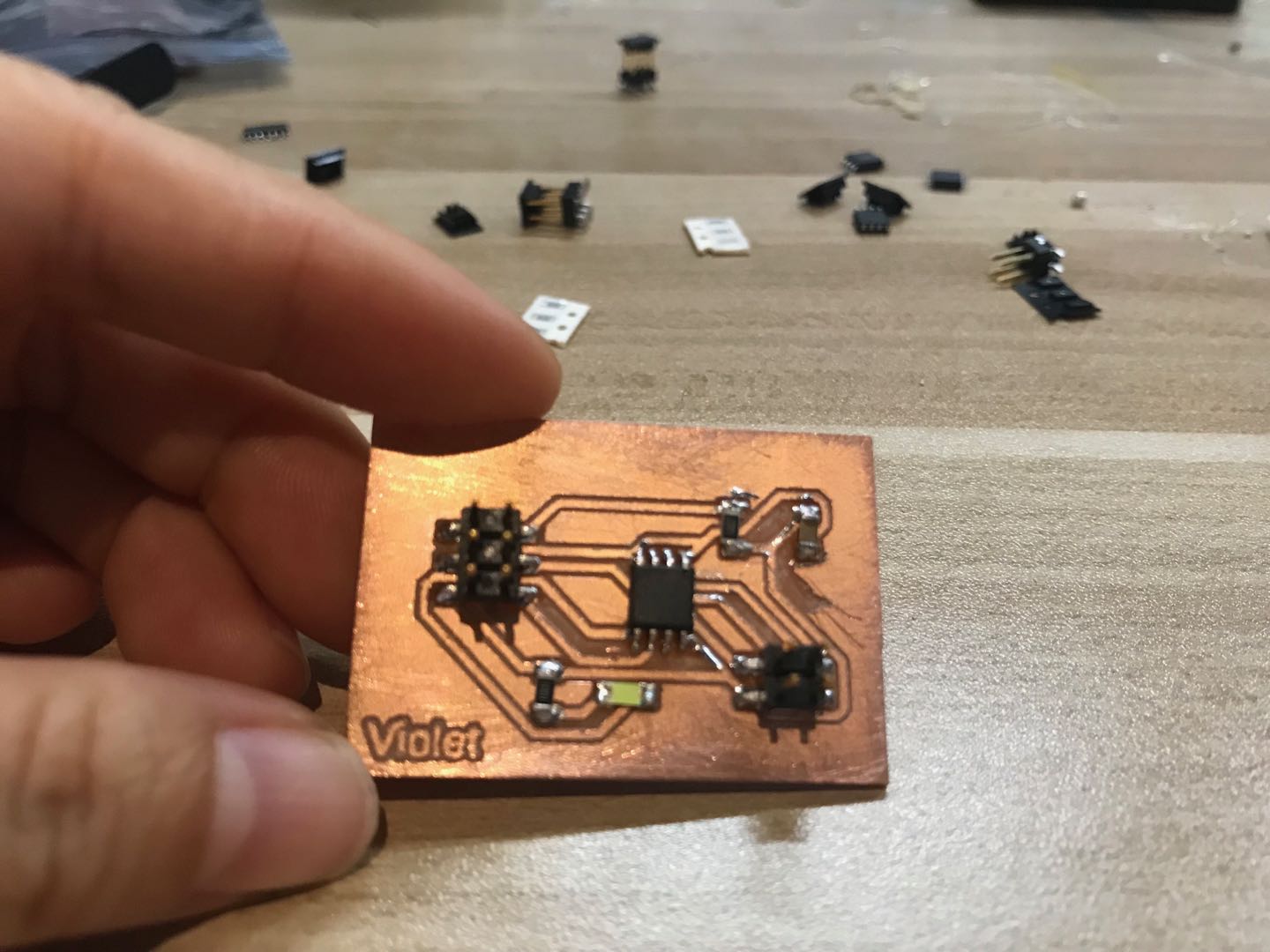 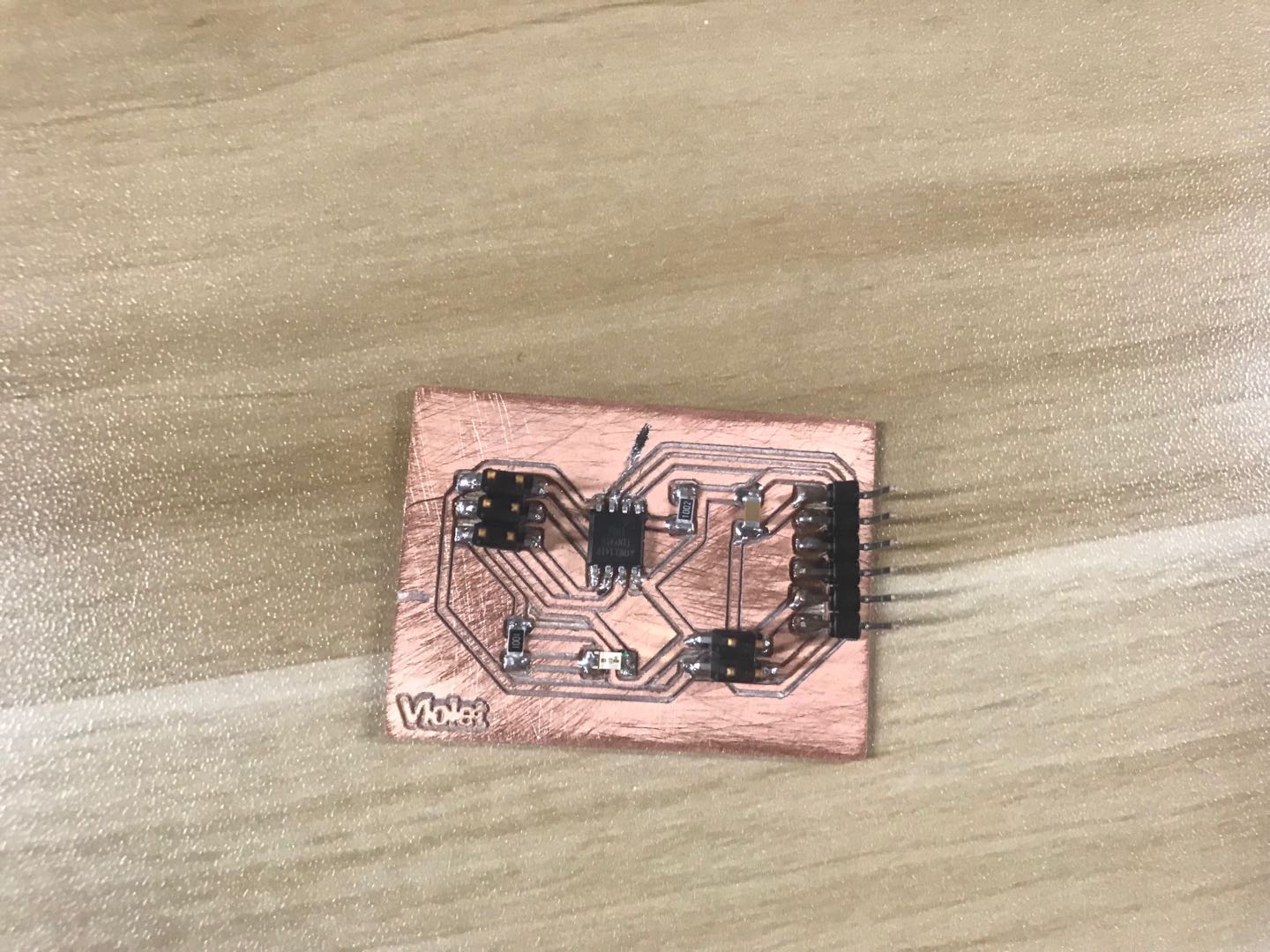 After the boards were soldered, I connected them to my MacBook respectively to check whether the board is good. I was able to burn bootloader for the bridge, but not the nodes. After checking the circuits again and again, I realized there was one main design fault in my PCB design, I marked the VCC pin of the ATtiny45 as GND, which means I had two GND pins on the chip. 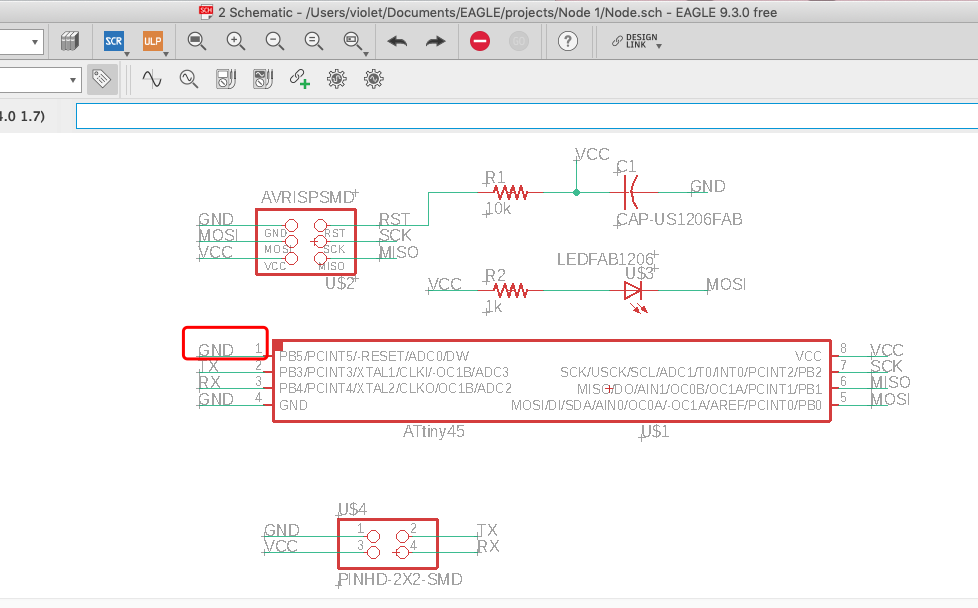 So I updated the design, and the following is the correct one. 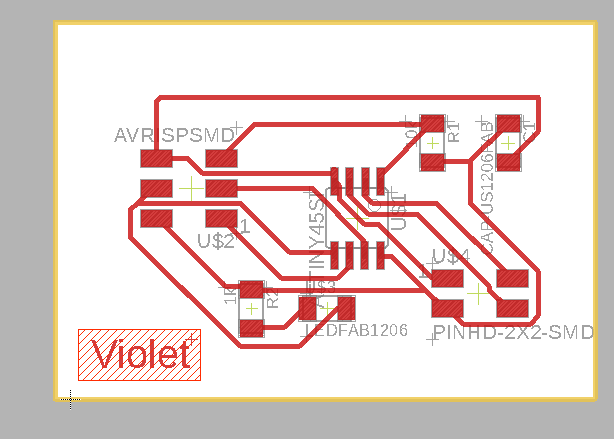 However, before going to SZOIL to fabricate another two nodes with the CNC, I decided to fixed the current ones. I managed to fixed it, please see the following image, there were three fixes: 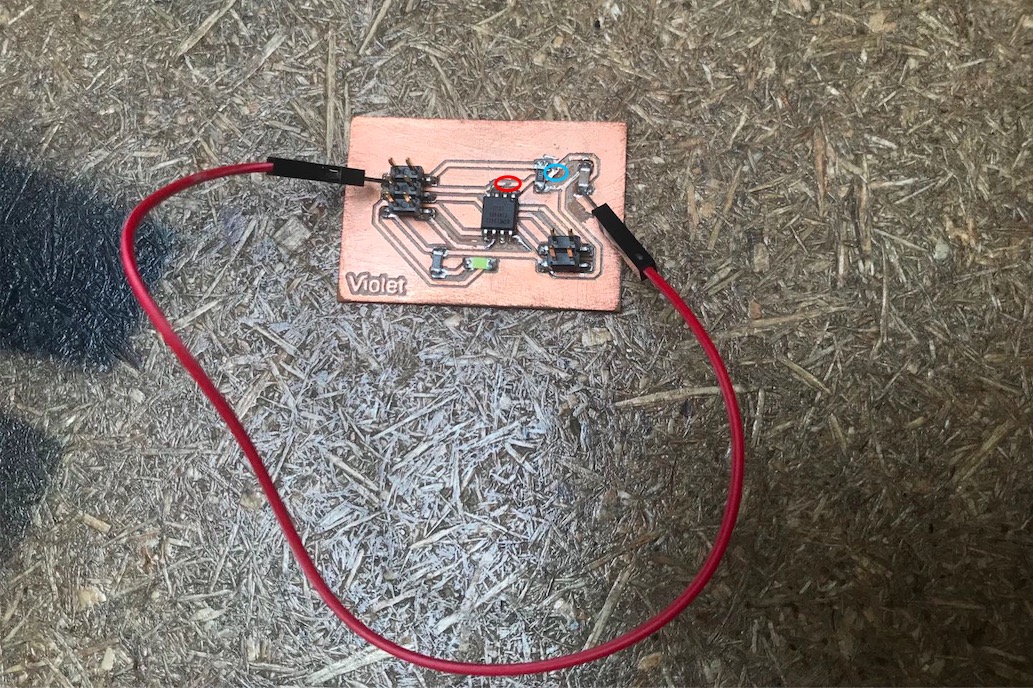 And I connected it to my MacBook to check whether it’s functional. It worked fine!! (And later I updated the soldering to make the fixed cable more stable.)

Now double check to test whether these three boards are working.

I connected the bridge to the USBTiny and then my MacBook Air.
Open Arduino IDE, chose the right settings on Tools (Board: ATtiny25/45/85; Processor: ATtiny45; Clock: Internal 1MHz; Programmer: USBTinyISP); and then click “Burn Bootloader”, it showed “done burning Bootloader”!
And then I used the blink example to test whether the board was functional with LED blinking. Since the LED is connected to pin PB0, I changed the Arduino example code a little bit, as the followings:

It worked!! See the video below.

I used the same method to test Node1 and Node 2, they all worked. See the videos below.

With the boards ready, it’s time for flashing the board.

First of all, download the hello.bus.45.c and hello.bus.45.make on to your computer, for mine, I downloaded them onto my desktop.

Modify the code to set the ID for each board, I decided to use 0, 1, 2 for bridge, node 1 and node 2 respectively.

I open the [hello.bus.45.c] code with Visual Studio Code, and search for the node ID, it was one Line 42, with the default ID as “0”, as shown in the following code line.

Since the default ID is the same as my expected ID for bridge, I used the default code directly.

It was successfully flashed. 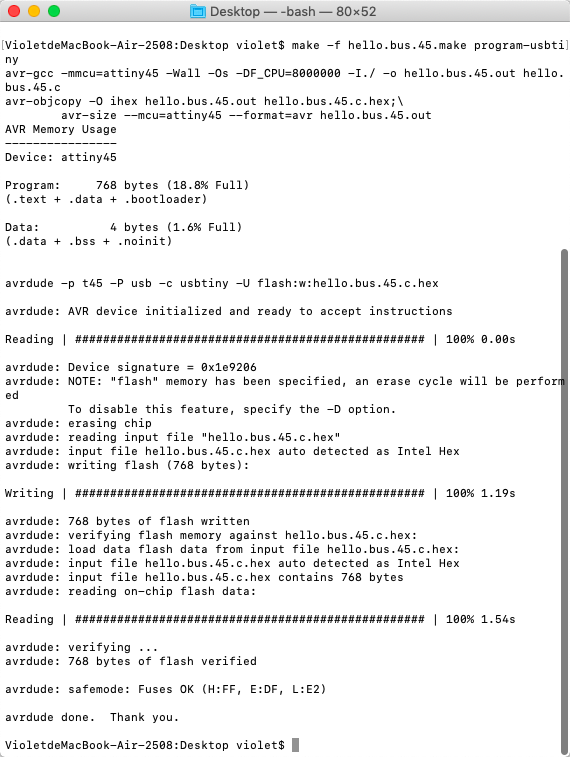 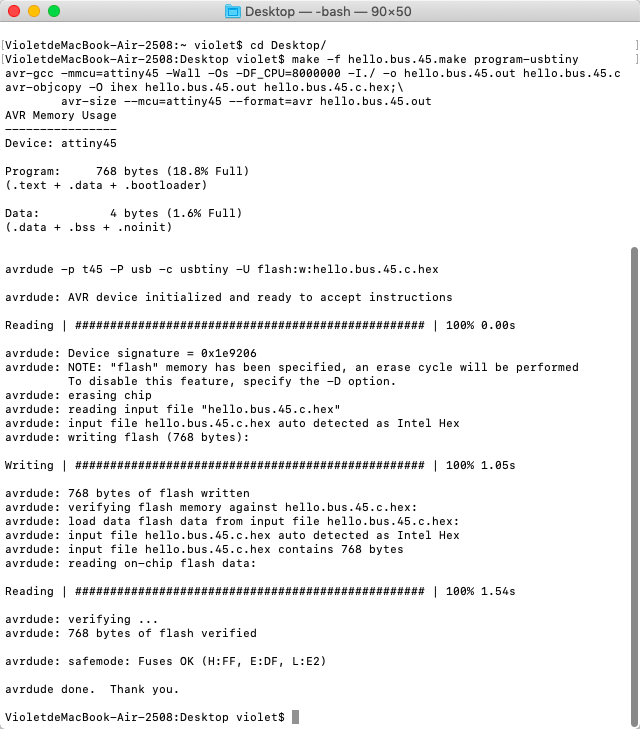 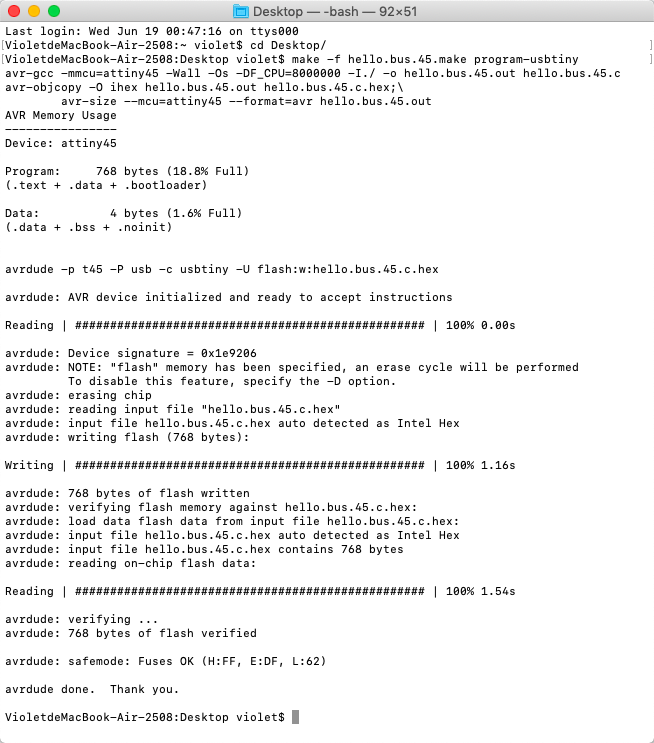 Here are some notes to be taken when wiring up the pins. I made a mistake in the first attempt for mixing the pins and it did not work.

Here you can see my wiring (it might look messy with so many jumper wire and breadboard, but it did work :D ) 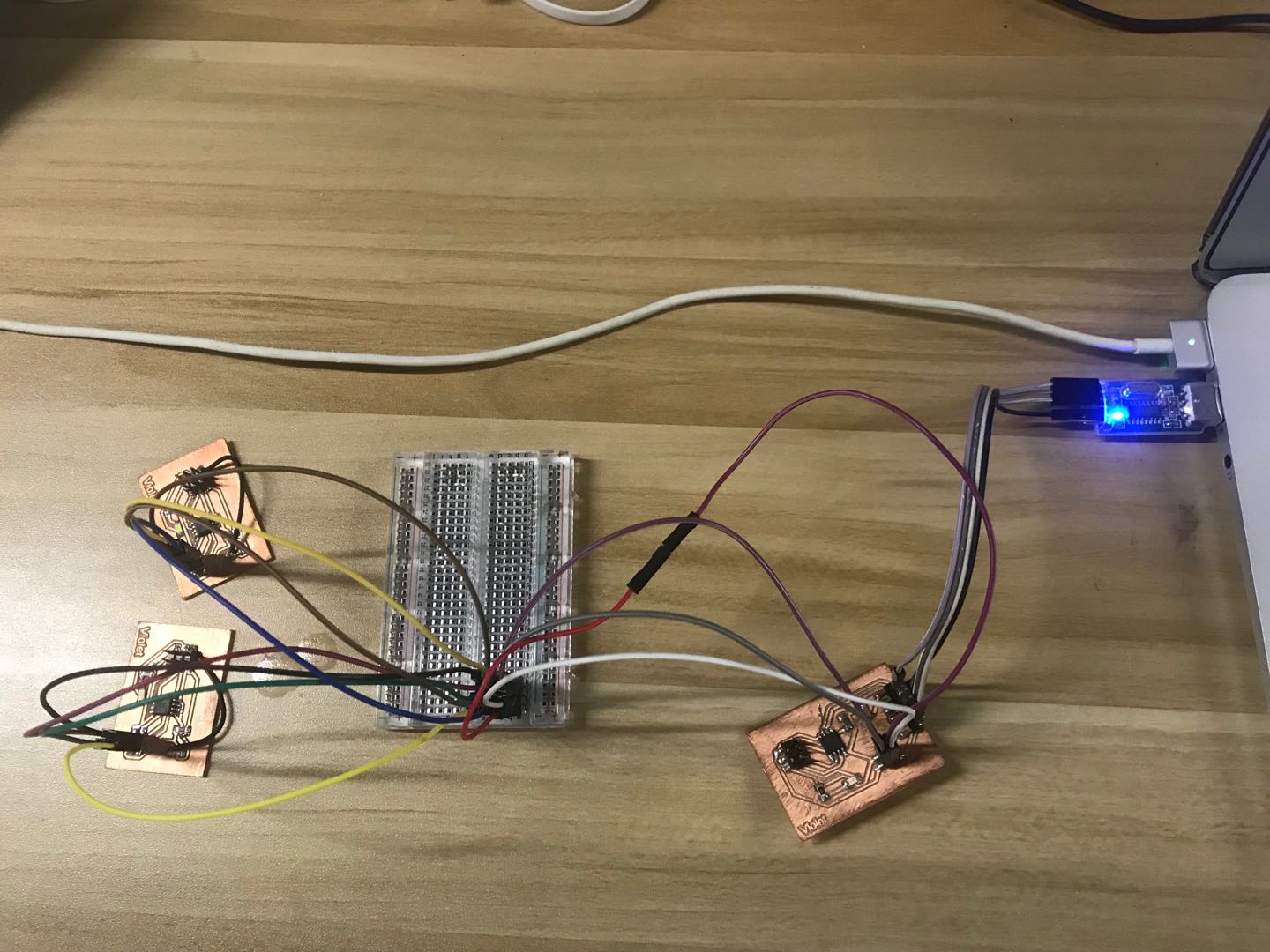 After correctly wiring up, I opened the Arduino IDE and then click the upper right corner to open the serial monitor window. I entered the following numbers (0, 1, 2) respectively and clicked the “enter” key to see the results. You can see from the videos below.

From the above videos, you can see when entering different numbers, the system sends different signals and commands between the boards.

I’d like to give my huge gratitude to Salman Faris, my friend, Seeed Ranger as well as the Fab Academy Instructor at Fab Lab Kochi for giving me remote guidance and instruction with patience and kindness!! <3