This is a group project with Paul and Sophie. Our group docs are here. 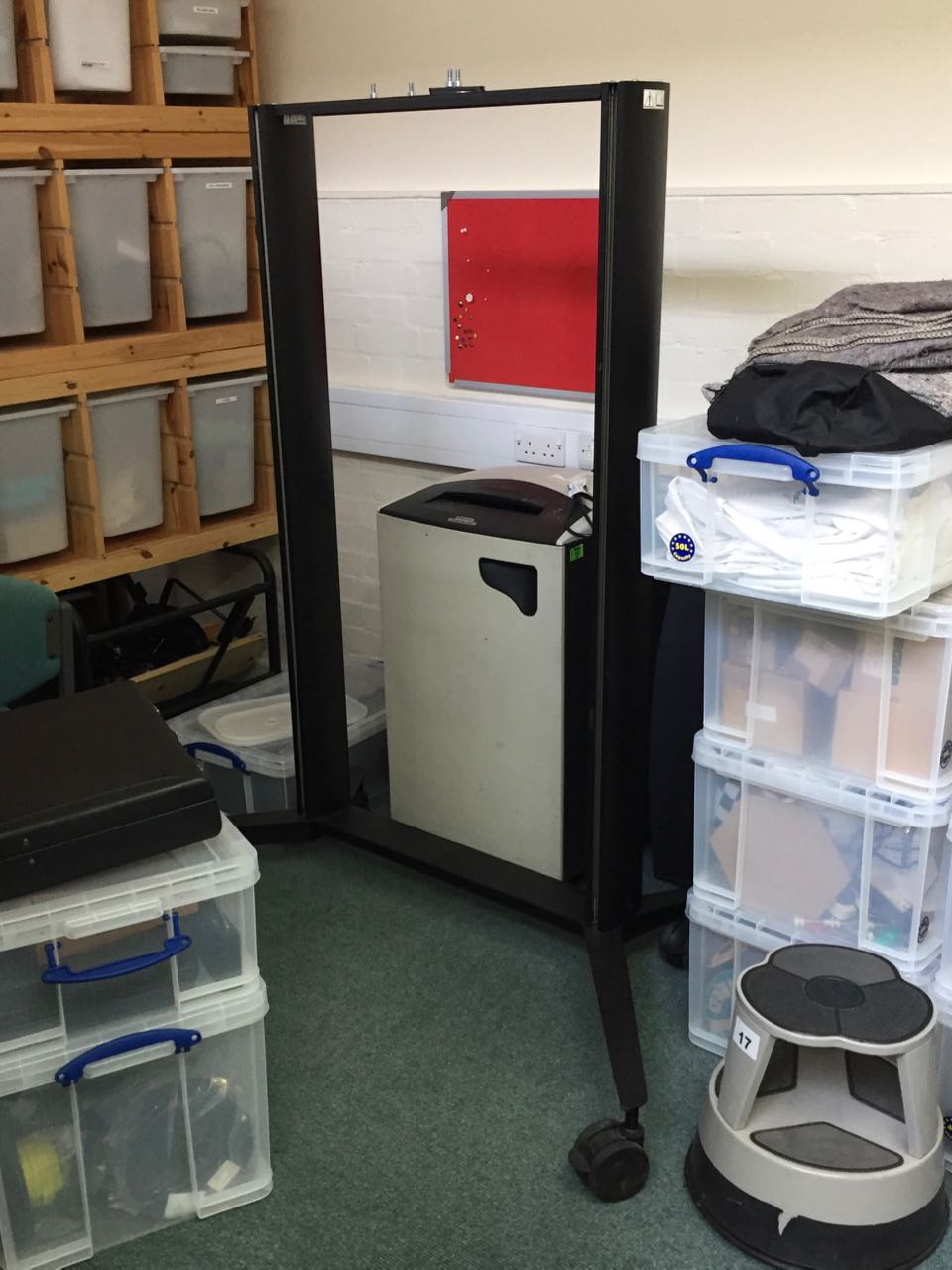 The lab has an existing frame that we’ve decided to use to house our machine. This means we can mount our motors and the workpiece together in a stable and adjustable configuration without having to go and buy materials to make it by hand.

The frame has slots running down each leg, which function in a similar way to 80/20-style aluminium extrusion. It includes two steel backplates with threaded 8mm holes that fit into these slots, and accept a bolt from the front. 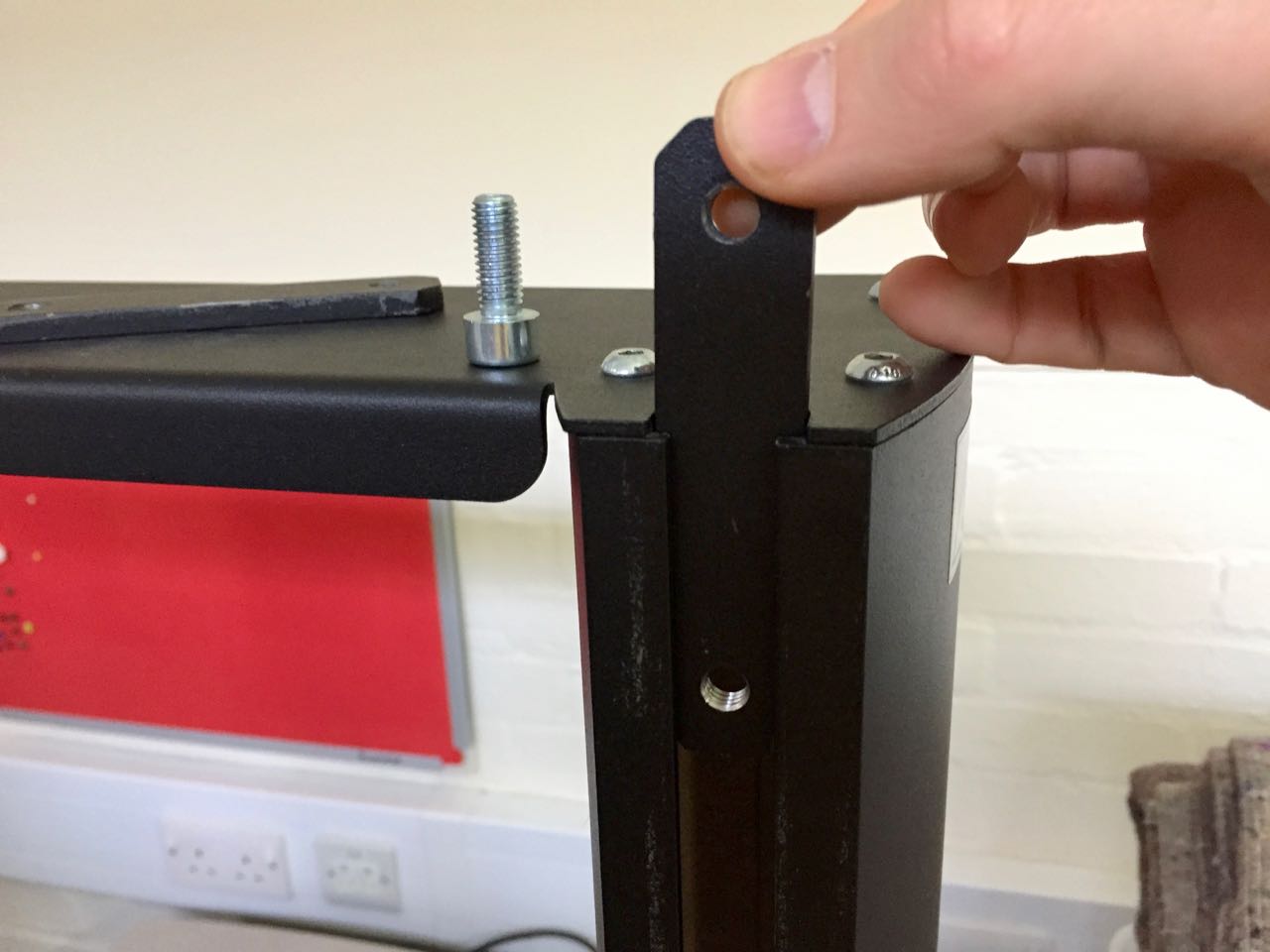 We can use these brackets to hold some parts of the assembly, and make more to hold other parts.

Making brackets to house the motors

We’re using Nema 17 motors. I wanted to mount these onto brackets, which could be attached to the existing backing plates. By referrring to the datasheet, I was able to design a simple bracket in Illustrator with holes correctly sized and spaced for both the motor, and the backing plate. 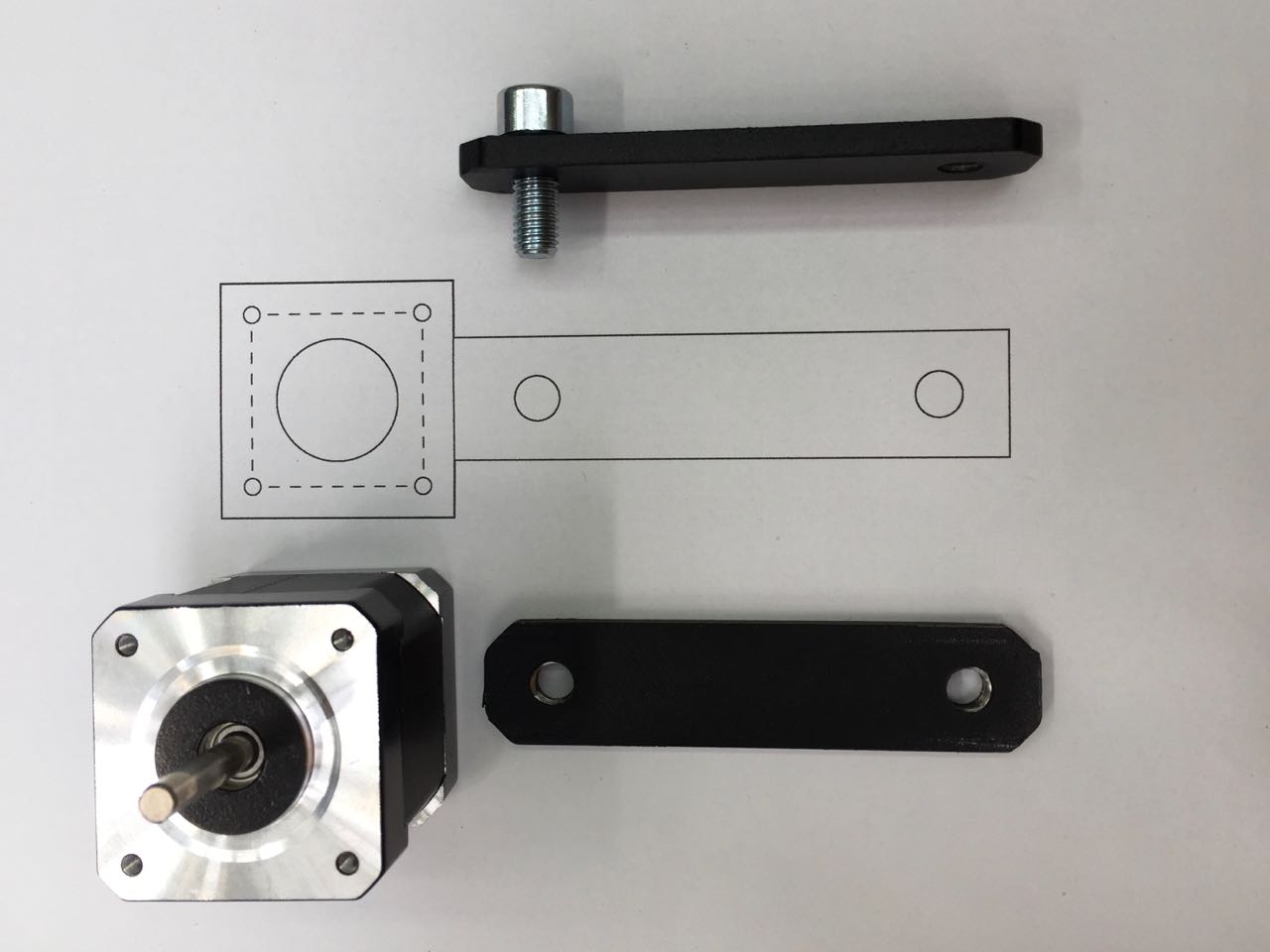 I cut a test bracket out of 3mm MDF. This worked pretty well, but was too thing for the length of bolts we have in the lab. SO for future versions, I used 5mm MDF. 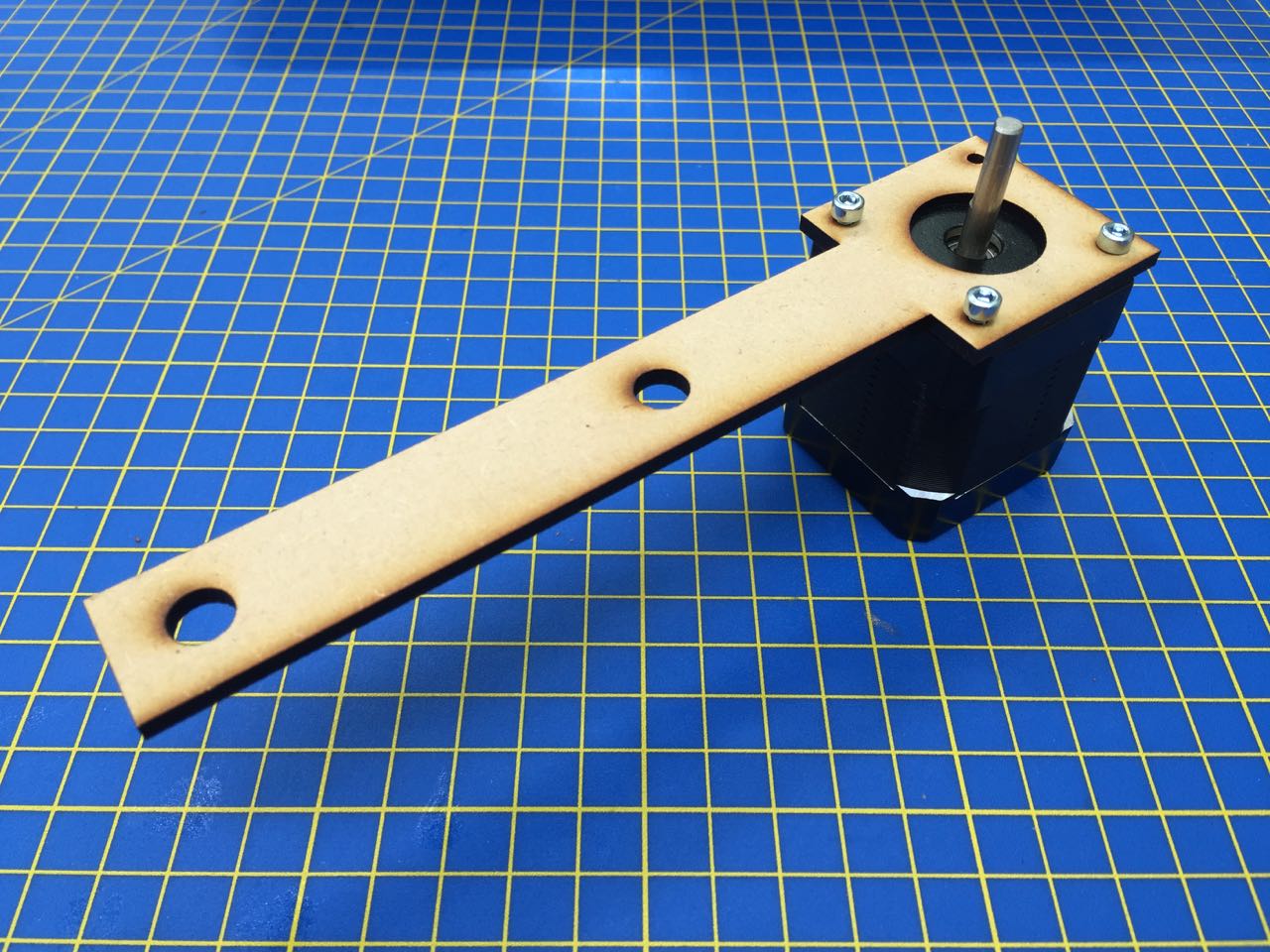 Making gears for the chain

As we don’t have a timing belt, we’re using chain from an old set of blinds. The motors need gears with sprockets to match the dimensions and spacing of the balls on the chain. 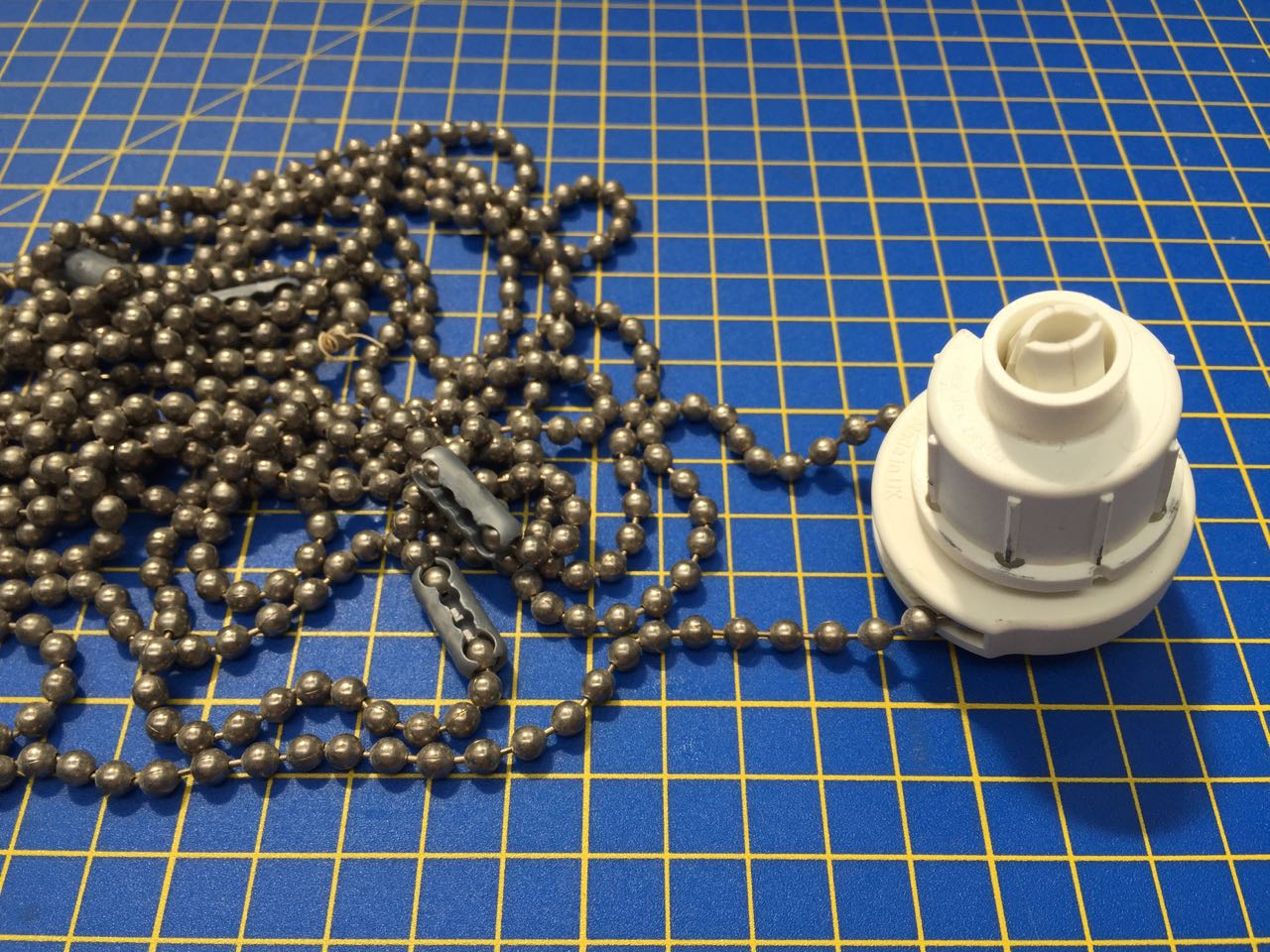 By disassembling the blind mechanism, I was able to expose the gear used in the blind, and measure it so I could make my own. 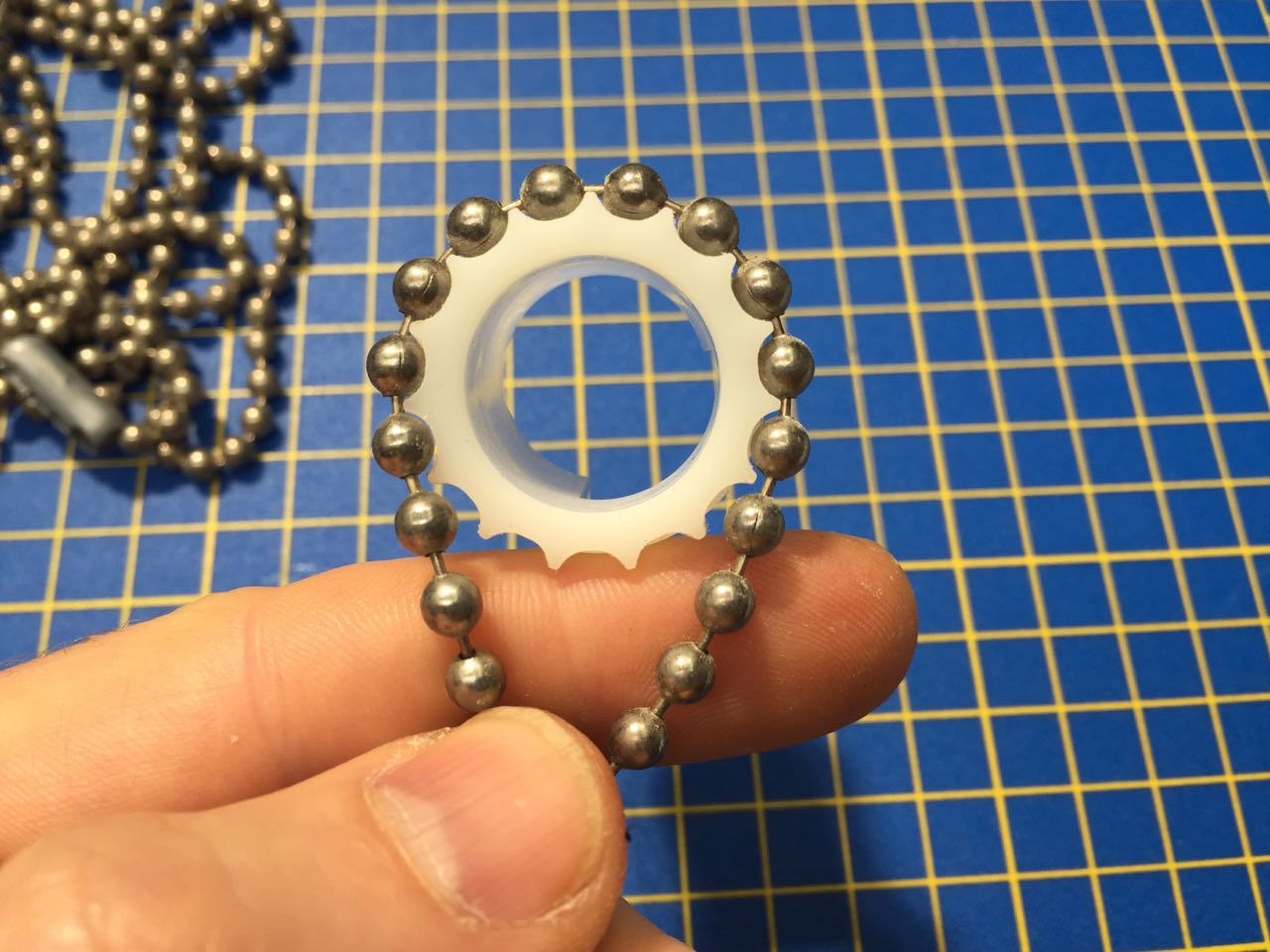 I designed the parts in Illustrator, and started by making two versions, one with sprockets sized exactly to fit the balls, and one with shallower sprockets, more like those on the blind mechanism gear. I cut these in MDF, and tested them out, to find that the latter design worked better. 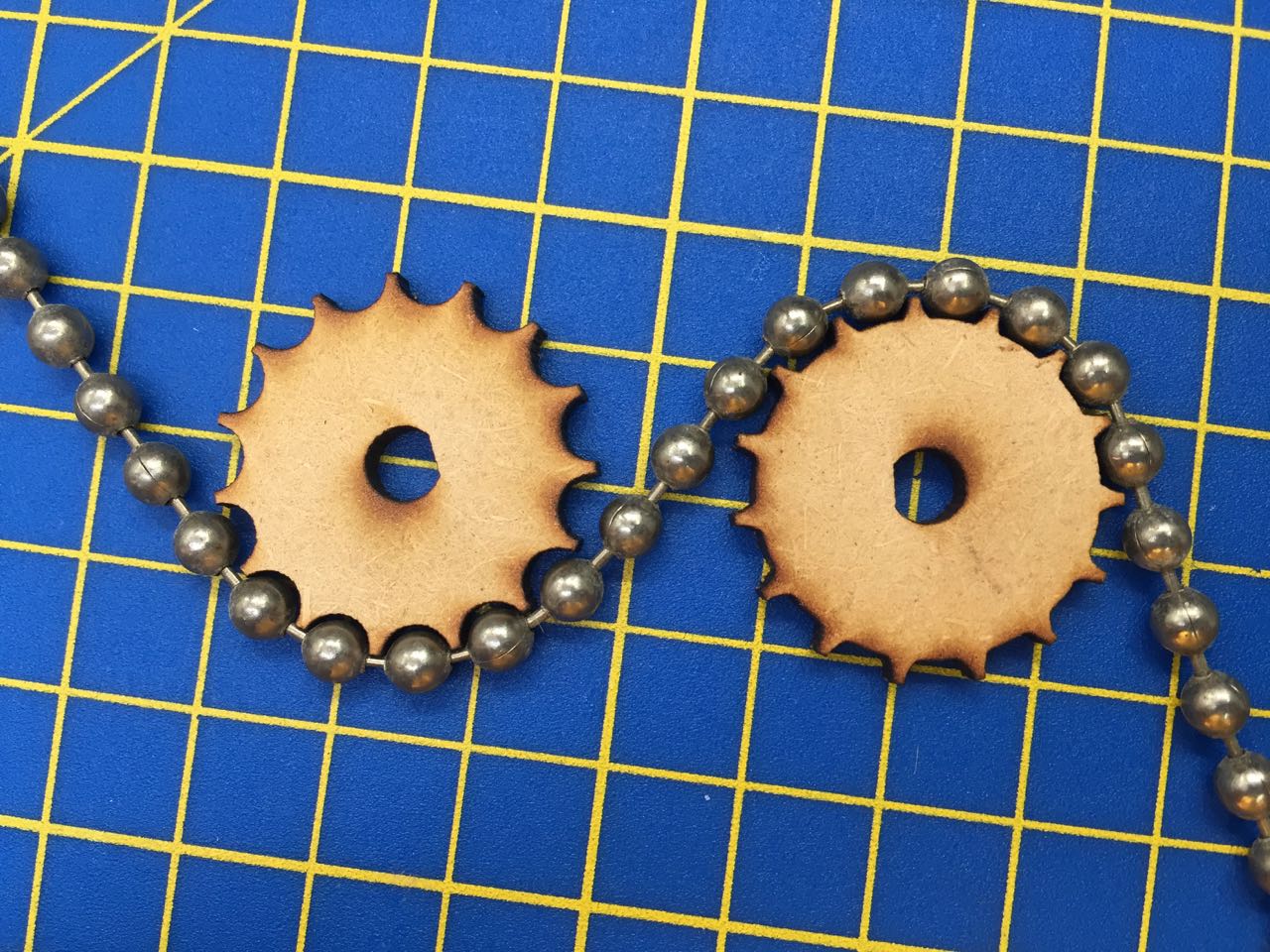 I made the next version out of 5mm acrylic, and also cut some fences to go on either side of the gear to stop the chain from slipping off. 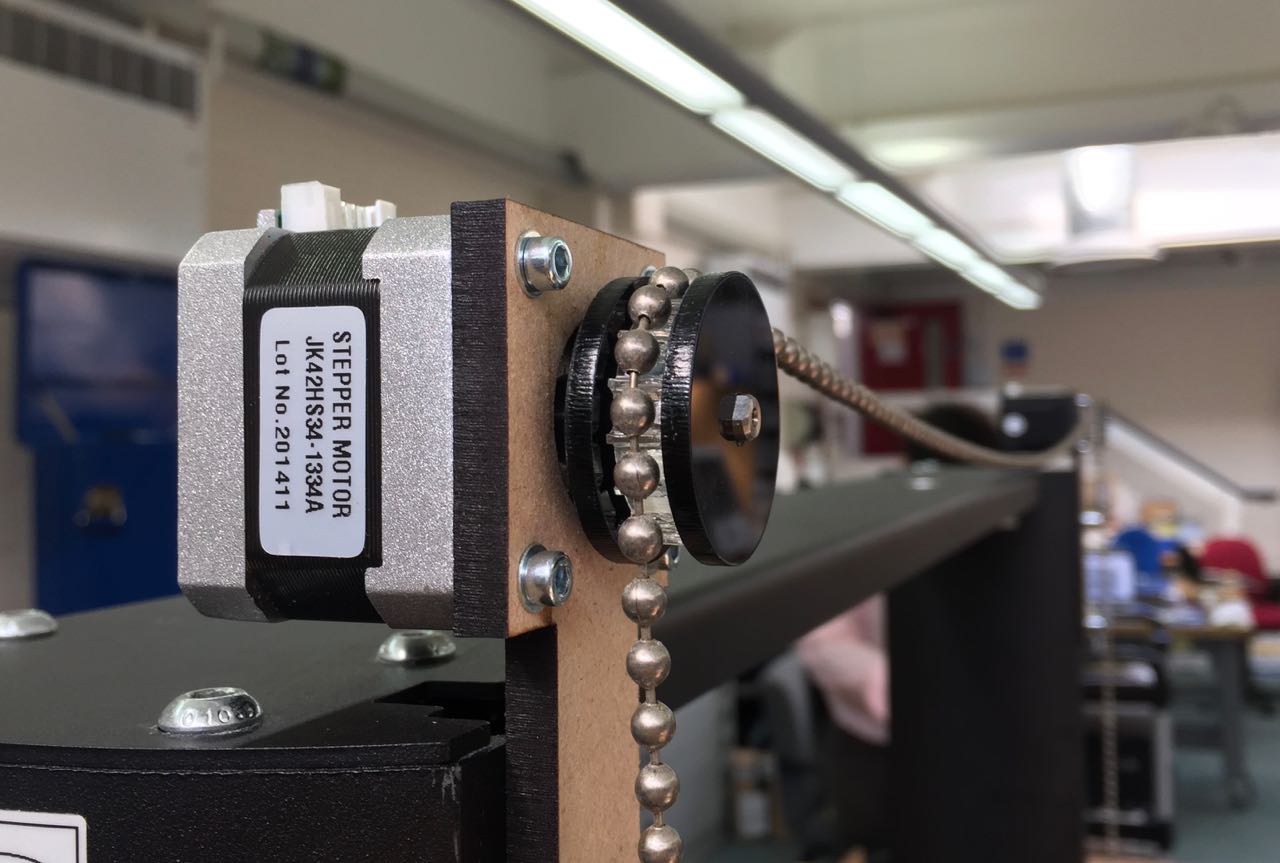 As the frame only came with two backing plates, we needed to make some more to hold the drawing surface. This frame isn’t designed with user-customisation in mind, unlike 80/20, so it was tricky to make new plates that would work.

The existing plates have threaded holes ot accept an M8 bolt. This draws the backing plate to the front of the frame and pressing it against the frame and the part attached in front. I don’t have the tools or materials to make threaded holes in 5mm steel, so I had to try other ways to create threads.

The first attempt was to use locknuts mounted in MDF. This worked, through the MDF tended to delaminate, and the only locknuts we have are M6, which is a little bit too small for this frame. 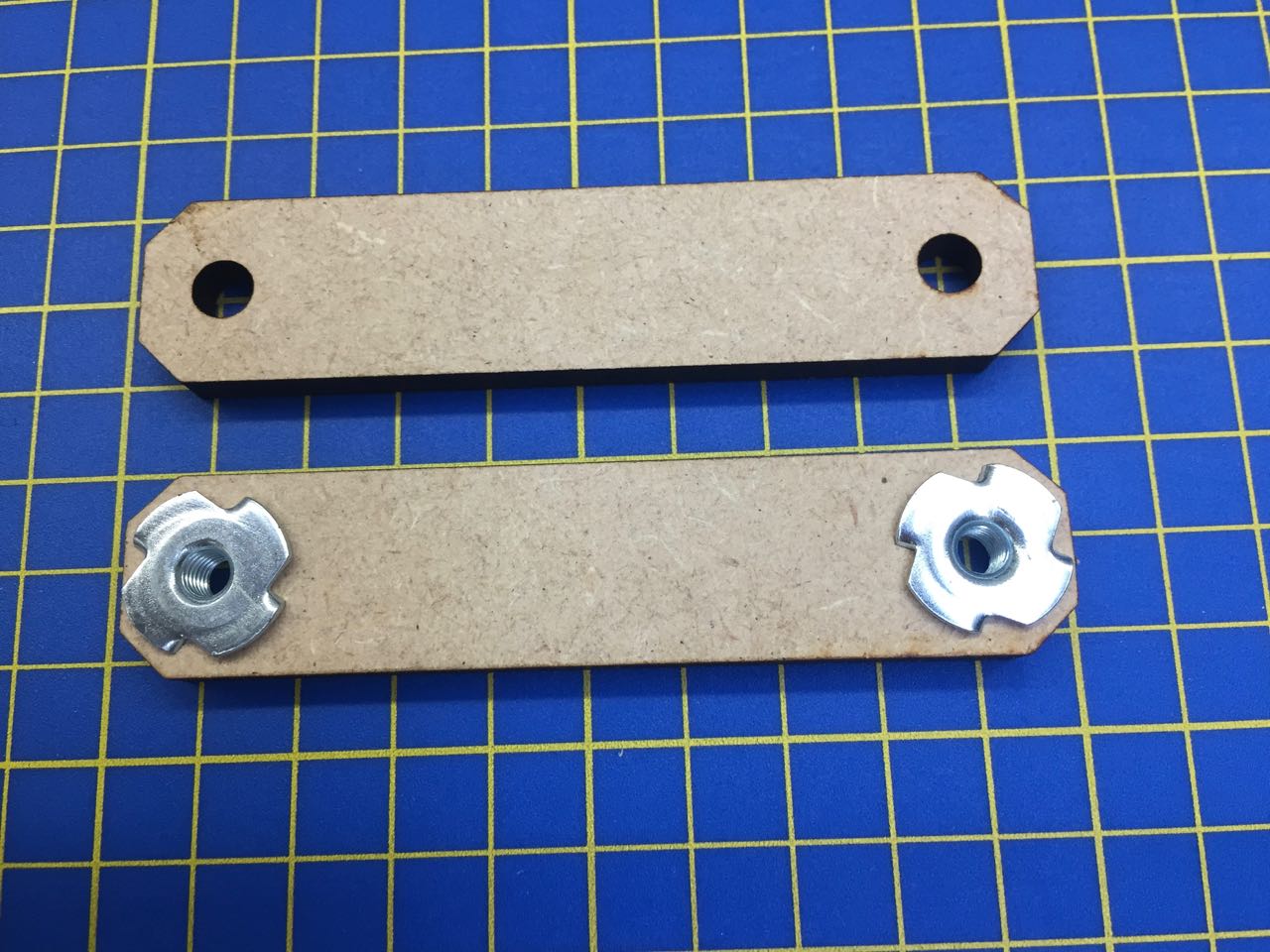 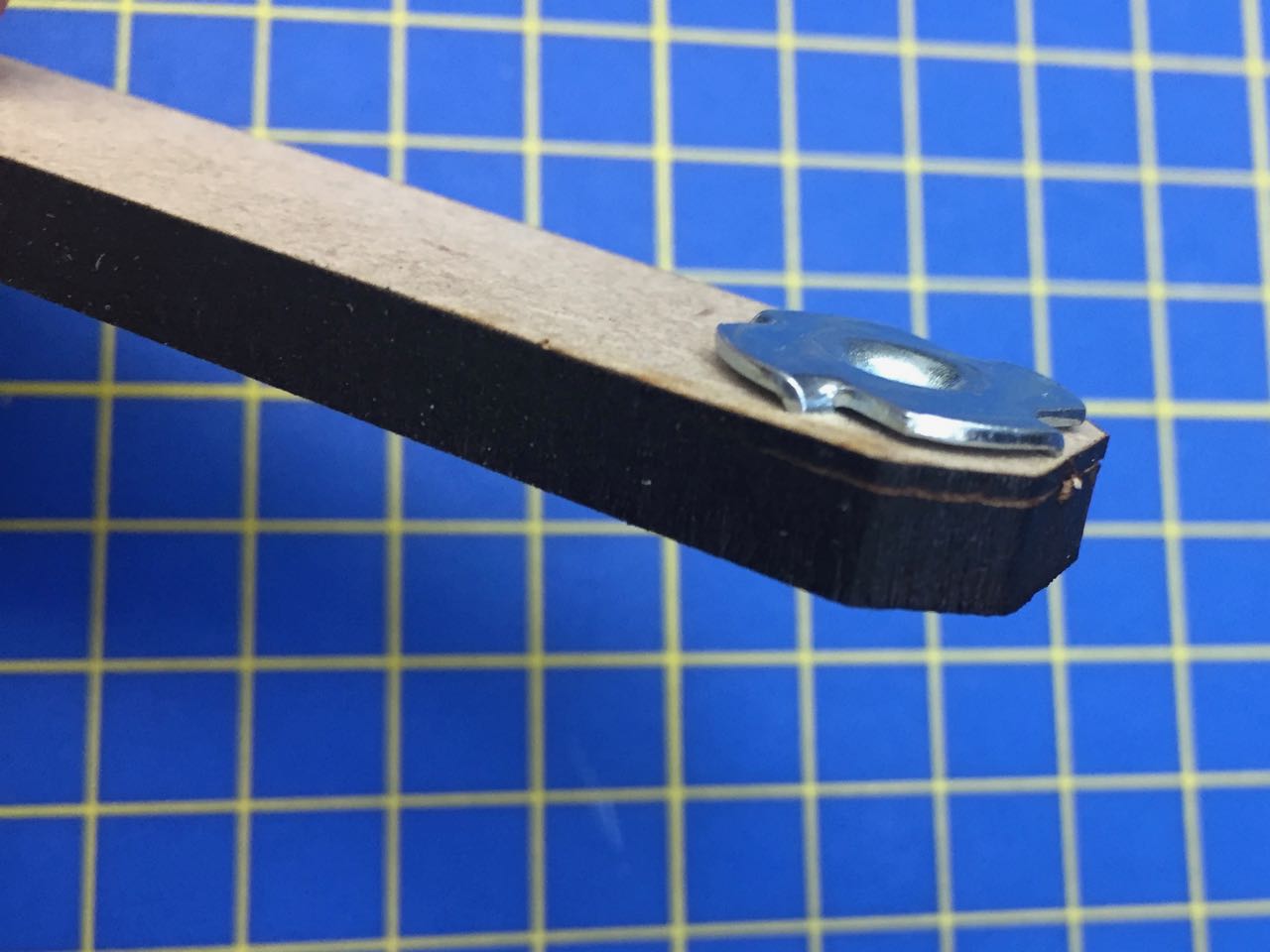 My next approach was to try mounting bolts into the backplate, which could be passed through the frame and holes in the front piece and then pulled together with nuts threaded from the front.

By using the engrave setting on the laser cutter, I was able to create pockets for the bolt heads, so that I could glue them in to stop them turning when nuts are attached. (Ideally you would use hex-headed bolts recessed into hexagonal holes for the best resistance against turning force, but I don’t have any of those to hand.) 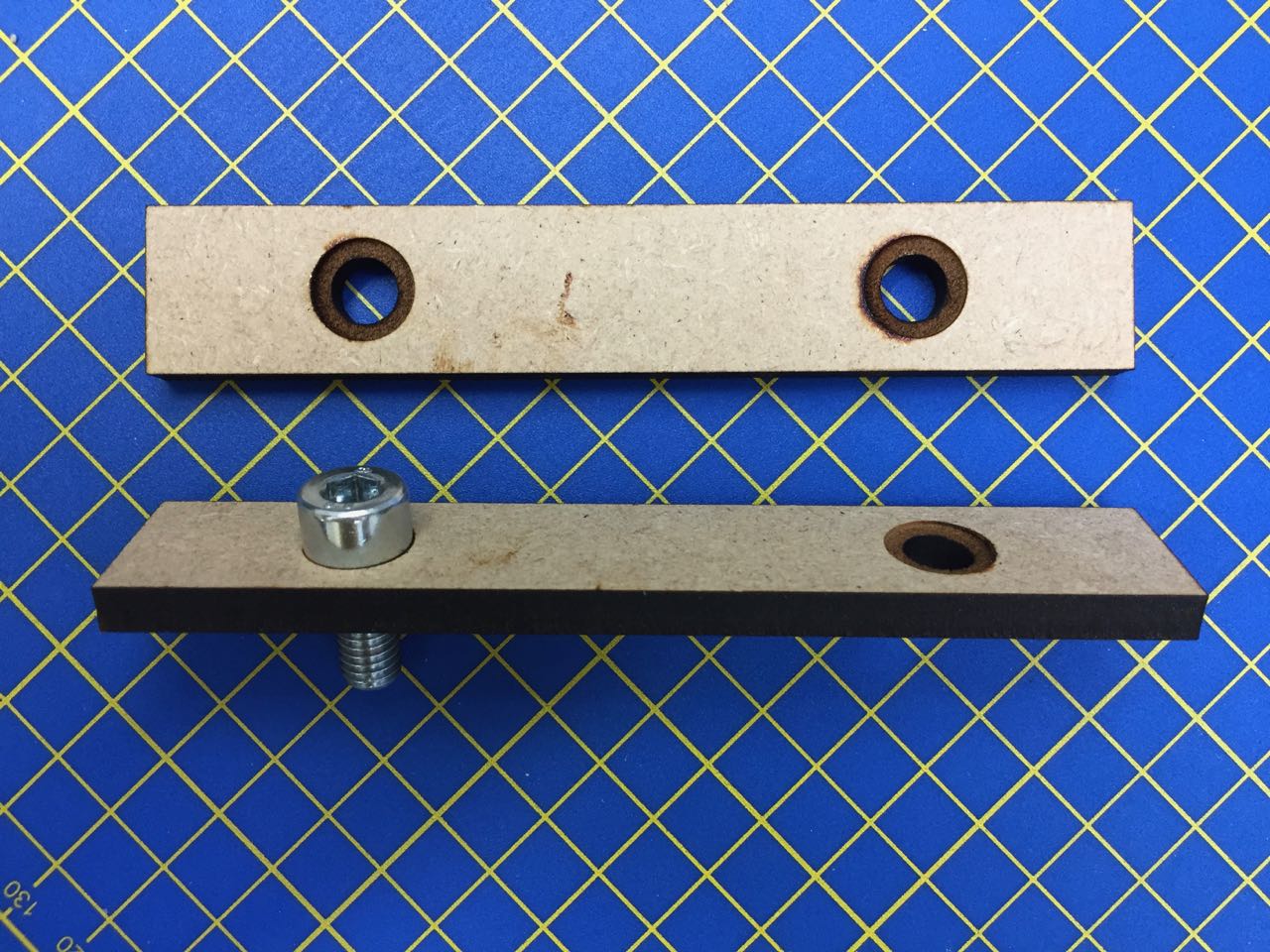 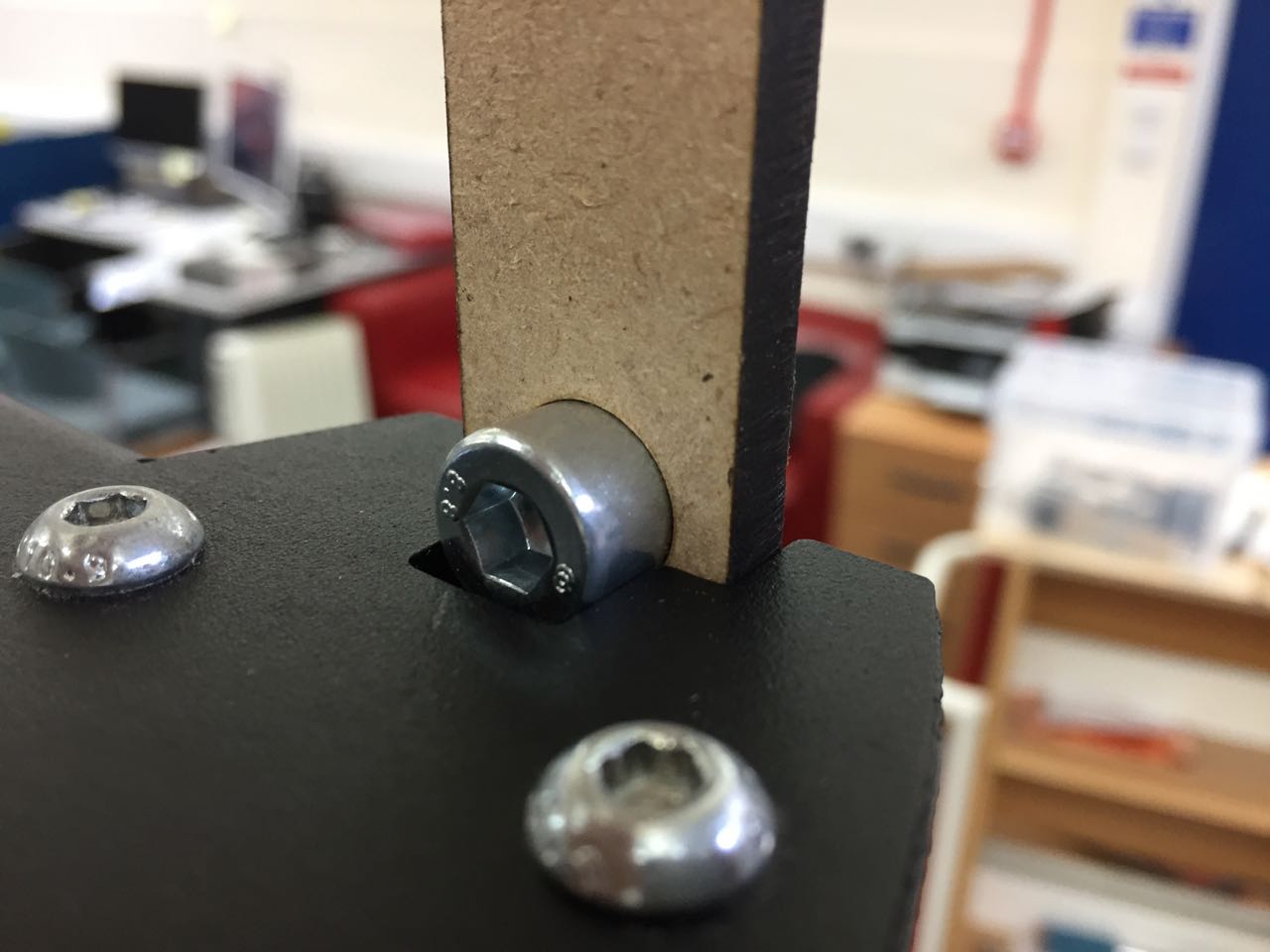 However, it turned out these bolt heads were too large to fit into the groove. So next, I tried using dome-headed bolts. The fitted better into the frame, and I was able to secure a heavy steel shelf onto these backing plates. 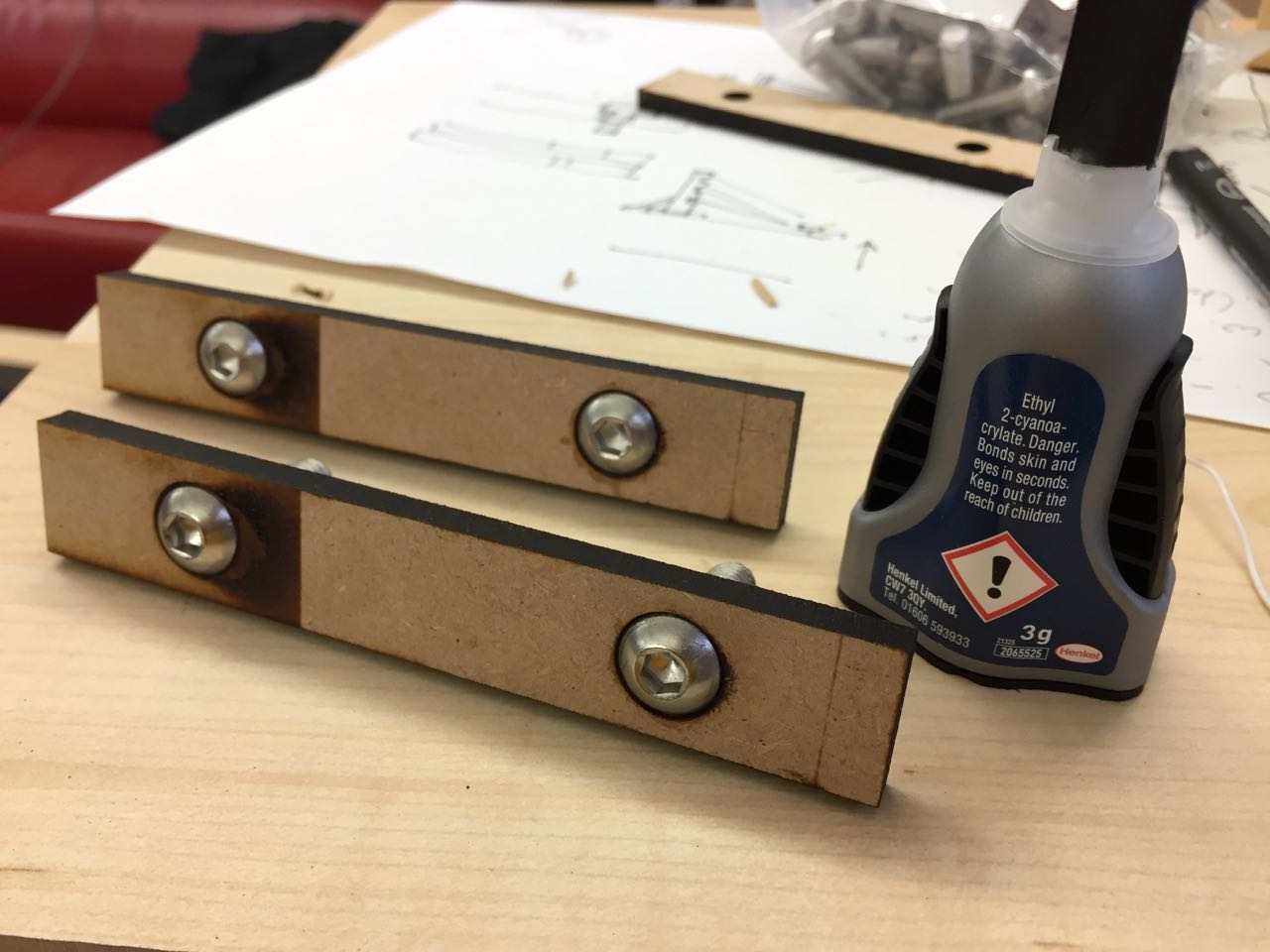 We figured we needed a cool name for our machine, and came up with Penguino, playing on the Arduino name, and the ‘polar’ in polargraph. I also like the idea of using an iceberg in the artwork to reflect the deep V shape characteristic of a polargraph plotter.

I made this in Illustrator:

This artwork uses Creative Commons-licensed elements from the Noun Project: