Factoring for real world, available bamboo stock and dimensions and mechanical and structural issues identified in virtual modeling, redesign of parts commnenced. After a week, parts are ready for actual fabrication.

Parts to be fabricated: 19 in all

Parts to be Procured:

While eventually, quality parts were printed, the process of 3D printing as part of our project workflow proved to be time consuming and inconsistent on outcome and final finish. Many failures along the way. A method to speed up the 3D printing of prototype parts discovered and applied, making the printing process much less time costly.

The bamboo stock is cut down to size, fire finished to harden, connection end dimensions normalized and natural joints shaved down and smoothed out to reasonable conditions.

We used the laser cutter to fabricate the primary “Y-Plate” that spans between the 2 Y-Rail assemblies. The Y-Plate serves primarily as a singular connector piece to which the Y-Ball Bearing Assmbly, the final set of spindles, and the X-Rail Assembly are attached…and also as a path guide for the X-Ball Bearing assembly.

We generated the model of the Y-Plate in Fusion 360, projected an image, exported the image as a DXF file…which we used in Adobe Illustrator to prepare the final image to cut on the laser cutter.

We cut 2 pieces the Y-Plate out of 4mm MDF board, with the intention to stack them into a 10mm final plate. The process went quickly and smoothly.

I made a rapid prototype of Rack & Pinion mechanism using laser cutter at week#15. However it was not so firm that I had to support it manually during moving. So I designed the integrated one using 3D printer. 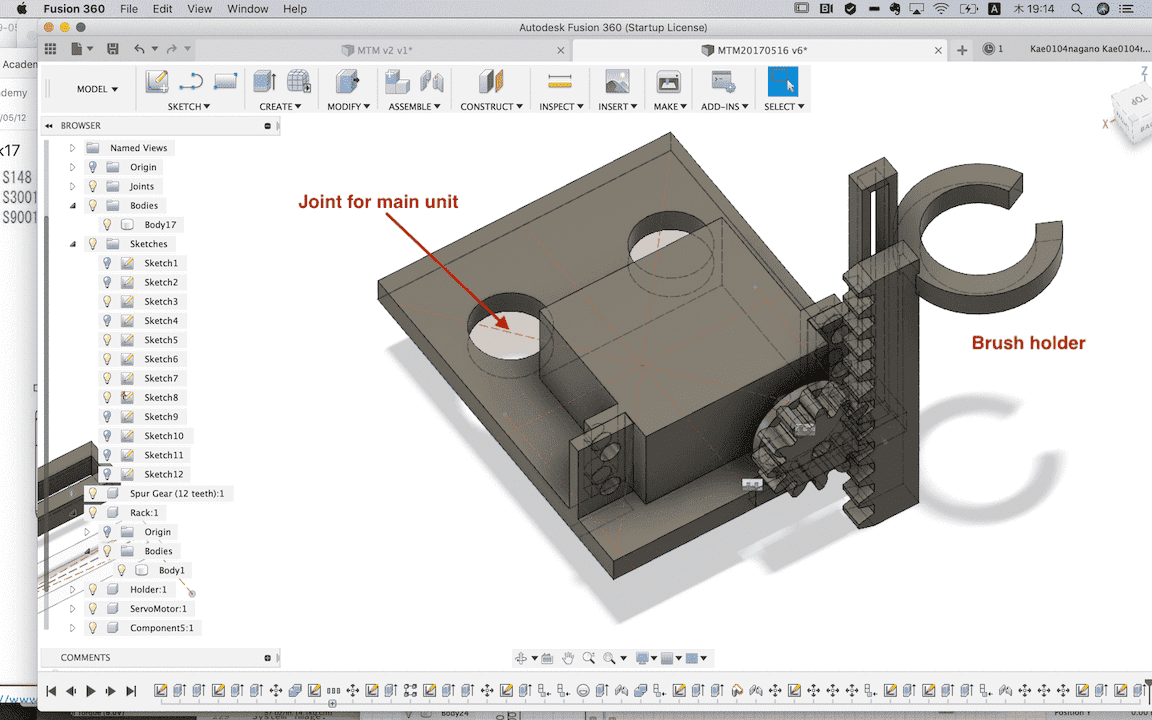 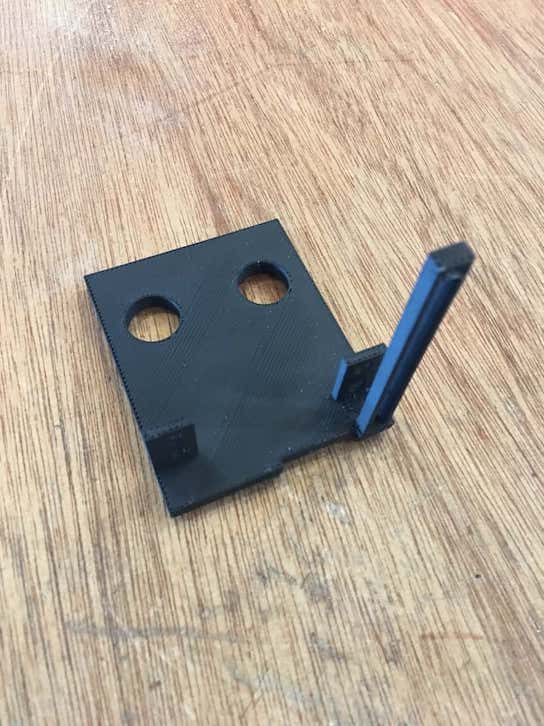 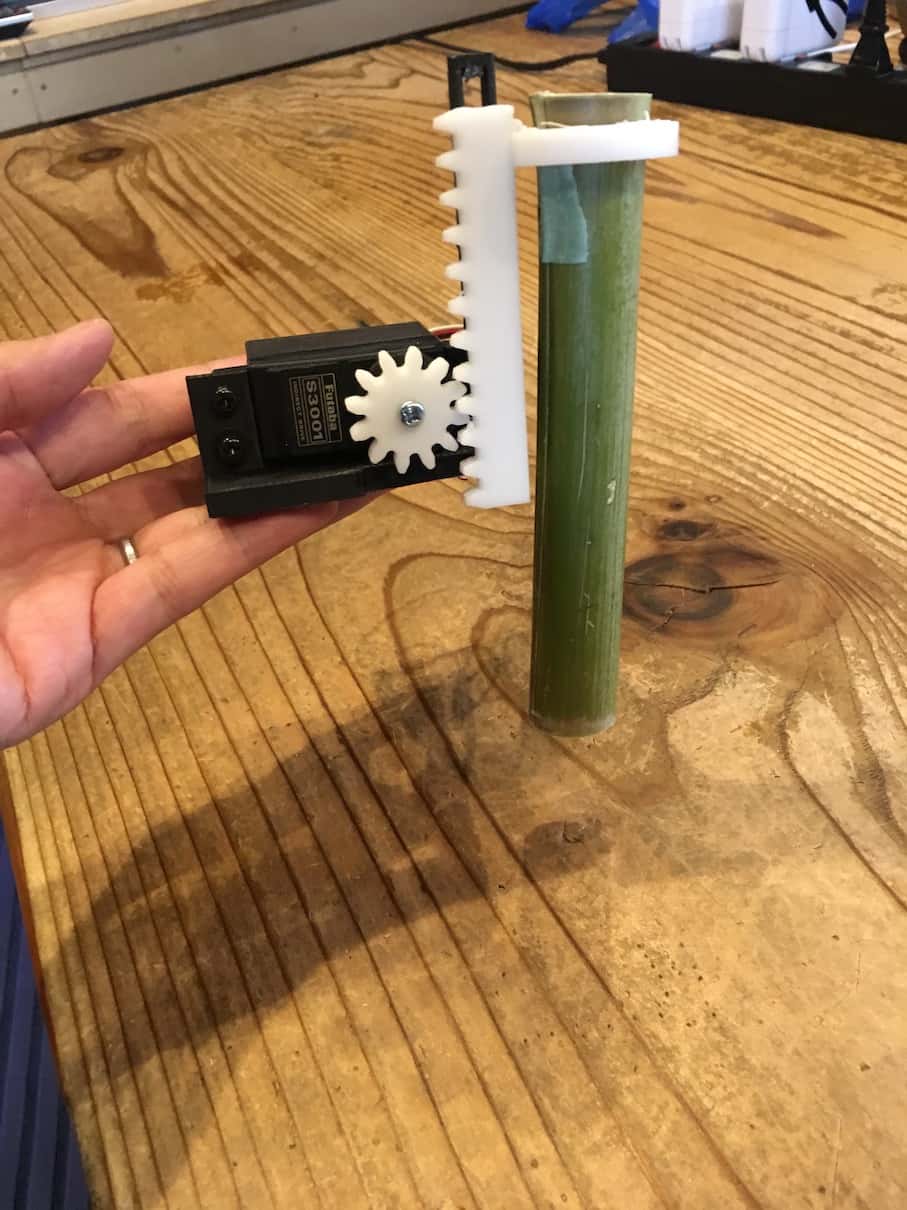 As the up and down movement was not steady, I designed following guide to attach beside the rack. 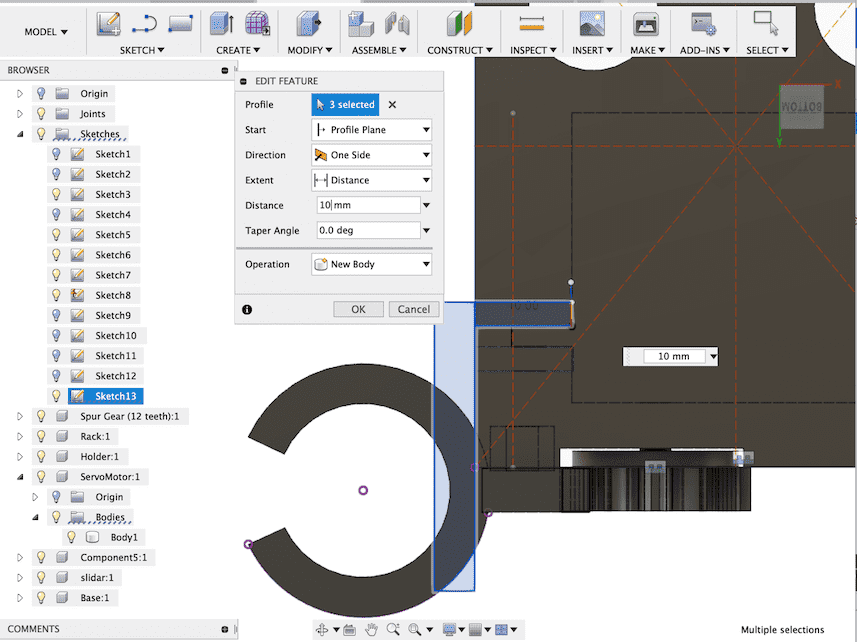 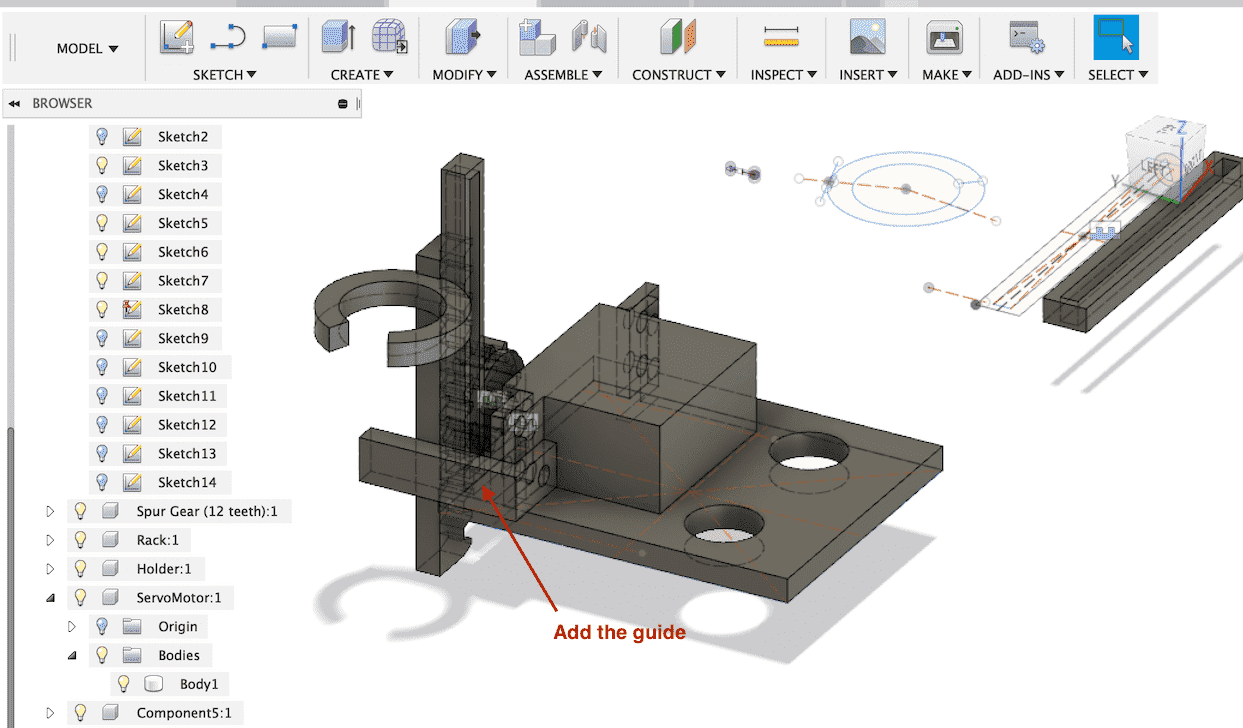 While drawing, the lower part of brush swung horizontally. So I attached additional holder at the bottom of the rack. 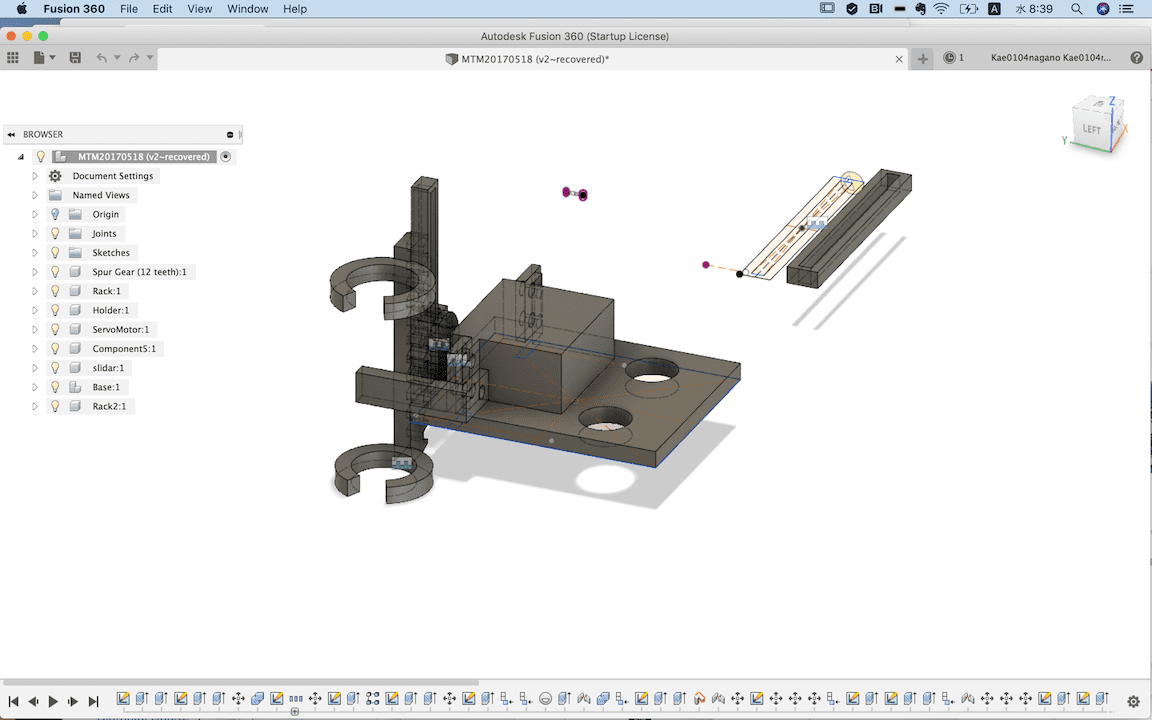 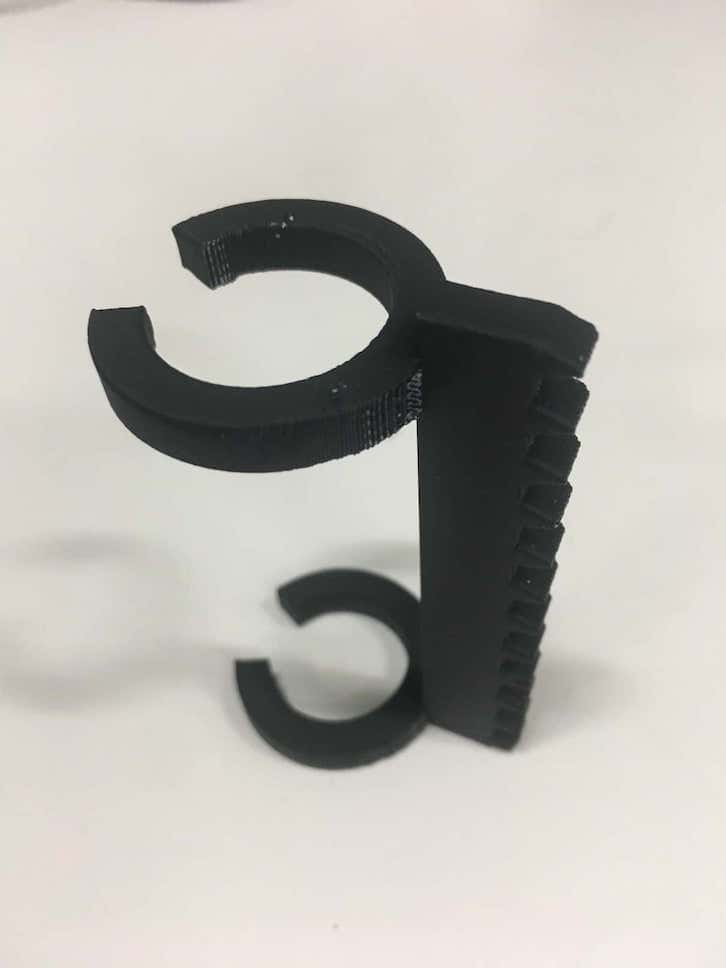 This week, I continued my study about Core XY and learned about G-Code for getting konw how to generate the data of characters that we want let machine write. First, I read the Core XY program based on Arduino and find out what functions are included. Then, I studied about G-Code, how to generate G-Code data and simulate it. Moreover, I studied how to develop interface application for sending G-Code data to the machine.

Opening serial monitor of Arduino (connecting to Satshakit that Core XY program is installed), we could find the following menu.

Basically, we send these command to control Core XY machine, and each functions that corresponded to each commands are defined in the Arduino program. In the main loop, the following code detecting which command are sended via serial port.

We need to generate G-code that Core XY machine draws. What is G-Code? According to the Autodesk page:

G-code is a programming language for CNC that instructs machines where and how to move. Most machines speak a different “dialect” of g-code, so the codes vary depending on type, make, and model. Each machine comes with an instruction manual that shows that particular machine’s code for a specific function.

Seeing inside of G-Code, it is a plain text file and each line consisits of command sets and position data like the following:

I learned the basic grammar of G-Code from the webpage at Make:. My week 17 assignment page summarize some of basic G-Code grammers.

Generating G-Code of Characters - How to.#

Generating G-Code itself is easy task. We can use Inkscape with intalling a plugin. 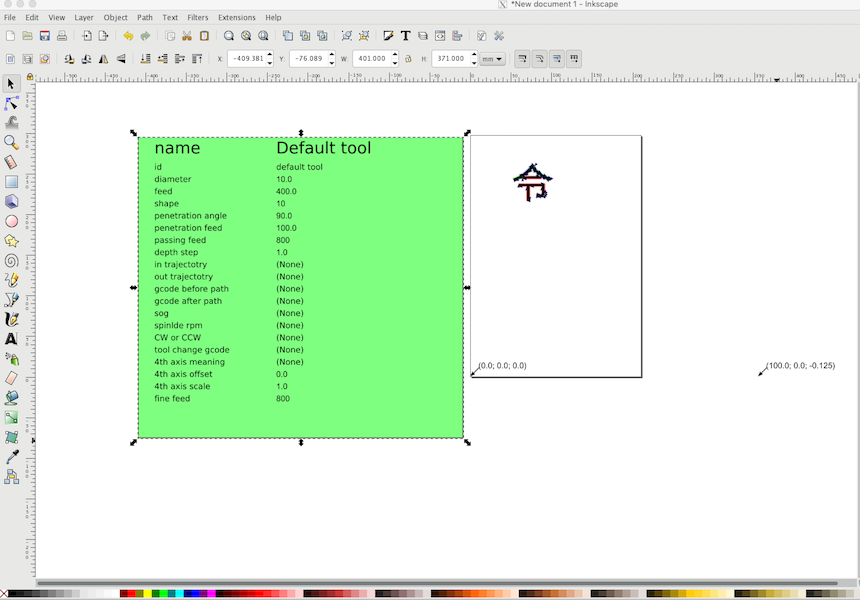 There are two problems I could find for generating G-Code by Inkscape.

Problem of Text-Font based character.

Therefore, it is better to draw the path of the character with using “Draw freehand line” tool like the following. Drawing the line by stroke order, Inkscape can generates G-Code file that considered it. 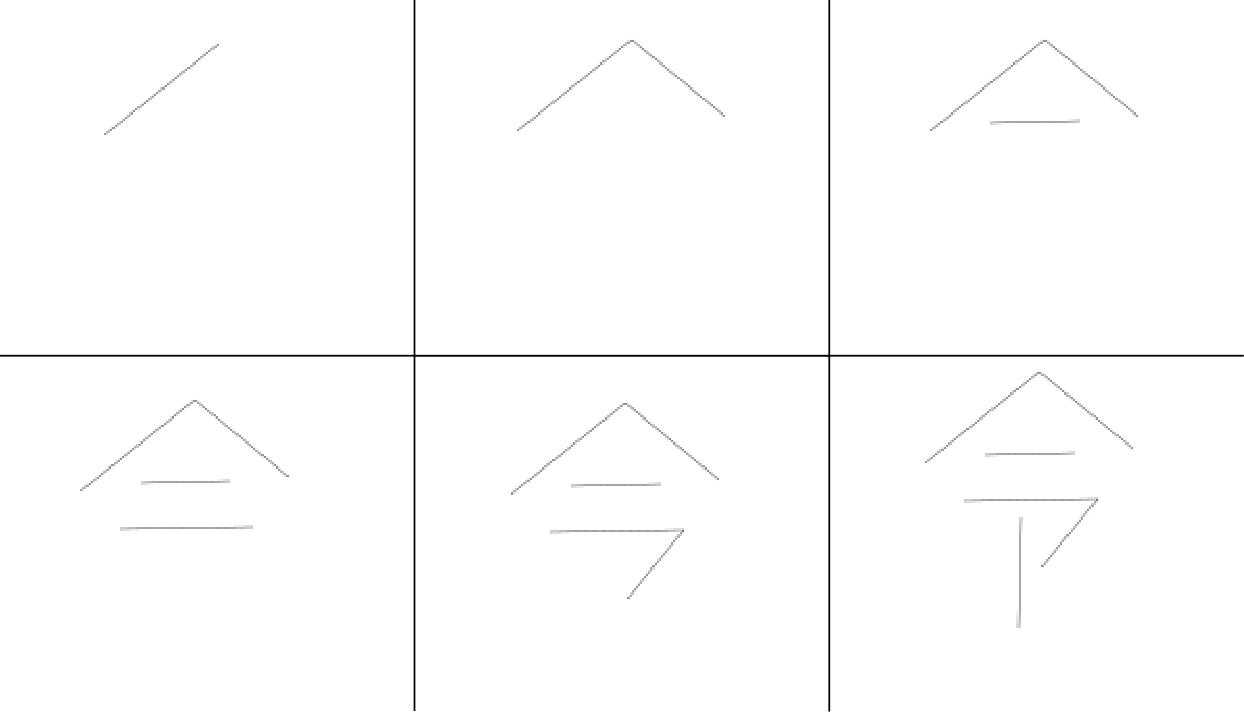 As a result, the output of the character became mirror writing. 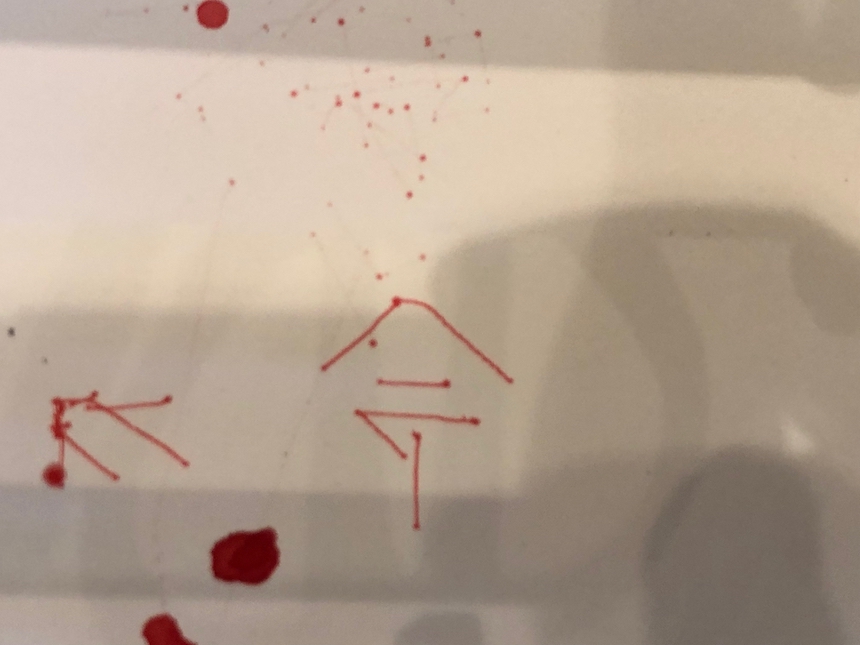 Therefore, I fliped the path veritically each path and generate again. 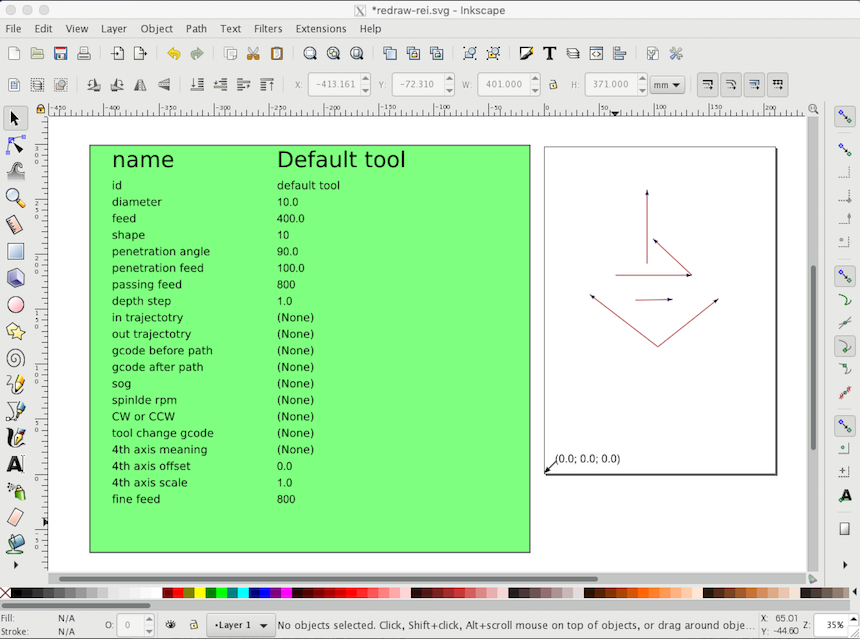 To send an original G-code file data that I generated by Inkscape, I used CNC Gcode Sender, based on Processing program.

operated reasonably well. Some issues arose which will be addressed with redesign before Wednesday final presentation. Structural rigidity, belt tension management, and excessive ‘slop’ are the biggest issues to be solved.

The End Effector (Kae)… The rack and pinion mechanism appeared to work well when it was operated individually. However, when it was integrated into the machine, I found that the bottom of the brush swung horizontally while drawing. So I designed an additional holder at the bottom of the rack for the final machine, but the problem was not solved completely. For future development, we should change the holding position of the brush downwards to reduce the swing, and should improve the design to keep the rack more stable.

The Control Program operated well. However, there are a couple of things we should consider to controle core XY. First is G-Code. G-Code is an essential factor to control as we want to write (or cut). Usually, we use some softwares or plugins to generate G-Code, but if we really want to control accurately, we should read generated G-code and add/revise it.

Also, we should consider the relevances between mechanical design and controlling. This time, we used bamboo as main material of the machine frame. But, the bamboo is sticky and joints made by 3D printer were sometimes catched up the bamboo frame. On the other hand, G-Code would be read, then send the data to the machine. In the end, the characters that the machine draw would be failed. It should be implemented some basic functions to stop the machine quickly when the trouble occur.

This a video to introduce our MTM project result.

The Kura BPM worked in the end…but not really to everyone’s expectations. The control program seemed to work very well, but the End Effector could be made to be more robust and hold the brush more firmly, to improve the painting results.

But overall we achieved the objective of sourcing local, sustainable materials to be meaningful in the machine construction. We also succeeded in combine some traditional techniques with technologically advanced ones.

In that respect, there is an opportunity to create even better, straighter rails with bamboo…borrowing from techniques utilized by Japan’s tradtional archery arrow makers. In Japan, there remain craftsmen who are expert with the techniques to make bamboo arrows for use by traditional Japanese archery practitioners.

A video going into detail about this still living traditional arrow making technique is here. What these craftsmen can do…is to straighten small diameter bamboo rods…using heating and bending techniques.

It is my thought that the precision of machines built with bamboo rods can be improved if we are able to apply this technique.