Let's start with the fact that I have been working on photography and video processing semi-professionally and amateurishly for over 15 years. Quite a lot. I have used a lot of software and unfortunately I always have the same problem with all sliders and samplers, that you have to be very precise and have a lot of patience to choose the values exactly how you want them. Some time ago I had the pleasure of working on professional equipment for thousands of dollars to edit video with real sliders, buttons, knobs and so on. Feelings from work were incredibly better. So as always, I started looking for alternative options. I found on the Internet the idea of connecting midi controllers and then mapping the keys with the program. Unfortunately most people work with midi controllers for music so they are usually big and uncomfortable and it's hard to put them in a backpack to go to a client or another city for sessions and take pictures quickly and conveniently. Below I present my thoughts on this project and some initial sketches and ideas.

My project is a manipulator for graphics programs aimed at helping all those who have already had enough of millions of keyboard shortcuts and clicks. The basis of the manipulator is midi communication hence the name MIDIPULATOR! I chose this way of communication because I knew that there are many applications that use midi as a simple system for communication. Moreover, I was inspired by the videos on yt, where people used midi controllers to edit photos. Unfortunately such a midi manipulator is quite clumsy and at best it requires a space as much as a keyboard. So I came up with the idea that I will communicate using midi. Then I had to find out how such communication looks like or what midi is:

The MIDI language is used to transmit real time information for the playback of a piece of music. "Real time" means that each message is sent exactly at the moment it must be interpreted by the target synthesizer (which can be a hardware synthesizer or software synthesizer). Various messages are defined to transmit the information needed to perform the playback of music. The important point is that the MIDI language does not define the sound itself, but only the sequence of instructions to create the sound in the target synthesizer. The MIDI messages are sent as a time sequence of one or more bytes (8 bits). The first byte is a STATUS byte, often followed by DATA byteswith additional parameters. A STATUS byte has bit 7 set to 1 and aDATA byte has bit 7 set to 0.

Thanks to this description from MIDI Association I started to understand what this whole midi is about. 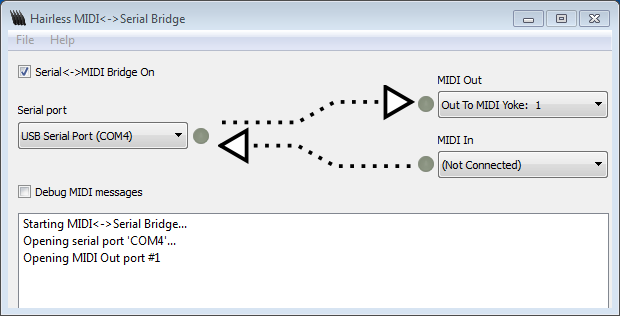 I used Controllermate and Hairless midi serial to take over the signal.

Controllermate
ControllerMate for Mac gives you the ability to customize various devices, including the keyboard and mouse, joystick, gamepads, and more, for use with your computer. With a bit of experimenting, you can create all kinds of automated processes to streamline tasks.

Then I selected the components I'd need and the functions I'd like to use in... and here's the problem, because not all programs use scripts. But that's in a minute. First the hardware.

I knew it would work, but I had to see if I could find an old midi controller, which surprasingly had an usb. Using the controllermate I started to add specific buttons and assign them functionality and here comes APPLE SCRIPT, which, as I found out later, could be replaced by java script, but that's already with version 0.2 :)

AppleScript is a scripting language developed by Apple to help people automate their work processes on the Mac operating system. It accomplishes this by exposing every element of the system's applications as an object in an extremely simple, English-like language. AppleScript is to the Mac OS as JavaScript is to browsers. And here we go back to the scripts and to the program I chose as my test object, and that is photoshop to the total at the moment only he has a decent documentation to handle this language:

below are a few examples that I've used and edited for myself: