Two weeks ago, I designed and made a version of the Hello Echo board. This week, I will be making it do stuff using the C programming language and Arduino IDE.

☑ Read an AVR microcontroller datasheet
☑ program your board to do something, with as many different programming languages
☑ Document the programming process

☑ extra credit: experiment with other architectures

The documentation for Atmel’s ATtiny44A MCU is a whopping 286 page pdf. I dived in to find out what the chip can do and how it works.

I learned that so many information about the product is included in Data Sheet. I could not understand as I expect, but I found some information related this week assignment which used C programming. 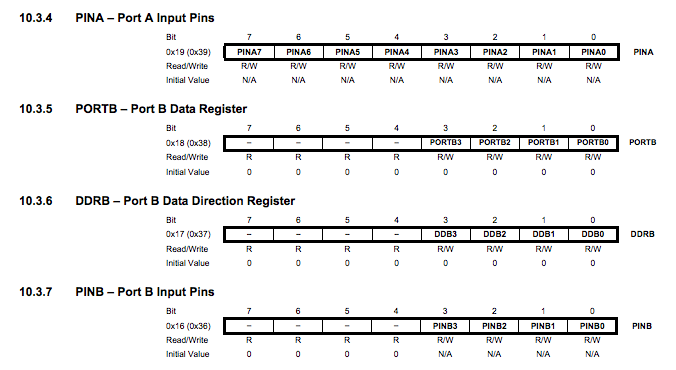 Datasheet There is really a lot of information in the rest of the datasheet. Too much for a beginner like me to actually get into unless I know what I’m looking for. The Pin Configuration and Pin Descriptions in Section 1 are important - PighiXXX has created very nice colour-coded pinout diagrams for many processors including the ATtiny family, including pin mapping for the Arduino IDE: 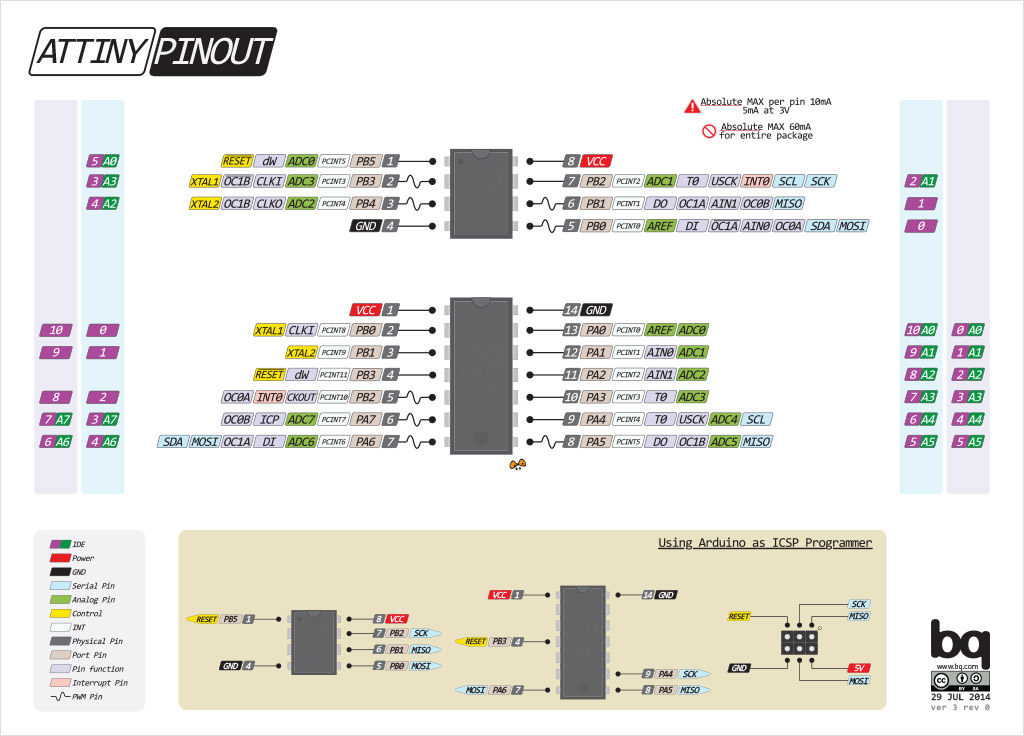 My first step was to make sure I had the necessary toolchain for programming the chip -avr-gcc and avrdude.

Now I could go ahead and program the microcontroller. As a first test, I downloaded Neil Gershenfeld’s hello echo example C and makefile code, and followed this tutorial to compile the code, set the fuses and program the board.

With both the C code and makefile in my root directory, I compiled the code:

then setting the fuses, to set the clock to 20MHz using the external crystal:

.hex and .out were made.

and programmed the microcontroller:

Neil wrote this python program for serial communication and can be downloaded from the class page. term.py

I move it to the same folder as everything else. Then run "term.py" from terminal.

Before using the program we need to make sure that we have all we need and pythone is working on our work station.

and move to the folder.

To get serial port information

As Neil discribed in the class, we can devide the Arduino into five major parts. The IDE, library, hardware, bootloader and a header.

A bit of setup is needed before you can program an AVR microcontroller with the Arduino IDE. Following this tutorial from MIT on hightechlowtech.org, I installed the ATtiny board extensions for Arduino, and set my configuration under for programming an ATtiny44 using a USBtinyISP and use the bootloader to load the program.

Bas made a really nice preserntation on programming with Arduino IDE. This post by Mayank on maxembedded.com was also helpful.

Adding the Attiny board from the board manager

Now you can find the board from the board manager

Adding the Attiny board from the board manager

We need to set the programmer to our ISP programmer

Set the programmer to be the USBtinyISP

After that I wanted to check how the fuses were programmed. I used this online fuse calcultor in order to see which are the possible values you can modify with the fuses. In addition, I read the section 19.2 ATTiny44 data sheet in order to understand the meaning of the different bits. Please note that programming a fuse bit, means to put it to 0 and unprogramme it means put it to 1. With the fuses you can select, among other, following settings:

I left the rest of the values to its default value. Inserting the values from the this online fuse calcultor , I got the following values for the fuse bits to use in the avrdude command:

Note that according avrdude documentation it means:

Pinout of ATTiny 44a for Arduino IDE. Pin numbers are marked in brown. This image was obtained from: pighixxx


I then created the following sketch to make the LED blink every second. Note that I am using, in this case the internal clock. To that end I setup 8MHz in the Tools > Clock and after that Burn the bootloader to modify the fuses.

The code worked and the LED blinked :)!! I am very happy now.


I then created the following sketch to run the code to turn on the LED just when the button is pressed and stays on for 2000ms running on internal clock at 8Mhz. On my board I have a pull-up resistor for the LED So I don't have to use the internal pull up. The code I run was the following

Programming with Arduino was much more familiar and faster for me, and the code was a bit neater as I could specify a variable for the delay time.

PROGRAMMING AN AVR IN C

I was able to compile my code and program the microcontroller with:

Let there be light!


Next, I tried making the LED blink:

and then, used the button to change the LED blink speed:

For each iteration, I created a new makefile with an updated project name to make the filename.