My 1st Idea for the Final Project

My project is to build an open-source device that follows the same logic as Fab Labs’ Smart Citizen initiative, but, instead of capturing hard data about the environment, crowdsources soft data from the citizens and gathers highly localised feedback on any topic. 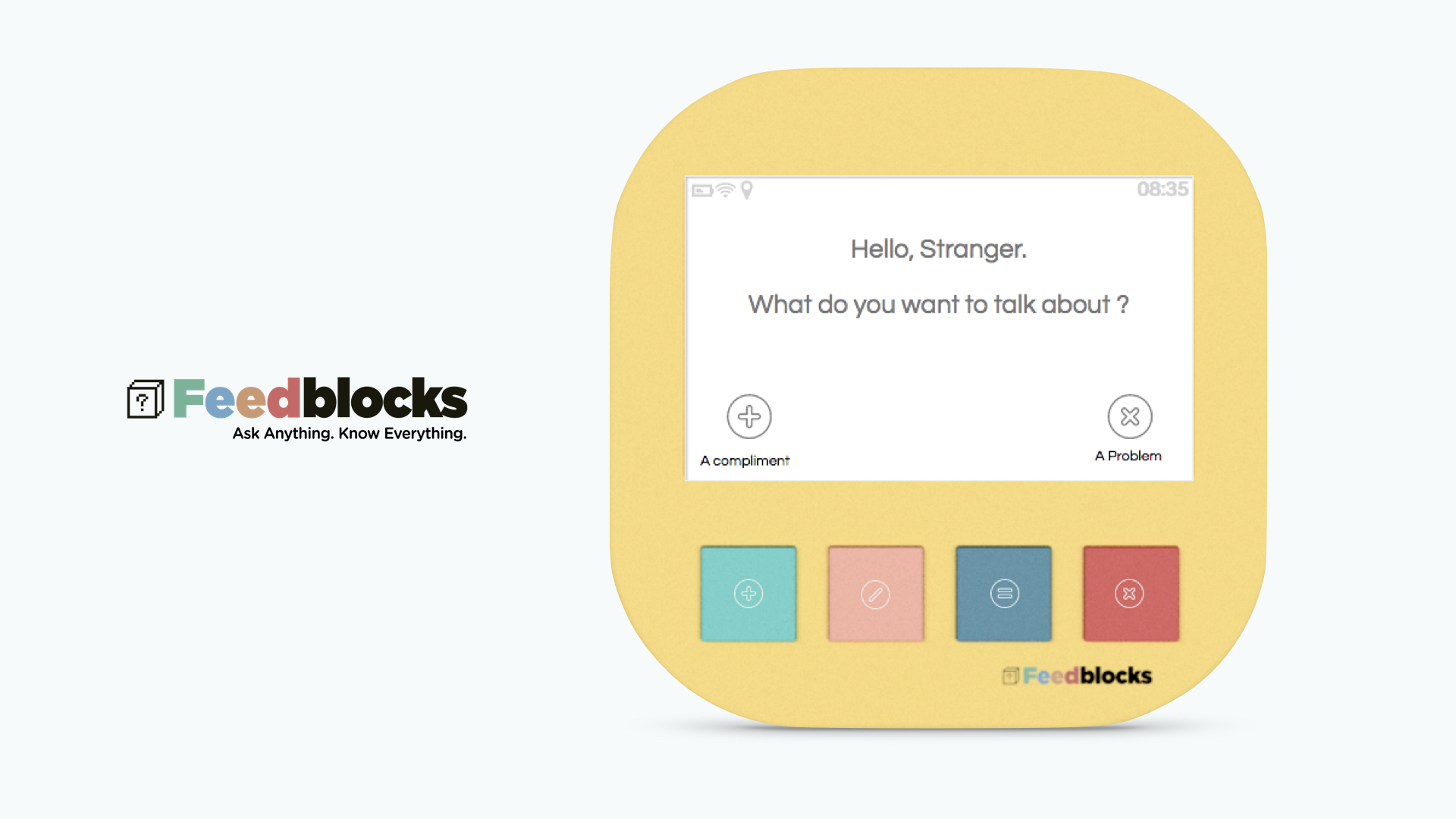 Smart Citizen Sensors are made to capture and distribute environmental data about temperature, humidity, light, sound, levels of carbon monoxide and Nitrogen Dioxide, among others. But after that data is gathered, I believe there is little that the community itself can do with it.

I suppose mostly researchers would use the data for studies that would, ultimately, sustain the development of products or solutions, tailor made for that community in the future, which is already great. But I would like to build up on that concept and do something that would improve interaction between the, let’s say, subject and researcher too.

The plan is to fabricate an open-source and low cost terminal that allows citizens to crowdsource social sentiment and gather feedback/soft data about any topic. Data gathered would be published in an open platform so that authorities, media and citizens could monitor constantly and use it for improving public services.

Governments or private companies could also use the terminals to ask any question and receive highly localised feedback.

How does it work? 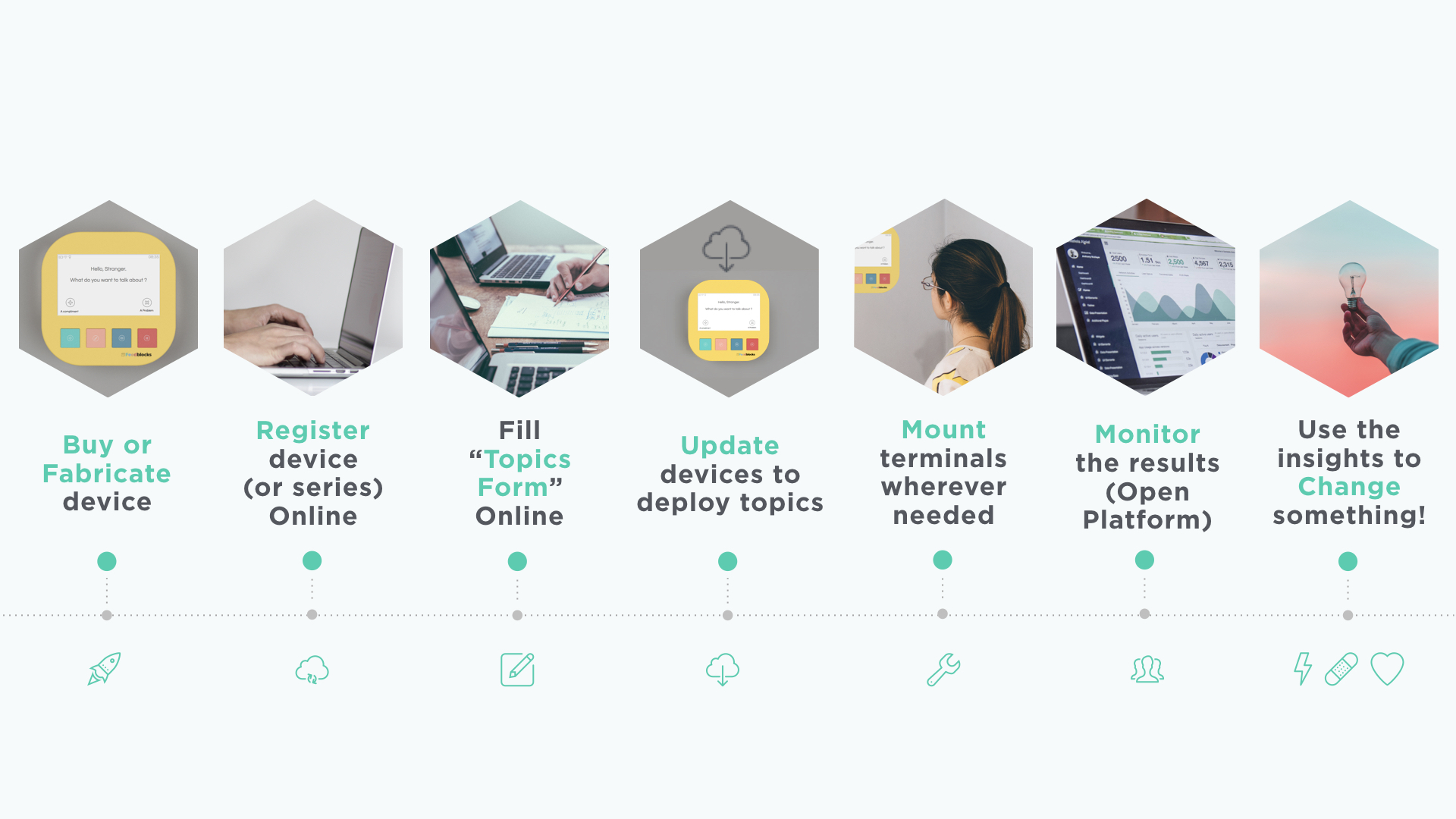 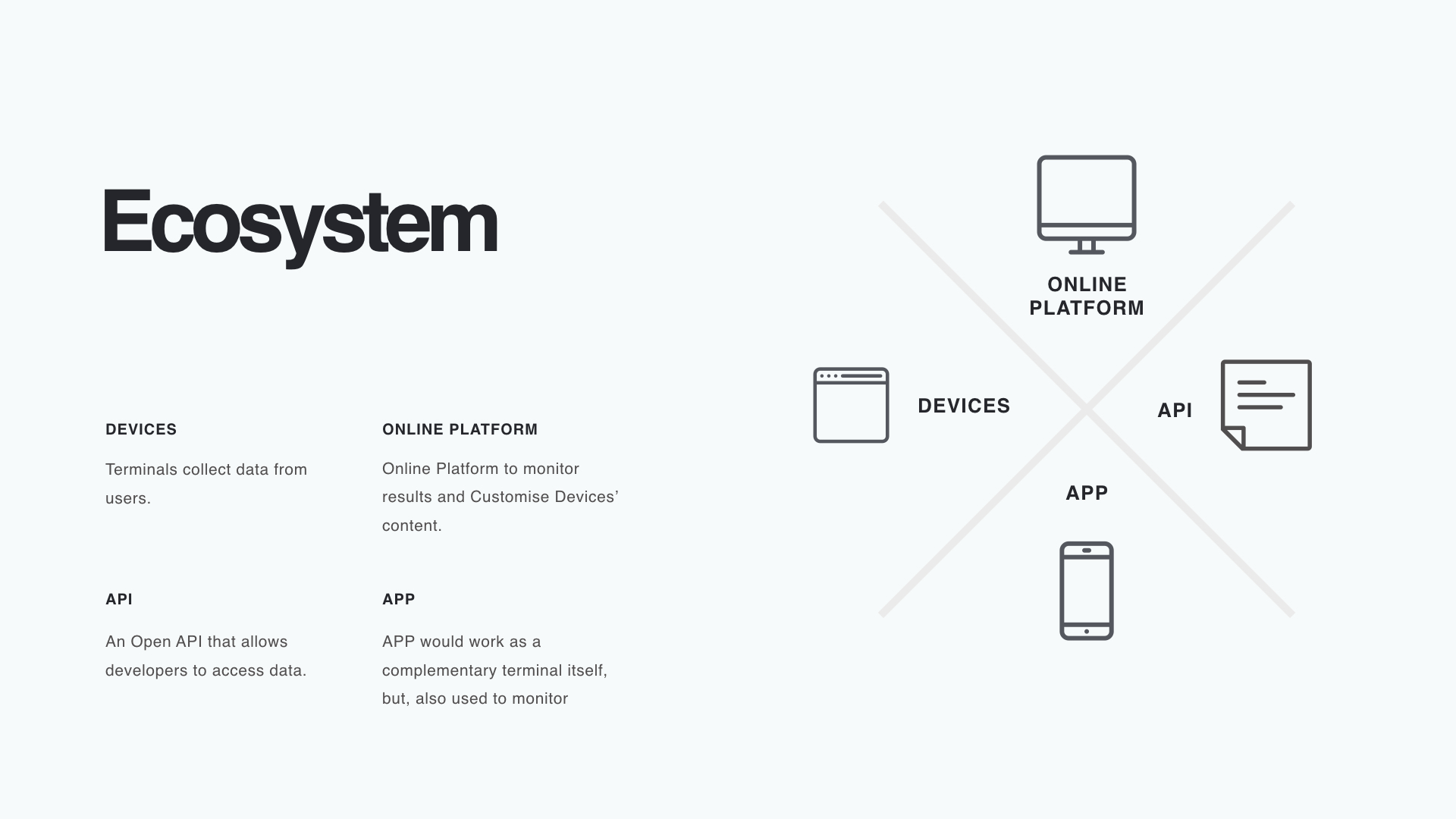 When was the last time you talked to your government?

Communication between government and citizens is usually inexpressive or inefficient. Most citizens only talk to governments in the form of voting (once every couple of years at most) , when they require a public service or when they are too heavily disturbed by something.

Though there is surely what to say, communication is not simple nor convenient enough, everyone is really busy with their lives to loose the time. While government and society would profit from feedback and data collecting is vital to improving public services, the existing solutions are often costly or too focused on a purely online participation, what limits considerably its results’ scope.

The problem with believing that governments will support this initiative right away is that it implies in a somewhat commitment to responding to the data gathered. So, authorities would surely ask why would they create evidence about their own poor performance. Well, the answer for that should be simple: because they should perform and do whatever is needed to do so. Period. But, we all know it does not always work this way.

My belief is that, if the terminals are cheap enough to attract enough public participation, governments should want to appropriate and sponsor the initiative. The one that owns the terminals, is the one that chooses the topics that the terminal (or a series of terminals) will present.

A little bit of control, at a low cost, is better than no control at no cost. So, in a way, the idea is to use some sort of push and pull strategy here, by creating the demand, we might be able to force governments to supply.

Why not just an App?

An APP would be also designed as a supporting feature to collect feedback and monitor results, but, I believe ubiquitous physical terminals should be the main touchpoint for collecting feedback. Why?

“ A major shift is underway in technology, fuelled by lower costs, users’ growing angst about their “screen addiction,” and the disaggregation of core technology components, such as cameras, microphones, speakers and screens, which are increasingly being embedded in an array of different environments — especially in the home. From Airbnb to Amazon, Deliveroo and Alibaba, a growing number of primarily digital brands are now placing greater emphasis on physical presence while making the most of digital and data to improve experience. “ Fjord Trends Report 2018

Habit creation is key for this to work. In a far less manipulative and more playful way, it’d be fun to create a habit loop that works in favour of participation. Something like this (there will be an image to illustrate the loop below, working on it):

2 - Routine: It feels good to push these buttons!

3 - Reward: I did something for my community + I get an odd compliment!

Not only communities and governments could benefit from the spread of the terminals, but also, private companies could use it as a replacement for the feedback kiosks we see around. Instead of the limited - Depressed / Sad / OK / Happy / On Ecstasy - faces, companies could also ask more detailed questions or allow clients to be more specific about their frustrations. The quality of the feedback would be much better. Cost-wise, I’ve heard these Happy or Not kiosks cost around $ 100 USD as a first charge and then $ 50 USD per unit, per month, bundled with their online analytics solution, of course.

FeedBlocks could be used in different spaces and ask different questions. For an instance, no one usually calls a HOW-AM-I-DRIVING? kind of number, it too much of a hassle and somewhat embarrassing, but, through these terminals one could notify the transportation company directly from a bus, the exact location where a driver’s been disrespectful with a passenger or drove in a dangerous way. Or in a workshop/class situation, a speaker could gather feedback on the audience and adapt accordingly. Big companies that deploy minor actions that affect many employees, such as a change in location, for example, could use the terminals to capture spontaneous, anonymous and local feedback about it.

So, there might be a market for it too.

Some questions to be answered:

Last, but not least, after realising that my other ideas were way too audacious for the expertise and time I have, I thought this project would check all the boxes of the subtle recommendations I got from the instructors:

Apart from a little bit of skills on Design and UX, I have no previous experience in electronics, programming and many other skills needed to make it happen.
Let’s see.

Based on a Mind Map sketch I did some time ago here, I’ve now made a user flow wireframe at Hotgloo , so that I could begin to evaluate the UX and content. Here it is:

We never really know how safe is the tap water we are getting at home. Having lived in different countries of Europe and realising water not only looks and tastes different, but follows different regulations, only made me feel more insecure. Bottled water is as unregulated as tap with the disadvantage of being extremely harmful to the environment. Regular filters do change the taste of water but, still, no one is really secure about what they are consuming, specially if you have children at home. Water tests are either made by laboratories (meaning you have to send the samples) or DIY tests sold online sound somewhat complicated and limited. Both options don’t sound very convenient as for the testing process, but, what’s even worst is that, after having the results, there is no information on what to do about it.

A single-piece, design-driven home water test kit that provides a general overview of your water quality, by pointing the presence of contaminants that might be harmful. + A water filtration kit (bottle/jar + filtering unit + safe chemical “nibs”) that you can use to “correct” some of the problems your water has, based on the test results.

Why Not? Too much knowledge on chemicals required and I don’t have enough expertise. FabAcademy neither focus on that type of knowledge and would have to learn not only everything related to fabrication , but also, chemistry.

Having gone through several construction works, both personally and professionally, I’ve always found hard to visualise and correctly evaluate space definitions on plans. Also, communication between architects, clients and constructors would aways be a pain point and for many times walls have been elevated in different positions than required, due to communication problems. The usual solution would be to do a line stripping on the floor but it would require lots of work to a mere “approximate” result.

A robotic floor printer (like a roomba vacuum cleaner) or a drone floor printer (able to follow a precise path autonomously, connected to a pump feeding paint through a plastic tube with a sponge on the end) that uses a temporary paint to draw precise auto CAD plans (from .dwg files) on the actual floor of construction sites. It would help architects and their clients to better visualise their drawings and evaluate space definitions and help workers build up walls precisely.

Why Not? Though it’s an interesting idea and fun to play with (specially with the help of IAAC alumni) I would need to reach a prototype rather than just a PoC, and it would require much more time than what I have available.

Not every subway station has elevators and it’s quite a challenge to navigate public transportation on your own with a baby stroller. I’ve found myself many times carrying the stroller on my own through several steps to reach a subway platform, at the very high cost of hurting my back. Searched online and couldn’t find any solution for this, other than a physical ramp like this, ditching the stroller altogether or simply avoiding subway transportation.

A helping hand. A one point support system based on a rotating wheel covered with flexible silicone “handles” full of magnets (with an auto ON-OFF) that would grip subway handrails and provide a leverage when going up or down the subway stairs.

Why Not? It’s literally just an idea, I haven’t really thought on how to make it work.

This work is licensed under a Creative Commons Attribution-NonCommercial 4.0 International License.